Incident and Evacuation at 3000m 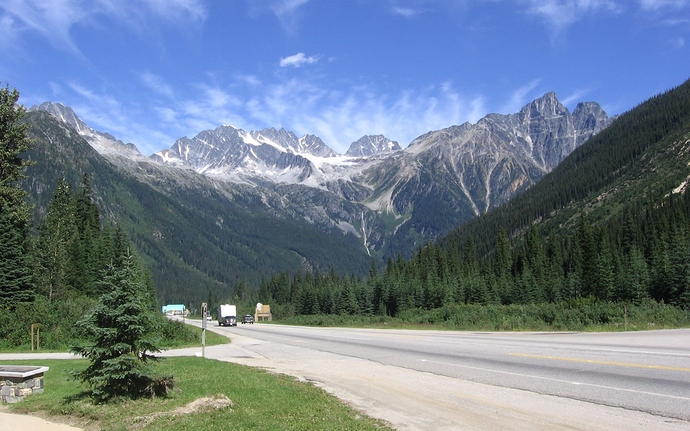 A couple of weeks ago a few friends and I made an attempt on Mt. Rogers (3168m) in Glacier National Park, British Columbia (VE7). We came within 100m of the summit when we reached our turnaround time and had to begin the descent. I never even had a chance to pull out my FT-818. At around 3000m the toe piece of one of my ski bindings ripped out and I went for a tumble down a steep piece of glacier. Fortunately I was able to self-arrest and there were no injuries, but my ski was unusable and I was far from the parking lot. 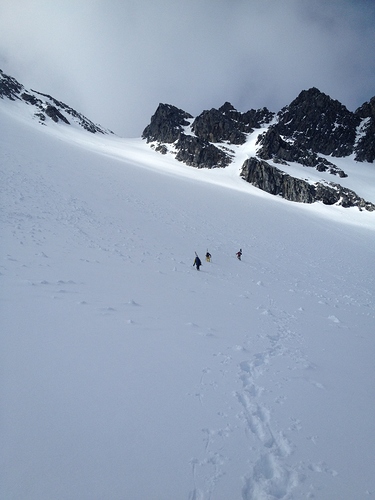 [The head of the Swiss Glacier and last 400m of climbing to Mt. Rogers. I fell just below the rocks on the left, where the light meets the shadow.)

At this point I had several options.

Options 1 and 2 were not feasible because of the permit system in the park (out by midnight) and an absence of cellular service, respectively. Option 4 would have mobilized a large number of people, including public safety officers, and seemed like an inefficient use of resources. I chose option 3, and my group was subsequently plucked off a low-angle section of glacier by helicopter forty five minutes later. Because being stuck in restricted permit areas after midnight is considered an emergency we were not charged for our flight and only had to fill out an incident report the next day.

Being able to contact the Parks dispatcher directly allowed us to describe the situation calmly and the proper response to be selected. It also meant that I didn’t have to move to a location where there might have been line of sight to a cell tower. Cell phone is the preferred method of contacting the dispatch center, however the day was marching on and many local helicopter operations have policies in place that prevent flights from leaving without at least an hour before sundown.

Regrettably, VHF activity outside of larger population centers in VE7 is not common. There are no amateur repeaters in that part of the Selkirk range, and even the repeaters in the closest towns remain mostly silent. Non-amateur systems, like those run by National Parks, Transport Canada, and the Forestry department represent the most robust voice communication system outside of the cellular network or satellite services. As a result, many people (amateurs and non-amateurs alike) carry radios with these frequencies programmed in case of emergencies.

This incident is a good example of how a frequency agile radio can be useful in speeding up first response and evacuation times. Even though there were no injuries, a delay in contacting emergency services could have resulted in a night out on the glacier and/or a long walk out in the dark. On glaciated terrain at those elevations hypothermia and poorly bridged crevasses are very real hazards. This capability is certainly worth the extra weight.

A full trip report (and more pictures) can be found here: Summits and Radios blog.

Glad you got out OK and your VHF helped!

The Swiss have a similar system run by REGA.

Thanks for the report John. It’s a whole different league from what many of us are used to and is very interesting. No doubt you had other words in mind at the time!

In your full report I thought you were describing the pass where the railroad ended up as a spiral inside the mountain, but I see that is further east at Cathedral Mountain. Still, you’ve got to take your hat off to the pioneers that navigated the railways across these mountains. Absolutely spectacular.

Please let’s have more reports from VE7 (and VE6)!

This capability is certainly worth the extra weight.

Hi John,
Did you have a separate radio for the Parks repeater as you refer to extra weight. Elsewhere you refer to a frequency agile radio, so I thought you were using your amateir HT out-of-band to contact the service?

This would be a good article to submit for the May SOTA Newsletter.

I bring a commercial VHF/UHF HT that transmits on 134-174Mhz and 400-480Mhz, as well as an FT-817 which transmits on the 2m/70cm amateur bands. There is some redundancy for amateur bands, but only the HT is capable of using other frequencies. The Canadian licensing system allows for frequency agile radios that meet or exceed the standards for amateur transmitters to be used on amateur bands, provided that the user holds the correct amateur license class.

This is certainly something I could submit for the newsletter, should I just email Fred K6DGW?

Hi John,
So the cheap Chinese HTs that cover these frequencies would also work. I think in most countries, if you have an advanced/extra/top level Amateur licence you are allowed to have equipment that can operate out of band and are trusted only to operate on frequencies that you are allowed to however my understanding is that at least in some countries, those holding an entry level “foundation” licence are not allowed this priviledge - however in an emergency situation, I would hope this rule would be ignored.

Here’s the contact information for North American submissions to the monthly newsletter (you might want to send this article in quickly as I presume the May newsletter is already being built to be released next weekend.

So the cheap Chinese HTs that cover these frequencies would also work.

Except ALL of my cheap chinese HTs have been very reliable! But point taken. Lets just say wideband HTs (as I think the Yeasu HTs can also operate out of 2m band (perhaps only after a mod)).

I have a cheap chinese HT which was < £30 and it has performed flawlessly and no issues on transmit or receive from summits. But yes i understand the notion.

ITU Radio Regulations article 30 applies:
30.2 § 2
No provision of these Regulations prevents the use by a mobile station or a
mobile earth station in distress of any means at its disposal to attract attention, make known its position, and obtain help (see also No. 4.9

Using a radio out-of-band and out-of-licence is covered by ‘any means’.
73 de M0PTB

This is the quandry.

A baofeng that will do it all from the factory.

Or a ham HT that is widebanded, but with finals that may be stressed using it beyond the design frequency, esp if the antenna isn’t great for those frequencies.

I am curious, what makes you think that the chinese cheapy will have a better antenna than an amateur specific handheld? Very few HT antennas (be they amateur, commercial or cheap and nasty chinese pox boxes - a category that bongfongs fall into) are particularly narrowband - most are very wide banded and not particularly efficient.

The main issue with the cheap chinese HT’s is in the spectral purity of their transmissions - recently a local amateur tested a number of the cheapies and found that most had significant harmonics well above the allowable limits for commercial use. Some were OK, but from memory these were the more expensive chinese models.

Of course, in an emergency you use what you have available to you at the time.

It’s more that I know a baofeng will (should) work on all the frequencies.

But if a ham radio has had to be widebanded, then will the potentially stressed finals be ok with a potentially high SWR antenna?

Does that make sense?

Does that make sense?

I was under the impression that if a HT was widebanded it can cause problems for the finals when operating outside of the frequencies that it was intended to transmit on.

As per Andy’s rather succint response - no. Most modern HT’s are capable of wideband coverage although specs are usually guranteed only within amateur bands. The amateur HT’s are usually locked to amateur bands for legal reasons as communication authorities in most countries do not like people to have the ability to fire up on whatever frequency they key into the radio. Particularly as you get to the edges of a band, the radio may not be tuned properly and result in poor RX performance or worse, spurious transmissions both in and out of band, potentially interfering with other users and services.

Different countries have different rules and approaches to this type of thing, so be careful about what you read online in particular as to what is legit for use and what is not. Here in VK, the radio authorities can be quite harsh in their enforcement actions in relation to this - other countries adopt a much more relaxed approach - YMMV very much applies in respect to this issue!

The amateur HT’s are usually locked to amateur bands for legal reasons as communication authorities in most countries do not like people to have the ability to fire up on whatever frequency they key into the radio.

This is especially true for entry level licences (Foundation) - in most countries those with a top level (Full / Advanced / Extra) Licence are allowed to own this equipment and the onus is on the operator only to operate it on frequencies where they are authorised to. An additional rider is the use of any equipment on bands where no licence is required (UHF CB in Australia, PMR in the UK, Family radio in the US, etc.) - on these bands it is normal that the regulations state that only equipment certified for these bands is allowed to be used and widebanded amateur HT would not fall into that category.

In an emergency use situation, I would be very surprised to hear of an authority taking any action, other than perhaps a warning, if non-certified euipment were used to call for help in a life or death situation.

This has developed into an interesting discussion on emergency communications, and if push came to shove, I would try anything that might work.

But in practice, even if I was carrying a “wide banded” radio, I don’t know of any channels to call on, and I guess that these would vary with location anyway. In some countries with wide open spaces, National Parks and high risk of wildfires etc, there seem to be systems in place.

In UK, if I was worried about it, I would invest in one of the emergency alert / locate devices that have been discussed in other threads.

One of the weaknesses of relying on an unlicensed service is that you cannot test it! The authorities may be sympathetic in a real emergency, but I doubt they would take kindly to test calls.

Amateur repeaters might be a better bet in UK, and programming in a few of those (or keeping a note of details) would involve minimum effort. Not much use in a remote valley, but then neither would most other VHF/UHF services…

If coastal then trying the coast guard on marine VHF may be a good start. But only if life / death and after exhausting more conventional methods.

Marine band Emergency Channel 16 (156.8 MHz) FM is very well monitored in the UK. You might be surprised where it will get picked up. This is for Marine incidents and would be handled by the UK Coastguard. But in a genuine “threat to life or limb” incident I suspect they are unlikely to complain if you tried to speak to them.

“Testing” it would be another matter - you would be in lots and lots of trouble!