Dear friends of SOTA, the position of “Monte Cerano” (summit I/PM 386), activated by me some days ago, is completely wrong.

Is possible to correct it?

Not easily. It’s quite likely we will have to shut the Italian association down due to errors in the data and the lack of anyone prepared to help to sort out the problems.

Not easily. It’s quite likely we will have to shut the Italian association down due to errors in the data and the lack of anyone prepared to help to sort out the problems.

You’re right Andy. Most of those locations don’t make any sense.
Is the data fundamentally incorrect, or has there been an error when uploading/converting the raw data?

Some of those summits are so far out that there must be a fundamental flaw somewhere.

Assuming the DEM data on Openmaps is correct, just a quick glance shows dozens of glaring errors in the I/PM region alone.

An example is I/PM-421.
It’s listed as a height of 2198 metres, yet the position puts it bang on the 2000 metre contour well away from any summit. The closest summit, would actually appear to be the one marked in red at something over 2320 metres.
The blue cross marks roughly where 2198m might be, but I can’t see how this has the required prominence! 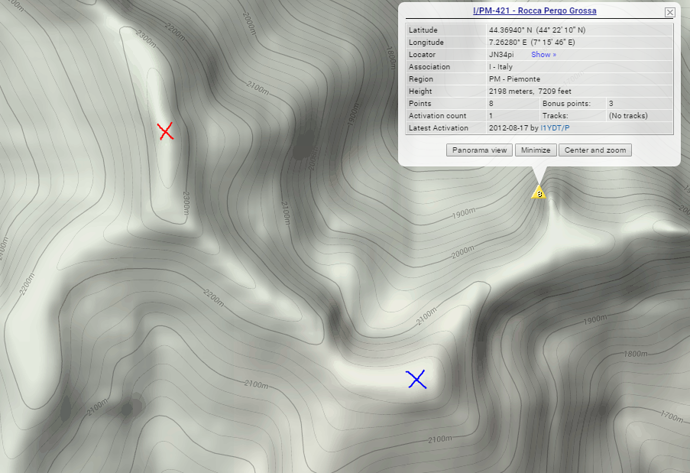 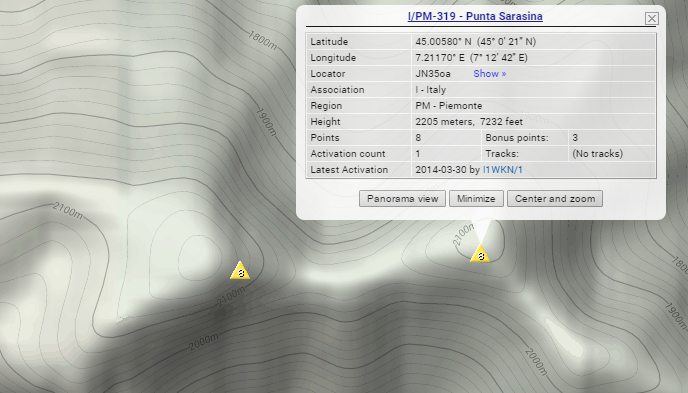 It does look like a lot of work is needed!

It does look like a lot of work is needed!

Oh yes a huge amount of work. I did a SRTM DEM analysis of Italy just over 2 years ago and the potential number of summits is amazing. All it needs is someone do it.

In SRTM DEM analysis, you have to work in 1 degree tile blocks so obviously my data overlaps into the surrounding countries. All these marker pins correspond to a summit that SRTM analyses to be at least P150, See http://www.g0cqk.co.uk/sota/Italy_Potential.html
Jim

There are lots of errors and 100s (possibly more than 1000 summits with 150m prominent summits omitted from the Italy manual I was told by UK MT members).

I found this out to my cost last month when I was trying to activate summits in the Tuscany Region I/TO. A lot of work is needed and volunteers have to be found to do it. I applied for a summit near to where I was staying to be added to the list while I was there that had 600m prominence and received a negative reply from the Italian SOTA Manager which I could not understand…

There are still many Chasers who haven’t deleted the “activation” points I gave them in error when I operated from what I thought was La Cornate I/TO-314 where I used incorrect positional information gleaned from the summits page. This was many Kms away from where it should have been shown. I won’t be going back to Italy for SOTA - end off!

I’ll give it a few more days and then check and list the claimers of the voided activation on the reflector, they may then notice and remove the contact and points. I did not want to be accused of cheating which is why I deleted the activation. The chasers who are claiming the points should think the same in my opinion… It isn’t right that points are claimed as I declared that activation null and void weeks ago!! See this post:

I hope someone steps up to the plate to do the work. My volunteering time is fully taken up with several other committments so I am unable to come forward to help the Italian Association.

PS Later edit - after reading messages from MT / former MT member - in my opinion it would be the right decision to suspend the Italian Association from SOTA until matters are corrected. If it means Italy never comes back in because the work is not done so be it. You cannot insist on going ahead with resolving the difficulties caused by P100 in Central European Associations removing 100s of summits and accept the Italian situation as status quo to my mind. Its not cricket…

PS Later edit - after reading messages from MT / former MT member - in my opinion it would be the right decision to suspend the Italian Association from SOTA until matters are corrected. If it means Italy never comes back in because the work is not done so be it. You cannot insist on going ahead with resolving the difficulties caused by P100 in Central European Associations removing 100s of summits and accept the Italian situation as status quo to my mind. Its not cricket…

Point taken, Phil, but our approach is to put things right stepwise rather than try to do it all at once. Every Association that is updated or corrected puts an additional workload on the MT. If you think about Andy’s reply, it shows that we know about the problem, we have tried to get the problem resolved, and we are not prepared to accept the existence of the problem indefinitely. Jim’s reply shows that we now have an SRTM DEM analysis as a foundation for a re-vamp of the Association which will make life easier for whoever takes on the task. In fact all that is needed is for the Italian team or a replacement team to step up to the crease. Failing this then at some point the Italian Association will probably cease to exist, leaving just the Sotaitalia people with their different rules and limited summit list, and none of their activations will be valid for SOTA.

Hello Andrea,
Thanks for info. I spoke with you at 14.12Z on the 27th July. Chaser entry now deleted.
Best wishes
Mike
PS: Still a qso and in the log which has been uploaded to LOTW.

The potential of the peaks with the Italian Alps and the Apennines is amazing! Please, however, I ask you to grant the association Italian time, I have only made a report about an error in a top position. I do not want to create problems, but to solve them!
I am available to provide the Italian manager the correct data of the peaks in my area.

The activation of I/PM 386 is valid and our qso is ok!!! The summit is over my town and I know the area well!!!

The error is only on the sota database!

The error is only on the sota database!

Andrea would need to provide exact positonal information as to where her station was presumably to be sure. From her comments above she states that her local knowledge confirms that the activation counts, if I read this correctly. I will leave my Chaser points in until more information comes to light…

OK, I have to go out now but will re-enter later.
Night night
Mike

in my opinion it would be the right decision

Not all the data is bad but lots of it is. We’ve been loathed to shut it down for that reason, it’s not all bad. But we have no time/resource to work on it when there are so many other tasks. Unfortunately, it’s either no Italy or Italy with bad summits.If we ever get a volunteers who want to resolve the situation we will end up with a list of valid summits and invalid summits and a huge list of missing summits. We can update then and we should have a good association.

At that point I’ll probably forcibly remove all the invalid summits from every account’s log.

the position of “Monte Cerano” (summit I/PM 386), activated by me some days ago, is completely wrong.

Well the location as given by Andrea appears on my map: 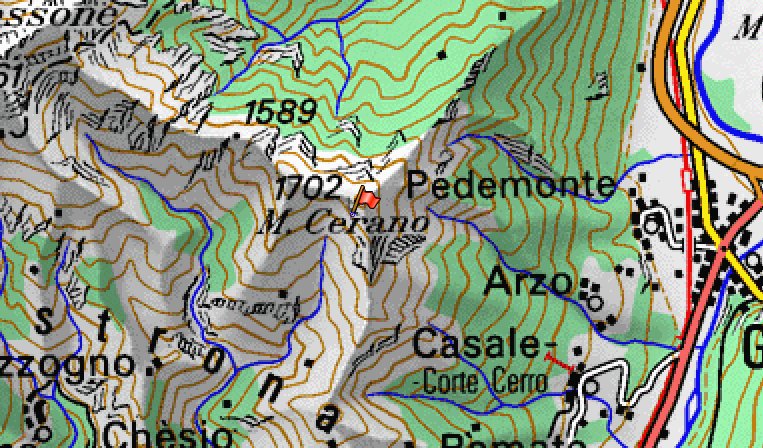 Yes Jim, this is the correctly position of the summit, but in the database is this http://www.sotamaps.org/index.php?smt=I/PM-386 and this location there is not summit!

Actually the prominence is almost certainly less than 85m, so should be removed from the association. The position provided by Andrea is nevertheless correct and the summit is currently on the list of “active” Italian summits. Implication??
Jim

lack of anyone prepared to help to sort out the problems

Andy - what expertise is required to help out in this or any other similar situation?

Actually the prominence is almost certainly less than 85m, so should be removed from the association.

This has all got rather messy.
To clarify, I understand the following:
Andrea activated Monte Cerano at 1701 metres near Lake Maggiore.
This is not the location of Monte Cerano in the database, which shows the longitude as being exactly 50’ south of its real position (Latitude is correct).
This is obviously a typo, data import error or a pure coincidence!
Andy said it’s not a valid activation because it was not from the database coordinates (which are in a nice wooded valley at 220 metres). Nice easy 6 points for someone there

The real Monte Cerano is about 750 metres away from Poggio Croce, I/PM-387 at 1759 metres.
Poggio Croce is both shown as a valid summit in the database and on the “potential” listing supplied earlier by Jim.
Monte Cerano would appear to only have approx 60 metres prominence so is not a valid summit. Looking at that map Pete, it would appear that Poggio Croce should be the SOTA summit, being the higher of the two peaks. (Monte Cerano is effectively just a growth on the side of Poggio Croce). That Monte Cerano is the summit listed in the ARM (I presume) and database, points again to the inaccuracy of some data for the Italian association.

The listed summit at present, however is Monte Cerano and I presume Andrea activated in good faith and (IMHO) the contacts made should stand.