How do you pack your Arrow Yagi for a hike? What about logging while in use?

For those of you who use a multi-element Arrow Yagi (Mine is the 3 element 2m breakdown version), how do you pack and secure it for the hike? It’s just a hair too long to fit well in my pack, and a bit awkward even if I let the longer elements stick out. I’ve considered acquiring an external case of some sort and lashing that to the outside of the pack, but that feels awkward as well.

Also, how do you manage logging while handholding the antenna and radio? I need a third arm!

I like the performance, but it gets in the way a lot.

As you suggested, I have a case and lash it to the outside of my pack albeit gently so as to not bend any of the aluminum rods.

As for how to hold it, push PTT, and log contacts, consider me subscribed to hear what others say as it is totally a juggling act. (It is even worse trying to do it for satellite contacts as I have to watch the satellite tracking app too.)

I have done a lot SOTA activations using the Arrow antenna so I can give you some insight.

My focus is in UL backpacking/radio so this may not all apply to your situation.

I replaced the AL boom with a carbon fiber boom that breaks down to 12" for each section. Most of the time I only take two boom sections and only 2 Arrow elements.
I have modified my elements with bungi shock cord so they quickly deploy. No messing with bolts, etc.
The elements broken down are also around 12" in length.
All of the above goes into a DCF custom bag and then into my backpack. HT goes into another bag.
I’m currently working on a video that talks about this setup. Check out my YT channel for more info: KB1HQS
Logging, I either use my iPhone recording app or a SONY handheld voice recorder. It’s really hard to hold the HT, antenna and make log. If you mount the antenna on a tripod it makes it easier.

Chris here’s my Yagi Support! Bring some Gorilla Tape. Most places you can figure out a way to affix it to something. I am going to rig tent line with stakes for totally bald summits.

The Yagi boom is inside the shorter PVC pipe (that and elements are bungeed together and stick out of backpack. It will catch on low branches. The longer pvc is my hiking staff. Not super cool looking but it works. 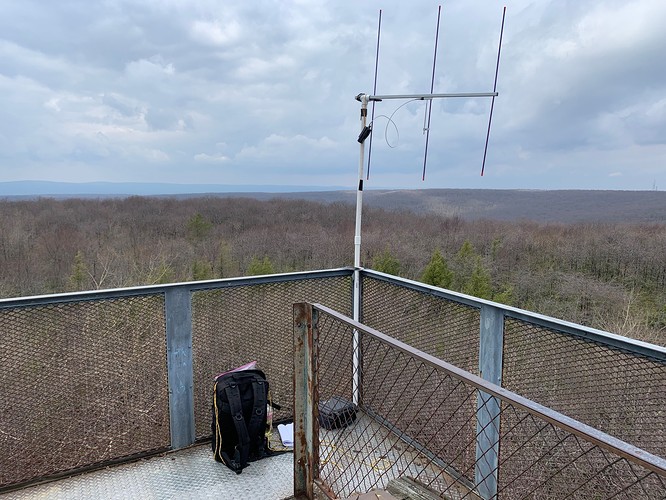 What I did when I hiked with mine. Replaced the 3/4" boom with 1" alum. I could get most of the elements inside for storage, anything left over was velcro’d to the boom, strapped onto the outside of my pack.

If the hike is shorter than 0.5 mile, I just carry it fully assembled. Otherwise I break it down and strap 2m elements to the side of my pack. I use mine for satellites and I will usually pack the 70cm elements in my radio bag or will rubber band to the outside of a water bottle so they have some structure while riding inside my pack.

I replaced the AL boom with a carbon fiber boom that breaks down to 12" for each section.

Where did you get the CF boom?

I’ve considered modifying the existing boom to break down even smaller. The way Arrow does it is pretty straightforward and I’m sure I could duplicate that, but if I’m going to go through the effort, starting with a lighter material will be nice as well.

Chris here’s my Yagi Support! Bring some Gorilla Tape. Most places you can figure out a way to affix it to something. I am going to rig tent line with stakes for totally bald summits.

The Yagi boom is inside the shorter PVC pipe (that and elements are bungeed together and stick out of backpack. It will catch on low branches. The longer pvc is my hiking staff. Not super cool looking but it works.

I’ve seen pics of yours before and was thinking about that when I was on Reddish Knob last weekend.

I may end up copying it.

I did buy the Arrow mounting bracket, but I think that’s the worst use of $16 ever.

I had a custom CF boom made by Ken Alexander VE3HLS who is on Twitter. It took several months, but it is perfect for my needs. I gave him a lot of input on how exactly I wanted it and he delivered.

I did that yesterday (leaving it fully assembled) between drives too easy access summits.

What I’ve learned about Yagis!!! (Hopefully someone will get something out of this)

Fumbling around putting the Yagi together on a summit that is cold and windy is no fun!

The Yagi will make the difference on some summits for sure! For example I would not have activated Hunter Mountain in the NY Catskills without one. I called on the SlimJim/Jpole for a while with no response but was able to get into the ham “hives” just out of reach of the Jpole easily.

This one has me thinking! The forest on Hunter is thick evergreens 360* Was my Jpole transmission being absorbed? Did the Yagi’s extra dB’s break through the pines? Of course the Yagi is a significant transmission boost that is its reason but If given the choice between hanging the Rollup jpole or setting up the Yagi I pick the Jpole every time.

Tips: How to make your Yagi experience pleasurable.

I dropped an element thread as I pulled the antenna out of my backpack. Luckily I saw it fall in the grass but had I not found it the Yagi would have been dead weight. (I need to get extras)

** I’ve actually been wanting to try it as a two element Yagi with only the driven and reflector. I will do that soon.

The Yagi will act like a weathervane (still trying to sort that out) and can be a major problem. It will pick up static from that weathervane-ing wind. That also needs fixed.

Hiking with the standard boom sticking out of my backpack was a back disaster waiting to happen if not just annoying catching branches. It is now mounted next to my pack much lower than it was within the pack.

Handheld sounds pretty simple but in my experience (maybe a lighter design is better) it isn’t happening for long. If you do handheld a lanyard on the HT Yagi support hand/wrist and a speaker mic in the other hand works pretty well! For Logging, set everything down or record QSOs.

Anyway that’s Yagi tips from the experiences in my first year of SOTA BUT most of this is from reading stuff from other activators much more experienced/skilled than myself!

Maybe you will find a few ideas here:

2m Yagi for windy days... with option to be stacked Antennas

Hallo Because of Corona, life is somewhat limited. Good thing the hardware stores are still open. For my /P activities on 2m I have a 6 Elt.Yagi with 2m boom to DK7ZB. I have divided the boom in the middle. I found it very practical to have everything in one quiver. However, it turned out that a quiver with more than one meter length is not practical for hiking. Besides, it brings my telescopic mast to the limit. The 4x Oblong I prefer has a small packing size and is light. It is really good …

I should also mention that AL booms suck in 15 degree weather. It sucks the heat right out of your hands. Another good reason to go with an alternative material if you operate in cold wx. 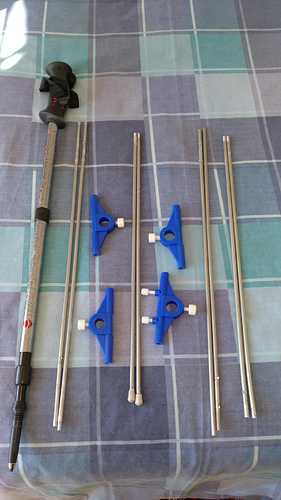 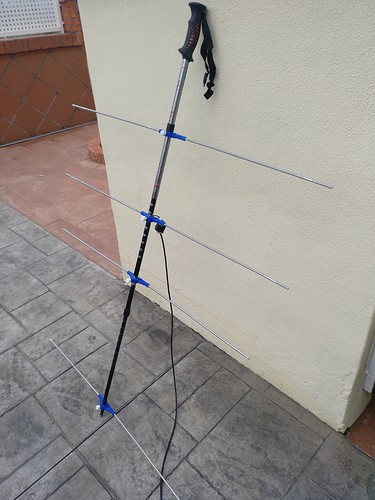 Dismounted, it goes into the backpack. connectors made in 3d printer. If someone wants the stl files, he asks me for them.
73

The Arrow 146-3bp fits down inside it nicely, with only an inch or so of the longest boom section sticking out. The small pocket is perfect for my HT(with antenna removed). There’s additional space in that pocket for other small items. The larger pocket could hold a small HF radio (Mountain Topper, KX2) water bottle, other antennas, etc. There’s enough space in the main pocket for sections of PVC mast sections, additional water bottles, or other bits of kit.

It’s not a substitute for a proper backpack on longer hikes, but should be fine for short trips of a mile or two each way. I think it could be my VHF-Only rig, carrying the Yagi and other portable VHF antennas.

That’s pretty cool. When someone asks about it you can say “It’s my Arrow!”…And be telling the truth.

I am planning on a Mill and Devils Benchmark dual activation later this month. I’ll let you know. It would be cool to do a Arrow to Arrow QSO!

I just use a camera tripod bag. you can get one pretty cheep on Amazon. 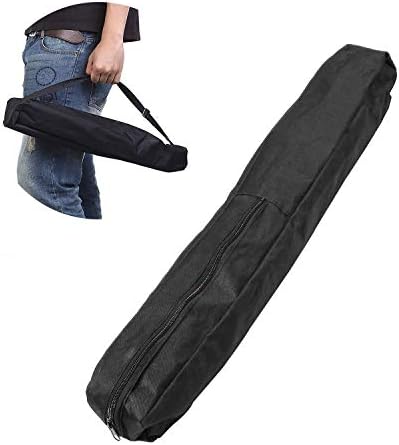 That’s pretty cool. When someone asks about it you can say “It’s my Arrow!”…And be telling the truth.

I am planning on a Mill and Devils Benchmark dual activation later this month. I’ll let you know. It would be cool to do a Arrow to Arrow QSO!

BTW, are you going to be in this area the weekend of the VHF contest? KM4KMU is coordinating VHF-oriented hams. I’m going to also try and activate a summit. I figure that’ll be a great time for 6m FM.

I just use a camera tripod bag. you can get one pretty cheep on Amazon.

That’s a good shout too. I hadn’t thought of that. Though, I was looking for something I could sling on my back. Being a former archer, I gravitated to quivers and quiver-like devices.

I’ve actually been wanting to try it as a two element Yagi with only the driven and reflector. I will do that soon.