A last update on this thread from me, or at least probably for a few weeks. The balloon flew north into Ukraine last night and into a region with very few TTN gateways and virtually none with outdoor antenna. So I wasn’t expecting it to check in early this morning and it didn’t but a couple of hours later a single gateway established contact for an hour or so and gave the balloon’s position as close to Kiev.

The gateway, which was in Kiev itself, was an indoor one according to the TTN website and I can only guess it has a view of the sky through a window.

Short though this “drive by” contact was it was reassuring to see the balloon is staying at the same altitude.

The balloon is likely to swing east over the coming day or so. There is a chance it could swing back west into Europe but this is a lower probability than an eastern route although the weather can never be predicted with precision. If it does go east it will pass a little north of Moscow and then if it is very lucky probably reach the Pacific somewhere near Japan. If very, very lucky it will return to Europe via the Atlantic in about three weeks.

This is the last know position today: 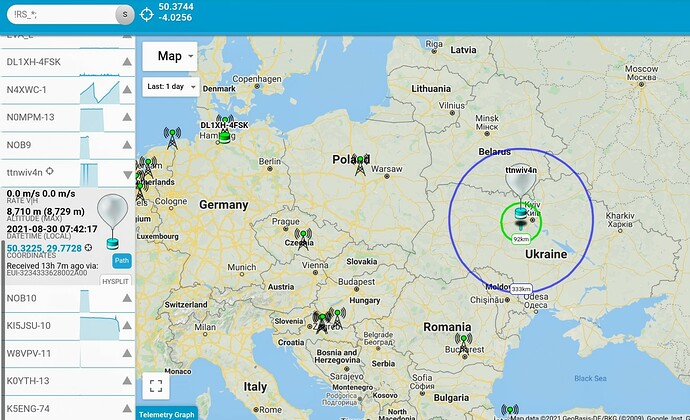 If the balloon does swing back west I will post an update tomorrow otherwise, it it goes east we will all have to wait and see if it pops up again next month.

Any updates on the balloon? Any further telemetry received?
How long do such balloons typically last up there?

Joe, the earliest it might reappear will be towards the end of this week. They can stay in the air a long time. I think the record is something like 17 circumnavigations of the world which took a year or more.
John

Looking at that side of the world, Russia etc there appears to be a lack of TTN nodes. One in Australia and a couple in the USA.

The problem is different parts of the World use different TTN frequency plans. The Imperial College of Science in London built a tracker which uses the gps to work out what frequency to use, depending on where it was. But I’m using off the shelf components and the transmitter is 968MHz only. It probably could transmit weakly on different frequencies but the coding required (in C++) to get the geo-fencing required to change plans was a bit beyond me at the time. I may yet try again but I now have the special licence from Ofcom to use WSPR on the 20m band from a balloon so my efforts now are going down that route. Its amazing what ranges 15mW of WSPR can do at altitude - thousands of kilometres.

Cheers. Hopefully the balloon will ping into life over the next couple of weeks and say hello!
Looking forward to seeing the results of a 15mW of WSPR on 20m.