The only connection this post has with SOTA is it is about transmitting radio signals at altitude - which is I guess what SOTA is all about and it may therefore be of minor interest to some.

On Wednesday I launched a small balloon from my house which was carrying a solar powered payload fitted with a GPS and radio transceiver. The all up weight of the complete payload was 10.2 grams, which is on the heavy side as some have been made at 5g or even less but i’m using off-the-shelf components not a custom made board.

I should stress the launch was done with the approval of the UK Civil Aviation Authority and a NOTAM (Notice to Aviation) was issued warning pilots near the launch site.

The radio is transmitting on 868MHz and is using The Things Network (TTN) of gateways which cover most of Europe. It has caused a bit of controversy in TTN circles as it is transmitting every 30 seconds which is too often and violates the TTN Fair Use Policy. In my defence other balloons have been launched with this interval including one by me without any fuss but I seem to have been given a reprieve and the pitchforks have been put away.

The balloon is currently moving south down the UK and has just left the Lake District. On this link you should be able to find it as “ttnwiv4n”.

The website is a bit flaky and if it doesn’t load quit out and try again. If you click on the question mark on the far right of the menu bar the Welcome panel on the right should vanish.

It won’t be possible for any amateurs to communicate with the balloon as the LoRa transmissions are encrypted and are transmitted on 8 different channels with a different channel being selected at random for each data packet of lat, long and altitude.

If you select on the Tracker website to view 3 days of data you should see the flight path which starts near Plymouth and heads west. In the evening it shut down and I didn’t expect to hear from it yesterday as it was going to fly too far from land but for a short period it was heard by one gateway* which is where you can see a curved path between Scotland and Iceland. It then woke up this morning over Central Scotland and is being plotted. The straight lines on the path are of course the times when it was not in contact.

*From its ID number the gateway hearing it was near Emden in North Germany. I am not sure if this is correct but it might be just remotely possible some sort of ducting occurred but no website I could find yesterday suggested the conditions in that area for Sporadic-E or Tropospheric Ducting were in any way favourable. I’m putting it down as “unexplained”!

A picture of what the payload looks like is shown below. The balloon supporting it is a 36" clear £1 balloon from AliExpress and is filled with 95% helium - “party gas”. Hydrogen is much better but it is expensive to get set up for using hydrogen. It was launched with two balloons tied together but given the altitude it has reached I think the upper balloon has parted company as I had expected an altitude above 10000m but it has settled at the same height my first balloon did which was launched under a single balloon. It seems my balloon tying skills need to be improved! 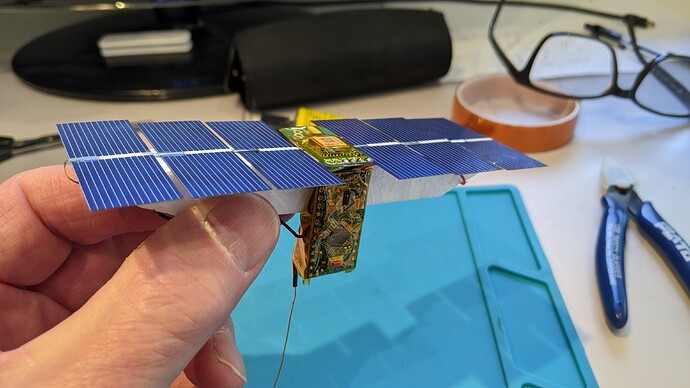 Very interesting John. I used to track a few HAB from here on 70cm…but not for a while now. 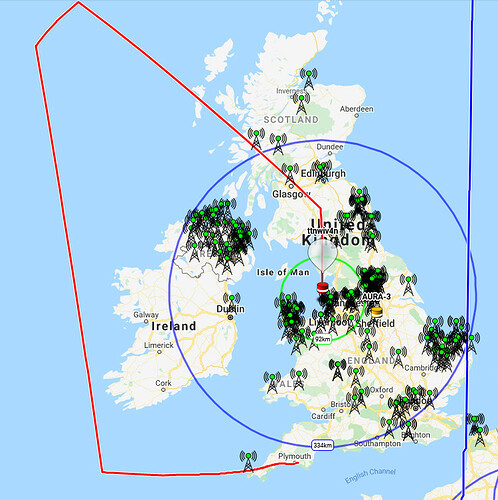 I’d like to think it will fly over my house but the prediction is it will cross over the Channel a bit to the East. There is a button called “hysplit” in the area where the data can be seen. If you click this it will show a complex of lines. This is a NOAA set of predictions and the different colours represent I think from memory different options for how the air flow might change. It’s complex!

The predictions are good the balloon will stay in Europe for a while as it will lose contact once/if it reaches Asia. Once that happens I can only sit back and wait about three weeks and hope it reappears crossing the Atlantic. One can but hope. 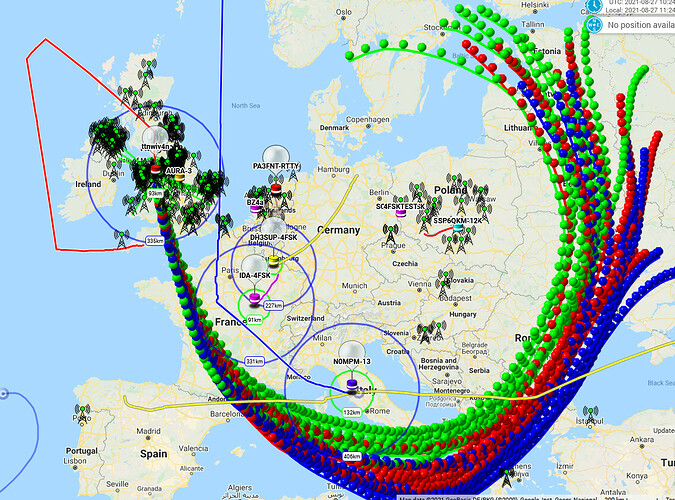 In theory similar balloons have stayed in the air for months and a few have done multiple circumnavigations. But the failure rate is high and the big difference is I’m using He and the successful flights have almost all been done with H2 and were flying at a higher altitude. Hydrogen is much easier to keep in the balloon - helium is notorious for escaping. This is because a single atom of He is both much smaller than an H2 molecule and being chemically inert is in non-scientific terms “a bit slippery”.

My main concern is the altitude. It is holding this so there can’t be any serious leaks but to get above most of the weather it really needs to be above 11,000m and ideally above 12,000m. If it encounters a storm at its current 8,700m it will be a goner.

I wil keep the link saved and checkin now and then to keep an eye on it. Its about to go over/close to my QTH.

I forgot to add if you click on one of the blobs on the hysplit path it will show a time. From this you can see where it is likely to be. It shut down at 18:00 UTC last night and didn’t give a GPS fix until around 08:00 this morning although it was transmitting for over an hour before that but until the sun is high enough there isn’t enough power to run the GPS.

So my guess is it will close down today as it approach France and hopefully wake up tomorrow over the Mediterranean.

It is true that a balloon floats less in the air than a boat on the sea! But this thread has already 11 views it!
I have never, even out of humor, considered a publication badly. But it is not because we have nothing to say on the subject that we cannot express

Edit :
John @M0WIV I think you now this link
https://www.qrp-labs.com/flights.html

Yes, I am waiting for QRP Labs to start selling their WSPR tracker which is what Dave VE3KCL has been using very successfully while testing prototypes. He has also given me some help on this flight. Unfortunately QRP Labs have been caught in the semi-conductor shortages and are having to do some redesign to use components they can obtain…

The problem is it is not legal to use WSPR from a balloon in the UK. I am currently seeking a special licence to let me trial it but they are still considering my application.

There is a French Facebook group flying balloons as well.

it is not legal to use WSPR from a balloon in the UK.

It is in licence free bands.

I imagine it’s the <1% duty cycle requirement. The ISM bands are not a free-for-all.

It is in licence free bands.

But the WSPR which is being monitored all round the Globe is running on Ham bands, particularly for this application the 20m band is the one to use. Its amazing how a balloon in the middle of the Pacific producing not much more than 20mW can be heard thousands of miles away.

Have a look at http://www.wsprnet.org/drupal/wsprnet/map

Change it to 20m and in the call field enter VE3KCL and select the last 24 hours. This is a balloon currently over Greenland. If you change the time slot to the last hour it even shows another balloon. You can also find them on the HabHub Tracker map although the Greenland one seems to be over Canada now.

This is oddly addictive … I see how it fits with SOTA

WSPR balloons running on 20m have been launched from the UK. The reality is who is going to know or complain but these launches tend not to be widely advertised!

This is oddly addictive … I see how it fits with SOTA

but a summit to summit with a LoRa link running say on 434MHz or 868MHz would be possible using low power ISM band transmitters. I have a Raspberry Pi based tracker which takes 4 AA batteries and broadcasts about 20mW on 434MHz. It went up to over 30,000m and returned in one piece. The program would need altering for a QSO but it is feasible I think.