These days, propagation conditions are rather poor. See how condx were last March 29th:

It is time to find a new way to improve the signal when portable. As for me, building and testing antennas is one of the most interesting parts of our hobby,

A good way to increase the chances for DX would be to design a beam antenna for the countryside. Well, it sounds good but it is a bit difficult. I settled my target for 14 MHz, a good choice nowadays to get some DX during daylight.

We won’t have towers and rotors there, what should I do? I recalled a past experience when I built a vertical Moxon antenna (2 element) made with wire elements for 21 MHz. It worked great but scaling that beam to 14 MHz is huge and that band is pretty closed nowadays!

My head was thinking and I decided to run some simulation models (Mmana) with ideas I had. I run different alternatives and then one atracted my attention. I optimised the model doing modifications until I achieved the best performance. What were the key features of this antenna?

I had enough reasons to decide it was time to try that in the real life.

Last week I cut long wires at home (this can be a bit annoying for the family in the living room, hi) and tested briefly the resonance in a park.
It seemed to be okay so I decided to give it a try for the first time on a summit.

Jorge EA2LU was kind to join me and we agreed to run a brief test with the antennas prior to activating the summit. We would run the first minutes calling as a beacon (/B) to see our signal level on automatic decoder stations afterwards (RBN network).

Weather was okay on top, clear sky, but a bit windy. Anyway we decided to proceed.

Jorge helped me to install the antenna which took about half an hour. It is difficult to deploy two full size loops on ground and then to raise the pole without having some troubles with tangled wires, specially if wind is present.

This is how the antenna looks like one up in the air, beaming NA: 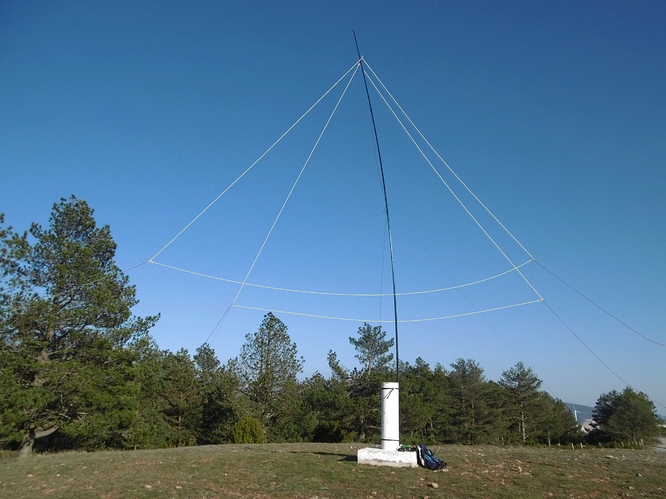 The antenna was difficult to maintain against the wind so we didn’t reach the expected highest point planned to be 9 m above ground; instead the top would be at about 7 m. This would affect performace degrading a bit the radiation lobes. SWR was just fine on 14.062 MHz (1,2:1).

Later we erected the second antenna, an EFHW inverted vee with the appex 8 m high.
See Jorge and his EFHW just in front of me: 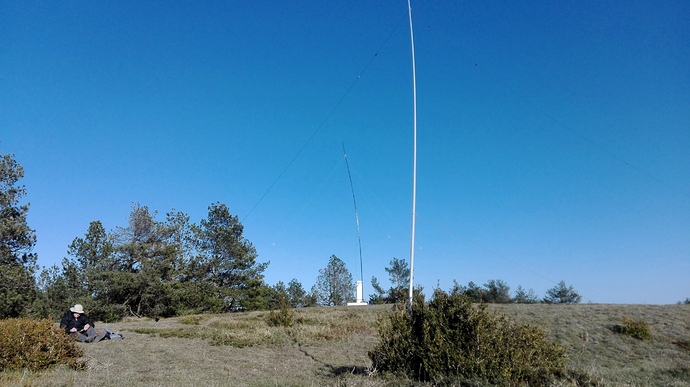 Then we settled our rigs (KX2 & KX3) to 10 w output power and started sending a beacon. We did so for about 5 minutes, This is the data I got after returning home and checking the Internet:

Data confirmed Jorge had better signal towards EU: 9 dB better than me on OH. It had sense bearing in mind the F/B in my antenna.
In the other hand, I had about 2 – 3 dB better than Jorge on NA. Not much but it helps. As said, the Delta was not as high over ground as planned.

I had the monoband antenna so I stick with 20m, CW for most of the time.

Did the antenna worked?

After 1 hour calling on CW, I was tired and wind was developing. Jorge had worked a big number of EU chasers and even K0RS and NE4TN himself. 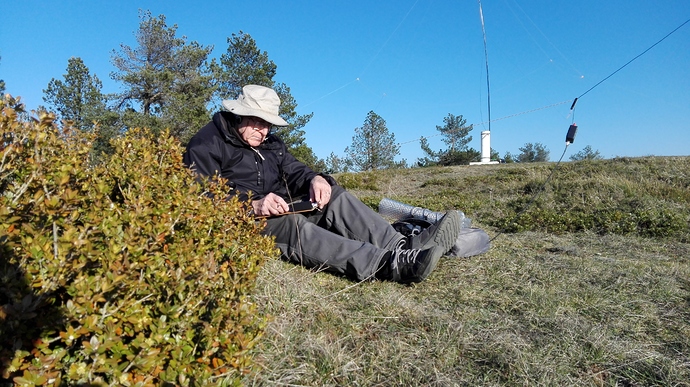 We decided to end the activation, but a look at sotawatch revealed some USA stations nearby on 20m.

Let me thank Guru EA2IF who was very helping sending some spots to announce both Jorge and me on Sotawatch.

9 DX qso from USA in my log let me think the 2 element Delta works all right, and I am willing to find a date for extensive testing. It is not an antenna for a regular activation, but for special events: international S2S events or even Field contests.

I know this desing could be of interest for any of you, so I will prepare a separate article whenever possible to describe its technical details and provide useful information if you want to replicate it.

See how close the two deltas are in the top of the pole as seen from below. This helps a lot to hold it with a single support and still keeps the directivity in the beam: 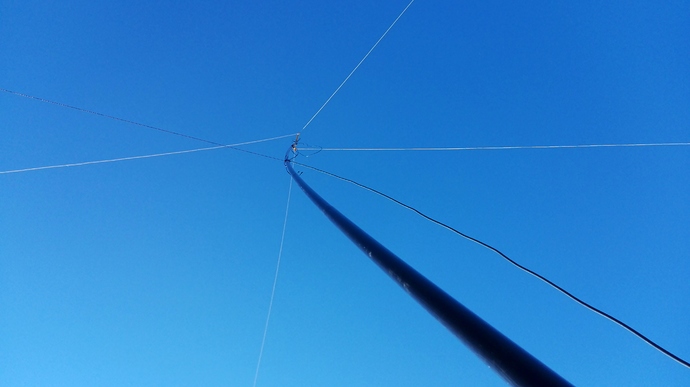 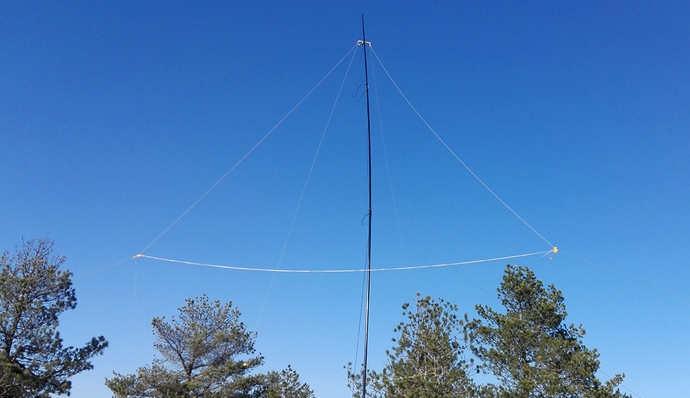 I searched on Internet to check if this design was ever published but couldn’t find something similar, because existing 2 element Deltas are spaced parallel, not like my design. Well, I have invented something, it seems!

I am so happy with the outcome of this experiment that I decided to give name to this antenna. The 2 Beam Delta antenna is born. I added a logo if you make one yourself and want to print a stick for the carrying bag 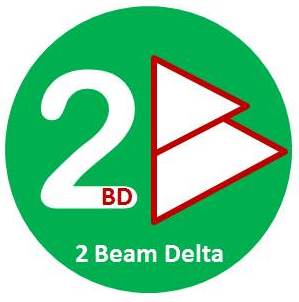 (Not any commercial purpose intended…)

Nice work Ignacio. I look forward to your article on the technical details! This is an antenna I would be interested in building. Thanks for sharing with group.
73
Mike NS1TA

Great work Ignacio.
Wonder if you could have 1 loop cut for 20m and the other cut for 17m and swap feed lines to change bands. The 17m el could become a director for 20m and the 20m el could become a reflector for 17m . Is that too out of the box thinking. Feeding in a bottom corner will lower your radiation angle my 30m delta loop is a triangle 1 point fixed to my tower but fed in a bottom corner its been a great antenna for 30 years.
good luck and be interested in further testing and results. Look forward to another S2S hi.
73 vk5cz …

adding a second band is a good proposal. At the moment I just wanted a monoband version.

Feeding in the corner would apparently change polarization into Vertical, but the simulation model gets a bit mad about that… Gain seems to decrease. In the other hand Z changes back to about 100 ohm, while my original version is a direct 50 ohm feed…
On top of that, having the feed line in the down corner adds weight and it is important to extend the wires properly to have a good triangular shape.

There is a lot to check and see. As said, this is a first run and I need to use it several more times to get a clear picture on how the antenna performs.

I wish having the right tools to measure field strength but I am afraid I will have to rely on reports and RBN comparing it with some reference antennas on different configurations, and when possible performing an A/B RX test as well.

Anyway, I’ll provide some technical details if any of you wanna play.

Hi Ignacio,
You may want to consider using the WSPR network to see how the antenna radiates. If you have an Android phone, there is the App “WSPR Beacon” that you can use with you existing transciever, by simply holding the smart phone to the rigs microphone. then check afterwards on WSPR Net, (possibly using the Android App WSPR World Watch) to see where your signal was received and at what signal level.

Of course there is also the compact and simple to use WSPRLite units from SOTABeams which are worth the investment if you experiment a lot with HF antennas.

Thanks Ed, I will consider it for future tests
73, Ignacio

Hi Ignacio,
You also have the option of borrowing EA2IF’s WSPRLite unit, which will be available for you whenever you want.
73,

Thanks a lot Guru,
we’ll do something to try together for sure.
73, Ignacio

Great stuff.
I’m waiting for more build info on it.