I’m documenting this summit here mainly in order to link to this post from the summit info page, as the extent of the activation zone (and whether the tower needs to be climbed) is not clear even on a high resolution map. 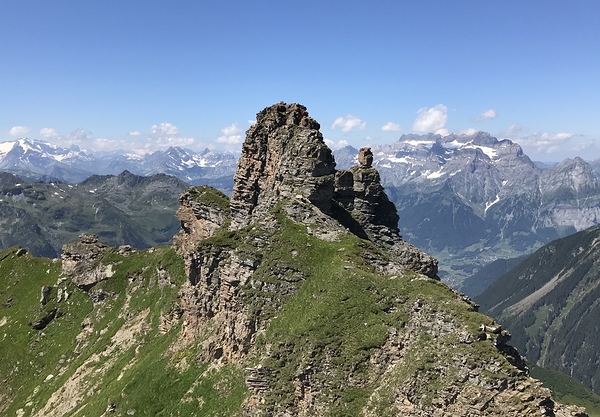 For the June 1, 2018 revision of the HB summit list, I analyzed a DEM (Digital Elevation Model) of Switzerland with a software tool, and used a script to compare the results with the previous list to find any discrepancies or new summits. One such discrepancy was Gulderstock HB/GL-019 2511 m, which didn’t appear to be the highest point. The latest Swisstopo map revealed that Gulderturm, a tower next to Gulderstock, was 8 meters higher, but as the tower didn’t have an elevation label in earlier map versions, Gulderstock had been chosen as the SOTA summit. This has now been corrected as of June 1, and since Gulderstock has never been activated anyway, the reference has remained the same.

It is therefore my own fault that the way to HB/GL-019, which would only have been a medium-difficulty hike (to Gulderstock) before, turned into an additional short rock climb to Gulderturm 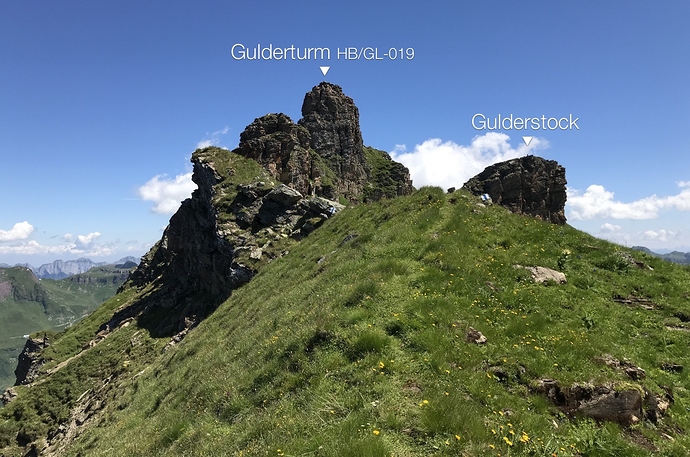 As I was hiking towards the summit, I met two girls who were just marking the route to Gulderstock with white-blue-white paint (i.e. an alpine hiking trail). This freshly marked route, which I would estimate to have a difficulty of T4 on the SAC hiking scale, passes underneath Gulderturm on the south-eastern side, and leads to a relatively flat spot just below the tower (46.99295, 9.20053). According to my measurements, this spot is at 2501 m and still within the activation zone. This is where I put up my antenna, as I didn’t know whether it would be convenient on the summit, and preferred to climb without a heavy backpack anyway.

This was an AlexLoop activation with the usual weak signals to frustrate chasers – something I avoid doing these days, but as it wasn’t clear beforehand whether I would need to activate on the tower and how much space there would be, I decided to take the AlexLoop this time. 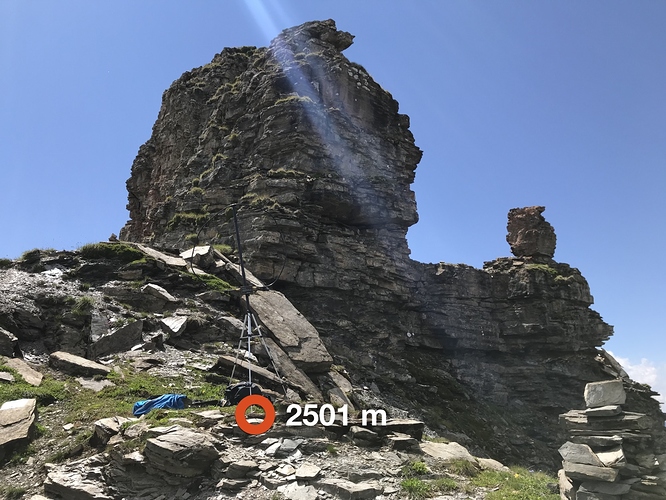 To me, no activation is complete without having visited the actual summit. So I climbed into the gap between the Gulderturm and its little cousin, the “Guldertürmli”, traversed on the north side around the tower and approached the summit through the south face (approximate route in photo from memory). UIAA grade II; in some places the rock is brittle. 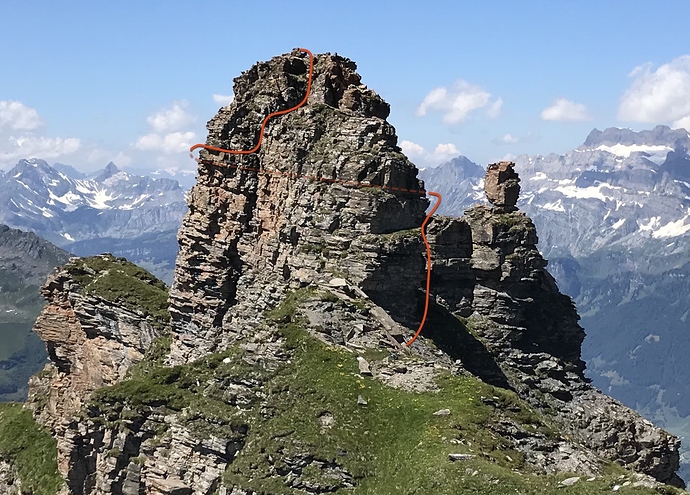 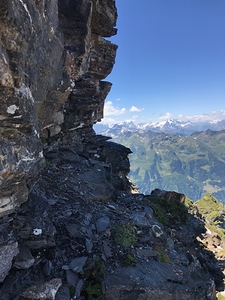 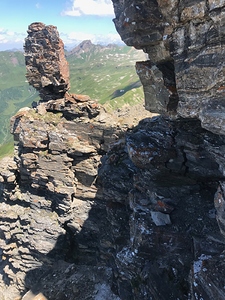 At the summit, I found a cairn with a summit book from 1987. There were five entries from 2017, and none for this year yet, showing that this summit is not visited very frequently. 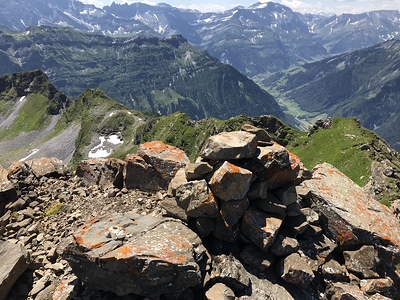 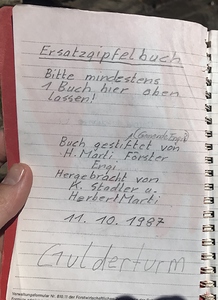 Before the descent, I calibrated the barometric pressure sensor in my iPhone to 2519 m at the summit. The Bosch BMP280 sensor has a relative accuracy of ±1 m, making it possible to check the extent of an activation zone more accurately than with maps or GPS.

Thanks, Manuel, for your insights into portions of our lovely country that I’ll probably never access – or maybe in another life, hi. You do a great and valuable work on such time consuming details.

I enjoy reports here on the reflector that offer not only technical details but also some «story». Great usage instructions on this page of the summit book, hi.

Hi all,
I have two related questions:

then you could operate from either the main peak, the secondary peak, or the saddle.

The most practically relevant case is when a) holds but b) may not, i.e. the lowest point of the saddle is more than 25 meters lower than the official peak.

. . . and, of course, I assume that the real top point of the ridge has been chosen/determined to be the SOTA summit. And what is “correct” or “inorrect” in the sense of the rules is again something else. I suppose that the MT relies on the database entry - what else should they base on? They have no inspectors to send out and can only rely on the AM’s hopefully solid work.

Hi Markus,
thanks! That clarifies it, and is also a very nice explanation of topographic prominence!

We rely on a bunch of things, but it largely comes down to the quality of mapping available.

Thanks, Andrew – 138 associations generate probably a wide variance of data quality. Getting better can be very time consuming!

Martin: Question 1 regarding wrong positions of summits should be replied by the MT. Hopefully, you’ll receive a special award if you manage to activate from a higher position than shown in the database, hi.

But I think that a better, more accurate position of the summit will be accepted, this seen from the spirit of the programme.

If the SOTA database includes incorrect position information about an established summit (like in this case), and you activate from the actual summit - will that be within the activation zone and thus a valid activation?

Has it not always been said that the coordinates in the ARMs and the database are for identification purposes only and are not to be relied on as giving the precise location of the peak? The extent of the activation area is defined by what is found on the actual ground. Everything else - database, maps etc, is secondary.

The accuracy of the database coordinates does vary, even discounting simple mistakes. For example, most of the coordinates of the UK summits were originally converted (by me) from 100m grid references, and the limited precision of that data neccesarily compromised the accuracy of the result. Many of those positions have subsequently been adjusted by the AMs, but anybody can see from the mapping tools that some of them are still quite a bit off. There may even be cases in which the marked position is outside the actual activation area - it is certainly possible in theory. They nevertheless serve the purpose of identifying which peak we are talking about, especially in areas where naming alone is inadequate.

Ultimately it is the activator’s responsibility to operate within the appropriate vertical distance of the highest point as found on the ground.

From far away looks more than grade II with decent exposure!

Thanks for the report Manuel, the summit climbing looks awesome.

Well, at least on HB summits, the longevity of these books seems to be limited mostly by moisture and rodent action! The 1987 summit book on Gulderturm has a note on the first page saying that “the old book has been nibbled by a rodent”

Apparently the summit book on HB0/LI-001 has suffered the same fate. Here is the page where the first activator @PC5A signed it: 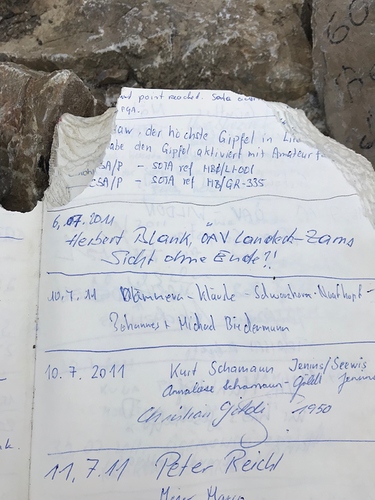 Finally, the oldest summit book that I’ve found so far was from 1970 on this summit (photos of the book in the post):

Gumihorn 2100 m. Highest point of Schynige Platte, forming its landmark as a tower with a rounded summit, which appears hard to access. […] As the summit requires climbing, it is rarely visited. (translated from a guide book of the Swiss Alpine Club) [image]   Gumihorn as seen from the northwest Gumihorn HB/BE-134 is not an ordinary summit. While it is just a short hike away from the top station of the Schynige Platte Railway (a nostalgic rack railway that takes about 50 minutes from Wilder…

To me, it’s a magic moment when I arrive on a rarely climbed summit, with only a small cairn as a sign of human activity, and find a summit book that has been up there for decades.