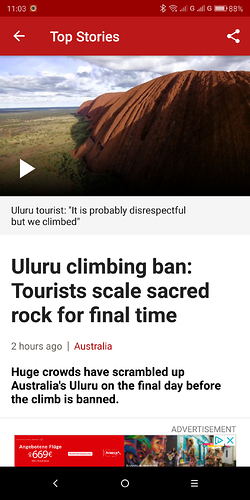 There was also a media article yesterday suggesting that other sacred sites (also SOTA summits) may also be on the list for eventual closure. Includes Mt Warning, St Marys Peak, Mt Yengo.
Compton

Goodbye Uluru? It will still be there and it will always be listed as a SOTA summit, since the SOTA listings are only based on topographic prominence.

Maybe it will be activated by an Anangu Ham one day.

Sacred sites. Our ancestors climbed it and left it here for us. The idea that mankind today doesn’t revere what we have is pure ignorance. Mankind walks the same journey, and always with respect.
I think Summiteers demonstrate this best. We look out our windows and we stand in awe of the beauty we see and feel. Climbing to the top of a mountain does nothing to diminish its value and more likely enhances the value as we witness what our great ancestors saw and felt and, given the opportunity, to worship the Earth.

Perhaps I was too brief in my reply. As far as the MT is concerned no summit will be withdrawn if it has a valid prominence. Access can be forbidden for human reasons, whether they be military, property rights, bowing to primitive superstitions or whatever, but such bans can also be reversed. Human reasons change much faster than geology! So if the situation changes then the mountain will still be listed and activations can commence without delay.

Perhaps the title should have been au revoir rather than goodbye.

Brian,
You are right about humans changing things. The first wave of humans into Australia circa 60,000 years ago were displaced by a second and third wave who drove the original inhabitants south to Tasmania where rising seas gave then refuge. Some 20,000 years after the last wave of people we now call aboriginals, white explorers from Europe came and the British decided o claim the continent. Over the next hundred years the aboriginal tribes were defeated by disease, force, infighting and the attractions on a new lifestyle. A few deeply resented the loss of power, authority and land ownership and their discontent has been regularly voiced.

We have had only three definable races occupying Australia, unlike Europe where countries have been conquered at regular intervals, divided and renamed so frequently that finding an indigenous pure blood is probably impossible. Change is understood but land ownership is still fiercely fought over. Here, giving land to groups of people who denote themselves as aboriginal and having some claimed linkage to the area has been a politically popular thing to do. It is nevertheless a polarizing topic and we won’t make any progress discussing it here.

By the end of this century what is now a cultural no-go zone may be deserted, or a mine or a tourist mecca with a five star hotel on top. Who really knows. SOTA stands every chance of still being active.

I’m glad two people activated Uluru before the current closure, but that might be my inner statistical soul speaking.

I suggest the topic be mothballed until significant changes occur.

I don’t see why the topic should be stifled Ron - it’s a completely relevant issue in SOTA.

As @G8ADD points out, a summit is included if it meets the topographical prominence requirements alone*. Access is not taken into account - but is an entirely relevant thing to discuss on here.

(*Notwithstanding the fact that many summits in the OK - Czech association still fall far below this requirement).

There are many summits in SOTA that are listed, but not accessible for prospective activators. Reasons include:

I was brought up with reasonably good manners Brian.

If my neighbour asked me not to walk on something because he had deep feelings for it and it annoyed or upset him, then I wouldn’t.

If I went to another country, claimed it for my own and some of the locals asked me not to walk on something because they had deep feelings for it and it annoyed or upset them, then I wouldn’t.

It just seems the polite thing to do.

I was brought up with reasonably good manners Brian.

I think you were actually replying to Ron, David. However, I think that there are two sides to your opinion about bad manners. It isn’t simple.

It is worth remembering that everywhere in this country is owned. We have access to so much of our uplands as a direct consequence of the mass trespass of hundreds of ramblers on Kinder Scout on the 24th of April, 1932. This led to scuffles with gamekeepers, some of the trespassers received prison sentences, but it led to a paradigm change over access which we in G-land SOTA benefit from. If the ramblers in 1932 had not had bad manners then we would be denied access to very many SOTA summits instead of just a couple.

Really? I rather doubt it myself.

If you don’t respect the big stuff you are liable to become a statistic! I know what you mean, though. I hate the types who gush about the scenery yet leave orange peel and crisp packets on the summit.

I probably was Brian. It was a sleepless night so I must apologise for not concentrating more. Although I’m not too sure it was meant for anyone really.
And, as you infer, without trespass on Kinder we’d probably be a poorer country for access…