GM/ES-050 Coyles of Muick - another day of great views

This was my second activation of GM/ES-050, having previously been up in October 2020. The weather was pretty similar to my first trip - frosty, very sunny with little or no wind.I tried a different route up from the North which has better views and would recommend it over my previous route from the East through Alltcailleach Forest, which is entirely in trees until right near the top and pretty boring.
Parking is at a layby on the B976 just outside Ballater next to a gate giving access to a path which goes past the small Loch Ullachie. The Abergeldie Estate has unfortunately not done any clearing up yet after the big storms and the otherwise good track is still littered with dozens of fallen trees, a few of which required detours to get around.
Route up:

Notwithstanding the obstacles, I was out of the trees onto open moorland in 30m. A single track path then runs south all the way to the Coyles. This is obviously used by bikers, judging by the tire marks. There were a few boggy bits to splosh through, but as things were still more or less frozen, it wasn’t too bad. Views of the hills to the southwest were very nice and Lochnagar was looking particularly majestic: 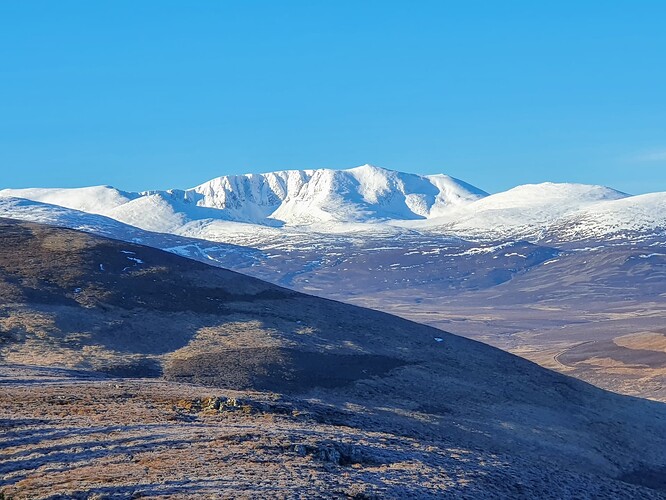 Got to the top after about 1 hour 20m walk. Didn’t see a soul all day, which surprised me, given the beautiful weather. For the first couple of hours I was in my shirt sleeves, then a cold breeze sprang up after lunch requiring fleece and woolly hat but still pretty comfortable. 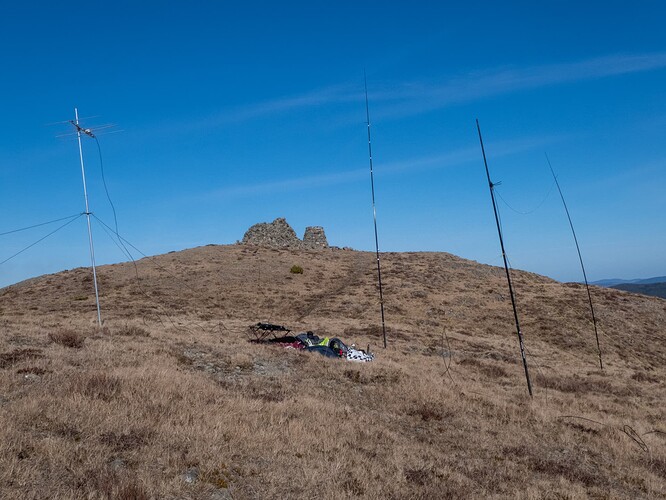 Started at 1042 on 145 FM but 10 minutes of CQs brought nothing. I could hear a couple of locals ragchewing about Covid but that was all. Disappointing.

Moving down to 40m, I was a tad surprised to hear some US stations in the ARRL contest but easily found a clear freq. G0FEX was first in the log - I note incidentally that the ADIF output from Log4OM often puts the stations logged during the same minute in the wrong order, even though they are correct in the master log. Hey ho. A run of another 26 ensued, including EA2DT, whom I had missed last activation.
Moving up to 20m, I got a quick S2S with DL2KL/P and then miraculously found a reasonably clear freq in the maelstrom of the ARRL contest. Another 25 in the log, including Guru EA2IF and a second S2S with SP9MA/P.
Dropped back down to 40m to pick up a S2S with G0KYS/P and then tried 2m again. Nothing heard on FM, although interestingly I heard a strong CW beacon around 145.9 - BJ1SV, which is a Chinese satellite. I presume that must have been passing overhead. Moving to SSB I heard a few G station whispers, including G8T calling CQ contest, but CQs proved fruitless until at last I got a call from Brian GM8PKL in Edinburgh, who was my only 2m contact for the day.
I then put up a 17m delta loop and a spot brought a decent run of 17 including Dinos SV3IEG, Fraser MM0EFI calling up from his home and a 2 station S2s with SP9BIJ/P and SQ9BQW/P. I also worked UR5IRM who I guess must be in “Russian” Donbas, as I thought most Ukrainian hams were now off air

Pausing for a sandwich I had my first major technical glitch on an activation - my mobile phone appeared to have packed in. Battery was 100% charged at the start so that wasn’t the issue. I eventually managed to see a very faint screen but was unable to see alerts or send spots. When I got back home it was working fine and I think it was something to do with the automatic screen brightness adjustment, rather than overheating in direct sun which was my first thought. However, the phone had worked perfectly in 30C temps in Lanzarote… So, I had to revert to the traditional methods of listening and calling CQ (shock/horror

)
Tuning around on 40m I picked up OK4KOP/P on a GMA summit, followed by S2S with M0KXN/P and G8TMV/P.
Tried CQs on 2m SSB again - nothing.
15m was socked-in with contesters, 12m was quiet and all I could hear on 10m was a couple of Brazilians working the contest. So for the final run of the day I went back to 17m. I found a clear spot and called CQ and asked folk to spot me (which they did but not on Sotawatch) - thanks to 2M0IIG and others, which did get me some more callers including KI4SVM in SC for my only transatlantic QSO of the day. A few minutes later Hans MM6HDZ called in from Ballater - the first time we locals had heard each other. He was running 10w to an endfed. Then 5B4AIX Noz called me, which was my furthest East for the day. Just before I packed up I tried to pull in a DL6 who called me, fading in and out above the noise, but I just could not read his full call unfortunately.
Went QRT just after 1500 and was back at the car by 1730.
89 QSOs for the day including 7 S2S
Thanks to all as usual for a very enjoyable day out. 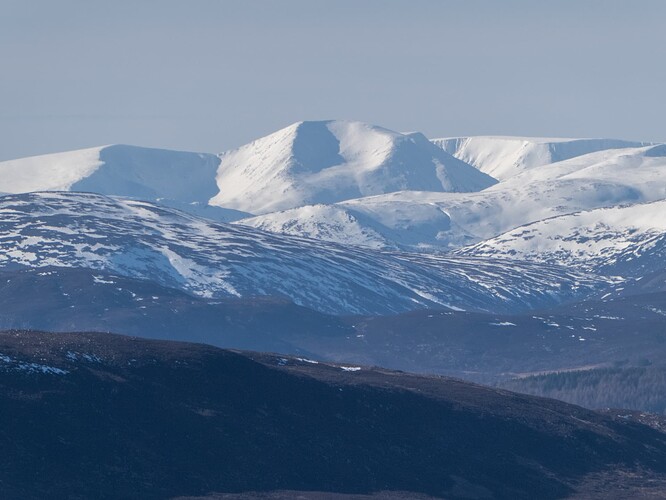 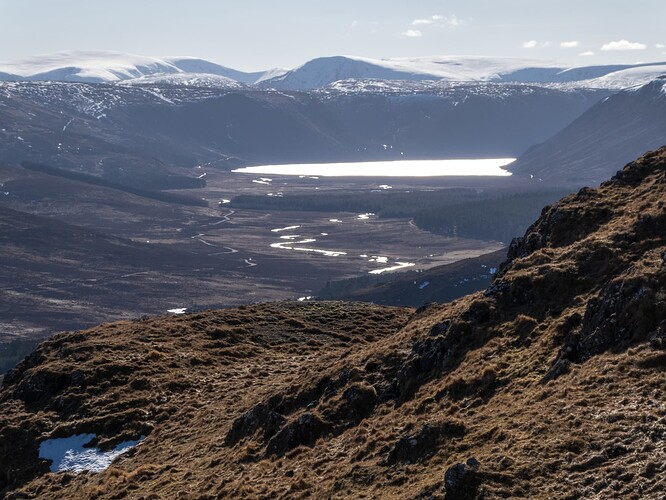 Yes, its very photogenic with the snow. Might put that on the wall.

Good effort Simon. I may follow in your footsteps and try and knock that one off before the weekend.

Indeed it is Cairn Toul. It has an amazing hanging corrie, so always easy to spot from the east. From the west it looks like a toblerone with the point knocked off.

Indeed it is Cairn Toul

Thanks for the confirmation Fraser. It was a zoomed shot of the horizon.

Simon
Great write up with lovely photos to match. I walked in through the forest road and past Prince Charlie’s house if I remember .

Re UR5IRM - I too was surprised to work him on the 3rd of march.

Thanks for the excellent route description Simon. I like you was struggling to find a reasonable path description on the Walkhighlands website.

This morning I activated GM/ES-050 and Simon was first in the log on 2m FM, giving us both the Complete.

The WX wasn’t so fine (50kph winds), so I set up the EFHW across the summit, running the 5m of RG-58 down to a sheltered spot behing some rocks. 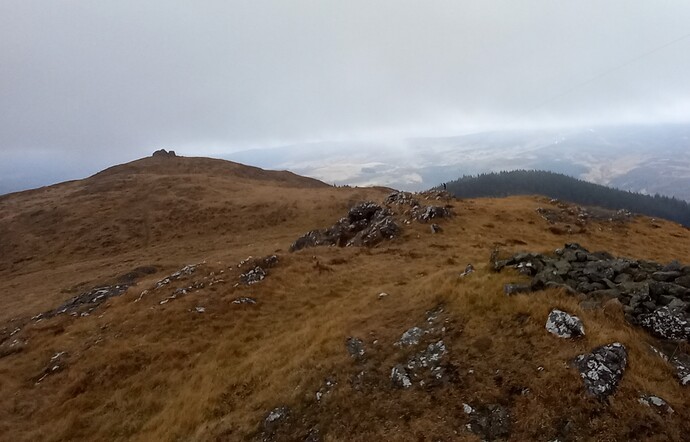 It was an early activation (0915z) but 40m was opening up nicely to Italy and Spain, along with 20m to Greece. Three summit to summits in the log too and a total of 40 contacts.

I headed down at 1040z, jogging back to the car in 30 mins. The aim today being a fast and light activation before heading off to work. I was pretty pleased with the minimal kit carried. 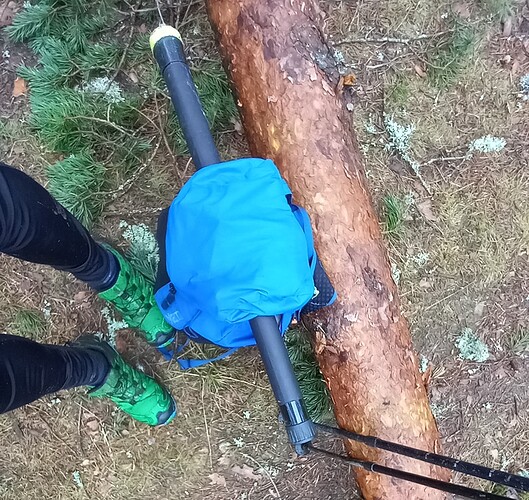 I wasnt feeling so pleased when I unpacked the kit back home. The 49:1 wasn’t in the bag. I guess it’s still on the summit. . .

Thanks again for the activation and write up, always a splendid show of photographs. 73 Don. 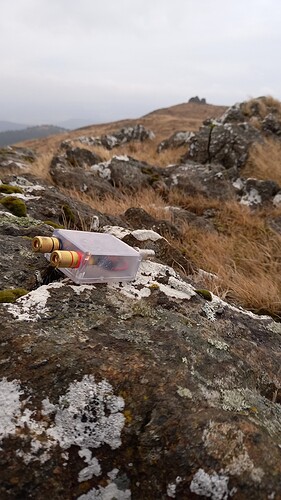 This was my first HF SOTA chase (2M0IIG) so I’m really pleased that worked, I was very surprised to get that on 17M. I expected to get most local folk on 40M.

(Been on HF only a month, so still learning about propagation etc)

Edit: as an aside, since passing my Intermediate in November one of the things I’ve needed to do is update accounts etc - Can I get my username changed here at all? Or is a new account better?

Can I get my username changed here at all? Or is a new account better?

Check with the management team(MT) - Andy MM0FMF is probably your best bet.

This was my first HF SOTA chase

Glad to be your first! One of many to come,I’m sure