This was a hill where we both knew there might be sporting activities on the hill and had a contact phone number (01356670208 after 6pm or between 7am and 8am): in this case we got through to a real person who told us that Hunt Hill would have stalking on Thursday, but not Wednesday or Friday, and thanked us for asking. So it would be Hunt Hill on Wednesday.

For the second day running we drove to the car park at Invermark at the end of the North Esk valley. It was another lovely sunny day as we headed past the little church at Invermark: hoping we might have time to visit on the return. Where we had turned right yesterday we carried straight on over the bridge over the Water of Lee, having a look at the water management there. Taking the left hand track we soon passed the impressive ruins of Invermark Castle to head through pleasant woodland towards the little settlement of Kirkton. Here there was another scenic ruin: a ruined church whose churchyard had Loch Lee lapping against the churchyard wall. This was followed by scenic sunny walk along the track running along Loch Lee. 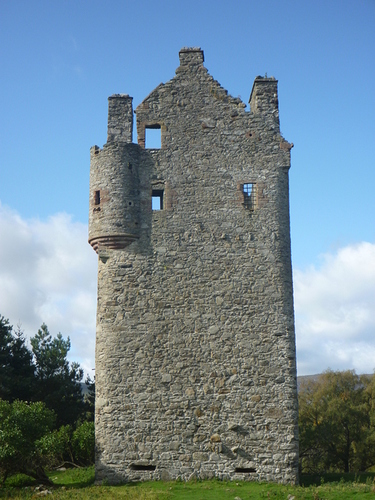 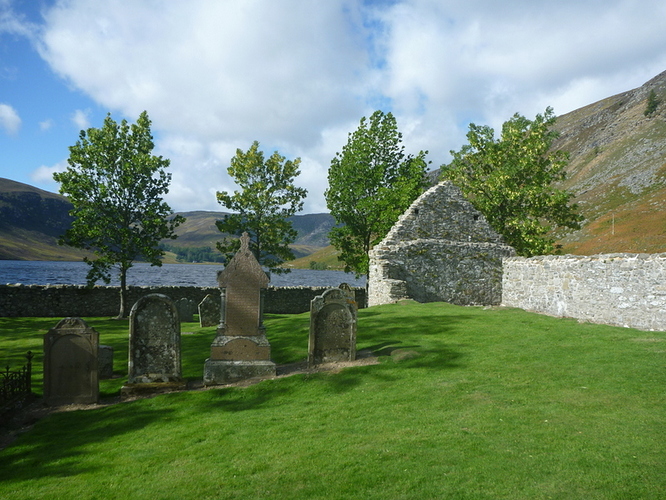 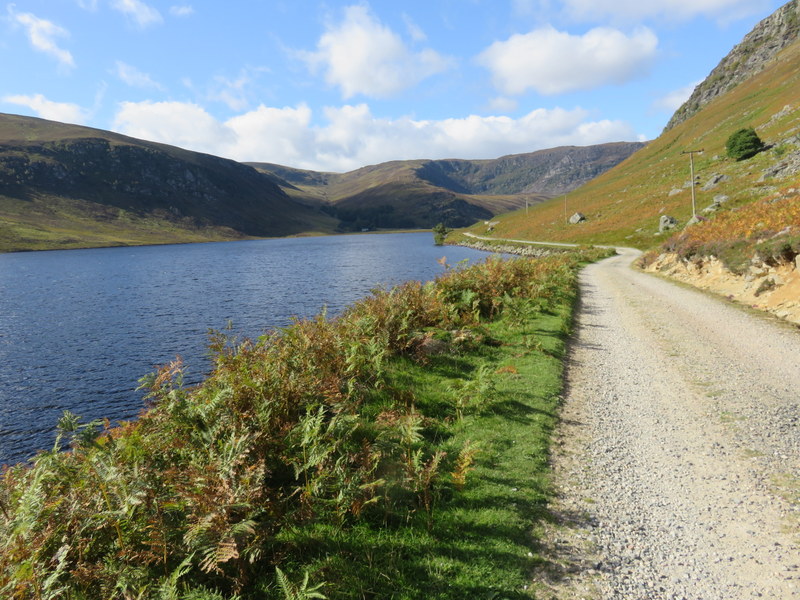 We had looked at various routes for Hunt Hill, and in order to have time for a reasonable activation were aiming to go for the shortest possible. At the end of the Loch we carried along the track along Glen Lee getting our first views of Hunt Hill which had been hidden behind the impressive lump of Craig Maskeldie. We had originally intended to carry on along Glen Lee when it bent north and then east to approach Hunt Hill along its north spur, where we understood there might or might not be a plank bridge or stepping stones across the river. However, as we started to bend north we noted the footbridge at NO395804, and there looked to be a faint path through the heather beyond it leading to the right of the outcrops of Dog Hillocks. Deciding the terrain looked plausible we opted of the certainty of a bridge we could see and hoped there weren’t going to find impassable outcrops beyond what we could see. Unfortunately, once over the bridge the faint path soon faded, and although we through we could see it again higher up it proved elusive. However the vegetation wasn’t too difficult to cross, though it was steep, so we needed several stops to take in the views, spot some hares and regain our breath. Thankfully our gamble paid off and we gained the ridge to the north of Dog Hillocks with no difficulty. From there it was a gentler pathless slog to the rounded lump of Hunt Hill. 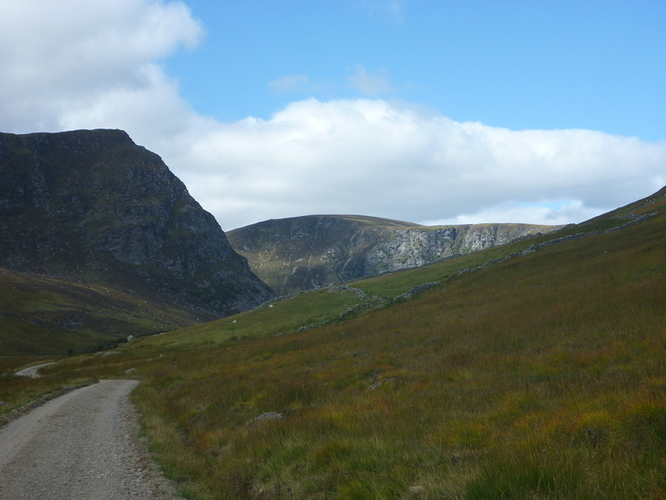 The summit is marked only by a smallish white cairn, with views dominated by Lochnagar WNW and Mount Keen NNE. It was less windy than on Mount Keen the previous day, but we still needed some relief from the wind to set up our stations: on the rounded summit the best we could manage were some peat hags just below the summit. 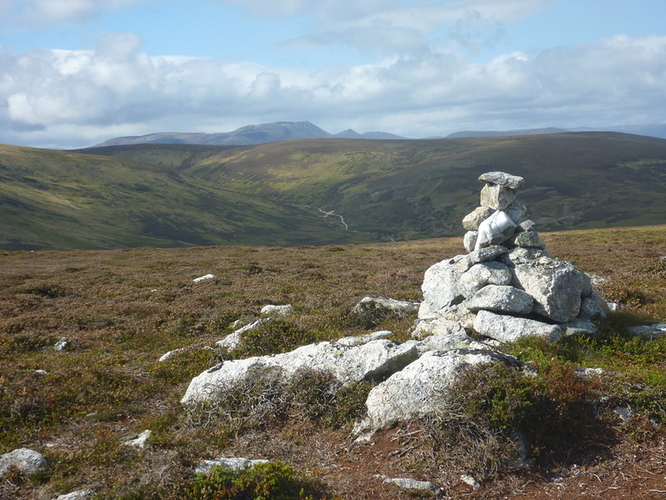 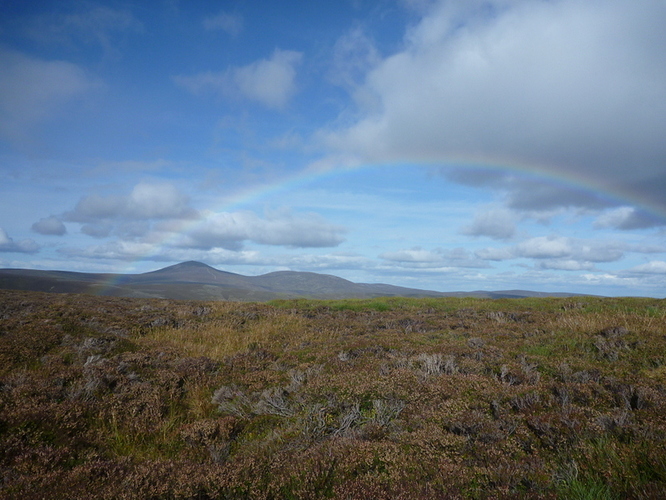 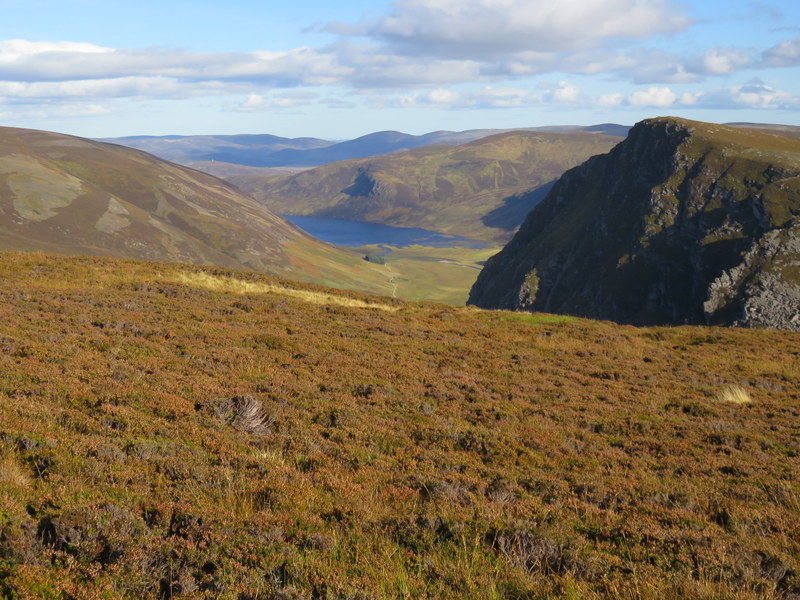 The odd shower passed by: enough to produce a faint rainbow but not enough to seriously trouble us. Caroline again struggled on VHF, getting just two contacts: one of which was an S2S with new mountain goat David GM0EVV who was on ES-002 Braeriach. Martyn did a little better on 5MHz, with 7 contacts before Caroline took over the HF station for 11 40m contacts. 20m was again poor, Martyn getting just 2 contacts. 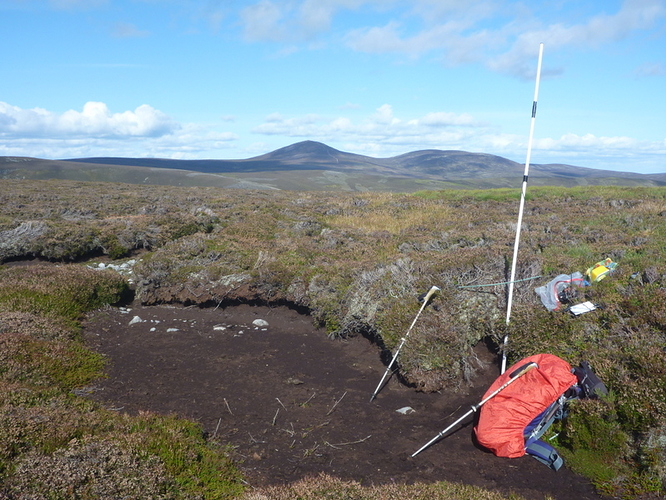 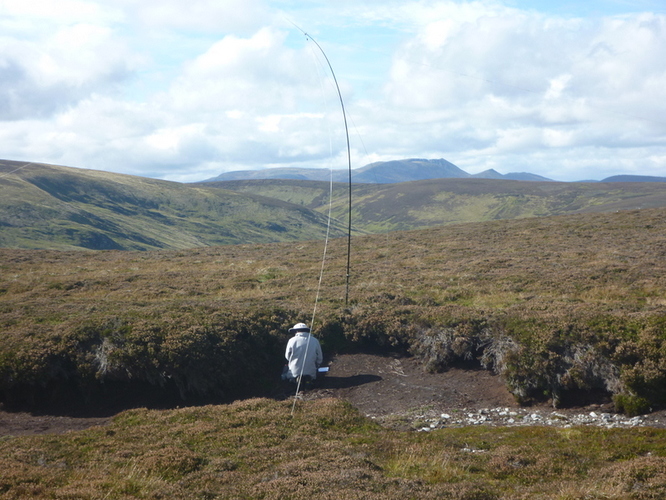 For our return route we headed off the hill slightly east of south heading along the cliff edge, looking for a stalkers path which we believed would double back to pass the Falls of Unich. This is where the problems started. The first little path we found was clearly too soon and led only to an impossibly steep area. We climbed back up and carried on a low point where a slope looked to be heading back in the right direction, but despite following signs of where feet had been previously this also led to an impossibly steep drop where we could see a path in the valley below, but no way to get to it. So we climbed back out again. We had now wasted a lot of time and were getting worried about getting back – though we had head torches and were confident that we would be OK navigating the Glen Lee/Loch Lee track by their light. Did we retrace our steps and climb back over Hunt Hill or find another way? A look at the map and it became clear that from where we were the best route back would be down the Shank of Inchgrundle: a route we had previously decided would be too long!

We crossed a stream and picked up a faint path which grew stronger as it approached the footbridge by the Falls of Damff. Once across we had initially intended to head south to pick up the extension of the track running down the Shank of Inchgrundle, but there was a path heading roughly east, which was a reasonable direction, and we preferred path to no path! This lead us to a viewpoint over Loch Lee around the 645 spot height which was worth the diversion even though we didn’t have time to stop to take it in for too long. We then found another faint path which led a little way from the cliff edge of Cairn Lick to pick up the track down Shank of Inchgrundle: the views were worth the extra distance, so we wished we had been there earlier! Part way down we were passed by another walker when we had stopped to deal with one of Caroline’s walking poles which had collapsed and was being reluctant to stay in position. We weren’t the only ones late on the hill. He was walking faster than us anyway and was soon out of sight. It was a good walk, though we didn’t have time to linger over it, making it back to our outbound track around 19:30. We allowed ourselves the luxury of an apple to refresh ourselves as we route-marched along the Loch, just managing to get back to the car without needing the head torches at about 20:20. We never did get to visit the church. 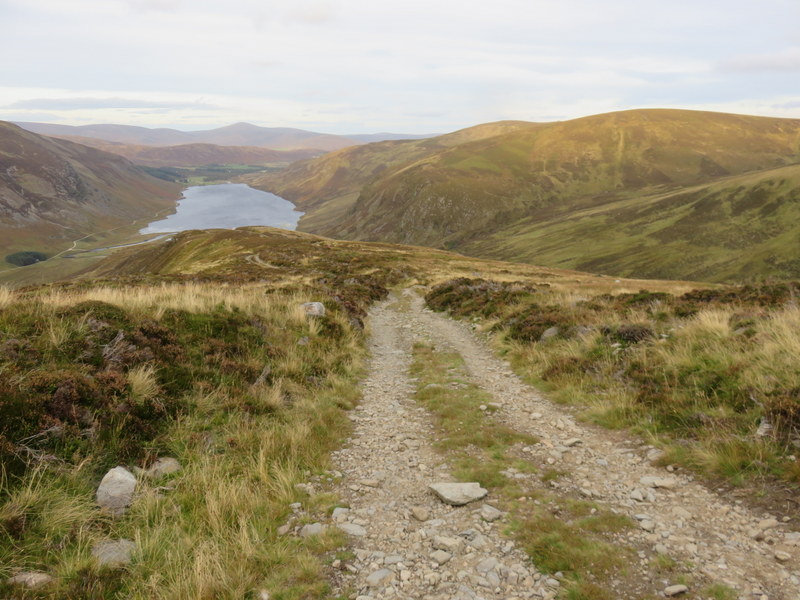 Those pictures make it look as nice as Barry GM4TOE says it is.

Those pictures make it look as nice as Barry GM4TOE says it is.

It was pretty good, I think we can recommend the route we took, except for the futile attempts to get down to Falls of Unich. There might have been even better views by keeping closer to the cliffs above Dog Hillocks, Bruntswood Crag and Earn Crag, but the wind deterred us from being close to the cliffs. I think that there might also be fine views by making a there & back ascent of Craig Maskeldie from the 645 spot height, but we definitely didn’t have time for that.

A couple more photos to encourage you: 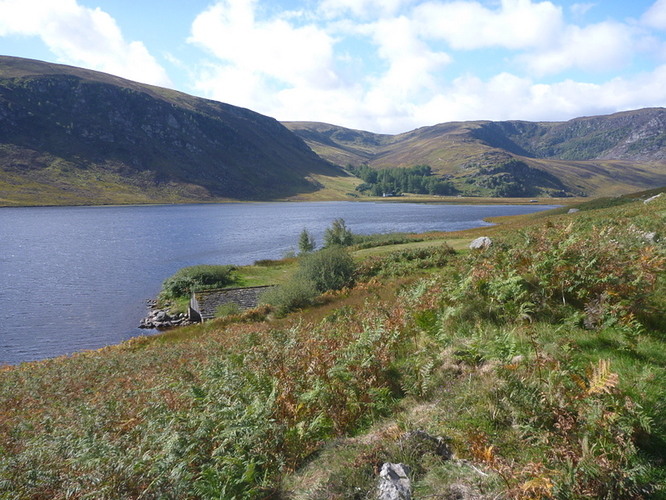 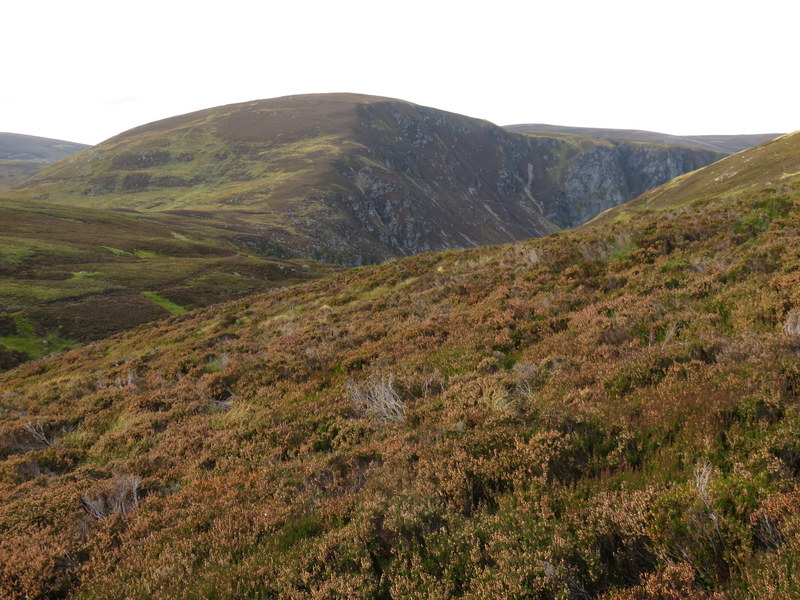