Introduction:
John - M0WIV, inspired this activation after his comment on my last report on the WS293 activation. It was the first I’d heard of WS339 but thinking about it, maybe it was the one mentioned by Robin GM7PKT on 2m-FM the day before and GM4NFI David’s local summit. The problem is tying up the pronunciations of these Scottish summits with the SOTA ref.

Anyway after a lazy morning doing a SOTA report etc, I needed a walk. Normally a stroll from the hotel would have sufficed but when I looked this summit up I realized that it was close by and would make a worthy target in the two or so hours available before evening meal. My wife, who has MS and suffers MS fatigue, retired to bed for her afternoon nap at 15:00 so without even bothering to change into walking clothes, off I went to the car park to collect my rucksack just in case I wanted to activate.

Route and Execution:
Leaving the Highland Hotel car park in Fort William (NN 1014 7369) at 15:16, my first challenge was to find a way onto the road above the hotel; Cameron Road. Down where the hotel driveway meets the road there is a snicket going uphill onto this road. From there it’s a hairpin right and head for Lundavra Road which goes south out of Fort William. It’s the same road as used for WS293 the day before and uphill all the way. After just a few yards the day’s rain started.

A dog walker directed me to the gate where the path leaves the road - NN 0969 7210 by 15:40. This is opposite a viewpoint that overlooks The Ben. By now the rain was set in so from then until the end I used a brolly.

This grassy top has a shallow dip on the side overlooking Loch Linnhe about 25m beyond the trig point. This assessment was made rapidly as I wanted this activation over as soon as possible. It was not only chucking it down but also circumstances had pushed this activation very late into the afternoon.

Reeling out the 80m link dipole over wet tussock in the rain took a bit more effort than on flat grass but I was ready to go on the air within 15 minutes. That included the brolly as a shelter plus a self spot. While trying to provide the latter I was stumped by a notice that the spotting app had been updated and it didn’t work anymore. Now, what had my son told me to do when this happens? After fiddling around for a short while the system functioned as it should. Since 20m had provided eleven easy contacts the day before, that’s where I headed again today. I had no log sheet for this summit so one had to be improvised.

14.052.6CW - 4 QSO’s: Using 50 Watts I called CQ briefly but the self-spot had done its all-important work: In the log inside 5 minutes were: HA7WA Viktor; F8WBN Christian; EA2DT Manuel and EA3BV Jon. Christian came in twice as he can’t have been happy with the first QSO. That’s the thing to do. If in doubt confirm it. I just repeated the QSO and he was happy.

Reports ranged from 599 to 559 but according to my son, who must have been looking at SOTA watch, I was inaudible on the Andorra receiver despite being 599 the day before. He tried a few others but without success.

The Descent:
After a bit of a struggle rolling the dipole up and taking the mast down while holding an umbrella any way I could, it was time to beat a hasty retreat as they say. A simple backtrack of the ascent route took 38 minutes back to the hotel car park at 17:14.

Observations:
The activation of WS339 felt rather strange. No driving or any great preparation was undertaken. An easy to reach summit even walking from Fort William with the option of driving to the viewpoint at NN 0969 7210 (149m ASL) and taking directly to the path. In that case ascent would be 139m or 456ft with a distance of just 2 x 1.2km or 1.5 miles in total. It was far from pleasant in the rain but I got the exercise sought, being not used to going a day without a walk of some kind.

Unlike when SOTA started in 2002, it’s not that often nowadays that only the bare minimum is achieved but 20m CW got the job done and I am grateful to the four chasers worked. I expected more but a QRZ at the end plus two full-info CQ’s produced nothing further. In this case I wasn’t disappointed. It wasn’t me getting wet that I was most bothered about but all the equipment, which must live to fight another day. Everything is now spread all over the hotel room to dry out. Had the weather been better I would have brought out the handie at the end to call Robin GM7PKT. I reached into the rucksack then thought better of it. It’s not waterproof and a lot of water was coming off the umbrella.

This is a nice summit and one that I would like to revisit in good weather. Meanwhile it’s been tried out so to John M0WIV – thank you very much and I think you’ll enjoy it.

Thanks to the four stations worked and for the SMS spotting service – essential today. 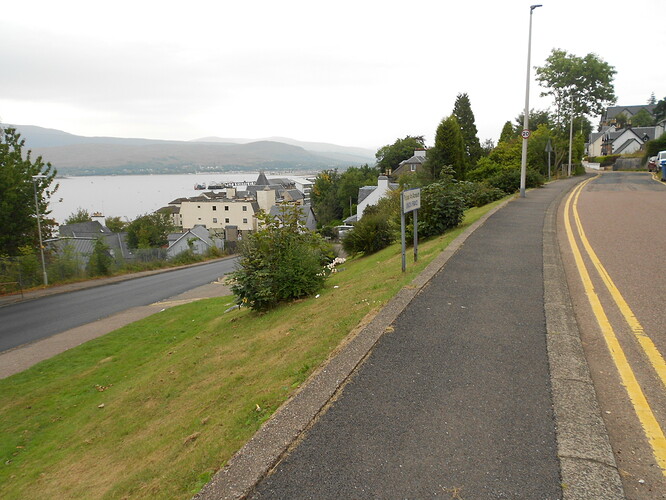 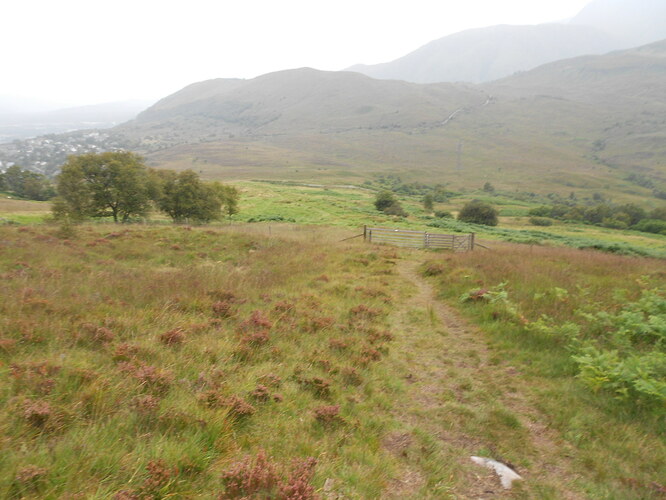 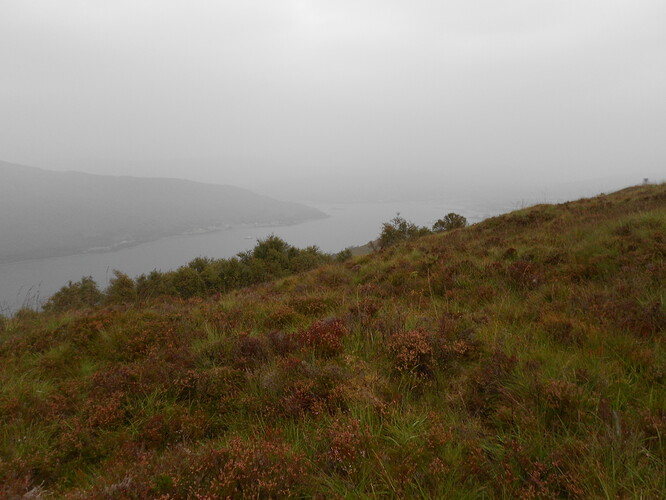 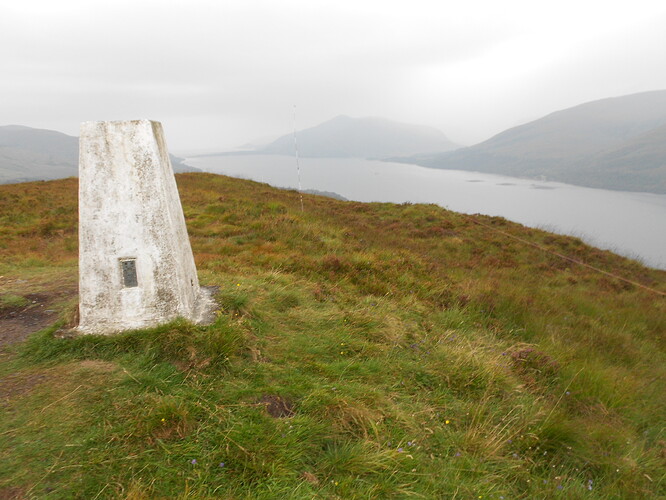 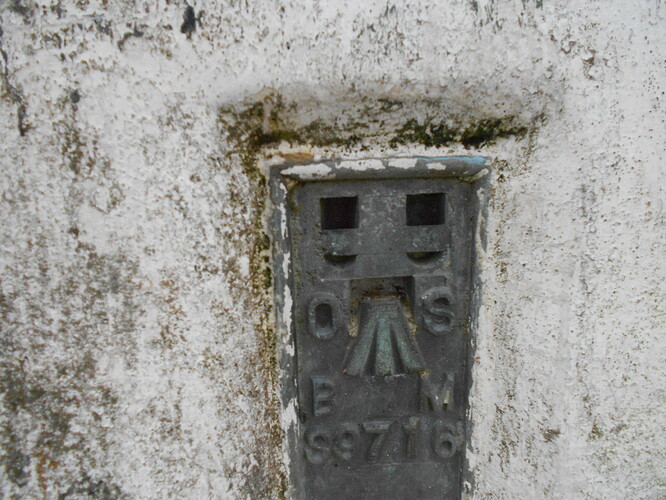 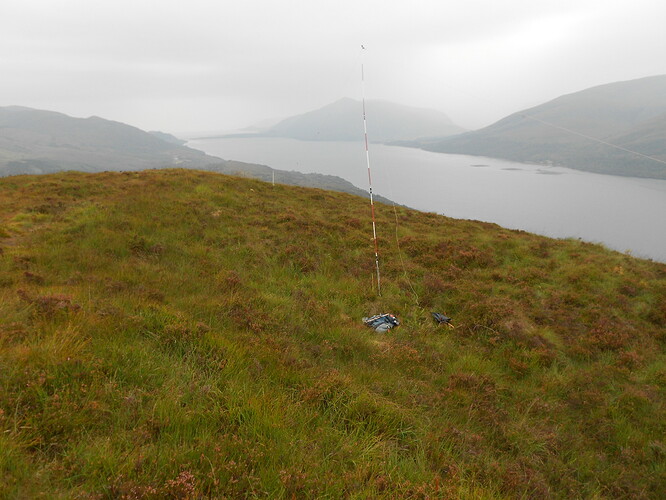 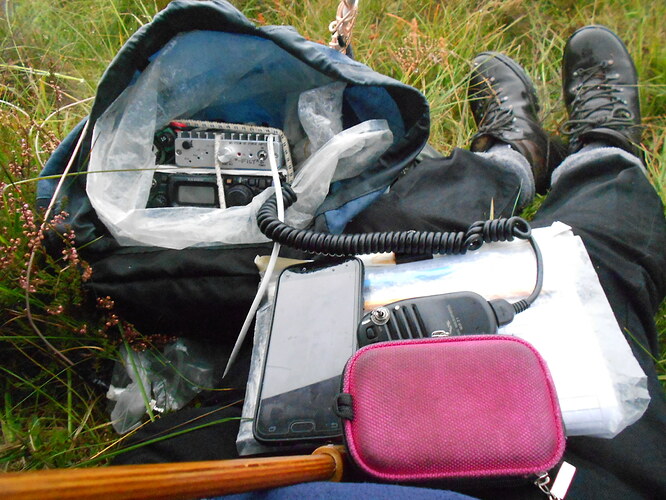 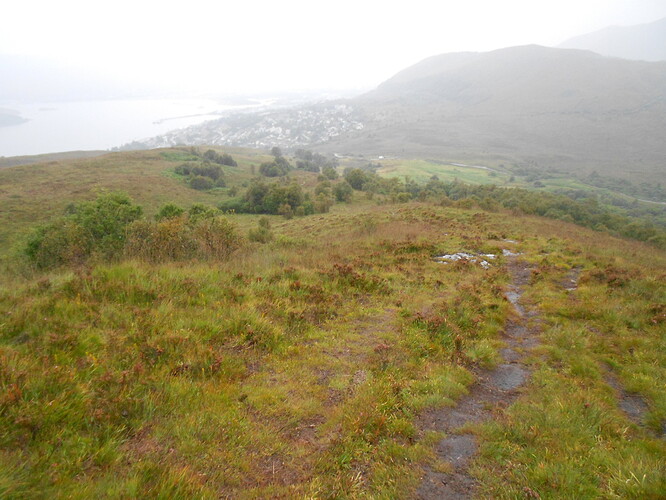 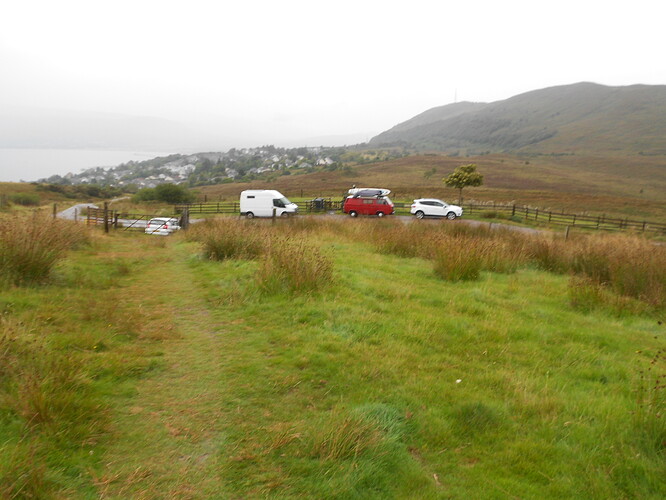 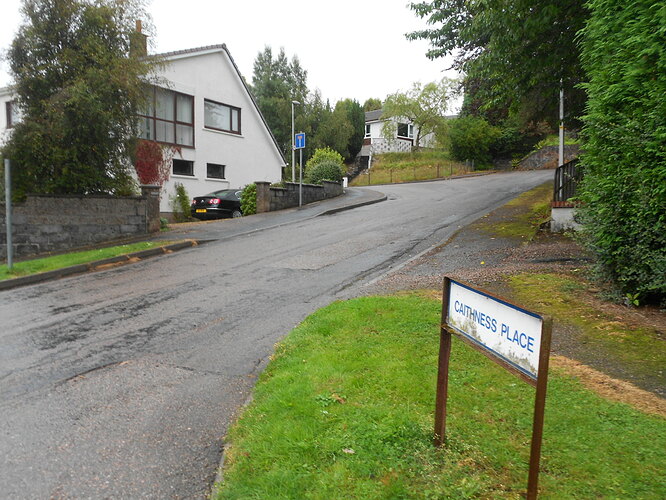 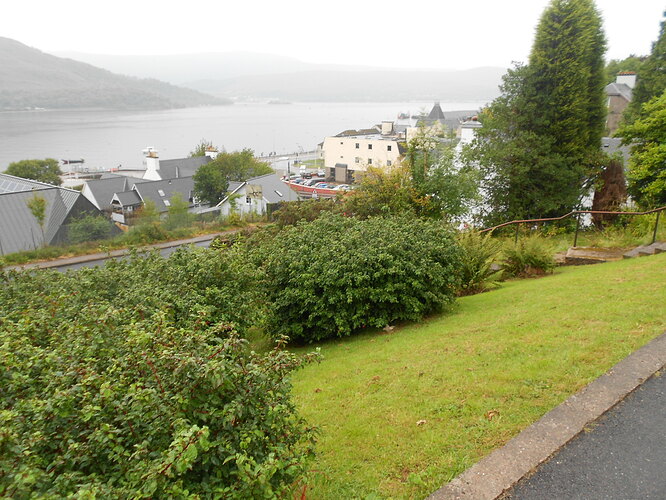 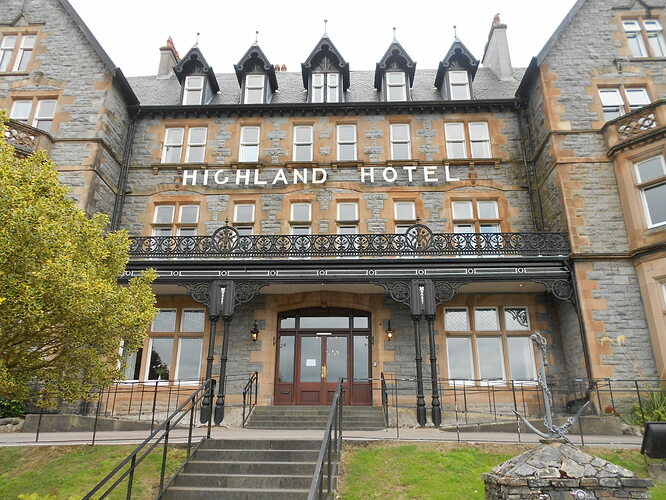 There are two map sites showing the location of all 158746 SOTA summits. Well worth looking at both of them. One has a range function so you could ask it to show you all the summits within 25miles of Fort William for example.

The problem is tying up the pronunciations of these Scottish summits with the SOTA ref.

Just like most words, you say them as they are written.

Nice, John! I was going to bag that one last time I was in the area, but it was sleeting the day set aside for it so we visited a waterfall instead. Rain I don’t mind, snow doesn’t bother me, but sleet is an invention of the Devil!

Just like most words, you say them as they are written.

Once you know the rules!

FB the summit is just above my QTH 20 min walk (when I was fit) from shack to summit.
You must have noticed my hexbeam as you go down from the parking spot?
Pitty I missed you but I was QRV on 40M
Were the midges not vy bad?

Reply to ALL:
Thanks Andy. I will see what can be found for our final day here. On the other hand I could be lazy and just do tea and scones with the missus.

Hi Brian. I wholeheartedly agree. Since SOTA began and I did so much of it in winter, I came to fear temperatures between about 1C and 5C the most. One of my worst experiences was putting on the Gable range’s three 8 pointers. There was a lot of cold rain and sleet and I got chilled badly on Pillar with 5W of HF when two QRO stations nicked my freq. and started a QSO. It took a long time to shift them and carry on. No phone spotting back then. Sleet IS an invention of the devil indeed!!!

Hi Dave, Yes I think Robin GM7PKT referred to you being close to this one. I am green with envy. I have wished for many years that I could have a SOTA placed in my back yard but nobody has so far moved a spare one over from the Yorkshire Dales or Lake District to Scarborough for me. What luxury to walk daily (in my case with a dog) from one’s own doorstep. I will have another go at spotting your aerial as I’m not known for my observational powers.
Midges have been non-existent on all four I have done so far - THANK GOODESS!! They are terrors but we have avoided mid June to early September for many years of holidays in GM. It seems to work most of the time.

Thanks for all the replies and 73 from me.
John

On the other hand you could move next to a SOTA summit. There was a post on here not long after I got started about who lived nearest a sota summit. Now I remember it was “titled something like’; How many sota summits can you see from your window?”

Either way there must be lots of farms mostly, living on the north side of hills and get very little sun in winter. I wouldn’t like that.

But there’s often a down side a down side of getting the ‘ideal’ location… When we came back to the UK 12 years ago we looked at a house next to the R.Esk (North Yorks). Wow, I thought. I enjoyed fishing and own 3 canoes and love canoeing. What more could you want? Until we looked at the flood levels cut into the neighbouring chapel walls. Some of the flood marks would have meant I could canoe from the garden into the house!!! Once in a hundred year flood wasn’t something that appealed to us. Especially as they were becoming more frequent.

So for living near a hill you just might be in its shadow and rain shadow too.
t.