INTRO:
We were invited to stay with friends at their new house in Sedbergh from 31st October to 3rd November 2015. NP22 is more or less the closest SOTA as the crow flies and I could have climbed it from Fellside Farm as in 2003. That would have taken longer so I elected to drive around to Barbondale and tackle it via my usual route from SD 6832 8645, which is 2km Southwest of Gawthrop. The drive around takes about 25 minutes.

EXECUTION and ROUTE:
After promising to be back in Sedbergh by 17:30, I set off walking at 12:50; through the gate and along the track to a kissing gate (which has recently replaced a ladder stile) at SD 6835 8680. From there a quad bile track goes parallel with the field boundary, eventually climbing via a gate at SD 6796 8705 to SD 6783 8716. I leave the track just after this, turning left at SD 6767 8707. Between here and the stile giving access to the summit ridge at SD 6738 8691 it is mostly just grass with little in the way of paths to follow. Once on the ridge it is a simple matter of walking along the path which follows the wall up to the trig point. It’s not steep but the final distance is more than a mile.

I arrived at the summit at 13:39. The sun shone from sunrise until sunset that day so blue skies and great views were the norm. I would shortly discover that the rest if the country was mainly under thick fog. There were three people already there but they left shortly before the activation got underway.

After the other walkers had left, I set up about 20m from the trig point not far from a large hole in the ground. Though a collection of rocks occupied one side, it did occur to me that this depression might be sufficiently large to take a tent, should anyone chose to spend a windy night there?

There just is sufficient soil under the heather near the derelict wall to stick a mast in and get it to rotate. None of my antenna supports are guyed. The beam was set vertically on the top section which is transparent to RF; the lower two being carbon fibre. The RG316 coax spirals down the mast. After connecting the 25 Watt mobile rig, the beam was initially aimed South. Other beam headings were tried later.

145.500/ 145.400 FM - 34 QSO’s:
After phoning Roy G4SSH for a spot which gave chasers a five minute warning, I checked that the announced S16 channel was clear then called CQ on S20. Immediately Geoff G4WHA/A came back from Penrith. Since Geoff can be very busy with customers in the shop, we exchanged reports there and then (53/ 41) only taking around five seconds. With Geoff safely in the log, I QSY’d to S16 for the rest of the activation. First up on S16 was G6LKB. After seeing Roy’s five minute warning, Dave got busy looking up NP22’s Trig Point designation for me (TP1875).

I knew I had two hours to spare so there was no need to rush through the QSO’s. Between 14:00 and 15:40z I worked no less that 34 stations which were probably 24 more that I’d expected. Mostly they called me in groups of three or four. As usual I acknowledged all I could hear then called them in one by one after giving the station information once at the beginning. This mostly worked but it risks losing stations in QSB. Despite a delay of just 30 seconds, that happened to M0NTC/M possibly not in QSB as such but possibly when he drove behind an obstruction and initially to G0BIN too. Apologies to Gez but I did manage a QSO with Phil - G0BIN 45 minutes after losing him.

Eventually the frequency dried up and I was very pleased with what I saw in the log. Best DX was Somerset and Gloucestershire but I also worked Eire and Herefordshire, both of which are out of range from NP22 with simple equipment under ‘normal’ conditions. Obviously there was a substantial ‘lift’ on today. Turning the beam east to work G4SSH resulted in an ‘armchair copy’ QSO with Phil G4OBK. I later found that Roy had left his shack for a run out to the shops.

Unless I already knew them, almost all ops came in with a report, name and QTH. That makes things easier for me when it comes to entering QSO’s into the database later on. Power throughout was 25 Watts; the maximum available from the old Kenwood.

I worked Fred in Holmfirth which was a coincidence in two ways. Firstly I had been in Holmfirth only the weekend before, doing the Last of the Summer Wine tourist trail as part of a day out with my XYL Denise. Secondly, Fred M3CTW calls in on the Scarborough Amateur Radio Society net on 3.650 SSB every Saturday morning at 9am. He can rightly boast about his age too. At 95, he is as competent an operator as anybody.

Though we have had several 144 MHz SSB SOTA contacts in the past, this was the first time I have worked Frank G3RMD on 2m-FM and very pleased we were too.

70.450 FM - Nil QSO’s:
This was an afterthought. If I’d remembered earlier, it would have been a simple matter to set up a sked with 4m user Roy M3RDZ during our QSO on 2m. I called CQ using just the H/H and 5 Watts to an extended rubber duck but without success. Not even Roy was listening on this occasion. It was my fault for thinking of 4m too late but compared to what I had been using on 2m, it might just have been the lack of power and antenna gain which spoilt the 4m show.

OBSERVATIONS:
What a pleasurable afternoon out this turned out to be. Roy G4SSH had told me on the phone before starting that inter-G conditions on 40m (after months of waiting) were superb but who needs 40m when 2m-FM is as good at this. Without the certainty of being able to activate, I hadn’t brought any HF gear on this weekend break anyway.

The WX was perfect especially considering that most of the chasers worked were blanketed in thick fog and some rain was also reported. This merely encouraged me to describe my pleasant surroundings in ever increasing detail.

With the last activation a few weeks in the past, I was looking forward to getting back to a chat with some chasers. I wasn’t disappointed and the physical exercise came in handy too.

There have been a number of changes on Calf Top since I was last there in 2008. As well as a ladder stile being replaced by a kissing gate five minutes into the route, a small top-gate has been added above the steps at the ridge stile.

At the summit, someone has attempted to build a semi-wraparound shelter near the trig point using rocks from the fallen parts of the wall. I think I know why. Every time I have been there, the wind has been blowing along the length of the wall. Originally just bare concrete the trig point, bearing the number S5670, it has been painted brilliant white. Other than that, the roll of pig wire, to which I secured Honey - a borrowed sheepdog for the duration of five QSO’s in 2003, remains unchanged apart from further rusting. As for Honey; I saw her again on this weekend’s visit but she doesn’t like to walk too far these days.

Thanks to ALL STATIONS WORKED and to the spotters: G4SSH (initial telephoned alert and ‘5 minute spot’) and G4OBK who helped to re-ignite the pileup by spotting me later on. 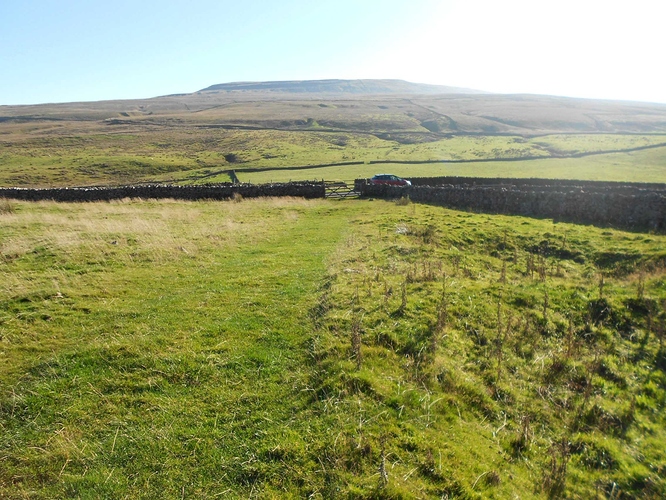 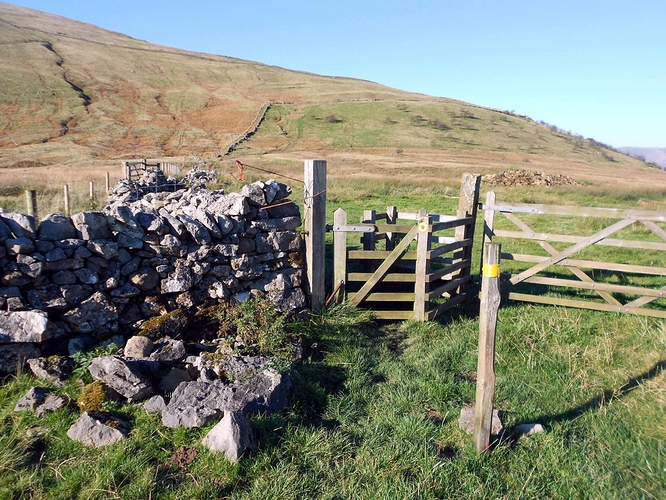 Above: The kissing gate 5 minutes in from the start and the route beyond. 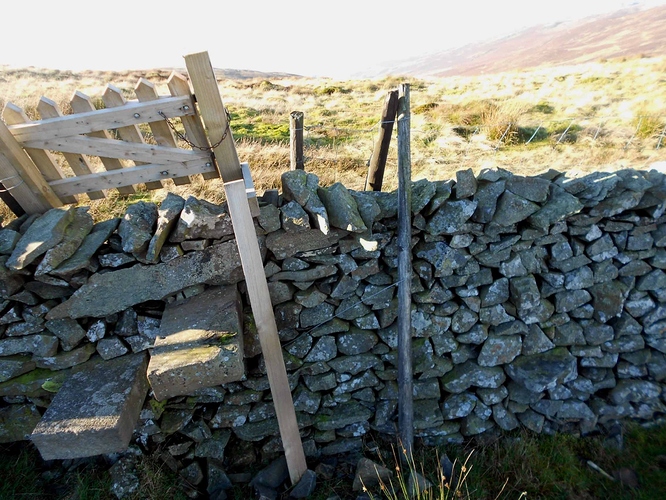 Above: The stile at the ridge wall complete with top gate. 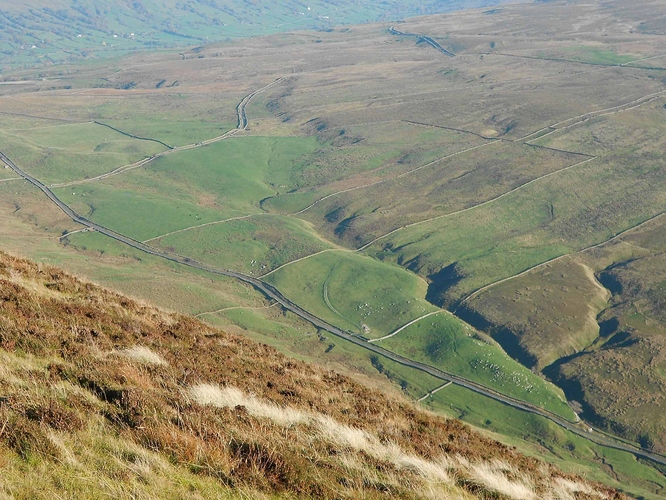 Above: The view down into Barbondale from the summit. The walled track leaving the photo at top right goes around to White Shaw Moss where Gt Coum and Whernside can be accessed. 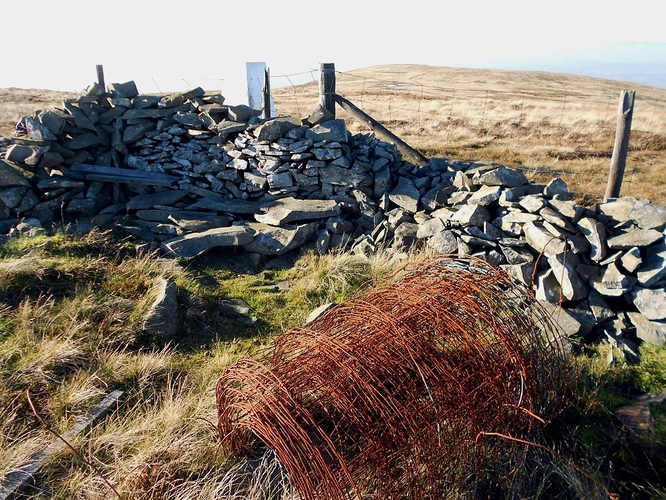 Above: The trig point TP1875, the slightly improved sheltering arrangements and the rusty pig wire. 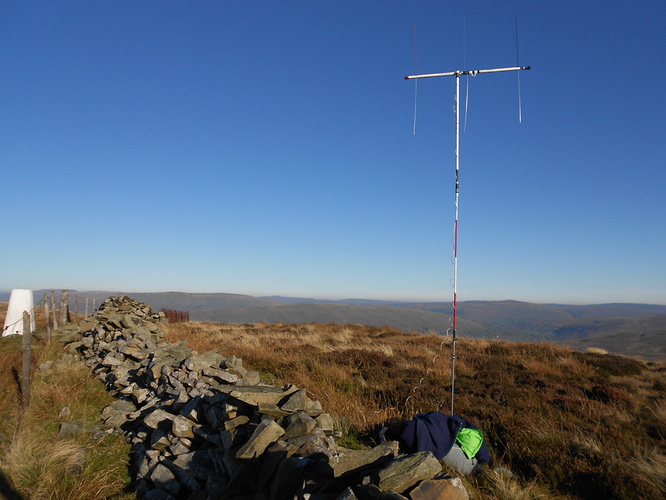 Above: Trig point at left and modified 3-ely vertical SOTA-beam. 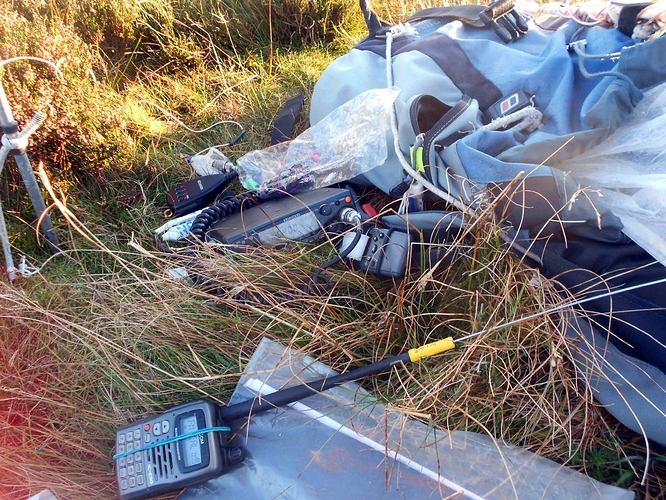