QRO Packweight: 10.9 kg including 1 litre of water & fleece with contents.

Intro:
Rob had a day off to spend with his wife Chris so today’s lineup consisted of Roger, David (group leader) and myself. Today’s set route was Carrock Fell and High Pike from the east and our start time was 10:20. Plenty of free parking on a flat area near the road close to a ford just NE of Carrock Fell is available. (Ref NY 3504 3496.)

This is not the most efficient way of knocking off LD23 and after the day before, barely qualifying LD20 using 2m-FM, I wanted to take HF QRO. Knott is poor on VHF and even the much higher Skiddaw ‘just across the way’ can be disappointing.

To help facilitate an easier return, Roger agreed to drive behind me in the morning to a convenient finishing point at NY 3270 3270, which is where I left my XYL’s car. This was at the end of the road that runs 2 miles west from Mosedale to a disused Tungsten mine.

Route:
The required path, a grassy track not fully marked on the 25k map, leaves the road initially at right angles before curving round via NY 3446 3492; NY 3406 3424 and NY 3403 3368 to summit Carrock Fell. This is far preferential to our former climb of this fell from due east at Apronful of Stones (NY 3538 3376.) That path is narrow, twisting and runs in eroded gullies through heather much of the way to the summit of Carrock Fell. It also starts 25m lower in altitude.

3.557 CW - Nil QSO’s:
Managing to get the dipole up in quick time I called Roy G4SSH at 12:45 BST. I wasn’t due to arrive this early but in fact I was too late for Roy. No worries, we had already exchanged texts and arranged to meet on 3.557 again some time after 14:30 when he would be back. With no alerts or spots in place, I wasn’t surprised when a few chance CQ’s weren’t answered The maximum available power of 50 Watts was used but after 15 minutes I QSY’d.

7.032/ 7.033 CW - Nil QSO’s:
In a VHF ‘desert’, with no phone internet facility, where could I find some QSO’s? Forty metres of course. I opened the link and as expected, 40m seemed a bit dead. Thinking that somebody might hear me I called in various places between 7.032 and 7.034. Yes at last! A reply from DJ9BX on 7.033 but he could get almost nothing from me and after a valiant effort, he gave up. Surely the band couldn’t so bad that a DL could make absolutely nothing of my 50 Watt offering?

I tried again, this time on 7.033 and after a further 10 minutes, back came Juerg HB9BIN/P. Great! At last we’re ‘cooking with gas.’ Not only a reply but one from a respected summit activator actually on a summit. Excitement and relief! The exchange of information seemed to go well. Juerg gave his ref as HB/LU-028 and I sent back G/LD-023 giving him 579 and getting a 339. One in the log at last but doubt filled my mind. Was there something wrong with the timing?

Another 10 minutes of calling on full power elicited a reply from DJ2MX. 559 both ways but once again I smelled a rat. You instinctively know whether you have made a genuine QSO or not and this one didn’t seem quite right either.

Eureka:
At this point I gave up and had lunch while sitting on the summit cairn but by chance I touched the heatsink on the linear, drawing back in horror. It was red hot - well not literally but it could have fried an egg. While sitting there dispatching a bag of cheese and onion, I finally twigged the problem. The LPF selector knob on the amp was still in the 80m position. 40m should have been selected and all I had been doing with my supposed 50 Watts of RF was cooking the amp.

What an idiot! The amp I used before this one incorporated auto band changing but the lighter one doesn’t. I set now the thing for 30m in anticipation of my next QSY and in the hope of finding QSO’s on 10.118. The two respondents had been working someone else entirely which explains the slightly wrong timing whilst giving the impression of a normal SOTA QSO.

More trouble:
At this point the mast, which I had poked into the diminutive summit cairn decided to fall over. I put it there because no matter where you go on Knott, there is only 3cm of soil over rock. Re-erecting the mast and lifting the largest rock that the cairn could provide to lean against it, I now slashed my index finger on its razor sharp under-edge. With blood dripping I started to think that this just wasn’t me day and that the gods had it in for me. A rummage into my fleece pocket found a plaster. I hope the blood stains come out in the wash!

10.118.7 CW - 9 QSO’s:
An hour and a quarter after arriving and I still hadn’t made a single QSO, confirmed the following day by a complete absence of my callsign in the HB9BIN/P log. Surely 30m CW would provide at least four QSO’s?

At 12:45z I called CQ and was soon answered by our old friend Kurt - callsign HB9AFI/P. At last this was a real QSO. It wasn’t hard to tell - he called me ‘John’ and we exchanged easily with 579 both ways. Kurt was on HB/VD-032 which was an excellent, though much delayed start to the activation. The amp works as the manufacturer intended when you select the right filter! It also turns out to be rather robust when you accidentally abuse it.

After Kurt I went on to work: SM2CEW; SM7DIE; DH3MIT; F5RGY/P - S2S on F/MC-158; DL2HWI; DL3HXX; OE7PHI and DL2EF. Incoming reports were 549 to 599 with a 339 from Frank at the end. IZ8GCP called me but he never got my report. A QSO with SM0NTE seemed good at first but after sending his report several times, repeating each time, I heard ‘Sri, No Cpy.’ I tried some more but in the end the QSO had to be scrubbed and I can’t find this callsign in the SOTA database to check.

3.557 CW - 2 QSO’s:
30m dried up close to the time that Roy was due back from lunch. Sure enough immediately I landed on 3.557 at 13:22z, I heard ‘G4SSH’ being sent. Roy came back first call with a 339 report and that had increased to 559 in QSB by the end of the QSO. Next in was Phil G4OBK who gave me 589. Knowing that Roy would spot me, I waited a minute or two before proceeding but none of my subsequent 50 Watt CQ’s were answered. I didn’t think to ask Phil for a Top Band sked. A missed opportunity.

3.724 SSB - 10 QSO’s:
Ten UK ops called me in SSB starting with G0RQL in Holdsworthy, Devon. Don is quite often listening for the QSY to SSB and today was no exception. WAB members worked consisted of: G7AFM Phil; G4IAR Dave and G0FEX Ken (the WAB Mag editor) but I could only offer the square as Knott does not have a trig point. Also in the log: G0WHO Bob; GI4ONL Victor; M0EMM Dave in Telford; G4SSH Roy in Scarborough; EI9GLB Jim - Ballycanew and G4WHA/A Geoff at the shop in Penrith - only just hearing me at 37 in his self-made QRN.

G0WHO:
A mutual friend of Roy and I, Bob - G0WHO in Scarborough called in. We exchanged at 58 both ways and he seemed quite surprised at how well the propagation was running on 80m. Bob like myself, is a Scarborough Amateur Radio Society member and runs the training of new amateurs. Ably helped by others now and in the past, he has been involved in more than 100 successes, one reason why SARS is on the ‘up’ at the moment. Some of the ‘new blood’ are very enthusiastic and though SARS has never been short of technical support, they have expertise in areas that the club can make good use of. Bob is also a keen fell walker and investigator of local footpaths to record their state.

Descent:
In 2006 when we did this walk as a group, I was faced with 6 km of hard road walking the Mill Inn in Mungrisdale. That time my activation was so short that I was ahead of the group which caused all kinds of confusion. This time I was exercising the luxury of having had my car dropped off in the morning at the closest possible point to Knott at the old mine 2 miles west of Mosedale bridge.

The descent was routine but it’s best to take the trouble to walk back up the Cumbria Way as far as the hut before turning east down the valley. That is by far the better path; the one running along the south bank of Grainsgill Beck is not up to much being narrow and through heather a lot of the way. I stopped briefly at the old Wolfram Mine near the end of my walk to photograph the information board which has appeared since my last visit.

Arriving at the road end where the car was parked (NY 3270 3270) in hazy sunshine at 16:01, I saw several people swimming in the river and later at other points along the valley on the drive out. This time I was too late for a cool drink at the Mill Inn. My two companions having finished their walk in good time had passed through and were by this time back in Keswick.

Comments:
With HF conditions in the doldrums and VHF often a struggle from here, I was never going to set the World on fire in terms of QSO numbers. So it transpired. 22 was a meagre QSO count considering the summit time of close to three hours and with 50 Watts available. It didn’t help that I arrived minutes after Roy G4SSH left for a lunch appointment. I should have phoned him just before arrival so a ‘QRX time spot’ could have been put on. The Internet was down in most areas of Keswick for the first two days of our stay making alerting difficult.

80m worked to some degree but if it was getting in to Devon and southern Ireland, why didn’t more G’s turn up there. The answer is probably down to noise levels and/ or the fact that many private gardens will not take an 80m antenna.

30m got the Europeans in but again, I was surprised that there were not more. Perhaps fewer people are doing SOTA right now and are fed up with consistently poor band conditions particularly 40m.

This was a fairly long walk but I enjoyed the company on the way in. There was drizzle and a rain shower at the end but there’s barely need of a coat. When it’s this warm you dry out pretty quickly.

I had the resources to put on another HF band or even 2m-FM but I gambled on catching the other members of the group at the Mill Inn, Mungrigsdale. In the event I missed them. They were faster than even they anticipated. This was not the most satisfying of activations but I enjoyed the outing and got the 6 points.

THANKS TO ALL STATIONS WORKED. Also to Roy G4SSH for spotting and liaison. To group leader David for organising the walk and to Roger for transport logistics in the morning. 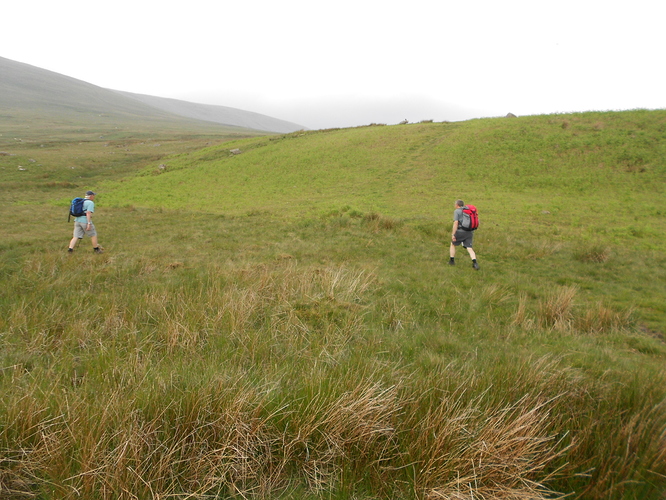 Above: Start of path to Carrock Fell from the NE. 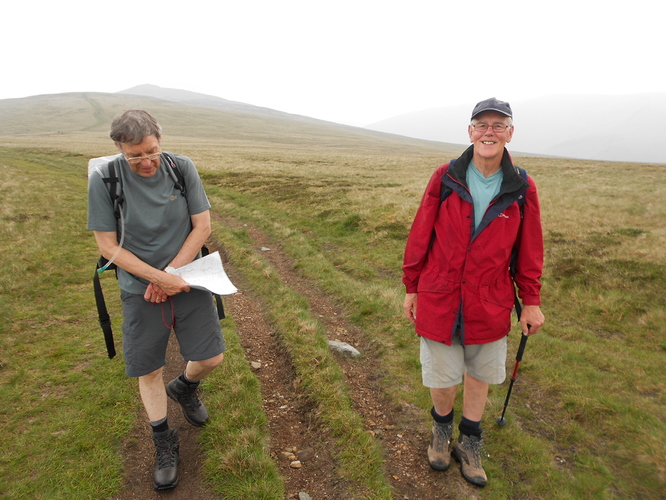 Above: David & Roger on the path to the Cumbria Way. Miton Hill & Carrock Fell behind. 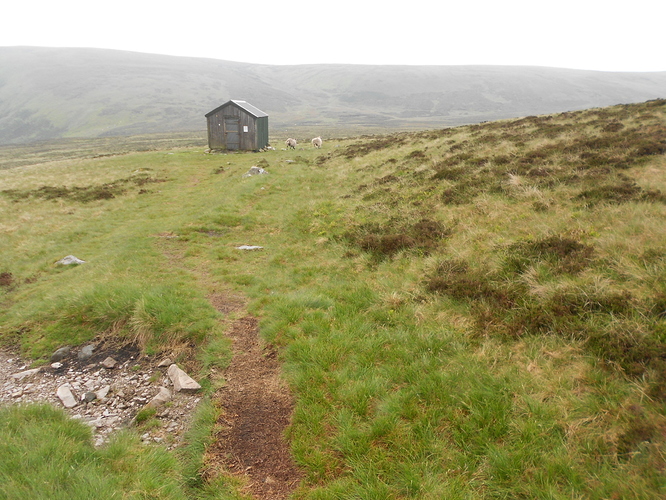 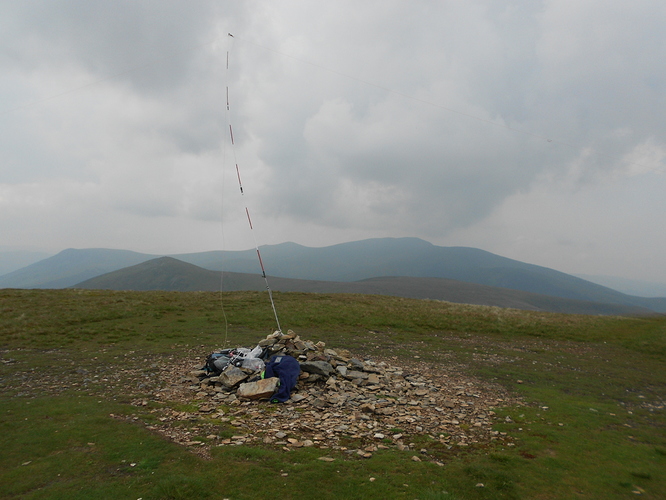 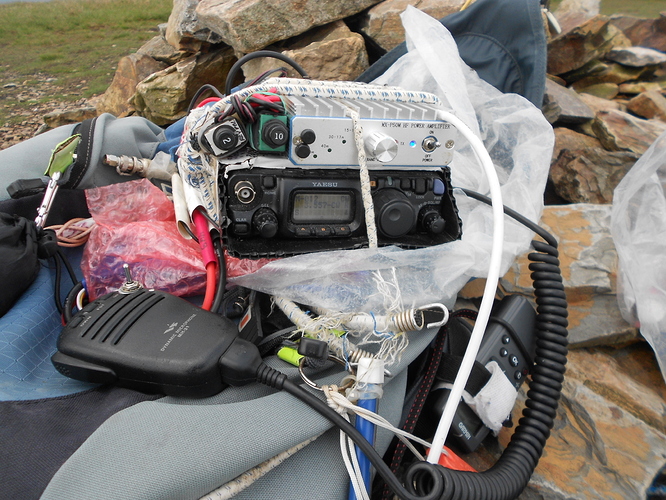 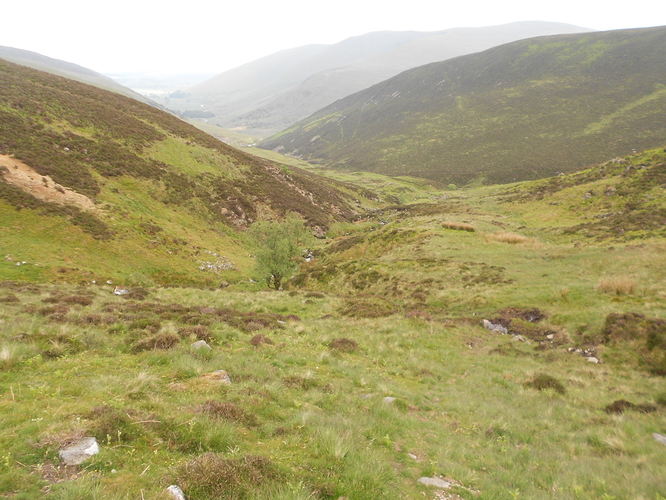 Above: The retreat down the Grainsgill Beck valley. 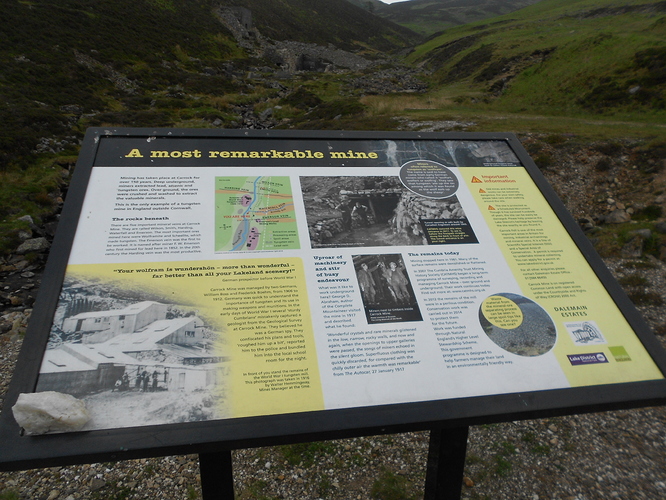 Above: The disused tungsten mine. Looking up Grainsgill Beck valley. 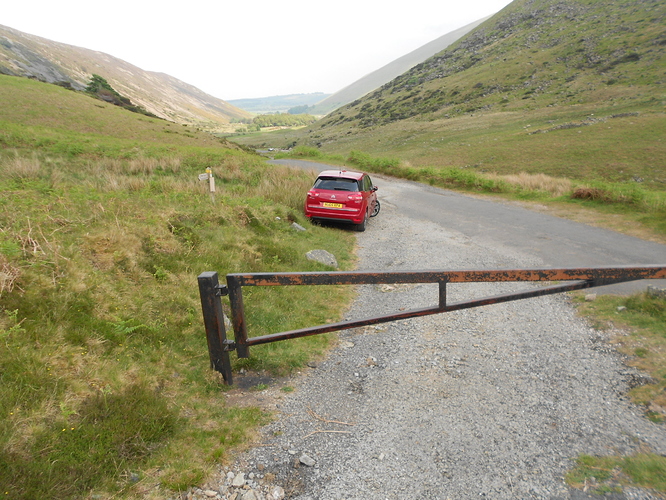 Above: Back at the car where the road meets the track to the tungsten mine at NY 327327.