Packweight: 8.5 kg including one litre of water & fleece with contents.

INTRO:
Yes, it’s Lakes Week again and the 14th time I have attended since 2002. We are thin on the ground this year. Four who might have been there had gone off on an Israel holiday. That and the fact we are all getting older and developing mechanical faults.

Walking today were a group of four consisting of Rob, Roger, David (our group leader) and myself. Start was 10:02 from Little Town. There was a mishap when Rob’s new Jag decided it was too wide for the tiny bridge just before the parking place. Nasty deep scratches in the doors and rear wing right down to the undercoat with the demon bridge unaffected. The pull-off at NY 2316 1938 takes about 8 cars plus roadside parking – a further 5. There were just three spaces left when we arrived but this was a Sunday. In the past, I have parked further up the hill at NY 2332 1949 in a little ‘alcove’ just large enough for a small car.

After walking up the road to find the path through a gate at NY 2337 1952, we climbed past an old mining adit and via Maiden Moor where I left the group behind at 11:25 to continue on over High Spy to Dale Head Tarn. Finding the final ascent path at NY 2297 1530, I arrived at the summit of Dale Head in a very sweaty state in high humidity, at 12:37.

I set the J-Pole up on its short mast by a rock with a hollow space under it. A fine seat, this is where I normally sit. The Moonraker MT270M was hooked up and 25 Watts selected.

Using GX0OOO/P I called CQ on 145.500. Roy G4SSH helped by spotting me after contact via text but the tiny pileup was soon worked through. In the log: GW4ZPL/P John; G6WRW/M Carolyn; GM4WHA Geoff and G0TDM John. Carolyn was over by Haweswater and having an easier day after putting on St Sunday Crag & Fairfield the day before.

Thinking how much time I’d saved due to the lack of a pileup, Robinson sprang to mind. It soon sprang out again. LD21 would have added several hours to the undertaking and made for a more difficult journey back to Little Town. Not today thank you! It was far too sticky and in stark contrast to February 2006 when Will & I did the round of two with his Spaniel dog.

This well-defined path is rocky at first before zigzagging down grass. I could see no sign of the group, who had just gone as far as Dale Head Tarn, had lunch there and returned back down the valley. However I was told back at the B&B later on that they had spotted my red shirt from a distance and shouted but without result. I must have had the phones on or I’m going deaf!

The short drive back to Keswick was completed by 15:02. We had avoided the rain (which now started) but there were none of the forecast afternoon thundershowers on the walk itself.

THANKS TO ALL STATIONS WORKED and to Roy G4SSH for the spots.
73 John G4YSS / GX0OOO/P. 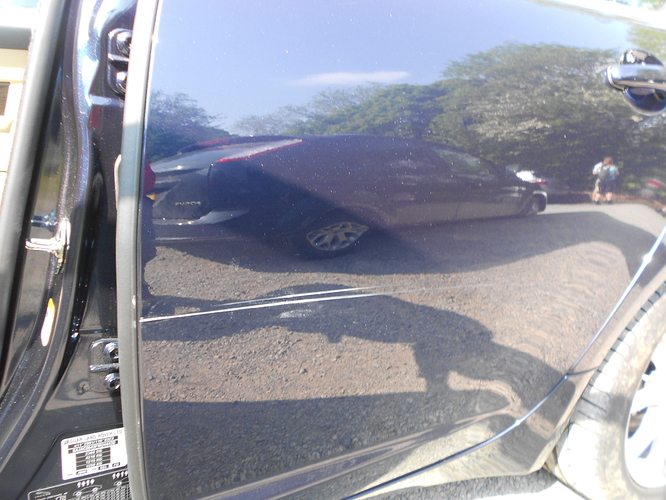 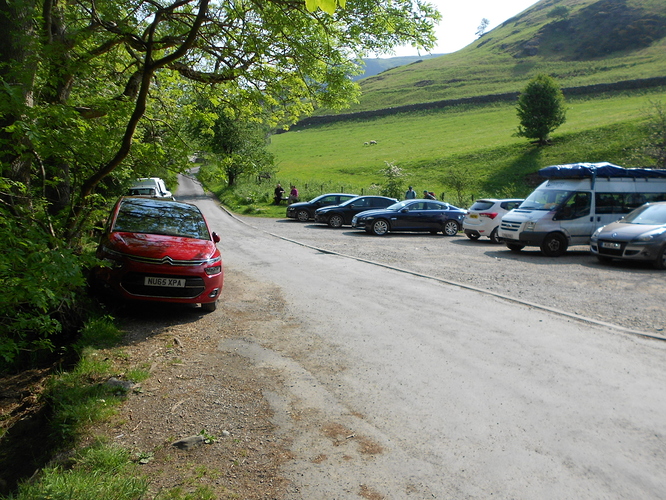 Above: Parking place at Little Town 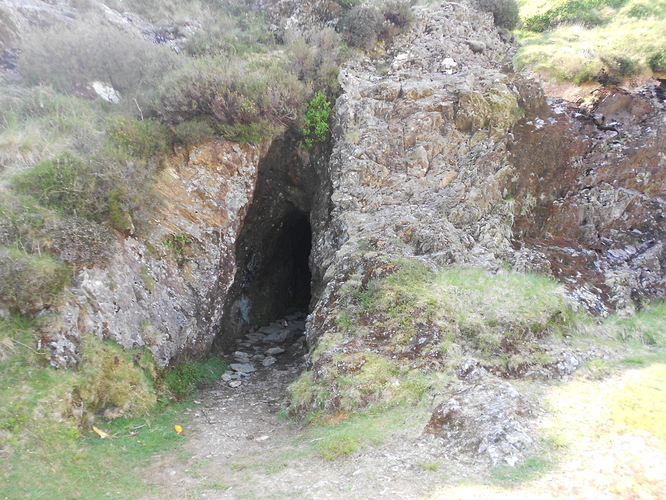 Above: The adit on the way up to Maiden Moor 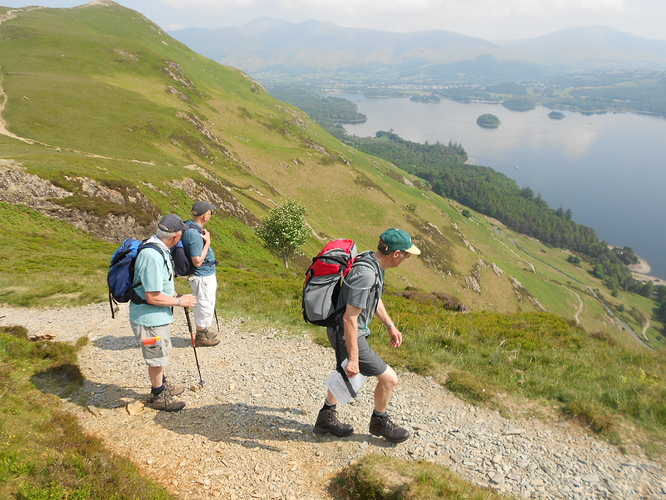 Above: Roger, Rob & David with Derwent Water behind 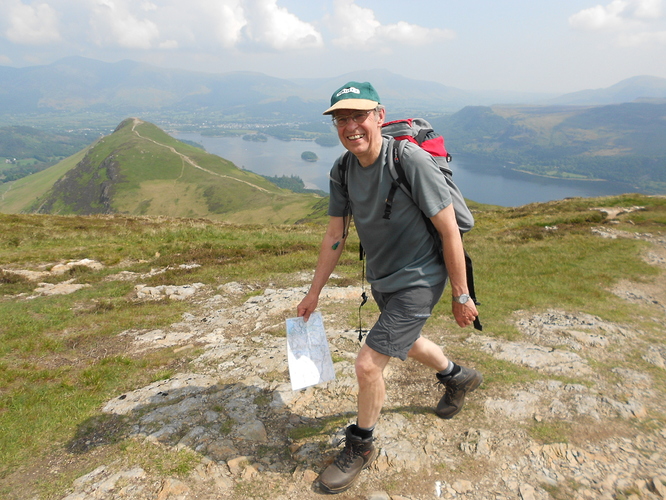 Above: David - Our Leader. 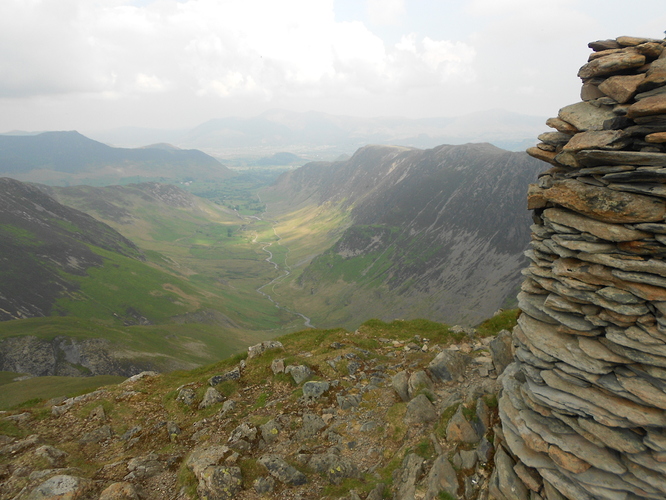 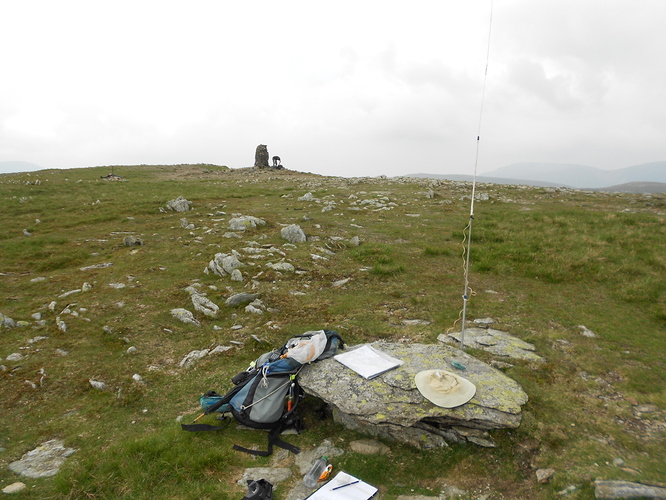 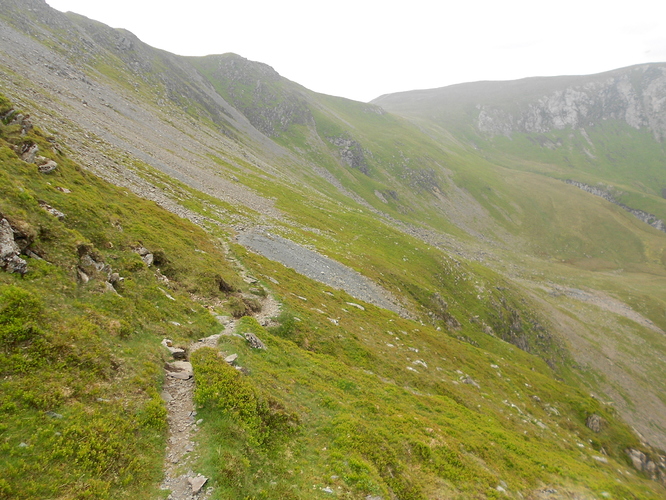 Above: The path down via Dale Head Crags which meets the valley track near Castle Nook 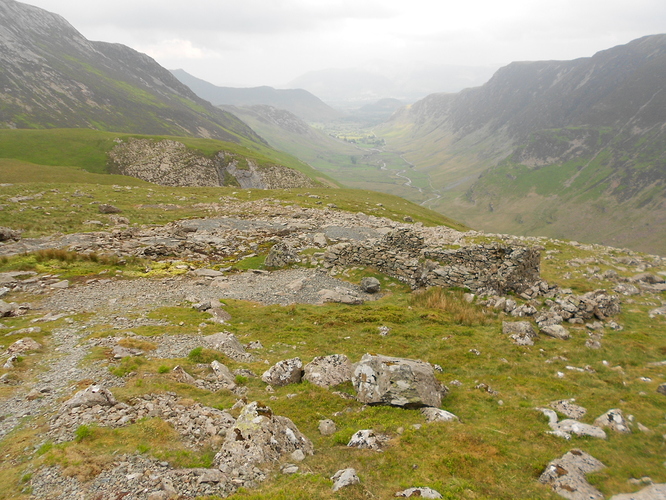 Above: Ruin on the path down via Dale Head Crags which meets the valley track near Castle Nook 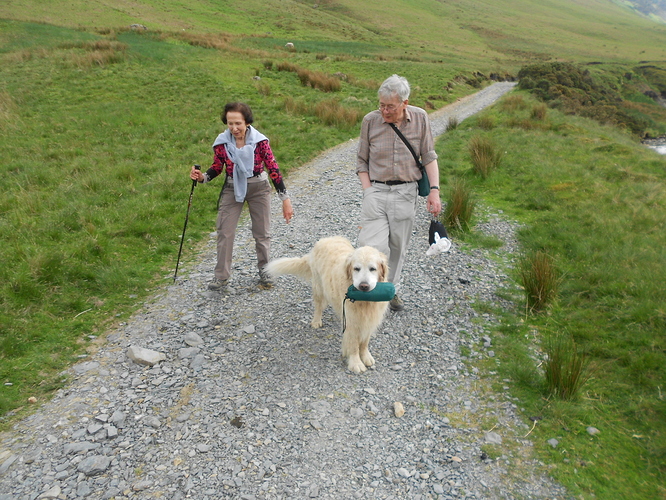 Above: Random couple with a dog called Harvey, carrying his master’s coat 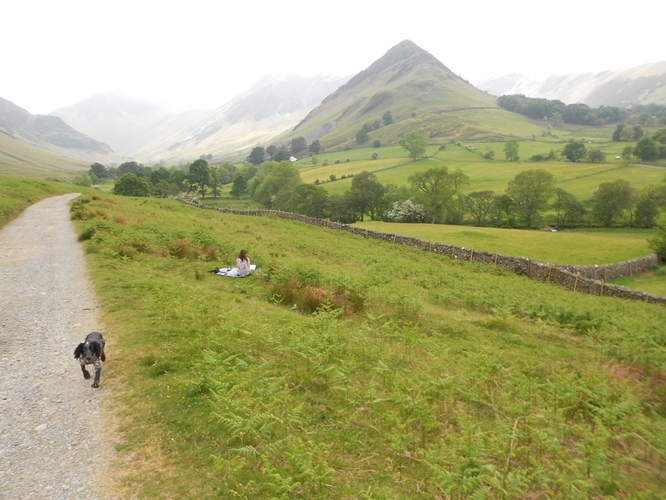 Above: A girl sketching the scene. Dale Head in left distance

A classic walk, John! The ruins under Dale Head Crags are part of the old copper mine, you can pick up nice colourful specimens of copper mineralisation from the spoil there and higher up where the path traverses a dark scree. You will have passed the climbing hut about a quarter mile after passing Castle Nook, I’ve stayed there several times - its surprisingly comfortable!

Glad you liked the photos. I did notice a house at the side of the track and marked it on the GPS at NY 22955 17701 (if that’s the right place.) It looked very well kept and had an equally good shed at the back.

The ruin was at NY 22220 15718 but I didn’t know it was a copper mine. If I’d known that I would have spent a few minutes on the slag heap. I like to find minerals & metal ore etc. In Teesdale there is lead ore.

There’s another copper mine at Castle Nook, in fact the whole area of the upper Newlands Valley is riddled with old workings, satellite to the more successful Brandley Mine under Catbells… More surprisingly, there is an old cobalt mine on the north side of Sail Pass - quite extensive but a total failure!