Introduction:
This was my second activation of this small hill with the long name. In early February 2006 I had used it to take a close peek at Ben Nevis, mainly to try to find out where the snow line was. Only the bottom half was visible with the rest in cloud but I quite liked what I could see of WS1 and so ended up carrying out an activation of it two days later.

In 2006 we stayed at the Caledonian Hotel just outside Fort William but this time we used the Lochs & Glens Highland Hotel which is nearer to the town centre. GM/WS-001 and WS-044 SOTA’s were already in the bag this year but I found myself with a spare time window because my XYL is disabled and needs to sleep in the afternoons. So as not to disturb her, I need to be ‘out of the way’ and this hill is less than 10 minutes drive form the hotel. Sometimes in this situation I will put on some mobile WAB squares, particularly if it is raining but WAB has all but stopped due to poor band conditions on 7.160.

WS-293, though a mere two pointer, is not a pushover when it comes to activating and I had to be sure that there was sufficient time to get up and back in the time available. Based on the 2006 times I assumed it could be done if the on-air time was kept short.

Sunny periods were in force and though there was a brisk cool wind, no rain was forecast. Since this is a sub-2000 footer, judging by the limited success on the two larger mountains I had done in the week, I threw all things VHF out of the rucksack. This decision was further reinforced by zero activity on the 2m-FM mobile rig while driving around locally.

The above route information was gleaned from the 2006 activation, mainly on the descent. Even off the track, the going is not too bad, if a little boggy in places but the final approach up the NW facing flank is both steep and as far as I can ascertain, pathless. Just where the path, which runs the final 200m to the summit, originates is unclear.

The summit is only 528 metres high but 423 metres of it have to be climbed. That fact and the cross-country work combine to make progress disappointingly slow. Today’s climb took 56 minutes but it’s very far from the hardest 2-pointer in Scotland.

The top of WS-293 is grassy with heather and there’s plenty of space for a full sized 80m dipole. Shelter from the SW wind is available at NN 1152 7085, not far from the cairn and overlooking Fort William.

There are great views of Ben Nevis’s westerly aspect from this hill and though the distance is some 5km or so, it looks closer. The zig-zag path which goes up the top half of the mountain is clearly visible to the naked eye.

I had now run out of time but though I had heard G4SSH calling me on 7 MHz CW earlier, I just could not get back to him. Maybe I could work him on 60m?

5.300 CW: - 1 QSO:
Because evening meals were fixed by the hotel at various times between 6:15pm and 7:30pm depending on the day, I really didn’t have time for another band but thinking G4SSH and one or two of the closer ops might just get me on 60m, I went to adjust the dipole to run on 5 MHz. This particular dipole does not have the 60m band, it having replaced the one which failed on Ben Nevis. I had to rig it asymmetrically with one 80m and one 40m link pulled. The VSWR wasn’t too far out however which made me wonder why I bothered to make a pair of 60m links for the original antenna.

I phoned Roy G4SSH to alert him with the proviso that time was short but I would try to work him first. If that turned out to be time consuming and/ or signals were very weak, I would not hang around to wait for a spot to take effect, then risk further time delays repeating reports.

I could hear Roy calling me with his best available output; about 50 Watts via an ATU into a Butternut which does not cover 5MHz but it was only producing at best 559 at my end. In the event it took me several tries until he QSL’d the 559 report and gave me 229. With that I deemed the band to be barely open but listened for a while longer. I think Roy spotted this briefly but apologies to anybody who missed it or could not hear the transmission. Power was 50 Watts.

With the rig still on 5.300 and AF gain set to full, I first ran to the edge of the hill to photograph the entire Ben Nevis route bottom to top (you can only see the top half from WS-293’s summit cairn) returning to take down the dipole in the brisk wind. I heard nothing further on 60m.

The Descent:
A simple retrace of the ascent route was completed in 38 minutes at 17:56. Diving into the car I sped off within a minute, arriving at the hotel in the nick of time to join the XYL for evening meal without loss of brownie points!

Observations:
So in summary, though only 24 stations were worked, I filled in a spare afternoon with two points earned and not too strenuous a walk. One thing that concerned me slightly was the grassy cross-country walking in case I should catch a tick. It didn’t happen thank goodness.

Thanks to all stations worked and to those who spotted me, namely Roy G4SSH and G0RQL. Thanks to G4SSH for telephone liaison, alerts & spots. 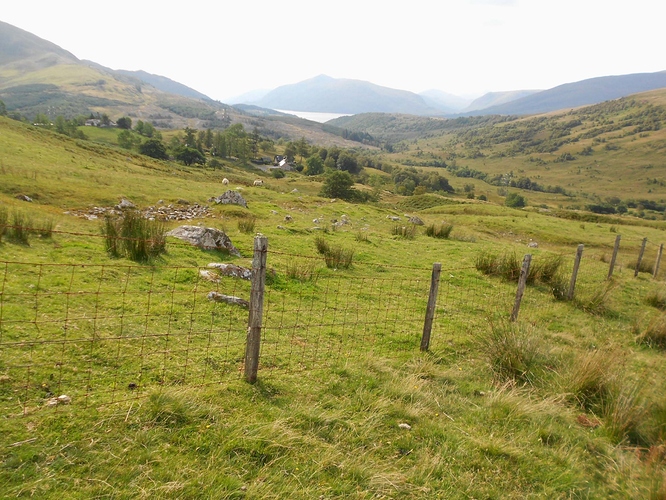 Above: View looking back to start point 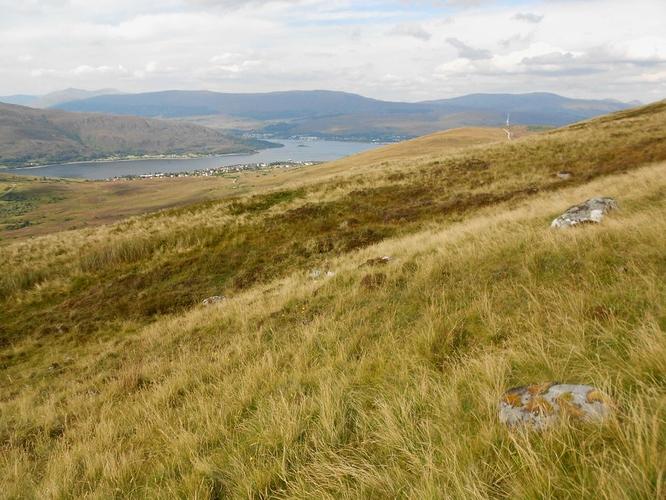 Above: Looking towards Fort William 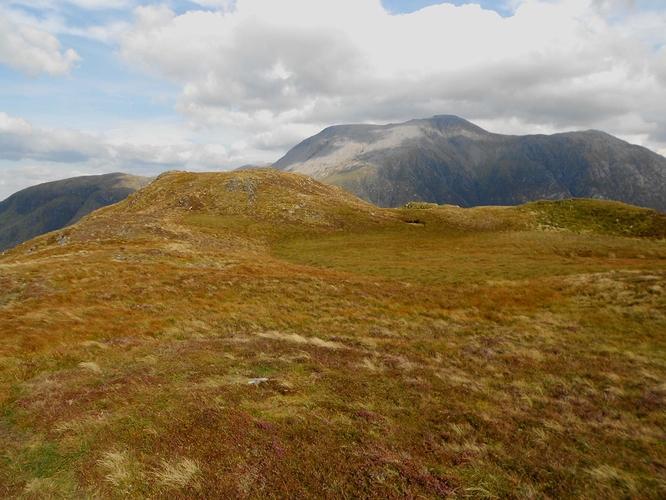 Above: Final approach to WS-293 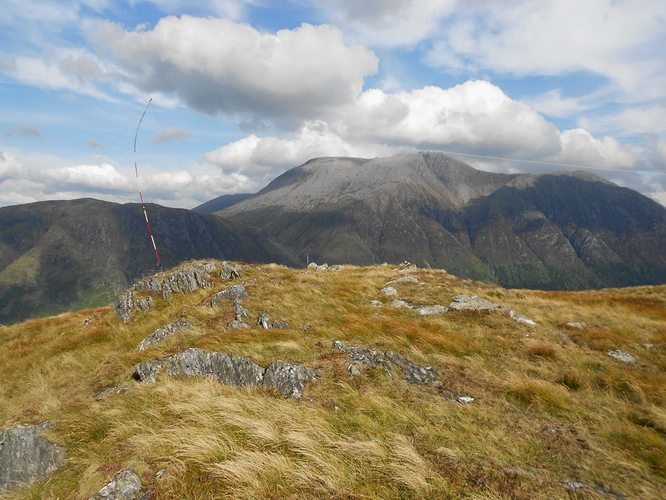 Above: Activation of WS-293 with Ben Nevis behind 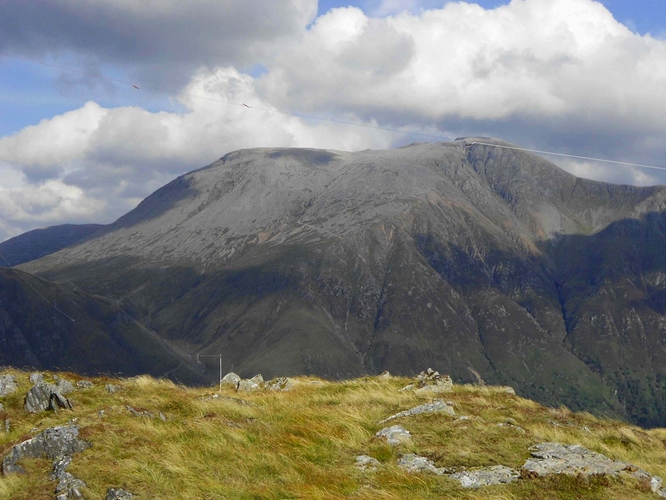 Above: Ben Nevis from WS-293 showing upper part of path with zig-zags 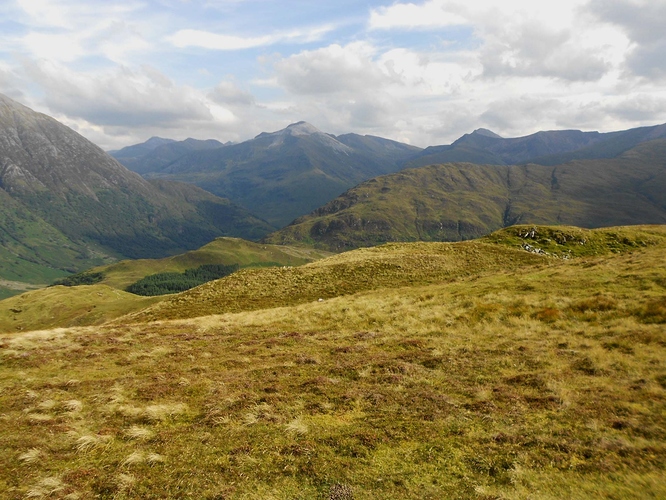 Above: View looking SW from WS-293 towards the Mamores

Just a small correction, John: it is Bidhean Bad na h-Iolaire, pronounced something like Bijan Bad na Hilary (apologies to all Gaels!) Never set foot on it myself, it looks like more of a penance than a pleasure though it looks good with snow on it!

How is your pole coloured red and white? just paint?