We had set ourselves a minimum of three SOTA targets for this trip: to climb the highest peak, to activate a summit I had chased and to activate a new summit. So far we had only hit one of our targets, both of us had got a unique first to activate. Nearly a week had passed and we had not explored the south of the island or its highest mountain, Pico de la Zarza (EA8/FU-001). At 812 metres it is the highest summit and also the longest walk, nearly taking you from one side of the island to the other.

On Friday 14th December we set out south to explore, driving part of the way down the long dirt track that leads to the lighthouse on the southwest corner of the island. We also had a look around Morro Jable, a large town full of tourist resorts. Just to the north of this is the starting point for the walk up Pico de la Zarza, a well-marked trail with signs and even a number and time for the ascent/descent. Looking from here (from the southeast), the summit appears to be the highest point along a long crest behind extensive ridges spreading like fingers and running down to the coast, one of these providing the route up to the crest. As we would find out, when you reach the top of the crest, the northwest side drops dramatically directly to Cofete beach way below.

An early morning start in the dark had us at the parking spot above the resort of Solana Matorral, near the area’s waterworks, just as the sun was rising. Even through the morning gloom we should have been able to see the summit of Pico de la Zarza as we approached but it had been hiding in cloud as we came into the resorts. As we prepared for the 10km walk ahead, the morning air was cool with a breeze that added to the apparent chill we were not quite used to. Food and a little extra water was added to the backpack’s usual contents and we were soon on our way. Our first views of the summit was quite disappointing with its cloud covering appearing much lower and thicker than at first light but this was the day we set aside to do this summit so we carried on regardless. 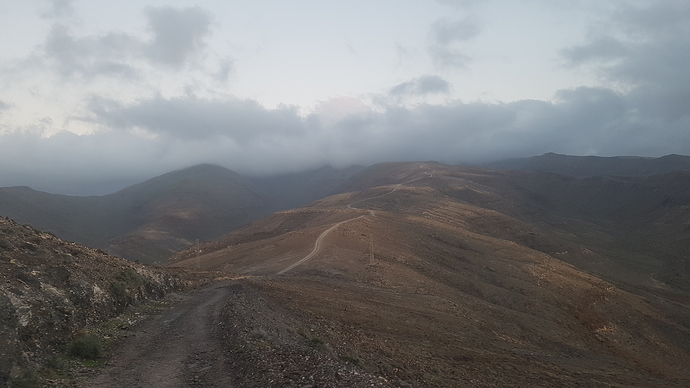 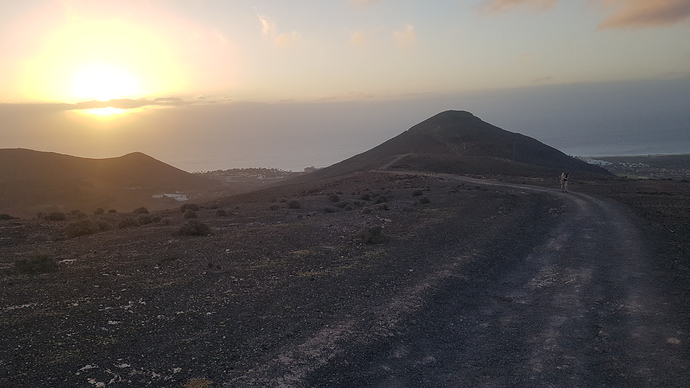 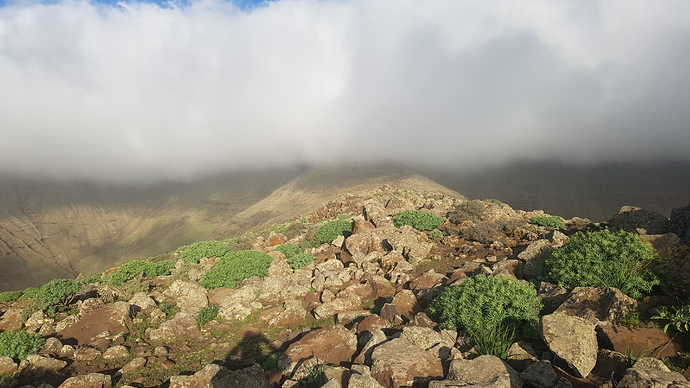 The walk underfoot was made easy by a wide 4x4 track which worked its way up and down along the undulations of the ridge. Beside the track we stopped to find one of the many geocaches placed regularly along the route. These were as good an excuse as any to stop, look around and take photos. The 4x4 track finished quite a way below the final assent at a tuning place. From here the trail becomes a normal path which winds its way steeply to an unexpected gate and fence. We have found out subsequently that the fence served two uses; in the past to restrict access to an abandoned transmitter site and now to protect the areas unique plant-life from the ravages of goats. We reached the summit in just over two hours walking. 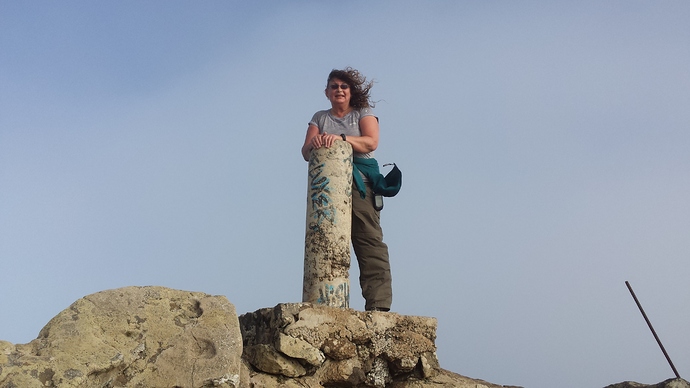 At this point there were no people around (we had started early enough to be the first that day) so we enjoyed the misty views from the triangulation point while deciding where to set up the antenna away from the wind that had got stronger the higher we got. Even with the wind, the clouds stubbornly stuck to the summit until we left.

This activation, by necessity, had to be QRP after the battery failure on the activation before, so expectation of lots of contacts was low. In reality we only needed four each to qualify so when we started on 20 metres Helen piggybacked on my first five contacts. Included in these were two local island call-signs. Qualification out the way in 7 minutes, I settled into a relatively leisurely activation with me finding I had to call CQ quite frequently before replies. I finally ended up with 24 contacts on 20 metres and 10 on 17 metres, including 2 summit to summits on each band, in an hour and a quarter, really quite a successful activation. Being a wanted DX SOTA station appeared to add at least an extra 6 dB to my signal! 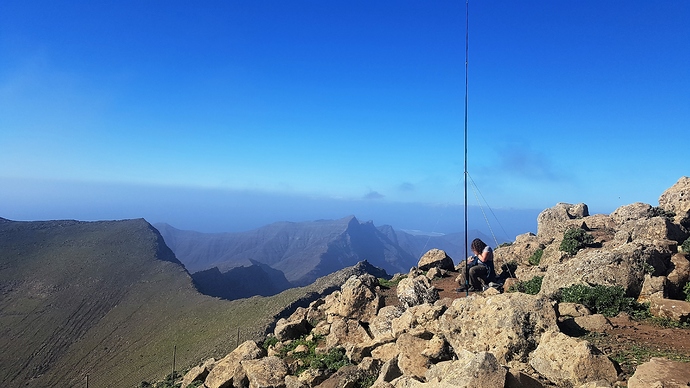 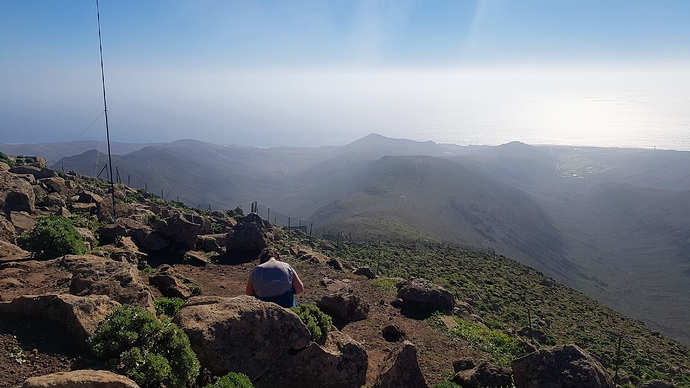 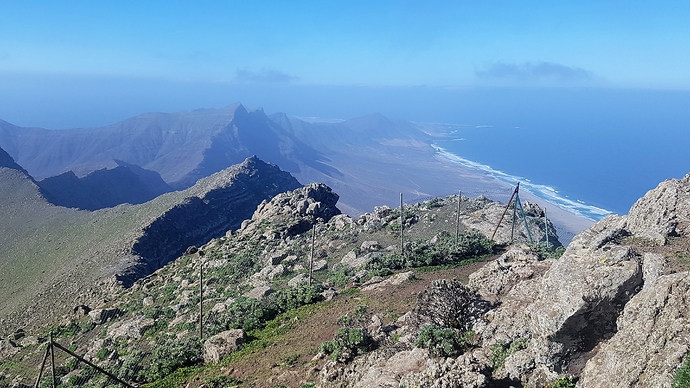 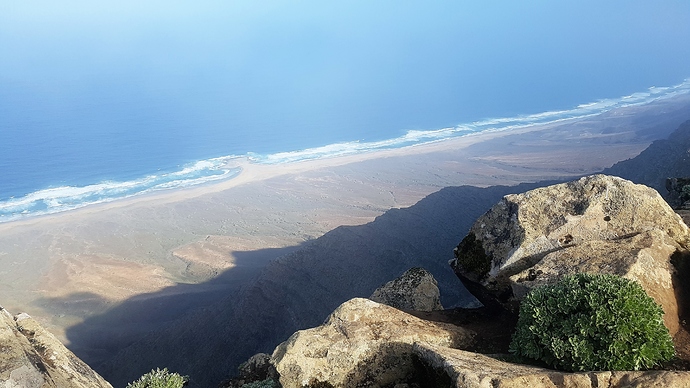 While we were on the summit many people had arrived and were wandering around enjoying the views before leaving. The cloud was clearing allowing us to see along the ridge and down to the beach without obscuration. It was 11:30 so we packed up to set off before the sun reached its zenith (which would be nearer 1pm than noon). We passed lots of people still coming up as we descended; we were pleased we had the easier walk off as the day got hotter. 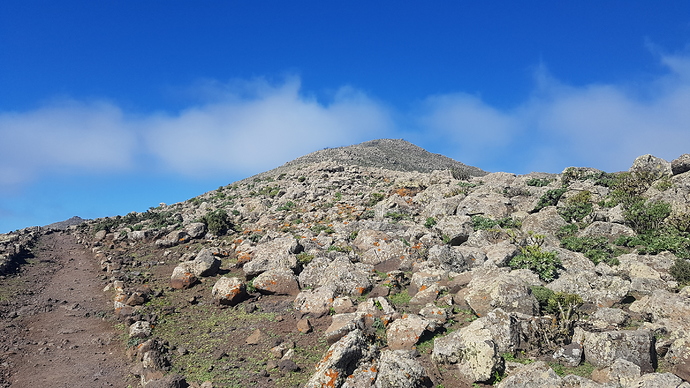 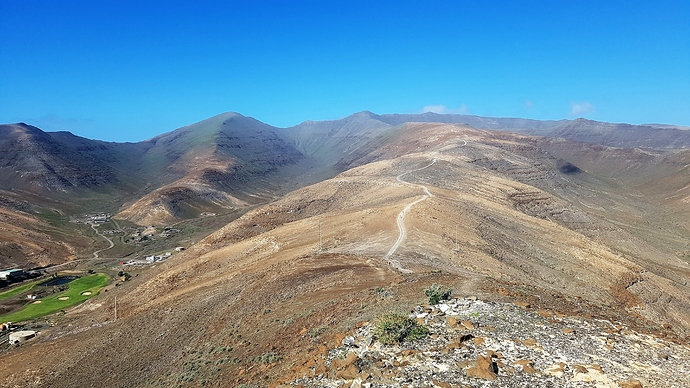 Time to head back to our resort on the new FV-02 road but we had plenty of time for a few caches which led us to the old eastern coast road. Along here what appeared to be a pillbox caught our eye just sticking out of the barren terrain. There was a mirador further on (Mirador de Sotavento) so we parked and took a walk. It turned out we were right, a left over from the Spanish civil war or WWII that overlooked the bay. We visited the mirador to find it was a very nice restaurant so we stayed and enjoyed some food and the views of the sea, the bay and the mountains on which we had just walked.

Two out of three of our objectives achieved. To activate a summit I had chased would mean a bigger climb than the previous smaller summits and one less well marked than the last. We had a choice of two, Fraille (EA8/FU-004) a hill on the southeastern tip of the island, or Aceitunal (EA8/FU-003) one we had driven by previously on our trips near the centre of the island. In any case we decided to take a few days away from SOTA to geocache and visit museums so we had time to research and choose.