We had a break from SOTA to visit the various tourist attractions on the island. Although neither of us are particular fans of zoos we decided we would visit Oasis Park. The park itself had started as gardens and then developed over time to include animals. At least the animals, mainly African, were nearer to their natural habitat and had plenty of space so we enjoyed our time there. 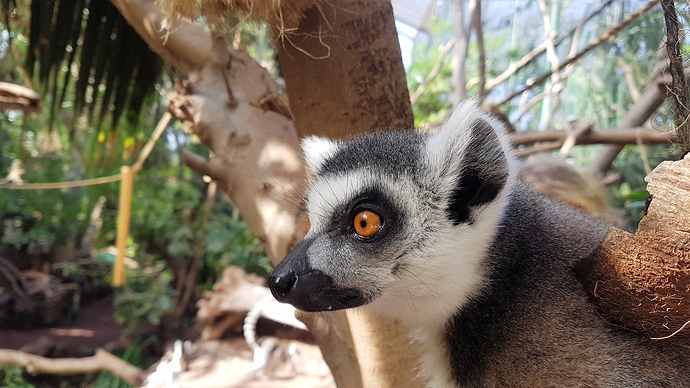 Another museum was visited on the Monday, the museum of salt. Salt was an important commodity throughout the last four centuries on the islands and Fuerteventura has the last remaining and still worked salt evaporation pans. We found some more geocaches to finish the day after attending a geocaching event but we started to plan our next SOTA activation. 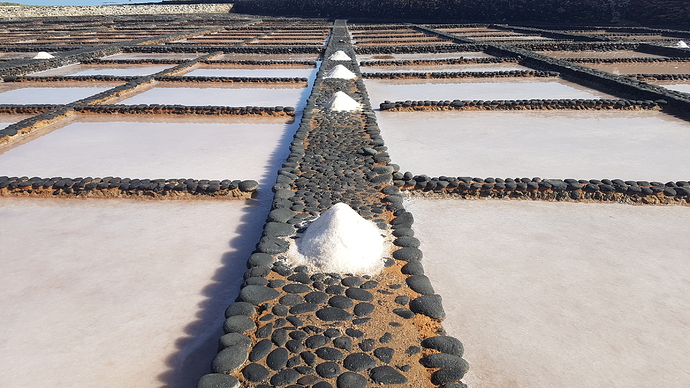 Another early start on Tuesday 18th December saw us drive west from our resort through the village of Tetir and up a dirt track to park as close as we could to our target, Aceitunal (EA8/FU-003). Our final aim for the trip was to activate a SOTA I had chased previously. There was only a choice of two and the other, Fraille (EA8/FU-004) was at the southern end of the island requiring a long walk up a valley to a col and then following south the crest on the west coast of the island that has Pico de la Zarza (EA8/FU-001) to the north. Neither looked easy, neither had geocaches to offer help with planning nor did they have trails on the maps, but we thought we had seen a way up Aceitunal. This proved to be partially correct. 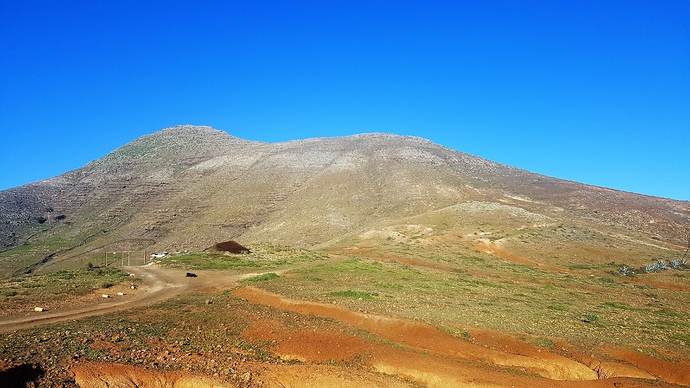 We parked to the east of the summit on the relatively barren side of the mountain (the other side has mostly unused agricultural terracing much of the way up) with a walk of about 1 km and an ascent of 250 metres, so nothing too difficult. We started well, climbing up the now expected loose grit covered slopes using the rocky outcrops to make good progress. These rocks became more frequent until we reached the main ridge which was all rocks with many scrambles required. The wind had been absent lower down but from here it was strong and our constant nagging companion. At this point we encountered a fence that kept the goats on one side of the mountain. The fence ran the whole length of the ridge so we followed it the best we could until we reached the summit, probably not the best route. 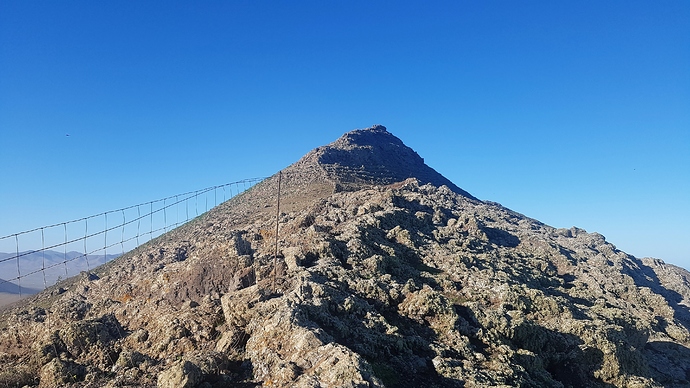 After enjoying the views we set about the activation hoping that working QRP would provide as many contacts as on our last summit, Pico de la Zarza (EA8/FU-001). I started on 17 metres and managed a quick 7 contacts although conditions were not great with the band sounding quiet. Helen took over on 20 metres making 12 contacts with a summit to summit with 9A/S56LXN/P. I took over but the band quietened with only another 5 contacts in the log. 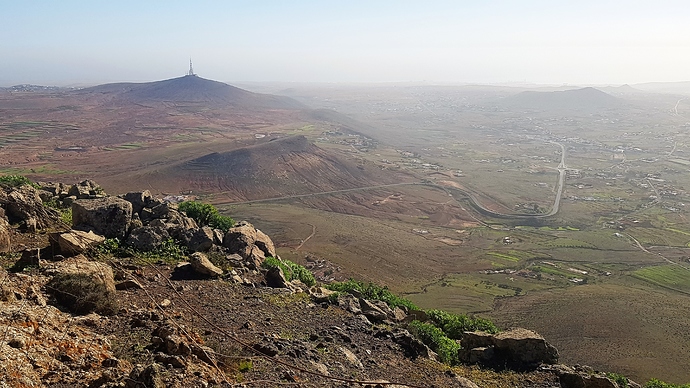 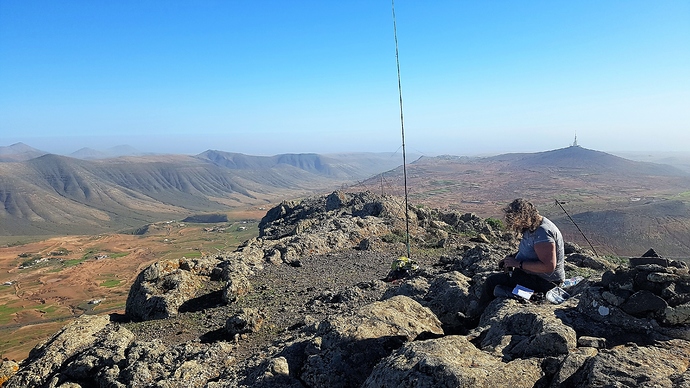 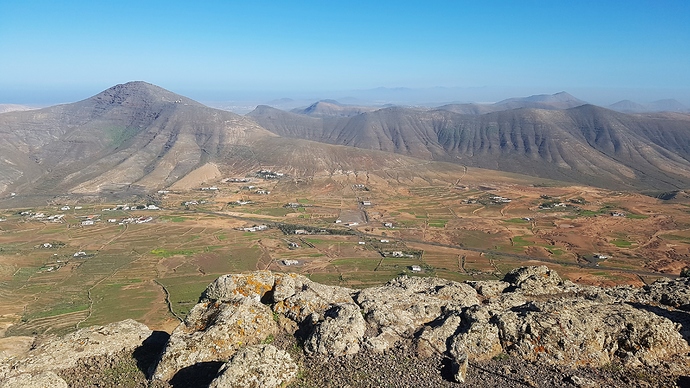 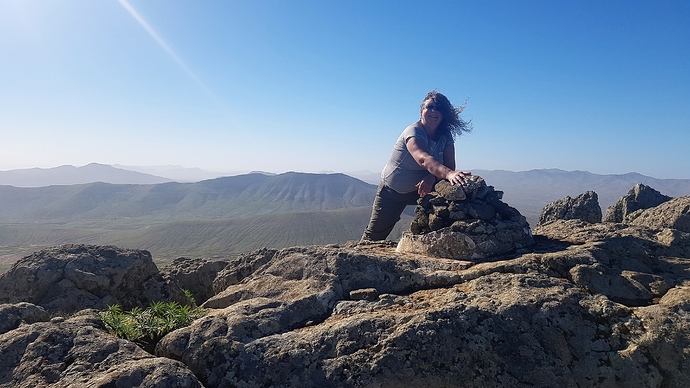 Coming down we chose to walk further along the ridge to a col and walk down a bit towards the terracing which made the descent easier than the way we had come up. We followed goat tracks (although we saw no goats on this side) running parallel to the ridge until we came to a point we recognised. We could see the car so we knew where to go. 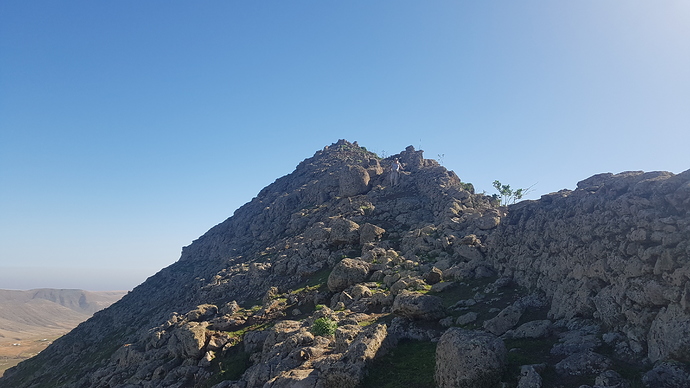 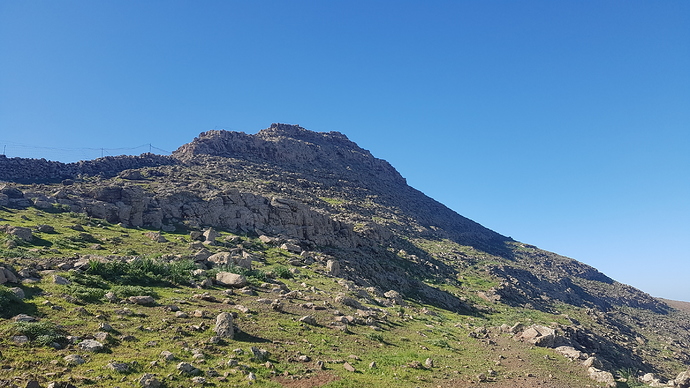 Our holiday was nearly at an end but we still had the rest of the day to visit some more museums, the cultural museum of preserved buildings nearby in Tefia, the Los Molinos reservoir with more water than we had seen anywhere else on the island (but now too brackish to use for agriculture) and the cheese museum which actually had more than just cheese, describing the formation of the islands, their habitation, the goats that people brought and the meat, milk and cheese that these provided for the people.

On Wednesday 19th December we headed home to a cold and wet East Midlands airport. It had been a good holiday with 5 SOTA activations and all our targets achieved even though we did not plan as much as we would normally have done. Hopefully it will not be another three years before we visit these islands again.

Thank you Paul, its always good to get a little feedback. The reports are a little bit like a post expedition diary, something I can always return to.

Hi Carolyn, thanks for the nice reports and photos which remind me of my visit to the island in November 2017.
I managed to get 11 successful activations, the ones you did were on my list but I decided to get a few completes instead, so I guess I will just have to go back

Hello Carolyn,
thank’s for the reports from your holiday and the nice pics. I think you both have enjoyed your trip to Fuerteventura very much. Looking to your picture I remember very well my trip to the island and activating some of the summits in 2011. Good luck and 73 Lutz

Many thanks for an excellent set of reports Carolyn which are very much appreciated, particularly as the chance of me visiting the islands is virtually zero. The terrain does not interest the other half who would rather go somewhere more picturesque and a trip without her would not be acceptable… knowing this just ramps up the jealousy factor!

Well done on including visiting places of interest and geocaching into the mix… and thanks for including the interesting snippets in your reports.