It was Wednesday 12th December and we had planned to climb the unactivated summit of Morro Tabaiba (EA8/FU-018) having scouted the start point the day before. Unfortunately I was not feeling very well so Helen went off to explore the town (Caleta de Fuste) and the surrounding resorts/homes running away from the sea that led up to a well know local landmark, “Chipmunk Mountain”, or to give it its proper name Montana Blanca.

It was christened Chipmunk Mountain because of the large number of Barbery squirrels that lived on the summit but the area now is bereft of life. The road winds up the side from the town with other roads crossing each side first with a resort and then houses until the very top level with uncompleted concrete shells of apartments left when the money ran out. Poking above this is a water plant and antennas. It was a hard slog up but provided a good view over the town, airport, golf course and the unactivated SOTA to the west, Murros Altos (EA8/FU-030). The views continued to the north and south of the island with the site of our first activation, Montana del Econfraga (EA8/FU-016), easily discernible because of its distinctive silhouette. 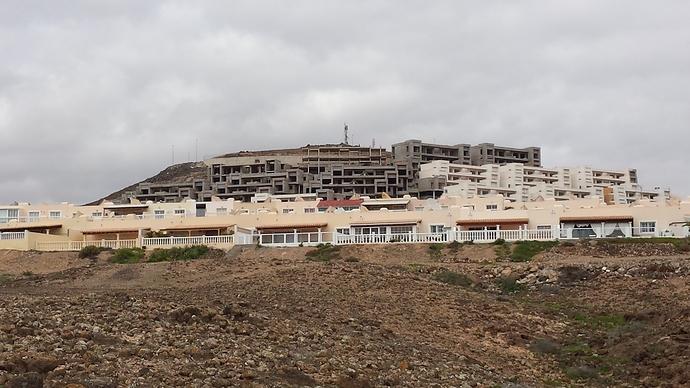 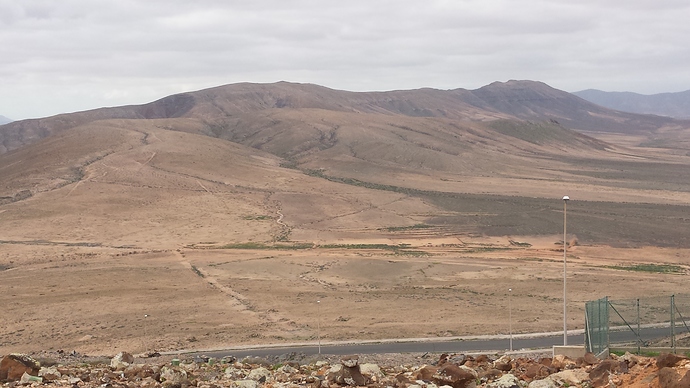 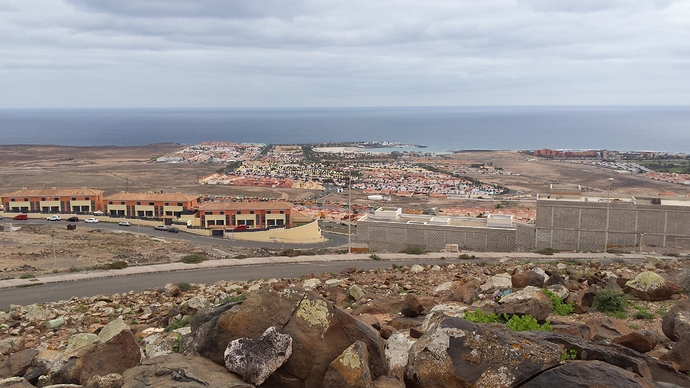 I felt better in the evening so we planned an early start for the Thursday, leaving before sunrise to arrive at the start point for Morro Tabaiba (EA8/FU-018) just as it was light enough to see. The parking was on a small road running from the village of Vallebron up to a mirador (Fuente de Tababaire) on the northwest side of the hill. We left the car on a junction to the west of the summit that led to a transmitter site on a smaller hill. 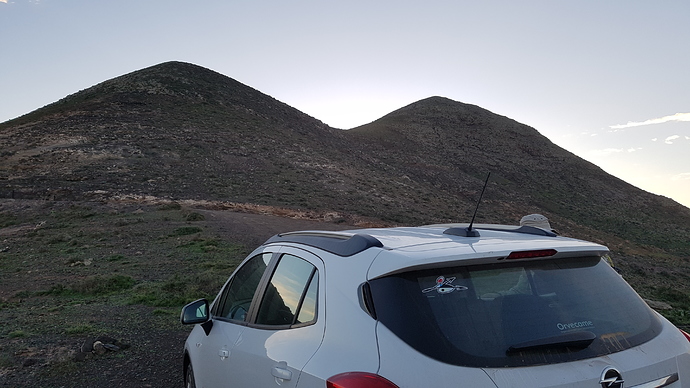 We had looked online for possible trails and had found a map for runners that showed a circular route from La Oliva up and along the ridge and back; if someone can run it, we could walk it and it did not look that difficult when we visited before.

There was a smaller hill on the side that we started to climb before turning to head to the col up to the main summit. The terrain was steep and loose like every other summit on the island but we made good progress and it only took half an hour to reach the summit. It was surprising this one had been overlooked before as it was the easiest of all the summits we did. 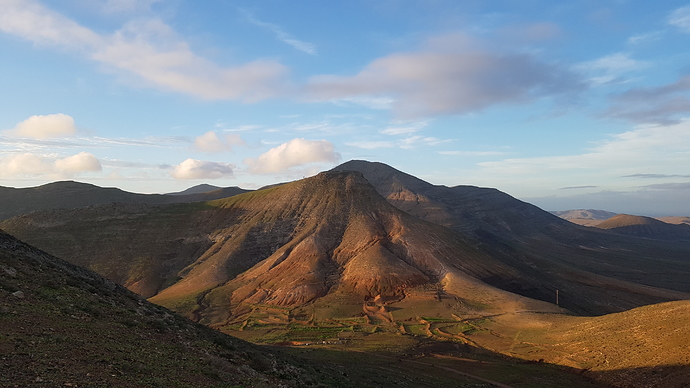 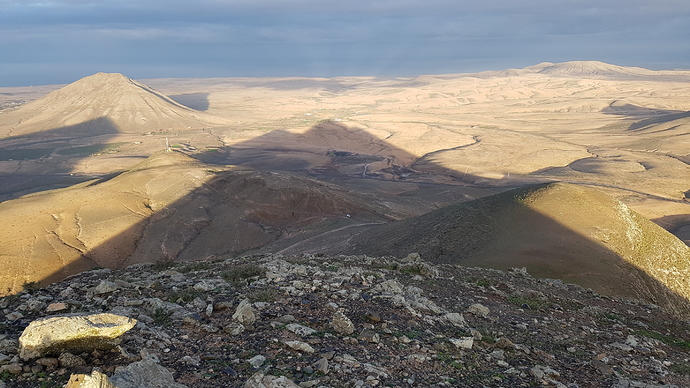 We set up on the edge of rocky shelter just below the summit cairn because while it was warm it was also quite windy on the exposed hilltop. As I had already had a first to activate, we decided it was now Helen’s turn to start. We started with a summit to summit with EA3HP/P on EA3/BC-008 on 20 metres. After we both chased him, Helen continued on for nearly an hour getting a further 53 contacts. 20 metres was holding up well in the early morning with lots of contacts into Europe and back home. The antenna was reconfigured for 17 metres (my favourite band) and I set about making contacts managing 49 contacts in 40 minutes. There could have been more but suddenly the radio gave a high SWR warning, terminating the activation. 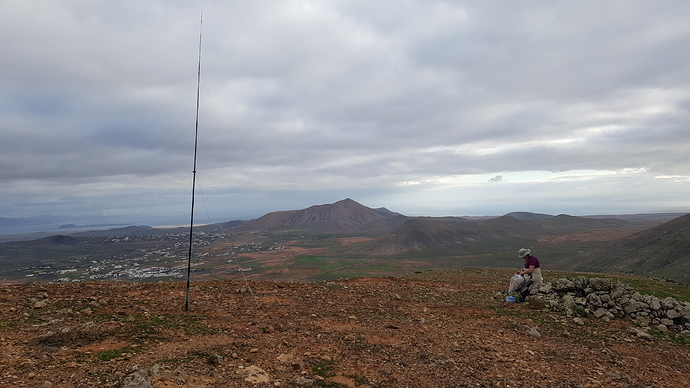 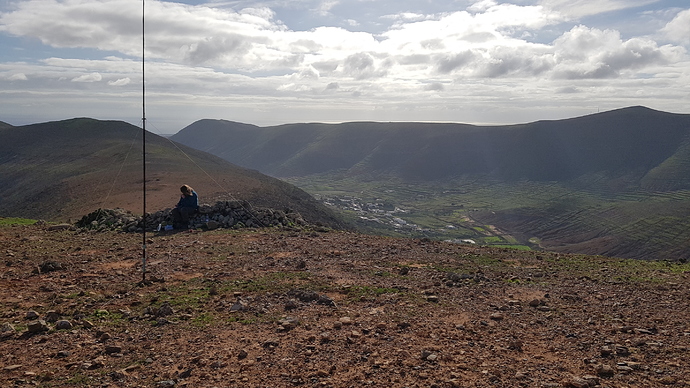 The system we were using has been reliable for the last ten years or so, a FT-817 driving a self-built HF Packer amp outputting around 25 W. These are both powered independently by two Li-po batteries which I have had for about 5 years. We checked the voltages and realised that one cell of the battery powering the amplifier had totally failed. At this point we were not sure if there was any damage to the amplifier (on our return it was fine) and we decided to pack up so as not to stress the other battery. We already knew we did not have a back-up arrangement using one battery to power both the amp and transceiver (I would be reluctant to do this anyway) and we needed the remaining battery to power the radio if we wanted to attempt any more activations.

As usual it took just as long to get down the loose slopes as it took to climb up but we made it without any slips. It was still early so we explored the northern end of the island. This started with a visit to the fishing village of El Cotillo where we decided to have lunch, a lovely large plate of fresh grilled fish to share. We then headed to lighthouse at Tostan (unfortunately the fishing museum was closed but we had a walk along the beach) before driving to the northeast of the island and the busy port of Corralejo (too busy for us) and the nearby sand dunes. 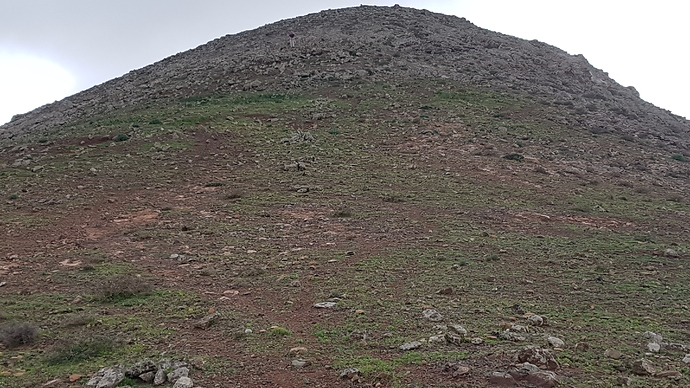 Our attention now turned to the south of the island and the highest mountain, Pico de la Zarza (EA8/FU-001). Now we only had one good battery it would have to be QRP, just running the FT817. We wanted to climb the route anyway so if we did not qualify the summit we would not be too disappointed, but how many contacts would we manage on bands that were not at their best?