Following His Lordship's tracks in the sunshine...

There was a distinctly odd feeling when I woke up early in the morning. It took a while to realise what it was - it was warm and sunny, a real rarity here this year so far! It was a day not to be missed. With my XYL and YK9L away on family babysitting duties, it was a no-brainer to head for the hills for a solo activation.

I’m fortunate with many SOTA summits within a short drive of my home QTH but today’s choice was the 518metre, two-point, Lord Arthur’s Hill (GM/ES-062) in the Correen Hills, a mere six miles (as the proverbial crow flies) from home. I’m a regular visitor but this would be a first SOTA activation there for me, just my fourth so far. 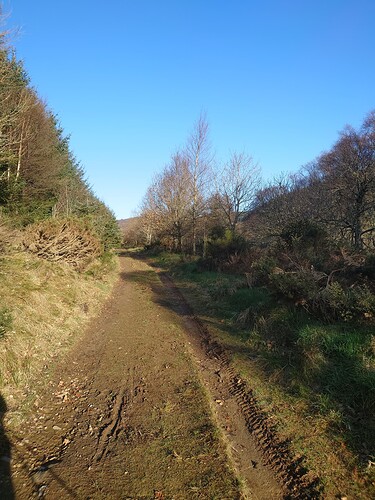 My route started at a parking place at Dubston Farm, near Tullynessle, close to historic pink-coloured Terpersie Castle - built in 1561, burned down in 1645, rebuilt in 1665 and now a private home. It’s a straightforward track of just a couple of miles to the top, initially flat through woodland then, after fording a wee burn, it heads up the splendidly named Fouchie Shank, with the summit ahead in the distance. 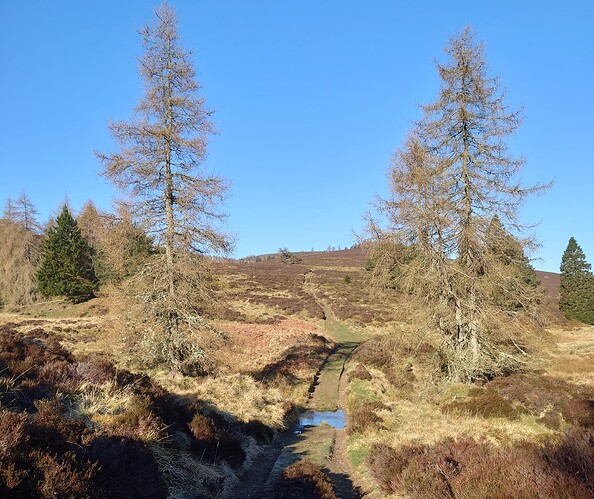 If you fancy a longer walk, a track heads right just after the burn for an anti-clockwise circuit of the Correen Hills which takes in the former Correen Quarry then heads round the (non-SOTA) summits at Mire of Midgates, Badingair, Brux and Edinbanchory before heading up Lord Arthur’s Hill from the west. It’s a lovely wander with excellent 360-degree views. Today’s objective, though, was the SOTA activation so it was straight on and upwards.

Skylarks were rising in song, sheep were tending to new-born lambs and there was definite warmth in the spring sunshine after the hard early-morning frost melted. Without a significant breeze, this was my first “one jacket” walk this year. The clothing mantra for any hill or mountain walk is layers - various layers can be discarded or re-worn as necessary when conditions change. I was happy to shed my outer layer.

Just before the summit, the track passes grouse-shooting butts, empty now, thankfully, but which will reverberate with shotgun blasts on the so-called Glorious 12th in August. Glorious for shooters, perhaps, if you’re into that sort of thing, but not for the grouse!

With the sun now shining brightly in a cloudless sky, I was happy to be wearing my newly-purchased SOTA sunhat (thanks Barry). It’s many years since I had to pay for a haircut - a wipe with an oily cloth is all that’s required nowadays - so some head protection is essential on sunny hill days for us folically-challenged folk. 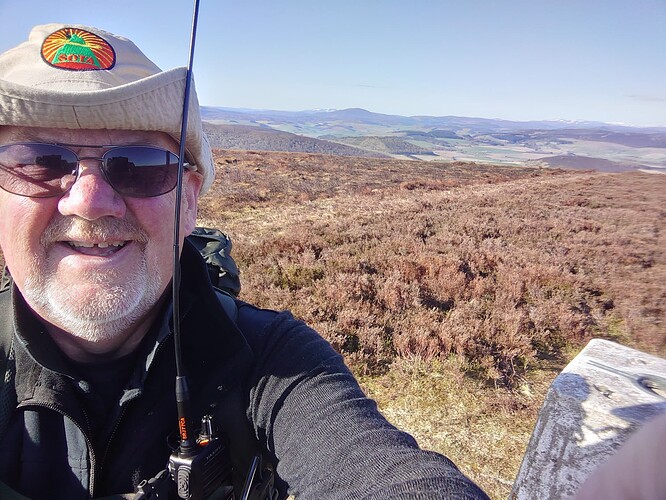 Just 70 minutes after leaving the car, I was at the summit (Mountain Goats will likely do it more quickly; I’m a Mountain Plodder).

With band conditions relatively poor this week, I didn’t have high expectations but erected the 6m SOTABEAMS Tactical Mini pole on the heather-covered plateau with my W3EDP antenna feeding into the KX2 and had a listen. The bands were eerily quiet. I put out a spot on 14.295 and was relieved when some invaluable regular chasers responded. They included CT1DIZ, EA5K, F5JKK, F4WBN, EA1AAP and S57ILF. Thanks all. Despite the poor overall conditions, signal reports were generally encouraging but there was deep QSB which rendered at least one faint S2S call becoming instantly unreadable, sadly. I had to be content with what I had. Activation complete.

Further CQ calls generated no response on 20m and it was the same on 40m. A scan around 145FM on my FT-4Xe handie with Diamond SRJ77CA whip was silent, too, (nothing new in these parts) so I brought things to a halt early at 09.00Z.

Time to ponder the view and reflect on some history while guzzling coffee and a sandwich. Just who was the eponymous Lord Arthur anyway? Well, he was Lord Arthur Forbes, a supporter of Mary Queen of Scots who died in a battle with his Protestant Gordon foes at nearby Clatt in October, 1571. When his coffin was being carried over the hill for burial at a churchyard on the other side, the coffin-bearers were hit by a surprise blizzard - nothing unusual in the Scottish hills at any time. They took shelter in a “summer house” near the summit and subsequently gave the hill the deceased’s name. There’s still a wee stone shelter there on the spot today.

Time to take in the view. To the south-west, viewed from beside the stone shelter, lay Morven (GM/ES-018) with snow-topped Lochnagar (GM/ES-008) beyond: 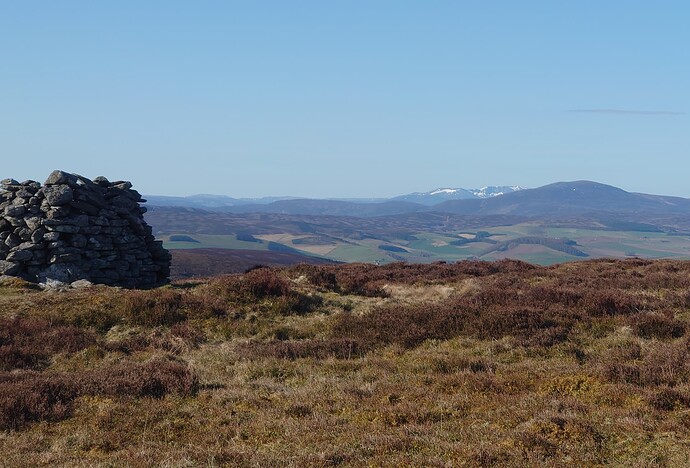 To the west lay snow-topped Ben A’an (GM/ES-006) and the Cairngorms: 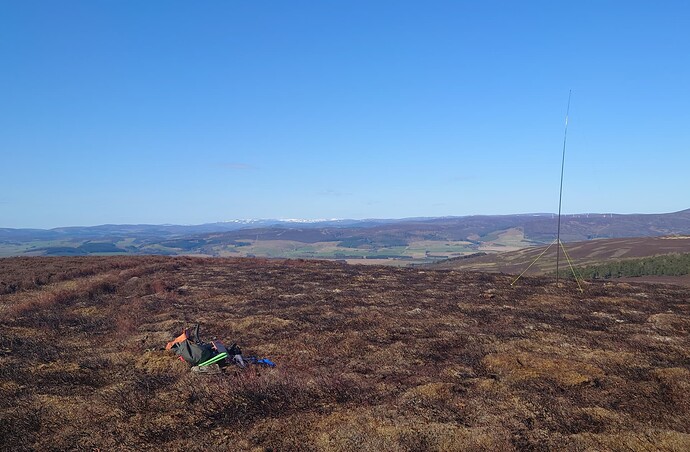 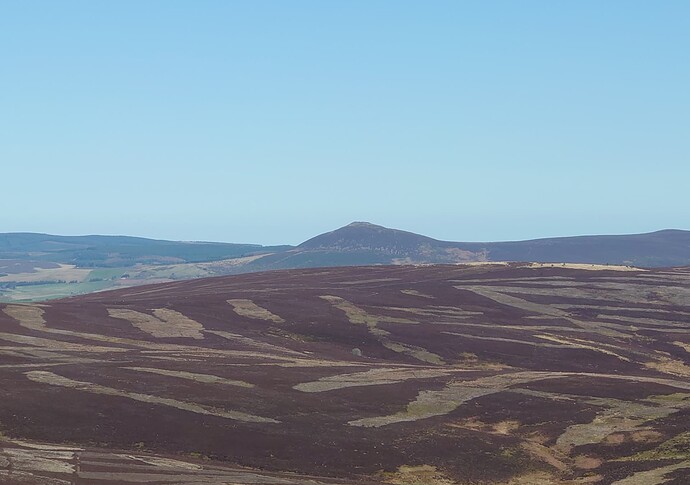 And to the east, looking down the Fouchie Shank path as I headed back to the car, lay Aberdeenshire’s most visited hill by the public, the multi-topped Bennachie (GM/ES-061). 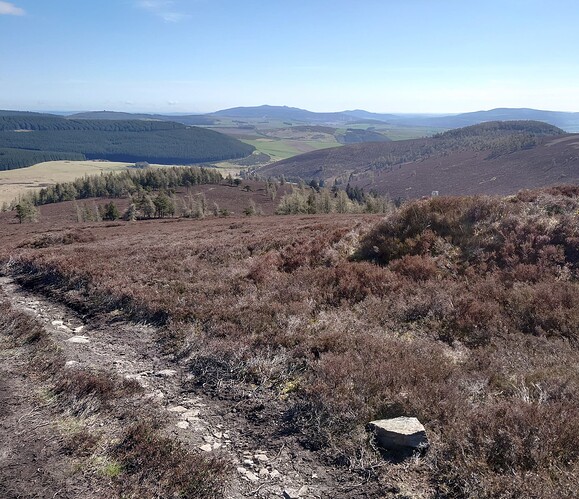 On reflection, I was probably too early on the hill for the band conditions but it was well worth being up there on such a beautiful day. I was just glad to be carrying a rucksack with QRP radio kit in the warm sun and not a coffin containing the mortal remains of His Lordship…! 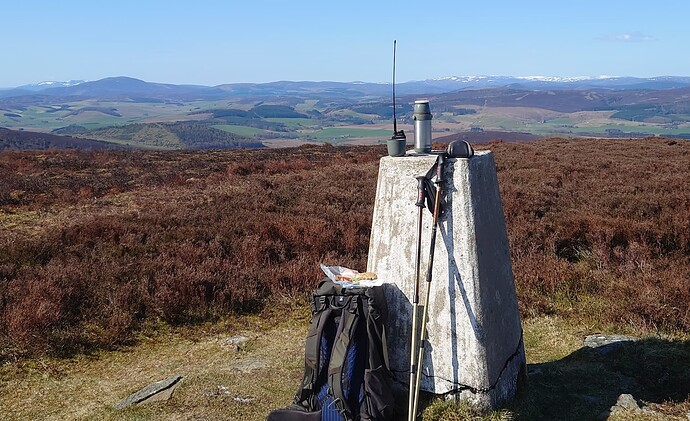 Beautiful landscape, especially the colors. Envy you being able to do an activation like that! 73 from Taiwan.

That’s one of my favourite local hills. The track is easy to follow and such a reasonable incline all of the way. The views are rewarding and it has a fine stone shelter to protect you from any wind.

Confession - the stone shelter is so fine that I don’t think I’ve ever bothered wandering over to the true highest point at the trig. point.

You’ll need to head up GM/ES-060 next. It’s equally pleasant and over looks Lord Arthur’s from the south side of the Strath.

These last couple of weeks I’ve not been out much. The weather has been rubbish. Wind, wind, wind… Mo had spinal surgery and my time has been spent helping her recovery, which mainly involves me stopping her from digging the garden, hoovering etc… Tuesday 15th February 2022 It was windy. I was on an “Early” at work. I was allowed out to play for the afternoon. I needed to find a hill with some trees that wasn’t too far from home. Coiliochbhar Hill GM/ES-060 fitted the bill nicely. 45 minute…

Anyway, great to see you ticking off some neglected GM/ES summits!

Thanks Fraser. I always enjoy Lord Arthur’s and the Correen circuit and really like Coiliochbhar, too, despite getting a bit lost in the wee wood near the summit in awkward snow a couple of years ago! Really looking forward to revisiting so many hills now with my SOTA hat on - literally!

Was marvelling to think that I could sit in the open without any shelter this morning while two weeks ago, on nearby hills, you were almost in survival winter conditions! What a climate; what fun! 73 Mike

Never a truer work spoken, Ken. Many thanks.

You had much better weather than I had - windy with showers. Had to put up my tent.

You had much better weather than I had -

Amazing how small distances can make big weather differences. I was lucky this time. I wonder how long that luck can last…!