These last couple of weeks I’ve not been out much.

Tuesday 15th February 2022
It was windy. I was on an “Early” at work. I was allowed out to play for the afternoon. I needed to find a hill with some trees that wasn’t too far from home. 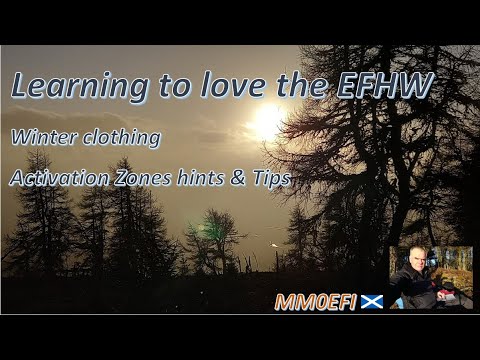 A 2022 goal of mine is to re-activate some of last years summits in a different way. Could be a different route, or different equipment, mode etc. I’d climbed this one last April and had a 10 minute activation on 40m using the FT-857+tuner+W3EDP. This time out, I’d be on a different part of the hill, different radio, different aerial and different bands. 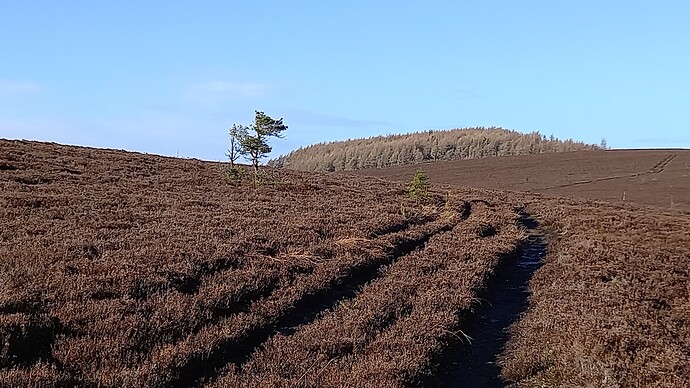 I hoped that the copse of trees near the top would be inside the AZ. I used my mapping along with the AZ estimator on sotl.as to check at home, however I wouldn’t really know until I got there. Turns out I was in by a couple of metres, which was great, as I was sheltered from the icy and strong NW wind, bathed in afternoon sunshine. (Ok, it’s February and it was 1 degree C, however it felt nice!

Before setting up station, I dumped all of my kit and went for a walk through the trees to the actual summit. 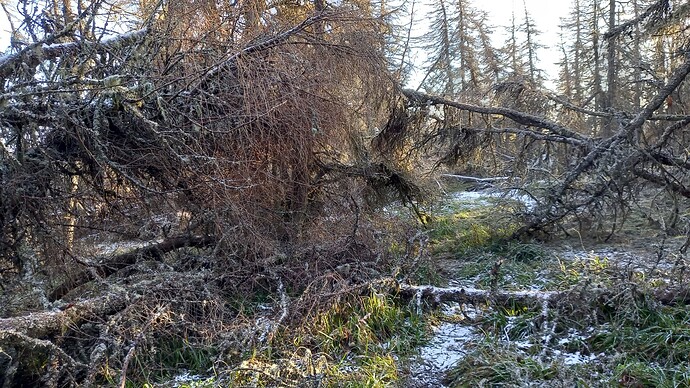 Returning to my operating point at around 1500z, I attached the 2m handie to my beam, just as Simon @GM4JXP was calling me for our pre-arranged QSO. I then put the 2m apparatus down, intending to use it later and went about setting up for HF. I never did go back to it. 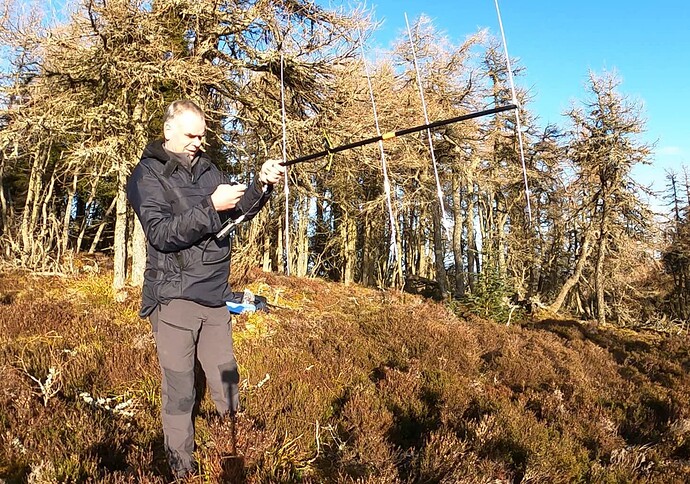 Today I was using my under-utilised EFHW which covers 40/20/15/10m with 67’ of wire, a 49:1 transformer and 5m of RG-58 feeder. I like to complain about this, as it takes longer to set up than my alternatives, and it’s well known that I do like a quick activation! (Especially in winter on the higher mountains.)

20m SSB and a rabble of a pile up initially. Once everyone started to behave, I made some nice QSO’s. There was some fading though, but not too bad. Simon had mentioned that Stephan @HB9HCS was on Lanzarote, so I went on the hunt. I could hear Stephan but couldn’t break through the pileup. It sounded like he was troubled by QSB, as there were long periods of silence from his end.

I popped the KX2 onto 15m and instantly heard an Italian talking to an American. Not always evidence of the band being open to all, however I put a spot on and swiftly worked IK8YDP and EA7GV. That was it.

It was a pleasant afternoon, so (unusually for me) I took a look at SOTAWatch3 to see who else was around, only to find this cheeky message: 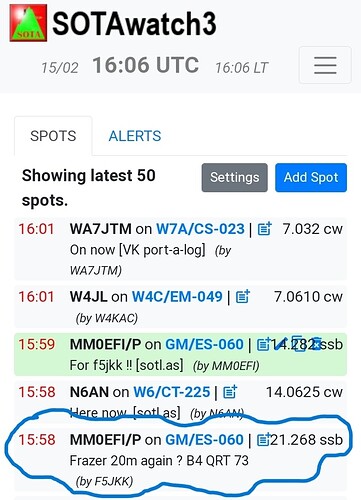 So, I stuck another spot on, worked Eric and then endured another mini-pile up, which turned out just to be a further three stations - Switzerland, Ukraine & Germany. 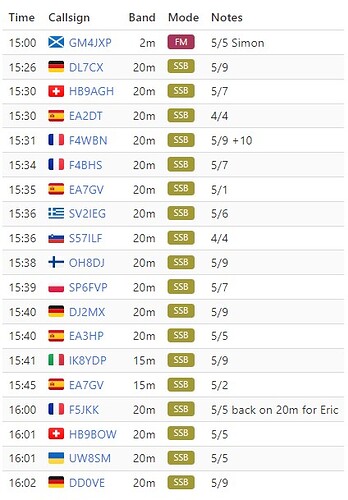 It was time to go. No sooner had I packed up, a brief snow flurry blew across, leaving some nice skies in its wake. 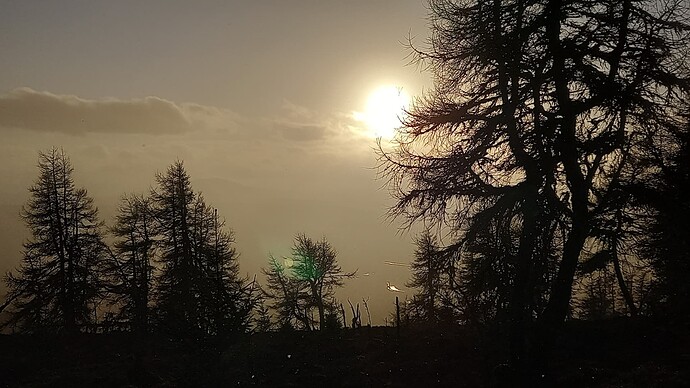 It was only when I stepped out onto the open slopes that I was reminded how bad the wind actually was, so I didn’t waste much time taking pictures on the way back, although it was a sunny afternoon. 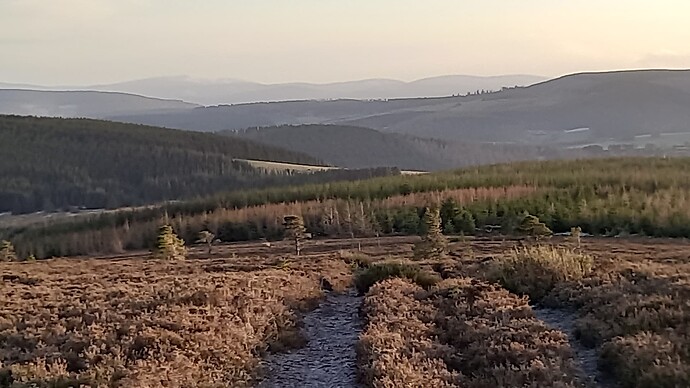 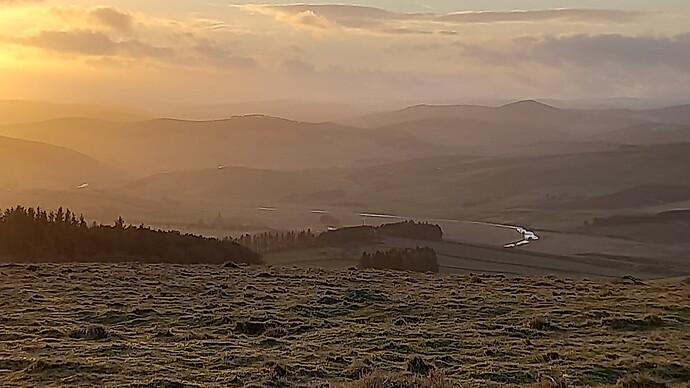 I was back at the car in just over half an hour. A nice afternoon out!

Mo announced that she was ready to climb a hill! I was uber cautious. I needed to find something that started from a high elevation to minimise ascent. No trees, due to windfall. Benaquhallie GM/ES-065 was the obvious choice, as it met these criteria and wasn’t too far from home. It’s where I first did ft-8 portable a year ago.

How to easily run Ft-8 on a SOTA Summit and bring in the DX! Benaquhallie, Aberdeendhire. - YouTube

SOTA wasn’t a priority here, but I put on an alert for 2m only, stuck the handheld (body only) in my pocket and carried the collapsed 2m beam in my hand. 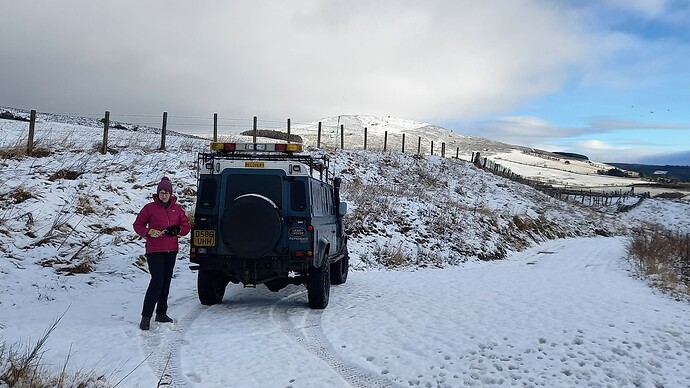 There had been overnight snow and I have to say, Mo did an amazing job getting up the hill! 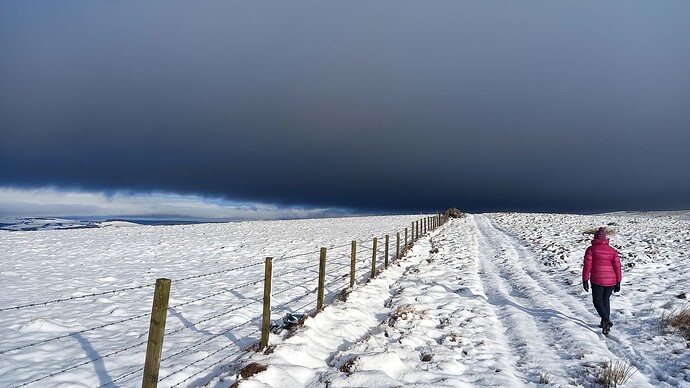 It was breezy at the top (isn’t it always?) but there is a nice drystone wall at the top of Benaquhallie, which provided some shelter. 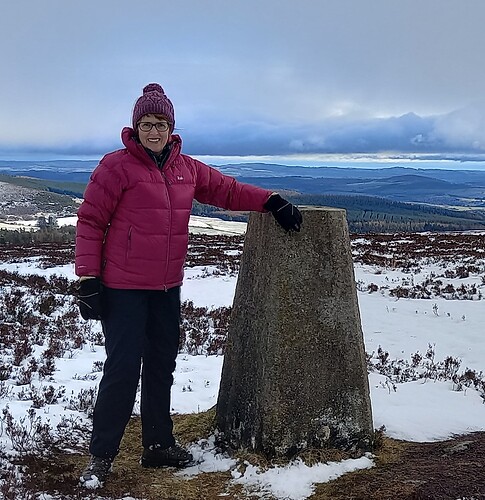 Today was more about a walk than SOTA, but I’d arranged to call Simon @GM4JXP for his Complete. Only thing was, he couldn’t hear me at all. I couldn’t ping my APRS repeater back home, so I knew something was up. I eventually managed a QSO with Simon and that was it. Of course, I hadn’t brought a whip, so it was game over.

On retuning home and investigating the various links between the radio and the driven element of the beam, I discovered that the coax was shorting out just behind the SMA connector. 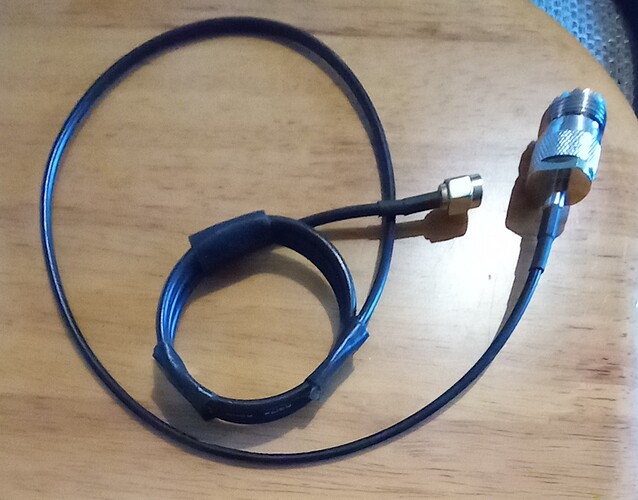 This morning, I made a new one from RG-58. Heavier, but somewhat more robust and with SMA connectors at both ends, which was fun…

but I’d arranged to call Simon @GM4JXP for his Complete

Thanks for the 2 Completes Fraser and the nice pics. I do the hoovering here btw - just got a new Dyson model which is brilliant

with SMA connectors at both ends, which was fun…

You wait till your eyes get 10 years older! I had a failure on RG174 at a connector as well. It was working but when the cable moved there were clicks in the speaker. Turned out when I stripped everything down that the braid was breaking from repeated water ingress and flexing despite attempts to water proof it and apply strain relief. To be replaced with some new crimp on connectors but it has lasted 12years so I can’t complain.

Good to see your good lady feels up to wanting to get out. I’m sure you’ll make sure she takes things steady.

When I was up at Lochearnhead on Monday there were some very obvious signs of storm damage to the plantations. It shows just how how windy it must have been in your part of the world as it was proper windy here and there was hardly any damage.

You wait till your eyes get 10 years older

Im already using a magnifier headband! The crimp tool is a Godsend. I still solder the centre pin though.

Our local woods took a real hammering. They’re privately owned. I reckon 2/3 trees are down. 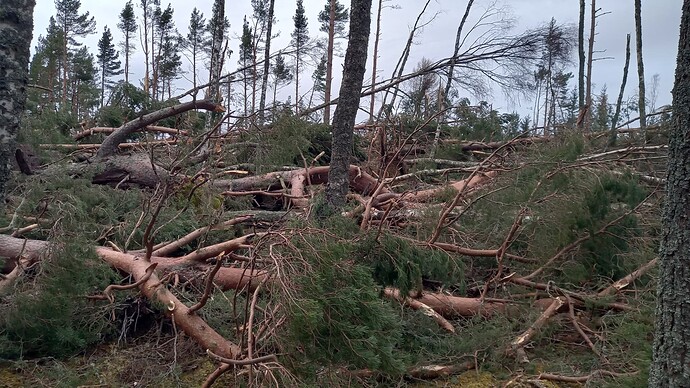 The Forestry Dept. in Aberdrenshire have basically announced, “Stay Away” until further notice. They need to clear the windfall and any trees that are leaning.

I see there is a Red Weather Warning for wind for SW England and S. Wales for Friday. Stay safe everyone.

Big Thanks Frazer @MM0EFI for doing this QSY on 20m

, I was a little late and couldn’t hear you on 15m

Éric, I did laugh when I saw your message to me on SOTAwatch3.

Glad to get you a new one.

Great to see Mo is doing well. Keeping positive and letting yourbody tell you when you’re overdoing it are IMHO the two key factors in making a good recovery.

Many thanks for a most interesting report and photos. Nice to see a bit of the white stuff… stand by for another 30cm by all accounts. Pity I’m down here at the moment in the wet and windy zone.

letting your body tell you when you’re overdoing it

I agree. Mo’s body tells her that by about 2pm every day, but try and stop her!

stand by for another 30cm

Snowfall forecast for 8 hours tomorrow. Considerable avalanche risk across the Scottish ranges. I’m working through to next Friday and just I hope there’s some left for me!

Thanks Fraser and Mo, great photos and video. Well done

cheers to you both

the AZ estimator on sotl.as

Can someone explain how this can be enabled?
I don’t use Sotl.as much and I can’t find this feature.
Thank you.

Guru, I touch on it in the video. 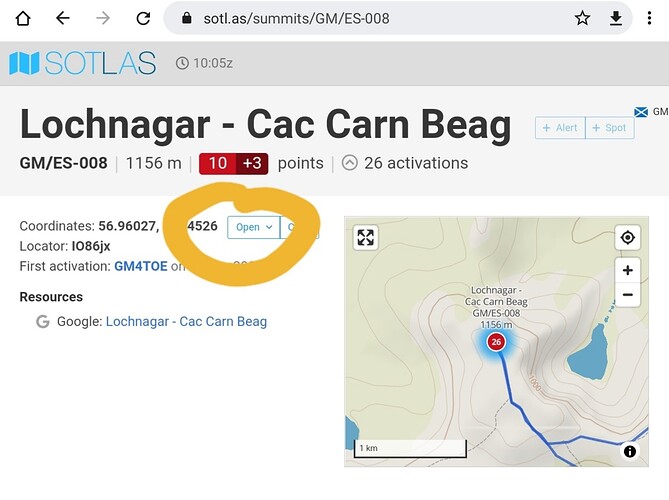 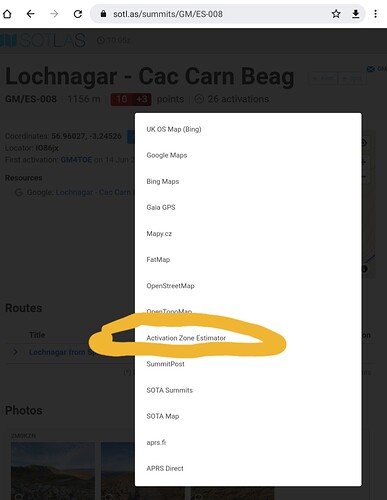 Click on the button and the map will soon appear. 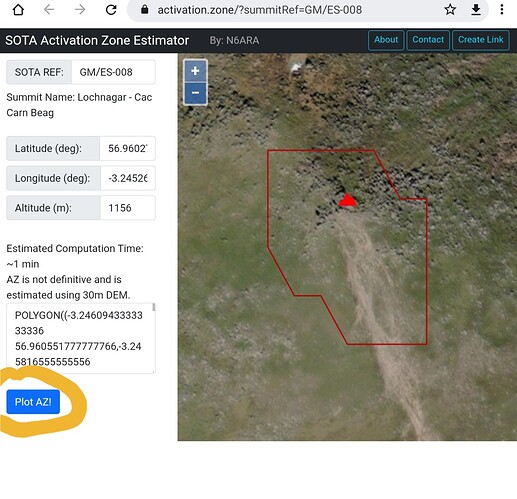 It is an estimate! It really helped me decide whether to go or not, as I needed the AZ to be in the trees.