First activation in a long while

Remember me? Well, yes I’m still alive but horse and I have been so busy that everything else has been put on hold for now. We’ve got a break from competing this weekend so we’re going for something a bit different. I’m going to attempt an activation on horseback. It’s within the rules but as far as I’m aware no one has tried it.

Please keep the overs short as he doesn’t take to standing around for long. There’s plenty of space at the summit so I’ll try walking around to keep him occupied. If we stop in a null, it won’t be for long. I’ll be using the FT-817 with the antenna slant polarised but of course it will be well over 2m agl so it won’t be your average HH activation. I’ll be using voice recording for logging due to a lack of spare hands.

I’ve posted an alert (which might change if the WX turns) and I’ll self-spot and/or call via GB3UK which is on-site. I see that Matt G8XYJ has posted the same time / mode from Burrow so a S2S might be possible as it’s pretty well LOS.

I’m looking forward to my first activation in over a year and to catching up with as many of you as possible.

Best of luck with the activation & S2S with Matt, I’m sure that at least that contact will be guaranteed

Interesting question about a horseback activation, the last time I looked at the rules I think they referred to “person powered” or “foot powered” final ascent. Being on horseback, only one of those would apply, but maybe not the feet as originally intended.

Although a horse is a mode of transport, it is certainly not a vehicle, & you would have no worries about powering your radio from the “vehicles” battery, but being really strict with the rules would probably mean you would need to lead your mount to the summit, rather than ride it. Once at the summit, if you then re-mounted & used the additional height to your advantage I would see no problmes rule wise.

I would take advice from those better qualified than me to qualify the rules, but as far as I can see, the above method I have described would certainly be a valid activation.

It is some time since I last referred to the rules as I am creature of habit, so my MO rarely changes, but if you are happy then best of luck!

Interesting question about a horseback activation, the last time I
looked at the rules I think they referred to “person
powered” or “foot powered” final ascent.

Time you looked again then Mark, the rule for activators states “The method of final access to the Summit must be non-motorised”, so I don’t see any problem with Richard’s equine ascent.

In reply to G4ERP:
Hi Richard

It is my first activation in about 2 months! So will no doubt be a bit rusty, however I am looking forward to the walk in! Burrow and Heath Mynd are always two of the most under activated WB Hills IMHO. So I hope to work plenty of people!

I am planning a break in-between the SOTA Summits with a bit of HOTA (HuMPS on the air) if any one is interested, I will be on Oakley Mynd (G/HWB-031) from about 11.30 Zulu using 60m and 40m! However the main reason will be to enjoy the views and the cheese sandwiches!

Heath Mynd should be a nice hill! I have always enjoyed that little summit before my SOTA Activities, so to go up it again for a second time on SOTA will be most enjoyable!

Please keep a look out for me on this website or summitswatch! I have alerted on both!

Thanks Mike, It probably is time I checked the rules again, though I doubt my “once in a blue moon” activations will be affected

Both Burrow and Heath Mynd are super hills. I hope you have a good day.

So, everything’s ready this end and hopefully we’ll get that S2S tomorrow. It’ll be great riding up on Cleeve Hill again after such a long time. I reckon the last time was in 1979. If I can persuade a passer-by to have a go with my camera, I’ll put something on Flickr (if I can remember how …)

Well, we made it and even qualified the summit but I’m afraid we didn’t spend long there. From the moment we arrived, horse made it clear that he wasn’t going to stand still for anyone so we established a “holding pattern” doing figures of eight at the walk. This just about kept him occupied until we got buzzed by one of those biplanes they use for wing walking. It was very low and it spooked him. From then on, he just wanted to head off. We’d qualified the summit by then with seven QSOs so I decided to call it a day and rode off (not into the sunset …).

The main object of the trip was pure nostalgia but it was a useful learning exercise and we may well do another soon when our schedule allows. If it was also a SOTA “first” I wouldn’t be too surprised but that wasn’t what it was about.

Unfortunately there was no one at the summit I could collar to take photos but I’ve a few I took on the way. I just need to remember how to use Flickr.

Thanks to those who helped this morning.
73, Richard

The main object of the trip was pure nostalgia but it was a useful
learning exercise and we may well do another soon when our schedule
allows.

A most interesting activation Richard - pity I missed you. Presumably WB-008 is now on the cards.

I see where you’re coming from with that suggestion

but unfortunately it’s a bit far to travel him in the trailer. Still, you never know… Bredon is the other one that’s an obvious target. I could ride him there and back from the stables given an early start. I’d like to do Cleeve again and now he’s been there once he should be a bit more settled. I’m now thinking about improved antennas!

In reply to G4ERP:
Hi Richard

I will start by apologising for my no show. I play cricket on Saturday’s and I ended up coming in with the team at 34-4! As a result I ended up batting through for about 2.5 hours to get what we call a losing draw in league cricket!

As a result I could barely move the next day HI! This feeling was made worse by the bruises that I had on my left leg, and the windy weather outside!

4 weeks left till the end of the season, all being well October is the Month I will aim to finish off any remaining WBs I have for 2011!

Catch you on the air soon

Catch you on the air soon

4 weeks left till the end of the season, all being well October is the Month
I will aim to finish off any remaining WBs I have for 2011!

Heath Mynd is one of the few WB summits I have still not worked for a chaser point, so I hope to catch you when you’re there for a new Unique! (I also need Wapley, Shobdon, Burton and Aconbury to complete the set. All of these I have activated myself, but never worked.)

In reply to G3NYY:
Hi Walt

I have no plans to go out/p this evening for the 4m contest! I am out on the third Tuesdays for 23cm so I cant face another contest HI!

However I will give away some points on 4m from home with the Transverter and the 4m Halo!

A couple of weeks ago we had another outing up on Cleeve Hill. Not surprisingly, it was a lot colder this time but there are plenty of gorse bushes up there - even some big enough to provide shelter for a horse.

Anyway, thanks to those who helped qualify the summit on 70cm and especially G3XQE in Coventry for the ODX.

While we were on our way down, a walker asked if he could take a photo of us so here’s the team:

As many of you know, I was born and I currently live in the city of Pamplona, well known all over the World because of the Sanfermines and the running of the bulls.
Well, the 8 days long fiesta of San Fermín started today at noon and I went with my wife to the first bullfighting of the 2018 Sanfermines. This 1st bullfighting on July 6th is different to those of the other days until the fiesta ends on July 14th.
Today’s bullfighting was on horseback and while I was watching the beautiful performance, I was thinking on whether someone had ever performed a SOTA activation on horseback.
A quick search on the Reflector showed me that yes, at least someone has done 2 activations on horse back.
I wanted to paste here some pictures I took today during the bullfighting but I’m writing this on my smartphone while taking care of my 82 years old Mum after the surgery she had this last Wednesday, and I unfortunately don’t know how to paste or upload pictures with the smartphone.
Perhaps, I’ll do it tomorrow with my laptop once I’ll be back home.
Do any of you know how to paste pictures on a post while typing it on a smartphone?
73, 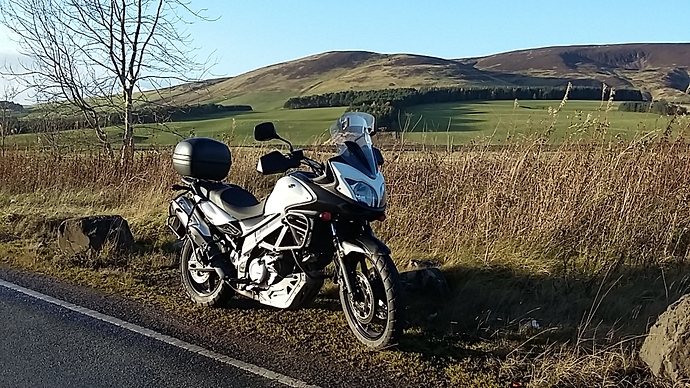 In Reply, press small icon above that looks like an arrow pointing upwards on a bar. From there you have select where you want to retrieve your photos. Different locations for different people.

Hello Richard,
How about a SOTA horse activation with some real power?
Ken press small icon above that looks like an arrow pointing upwards on a bar. From there you have select where you want to retrieve your photos

Thanks Neil for the tip, although it didn’t unfortunately work for me on my old Samsung Core phone.
Now I’m on my laptop at home after having spent the night at the hospital, where everything went well and smooth, and I’m going to post some of the nicest pictures I took during the horseback bullfighting.
Cheers,

Sorry, Guru, I deleted your post, I’m quite relaxed about off-topic posts but images of bullfighting are likely to distress and stir up violent responses from animal lovers.

OK Brian. No problem with me about that.
Cheers,

I deleted your post, I’m quite relaxed about off-topic posts but images of bullfighting are likely to distress and stir up violent responses from animal lovers.

It is worth remembering that this is ineffective for those of us who read the email feed of the reflector.