Yesterday heard a U.S op coming thru on 7.025 cw very strongly late in the afternoon and was pounced upon by a couple of the locals here.

The next morning worked K4QS S2S whom was on the far eastern side of N. America 2100Z so there may be a chance of a Sunday morning contact if I can drag myself out of my sleeping bag at that time.

With so many targets it would be rude not to come out to play, been looking for an excuse and free time :o)

I’ve had to change my Sota Summit to Mt.Randall VK6/SW-039 as I need to get back home to get to my friends Birthday Dinner at 11:00 UTC. Going to Mt.Randall allows me more time on the Summit .Pack up time will now be 08:30 UTC with the extra 30 mins possibly making the difference between working into Europe or not.

Wishing everyone a Happy Easter and a good activation on Saturday. Hope to get some of you in the log.

Nothing new you all say - well possibly so - but in any case … I chased some members of my old club to get to a SOTA summit in VK for what originally was a Good Friday planned activation. For several reasons, I then changed my plan to activate early on Saturday from Eisenberg castle ruins SOTA Summit and announced it here on the reflector, forgetting to email the club members, so under the leadership of Rod VK2LAX they’re heading out on Friday still to VK2/HU-093 Mt Elliot not Saturday.

So I will now head to a local summit early tomorrow before heading on to my other two planned summits around the middle of the day.

Saturday, I will still head out to Eisenberg. But if anyone wants to get on tomorrow (Friday) early (from home or a summit) the contacts would be appreciated!

Looking pretty rough here too. 28C and a slight chance of a shower early in the morning.

No Pain. No gain Tom. A little rain never hurt anyone.

A little rain never hurt anyone.

True - but a lot of rain could hurt my 817, and lot of gales could hurt my GP and mast. Both are forecast. I’ll give it a miss if you don’t mind.

First of all thanks to chasers who perservered and made a contact with me on one of my three summits today. I had a vareity of problems, most of which either I hope to solve before tomorrow or will not be relevant.

My first summit from 0600 UTC was intended to try out Long Path propagation. On 20m I could hear almost nothing. The band was worse than dead, even the normal background noise was gone. I thought I had an equipment problem but this got better from 0700 UTC, so I think it just was conditions Somehow Terry G0VWP forced his way through the conditions and he was my only contact on 20m. 40m was normal - busy, QRMers, industrial noise and the rest. There was a VK6 activator out but unfortunately I couldn’t hear him - did anyone else in Europe manage a VK/ZL contact this morning?

The other two summits had more physical problems in setting up an antenna in 3 feet or more of snow -5 degrees C and limited space with lots of tourists. The physical problem getting the dipole up, I managed although from Laber half of it was effectively lying in the snow - the bigger problem on the last two summits was that I could not see what was on the rigs display becuase of the high light level around. The last summit Wank, was particularly bad and I had to just hope the rig was still on the frequency I had last used on Laber - - it was, but so was another QSO after a few minutes and I simply couldn’t move so more QRM.

OK, here’s some possible good news for tomorrow - I’ve just watched the spaceweather item on Hamnation and if Dr Skov’s prediction is correct sun spot # 2703 is comimg around the Est Lim and will raise the SFI from the current 67/68 to 70/71 from this evening onwards for up to two weeks. This is only a small increase but it might just make the difference tomorrow. K appears to be constant at 1.

To those who are still able to get out tomorrow morning, good luck and I hope to work you.

did anyone else in Europe manage a VK/ZL contact this morning?

I was out portable this morning, not SOTA. The 20m band was in poor shape. I worked one G station and finished up having to S&P four other contacts,. Worked Ernie VK3DET, but not until 0747z tough contact though. Oddly enough, worked Brazil at 0835z. I was planning to activate Billinge Hill tomorrow, however, the WX forecast is rubbish, so, I’m out

Hi Chris,
I also hear from time to time VK & ZL SSB stations on 40m early morning. Not sure if they are coming Long path or Short Path, I’m sure they have some impressive antenna set-ups though!

Batteries recharged (the rigs and mine) we’ll see what comes tomorrow.

73 and good luck to those who are still able to get out (if not please chase).

Sorry all,
I’ve had to bail.

I set off from home at 06:40 local (04:40 UTC) and as I stepped outside, after no rain yesterday or overnight, it started to spit with rain - nothing to worry about I hoped. It’ll stop and even if it doesn’t it’s bearable.

After about 20 minutes driving, the rain had become a constant down-pour, so I pulled into a lay-by to asses whether continuing the 1Hr+ drive was sensible. Looking in the direction I would be going the skies were full of black clouds and at that point the regional weather forecast came on to say the rain would be continuous until about midday at least.

Given that the walking track up to Eisenberg is both steep and slippery even in the dry, it will most likely have been a bog with a river running down it, by the time I got there.

I considered going to a different summit, just to get on but the weather was looking fairly threatening, so no matter where I could have gone, it would have been questionable as to whether I would have got to the summit.

As the SFI hasn’t raised as predicted, it’s still down at 68, I decided the best option was to call off my activation and wait for a better day (Terrestrial and Space weather-wise). actually after returning home, I see that as well as SFI still being at 68, the K index has gone up to 3 so not only haven’t the RF conditions got better, the noise level will also have come up.

For those who are still going out, well done and I wish you success, hopefully you’ll bag some regional S2S contacts if not DX S2S contacts. Then again, I’d be happy to be proved wrong.

Once again, sorry for my last minute cancellation but I think it was the right call after being tired from the three activations I did yesterday.

Hi All,
weather was not too nice on DM/HE-570 either: Fog, wind and 4°C, but no rain at least.
Following the spots of VK6NU and VK2IO on 20m I could hear something in the noise, but no chance to get through with QRP.

Under these poor conditions, 30m CW seemed to be the only reliable band, allowing ONE DX-s2s-QSO with VK3PF/p (thanks Peter for taking out the straight key) and another DX with ZL1BYZ, both around 06:50 UTC.
Managed some more s2s-QSOs within Europe on different bands (thanks to HB9DQM, HB9AFI,
SP9MA, SV2RUJ and Gerhard, DL4TO).
Looking forward to meeting you all and many more next time!
Chris, DL4FO

Think I heard you on 30 meters but quite low down, but not a band I would have thought of for a EU Sota Contact. I had an awesome day, will report shortly.

Plenty of EU’s heard on 40, but only one worked by me and IIRC Bernard vk2ib bagged 3.
We heard Chris DL4FO working Peter but Bernard was unable to catch him afterwards.

Plenty of EU’s heard on 40, but only one worked by me…

Presumably that was Marko OH9XX - I am fairly certain you were on the key at the time. I heard Manuel HB9DBM/P call you also. I could copy odd bits from you, but you disappeared beneath the noise when my neighbours rolled out of bed and raised the noise level with their electronic gadgetry. Oh for a home QTH in the middle of nowhere! Pity the WX was so bad here otherwise I would have been out on a summit.

I listened around for other VKs where spotted, but you were the only one I copied Warren.

Sounds like 20m was a real struggle all around. We did OK from Mount Banks but had to leave before we lost light (loose scree and a heavy pack seemed like a bad option for torch light) so my last contact was only 0635. It sounds like things might have opened about an hour later. I think I was hearing SV2RUJ but right on the noise floor.

I am now excited to make an EFHW myself (borrowed this one from VK2HHS) and keep pushing for DX. This trip we have settle for a meagre 2000 to 3000km range with lots of contacts from ZL and John from VK6. 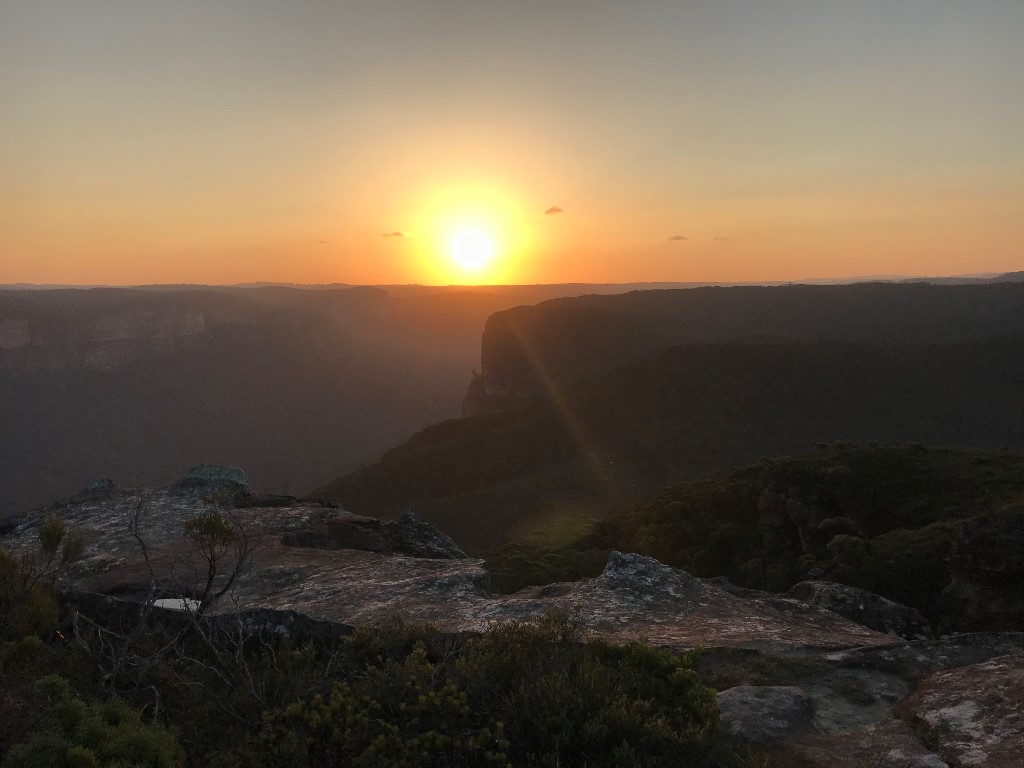 Hi all,
Had a good late afternoon activation. Used an inverted L for 160 m with about 13 m vertical and 27 m sloping down to the NE, 4 counterpoise wires and an LDG tuner with the IC-7000 on 30 W most of the activation.
Great to make a S2S with Chris DL4FO on 30 m. A few other VK S2S contacts and heard several EU stations but was unable to break through the wall. Finished with 3 x S2S on 160 m CW. I packed up in the dying light and came off the summit with the moon rising.
Cheers,
Peter VK3PF

signals of VK2IO in cw and VK6NU in ssb on 20m were unfortunately quite low down. Sometimes I got some fragments of the signals, but this time, there was no chance for a qso.
Tnx for all (europe) chaser-qso’s, and for my s2s-qso’s with Marek, SP9MA/p, Milosz, SP9PND/p, and Chris, DL4FO/p, who gave me the clue to this s2s-event.

I am looking forward to a new chance for a s2s-dx-qso!