DX, S2S, and SOTA milestones achieved on a big activation

I packed up the truck and headed for a local Southern CA drive-up 6-point summit - Thomas Mountain (W6/CT-016). It was Friday evening, and I had no plans until Saturday afternoon other than working lots of HF.

Packed in the truck was my home station, an Icom IC-7300, a relatively new antenna, and plenty of battery power to last for hours even at 100w.

The primary goal of the activation was to work DX, specifically S2S DX if possible. I brought a laptop to operate on FT-8, but planned to operate primarily CW and SSB. Aki, JI3BAP had posted on the SOTA reflector that he would be on a summit in Japan at the same time, and would try to make contact on FT-8 or CW. 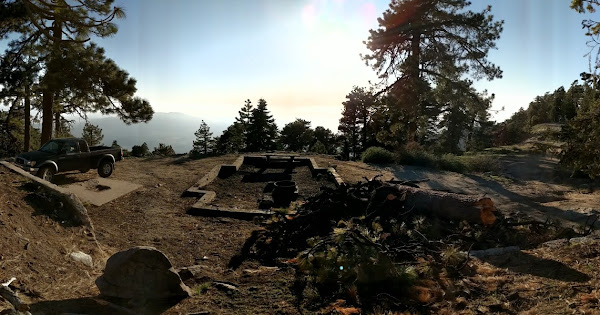 At the edge of the site, the terrain drops away steeply to the West which will be helpful for propagation across the Pacific. I set up my newly built antenna, a half-square built for 20m. A half-square antenna is basically a set of inverted ground plane phased 1/4 wave verticals. It requires two antenna supports, but provides a bit of gain and nice low-angle radiation broadside to the antenna.

By 7:30PM (0230z) I was set up and ready to operate. I posted a spot and began calling on CW. As usual, the contacts began rolling in quickly. Contact #4 was the first DX of the evening, regular chaser extraordinaire, ZL1BYZ. John gave me a 579 signal report. A few contacts later, the first of the VK stations, VK4TJ, came back to my call. We exchanged 339 reports and continued on. And then a couple of contacts later, the first Japanese station returned my call, JA1VRY, again with a relatively weak but readable signal.

For kicks, I switched over to SSB around 0310z and the flood gates of VK and ZL opened up. Most VK stations were strong and easily readable. The longest DX of the activation, VK7JON, 9420.7mi away in Perth reported a 56 signal report to me in response to the solid 58 I gave him.

The word was out in VK land that I was copyable there, and many contacts ensued. As the SSB responses slowed, I switched back to CW and found another slew of VK and ZL stations returning my calls with numerous 579 signal reports.

Then, in the mix was JI3BAP/3 for the Summit-to-Summit contact! I had listened for him earlier on 20m CW but couldn’t hear him. The conditions had improved, and he was now a solid 559 into Southern California with his 50W station. This was my first DX S2S and one of my primary SOTA goals for the year.

My other SOTA goal for the year is to make 100+ contacts on an activation. I knew this one would have a chance at topping that due to the extended amount of time I planned to activate, but I wasn’t counting.

Around 0500z, the responses to my calls slowed, and I decided to call it a night. I set my alarm for 6AM local time (1300z) with hopes of EU DX in the morning. 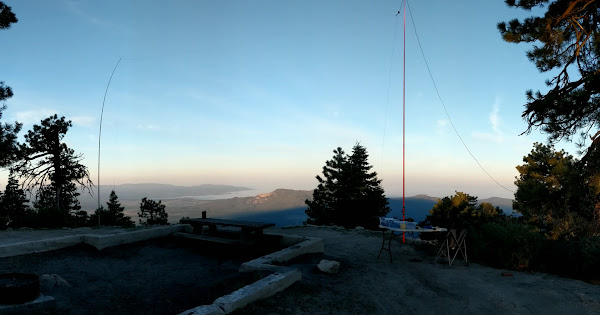 The morning light was gorgeous with marine layer down in the valleys, and a hazy glow on the local summits. I resumed operating on 20m with the Half Square antenna initially on SSB.

First contact of the morning was K3S, a special event station for Marconi Day. I then put out a spot and picked up a bunch of US contacts over the next hour or so. In the mix was a S2S chase of NA6MG on a nearby summit.

I switched to CW hoping for some EU DX, and about a dozen contacts in, I heard SA4…

A few calls later, way down in the noise, I heard what I thought was ON3… I called back and received multiple repeats in return but the signal was just too weak to copy clearly. Danny in Belgium has mountains of patience as he repeated his call 30 or 40 times as I worked through ON3… ON3UT… ON3VT… and finally ON4VT. I sent him a 229, and he was equally patient in repeatedly sending my 339 until I was able to copy. Danny emailed a QSL card that evening. 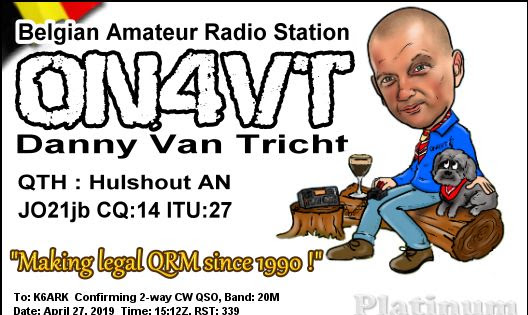 I realize now that I should have turned the antenna 90 degrees for EU. Those contacts were off the side of the antenna which is 3-6dB down from broadside!

Around 8AM, (1500z) I decided to swap out antennas in preparation for some S2S efforts. I brought down the Half Square and sent up the linked dipole.

Many more contacts ensued on 20, 30, and 40m with many US S2S contacts. One of those contacts, with N1OIE, pushed me over 1000 chaser points into Shack Slothdom.

I wrapped up the day just before noon with my last contact at 1800z. 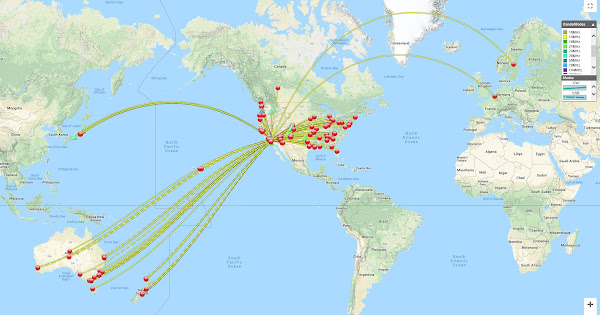 I couldn’t be happier with the new antenna. It will surely make it out on some additional summits despite the extra weight of the two masts.

I can’t wait for the next evening and morning activations to work some more DX.

Many thanks to all the chasers - it was a blast!

Congratulations on your very successful activation and reaching those goals.
Would it be possible for you posting here some instructions or a link to some web site explaining well in detail the construction of that antenna?
Thank you.
73,

This is awesome Adam! Sounds like the type of activation we all dream about. That antenna worked great. Happy to be in your log!
73 de KR7RK

Here are a couple of links that helped me out in the design and build process:

Operating Suggestions Keep it low Tails no more than ¼ wavelength above ground for a clean pattern, but high enough that people and animals aren't likely to contact high voltage ends Keep tree limbs away from tails 2. May be suspended from metal...

Keith, it was easier than I thought, and I think the results are repeatable. Try activating in the evening and morning for DX. Optimize your station as best you can - get your antenna as high as possible, use an antenna with a bit of gain or better low-angle radiation, run higher power… If you try it, the chasers will come.
Adam
K6ARK

Nice, great fun. I guess I was two of your S-2-S contacts, once on 20 and then again on 40. I had run up Aztec Butte, a prominence of Island-in-the-Sky section in Canyonlands, near Moab, UT. My rig was 5w from an MTR3 and antenna an EFHW wire.

I have been using a half-square array on SOTA for quite a few years now when I am going primarily for DX. It has worked well for me, and recently worked GM0GAV S-2-S with it. I only use one mast, however, a nine ounce one at that. I hang the wire over a tree branch for the other end.

I feed mine on the end using a high impedance transformer. This is much easier than feeding it at a corner. Eliminates problems with RF on the feedline as there is no feedline

I cut the wire for resonance on 40M where it is a half-wave. I hang a stub from the middle of the wire to adjust resonance for 20M, necessary because a full-wave is NOT resonant at the same length as the 40M half-wave because of missing two ends and thus end effects. It is also not resonant on 15 or ten, but with an ATU tuner to clean it up, can work on those bands as well.

Fred, yes! Thanks for the two-band S2S.

Nice to hear the Half Square has worked well for you too. Many of the summits I activate don’t have suitable trees. On those that do, I have used a single pole and tree in combination.

Unfortunately all of my lighter poles are too short for the 20m half-square, so I’m relegated to bringing the bigger, heavier Jackite poles. On the plus side, they handle high winds very well.

I don’t own a tuner, let alone one that can handle 100W, but feeding at the upper corner is quite simple with some lighter coax. I am, unfortunately, sacrificing multi-band capability.

I may just have to build a 17m or 15m version as well, perhaps even with 3 elements ala bobtail curtain style. Have you tried that? How about any other wire antennas with directionality and gain?

The tuner at the end is pretty darned simple. If I were running 100 watts, and a rig like you are using which I suspect has an ATU in it, I would use a 9:1 balun to take the 3,000 ohm impedance down to something the ATU could easily handle.

My wire is just #26 teflon, super light weight, the pole starts at 18 inches collapsed length, and stretches out to 18 feet. In my hands I can reach up to place the wire over a tree branch 25 feet up which is plenty. I actually hang both ends over branches in this way. It is not the least bit critical for the horizontal to be 34 feet long, just make it symmetrical.

The gain for DX is far more than the 3 DB achieved by the phasing. The take-off angle is perhaps ten degrees, and at ten degrees the gain over what is taking off that low on an EFHW is likely ten to fifteen DB.

Yes, I have used a Bobtail, great fun, but no, not on a SOTA peak. My activations are generally brief and I don’t want to deal with something that might be time consuming to get up and down, not worth the extra two DB.

Always QRP, my best DX on a SOTA peak was UR5FAM/mm. He, too was QRP. He was located on a ship in the middle of the Indian Ocean, and he confirmed with a QSL.

UR5FAM/mm. He, too was QRP. He was located on a ship in the middle of the Indian Ocean, and he confirmed with a QSL.

Thank you very much, Adam, for this great information!
73,

And I am hearing you right this moment working AI4SV, hi hi

I did copy you calling me on 20 April, from PW-022, but I don’t think you were copying me well with QSB.

OK Fred, it’s sometimes hard with the QSB. At some times the copy is weak but perfect Q5 and an instant later, the signal disappears in the QSB. I hope to be able to contact you one of these days.
Regarding my recent chase of Jack AI4SV that you copied me, Jack was a steady signal here without QSB.
It was a different story when I chased Paul N1ZF at 16h51 today as the QSB was very severe and it took me various chances by the time I managed to copy him sending my callsign in return and then the report, as he was often disappearing in QSB. But we finally made it!
I’ll be looking forward to chase you some time soon.
73,

Great activation and congratulations on achieved your goals!

It was a great experiance for me as well. I had never brought FT-991
out for SOTA. I usually use FT-817. I called by 5W with FT-817 at first
then switched to 50W with FT-991 actually.
I learned how heavy to carry the equipment, how fast the battery runs out
and how easily make DX contacts with high power operation.

Thank you for a great opportunity.

I’ve worked 2 Russian /mm from SOTA summits in the Uk. One was UR5FA/mm. Oleg told me he was an ex Radio Officer who was now the Captain or Chief Officer.