Dr. Livingstone, I presume? Encounter on a SOTA summit

These famous words, dated back 1871 are a good way to describe the joy of meeting another activator on a mountain top. Last Sunday, september the 20th, I met Alberto EA2DCA and Iratxe EA2DNO. When they were approaching me, I recalled this history quote.

The story began when I received some days ago and invitation from them to do the joint activation of two summits, Saioa EA2/NV-021 and Zuriain EA2/NV-023. We tried to fix where to meet, but due to the fact we live in separate areas, we agreed to meet on the very summit of the first mountain, as we would use different routes in the ascent. 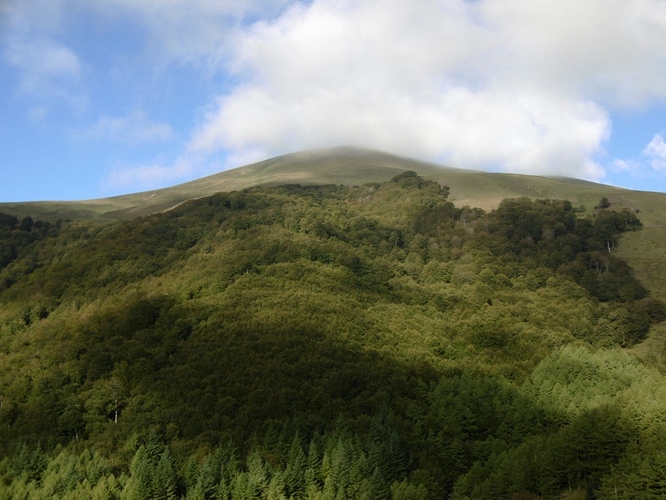 The low height clouds around provided nice views, as also did the far Pyrenees chain: 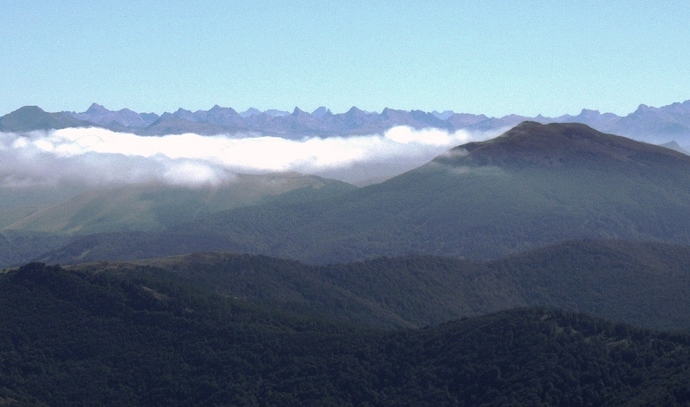 I arrived in Saioa half an hour ahead schedule. It was sunny but windy and I put on all my extra clothes. I grabbed the VHF handheld, installed a half wave vertical for VHF and started calling CQ while waiting them. I logged some S2S with EA2EEB, EC2AG/P and EB2FDT/P. 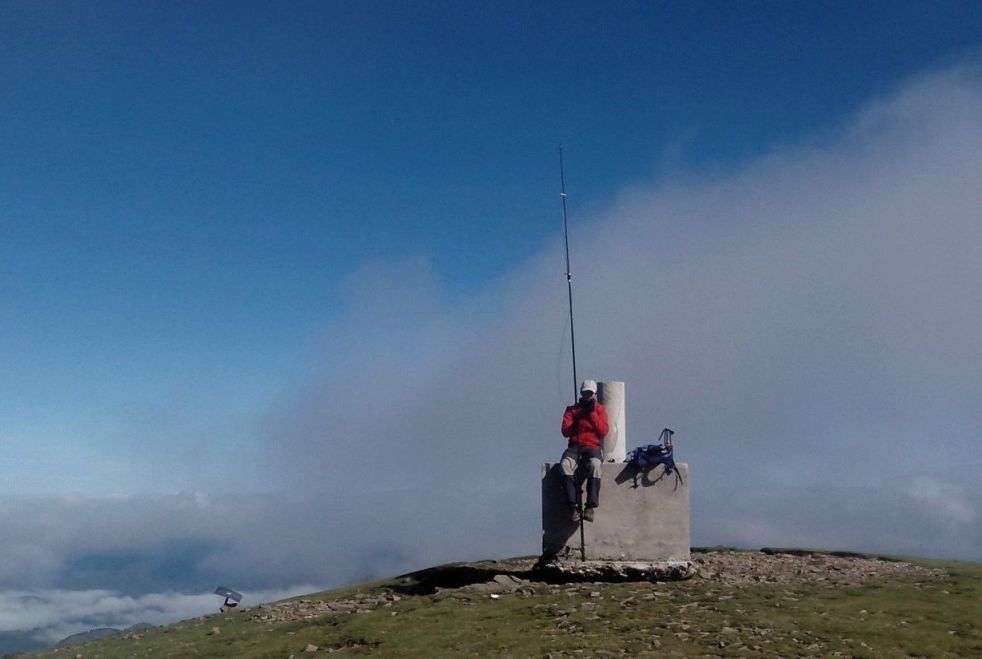 Soon after the first contacts Alberto showed up approaching. I left the radio and jumped to greet him. Iratxe came behind and we all celebrated the start of the joint activation taking a picture of the team: 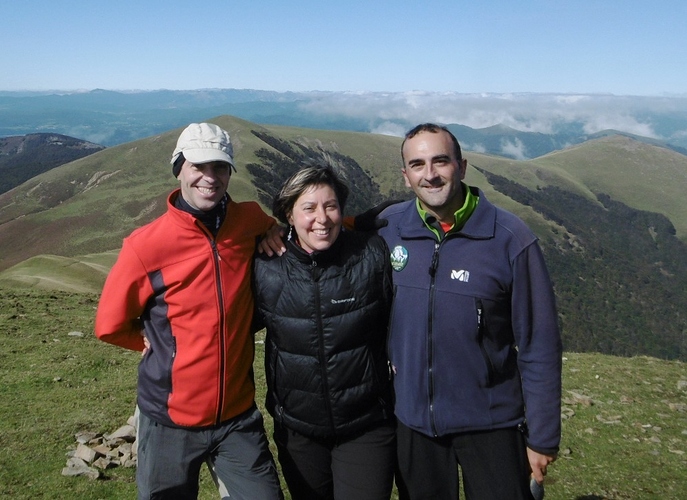 We agreed to start HF. I put my antenna on the trig point and they separated a bit and installed their GP for 20m. I saw them running on SSB and then came back to start calling in 20m CW.

I could just log 2 contacts on CW. The summit had been progressively populated with so many people that in fact it was crowded! I was sat in the middle of them and It was difficult to hear the radio, even with my earphones on, because kids were shouting and running around: 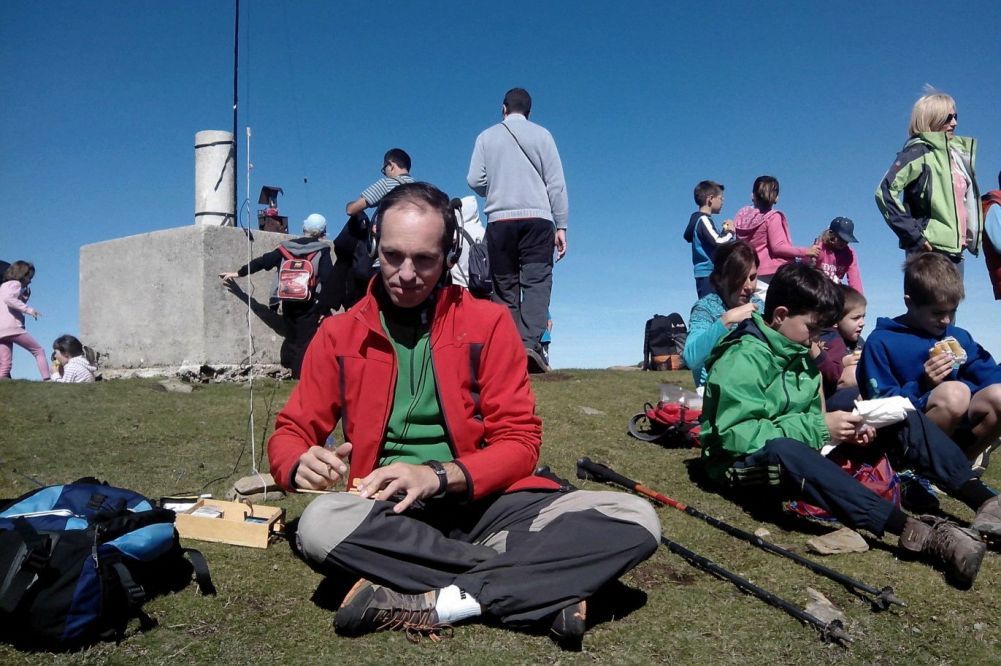 No way to concentrate…

I felt fear I could hurt somebody with my antenna. I decided to abort operating and dismantled everything in a breeze while Iratxe was enjoying her nice pile up down there.

I moved towards them and could hear the signing off with W1OW, wow! 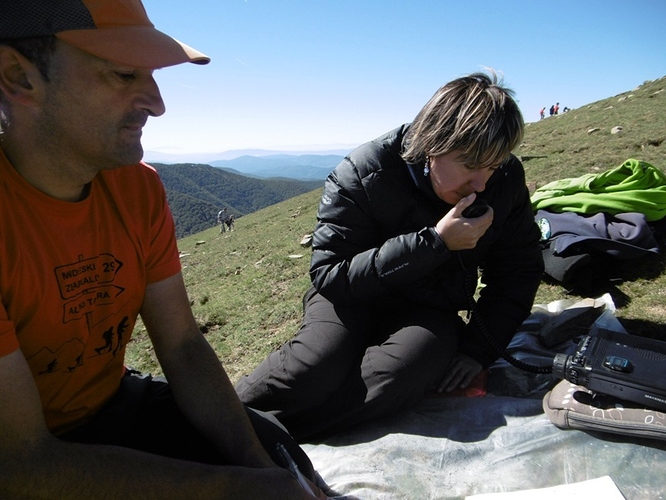 We stayed a bit more, and decided to move towards the second summit.

In about 1 hour we were installed on Zuriain. By the time weather was excellent, plenty of sun and no wind at all. I installed again the VHF vertical and agreed that Iratxe would run there. We soon heard and worked S2S with our dear friend Guru EA2IF/P who was just starting his activation not far away. Thanks a lot! 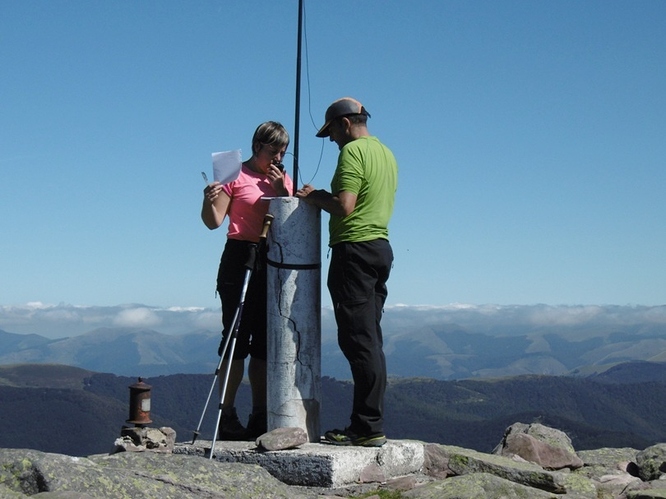 A bit further we installed the 20m GP. Alberto ran SSB and afterwards I used his gear to end with some calls on CW.

In the middle of the activation a couple mountaineers arrived and I spent some time with them as they showed much interest on the activation in progress. They were impressed as I was telling them the country names of every station Alberto was working. A large number of different countries as you could guess…

We ended the activation working EA2EBX/P S2S on VHF. Then we packed everything and we got back together, chatting and enjoying this fantastic day. At mid way we had to split. Time for a big hug and wishes to repeat again in the future. Maybe I’ll have to visit their area next time?

Thanks Alberto and Iratxe for a wonderful day. VY 73 es CU.
Ignacio EA2BD 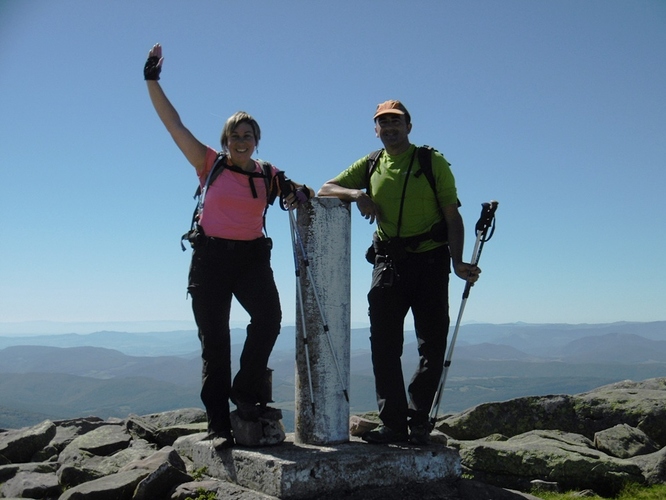 Pity about the ‘kiddy’

cool to have a meet up on a summit, but so busy!!

I am surprised I have never seen anyone activating a summit in all my walks up summits just for hiking. People are activating my local summits all the time too!