I was activating DM/BW-461 today, to test my newly built linked EFHW and the frequency extension of my FT-817 which I finally managed to do. While I was happy about the performance and busy on 40m, a local hunter who was checking the hunting stands in the area came to me, asked what I was doing and after explaining SOTA to him, he told me that the place is private property and they don’t want radio operators there any more. I hat to QRT immediately. In the spirit of SOTA, I politely apologised and packed up my gear.

My apologies to all chasers who were calling me in the pile-up that was going on. (I prefer not to argue with people carrying rifles when I only got a Swiss army knife on me

Since the conversation was generally held in a friendly way, I asked where he sees a problem and he then told me that apparently too many people have been driving up their cars there in the past and operated from there. (My car was parked further away on the official parking lot, but that didn’t seem to count).

Hint for future activations: after I got home, I checked the situation using the official Swiss topographical maps. The summit is about 150 m from the Swiss border, while the activation zone towards the north extends well into HB9 territory. The map shows a path in the forest which is partially between the 920m and 930m altitude line and thus within the AZ, I just don’t know how far you can drive up the hill on the Swiss side. It might be worth checking if the footpath from the summit crossing the DL/HB9 border, which is shown on sotl.as but not on the official maps, is viable. I’ll go for that next year when I can collect points for this summit again.

Sorry to hear about your experience. Three years ago, I did precisely what you suggest – approach on foot from the HB9 side and activate right next to the border-crossing footpath, avoiding the estate with its horse business. The boundary stone made a good antenna support and allowed me to omit the DL/ prefix (which admittedly confused some chasers) 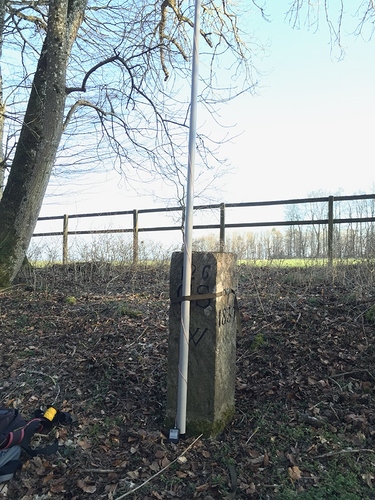 At the time, access to the estate/summit was prohibited anyway due to an occurrence of strangles (horse disease): 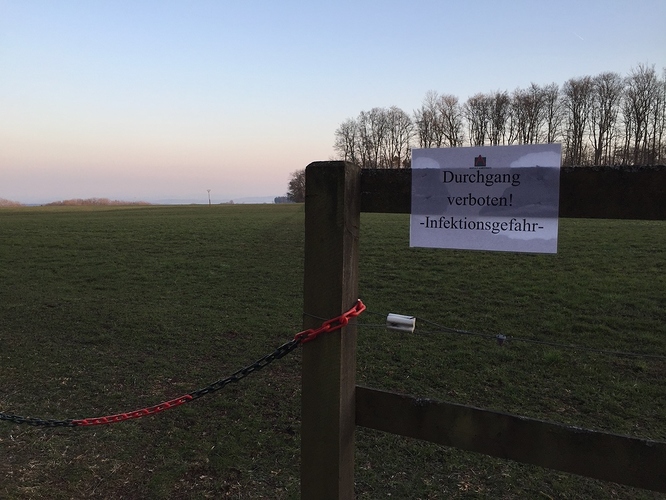 a local hunter who was checking the hunting stands in the area came to me, asked what I was doing and after explaining SOTA to him, he told me that the place is private property

Do you think that it was his own property or did he say to act as the owner’s representative? I wonder how that can be proven on the ground.

The logo of the nearby estate was both on his jacket and his car. He was definitely an employee.