Which datamode(s) will you be able to take part in as a chaser, activator or both?

I understand the argument that CW is a datamode, but it isn’t generally considered in that category, and definitely not in SOTA. If you do a SOTA activation in CW, you select the mode as CW when submitting to the Database, not DATA.

CW is not considered or included as a Datamode in the 2020 Challenge.

Chasing only for me by the way, I don’t activate using DATA modes, only CW & Phone.

Prompted by the challenge, I’ve just got WSJT-X set up and working, and had a few QSOs from home using FT8. The same setup could be used for other data modes, but I’ve only voted for FT8 as I’d like to explore that before running off in all directions…

So, I hope to chase from home, and I may attempt an activation if the weather is kind.

(After much pondering, I bought a MiniProSC from G4ZLP.
I think this will also serve as the “second sound card” necessary for running freeDV… and I look forward to attempting some moonbounce receive using jt65 at some point, so that all helped to justify the spend!)

If there is any interest in digital SSTV I could re-assemble my set up here.

I’ve been intending doing a SSTV SOTA activation for years Brian but still not realised it! I doubt I’ll achieve it in time for the February datamode flavour as FT8 is bound to take priority and I do want to try and make PSK happen again (Fldigi TX still sticking on atm, and I have to kill the program to stop it - planning to experiment with a feeder extension cable and a choke balun next).

Hoping to be on FreeDV as well as C4FM in the March DV flavour, but again some work and study to do before then. This is great though - the true spirit of ham radio - “self-training…” and all that. It’s stimulating learning new stuff and stepping out of the comfort zone - and incredibly satisfying when it works! (No doubt due to all the experience of frustration when it doesn’t!!!)

I had contemplated sstv as an option, but it will come down to getting myself organised in time.

There will be chances later in the year, we don’t have to be ready for the first appearance of a flavour - well, except for 70cm and 17m that you get just one chance at.

There are other online forums for other non-SOTA operating too Phil.

I will be active with JS8call and FT8. Might try something like FT4 or SSTV as well, but I’m unsure of that.

I had a play with FT4 at home on Sunday afternoon and managed a JA qso on 20m running about 30w.
With a 7 seconds transmit window I think FT4 offers some benefits over FT8 for SOTA if you are running bit higher than 5w.
I will definitely give FT4 a go next time I am out on an activation

I can only chase using digital for SOTA, and only using the FT8 and FT4 modes. 100 Watts and a dipole; the DX has been remarkable. Generally FT8 is superior for me to be decoded. The exception is 20 meters during the crowded times (big signals and antennas on that band) when I seem to have better success in the much less crowded FT4 section. My best digital DX bands have been 17 and 30 meters. Looking forward to some digital SOTA QSOs.

I just posted my Alert for Feb 2nd using “Data” mode.
When I filtered the Alerts, my post is the only one showing for “Data”, anywhere, any time!
What? No competition at all, for the February Challenge?

I’m planning to try FT8 and PSK31. I’ve always wanted to try a SOTA activation using the PSK31 that is built in to my KX2 (using CW paddle to send). I made a few short QSOs that way when I first got the KX2 in 2017, and never tried it again. I think it will be good for SOTA exchanges, but it was pretty tough to have a longer QSO due to how few characters the screen can display!

I’m going to try an activation this Saturday, both RTTY and FT8 if I can swing it. Going to practice tonight in the shack. Three questions: 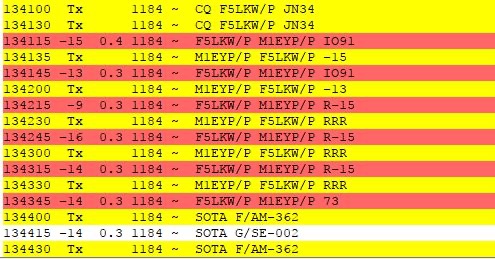 Sorry, but I do not work LF of 70 MHz.
might pop out on the Thursday evening for some 2m FT8