I know that a few people here use datamodes for SOTA including JT65 and JT9.

In a recent update of WSJT-X (1.8) there is a new mode FT8. I tried it out at home on 20m and 6m and it works great on both. The QSO structure of FT8 is the same as JT65/9 qsos but the main difference is that the transmit/rcv segement is only 15 seconds opposed to 1 minute for JT65/JT9. A total qso time of 1 minute versus 4 minutes.

This results in decodes to about -20db rather than -26db but the gain is in shorter transmit/receive times which can overcome propagation issues such as qsb. Also if portable the amperage per qso would be lower giving obvious benefits for battery requirements.

Now for a question. Due to the fact I dont have any old PC’s lying around, I can’t gauge what the decode time is like on the processor, or to be more precise, what the decode time would be on some small portable intel device. On my i7 PC there is not much of a noticble difference in decode time, but considering its less than a second on JT9 its very hard to measure.

If anyone is interested or willing to try out FT8 there is lots of activity on 7.074, 14.074 and when conditions allow 50.313 on something slow. This would enable us to see if it was a suitable mode for SOTA using old/cheap equipment.

Lots of us now with fingers crossed for an Android app for FT8. Could demand a much more powerful Android phone though than the one I have currently. I’ve no interest in taking any device (laptop, tablet etc) additional to a mobile phone, out on activations.

Just in from a quick local activation of The Cloud G/SP-015.

You maybe would have had a 3rd on JT65 if I’d read your pre-planning alert earlier.

Currently seeing if I can get FT8 working with raspberry pi and FT817.

If you can get JT65 on an android phone, I’m sure FT8 will be relatively easy to implement (maybe).

I downloaded WSJT-x-1.8-rc1 and ran it back to back on a pair on low spec Windows tablets.

I setup both machines running alternate periods on FT8 and added a cheap headset to the USB sound card and lthe internal mic/speakers on the Linx.

Both machines happily decoded each other’s messages at the end of each period.

These low spec Atom machines run this and other WSJT modes with no problems. I think these may be the slowest x86 family chips on sale now.

Sounds like FT8 could be possible using cheap equipment,

I have it running on my Raspberry Pi3 now and that decodes well with signallink to the 817.

Hopefully as Tom mentioned, someone will port the protocol to Android.

Thanks for the test.

I picked up an 11.6" Acer Chromebook a few years back for about $120. After the Celeron processor and 2GB RAM started getting a little slow for browsing the internet with a bunch of tabs open, I got a better Chromebook and my old one became an Ubunutu (Linux) based system with all of my Amateur Radio programs. Runs fldigi and WSTJ-X just fine, and I’ve used it on a couple activations. Might be a little larger and heavier than a tablet (a whopping 2.75 pounds), but it has a real keyboard and the screen is protected when closed without the need for a case. Even has 2 real USB ports, so no adapters like you’d need for a tablet or smartphone.

It really comes down to your budget, weight/size restrictions, and technical abilities, but most modern systems should be able to run WSJT-X just fine. After all, most “cutting edge” Amateur Radio technologies are a decade or two behind the rest of the world.

someone will port the protocol to Android.

I think it’s a little more complex than just porting the source code across. We are doing some Android development at work where the source code was available. In the end it was easiest to simply rewrite the software from scratch.

After all, most “cutting edge” Amateur Radio technologies are a decade or two behind the rest of the world.

That being said, the careful matching of the WSJT suite of modes to the rather specific channel characteristics is novel. Obviously that has been done for decades in the professional sphere but not for these requirements as there is little commercial interest in doing what we do. That was the main reason that we got “shortwave” at all back in the day - no commercial interest.

That was the main reason that we got “shortwave” at all back in the day - no commercial interest.

…and they are now falling over themselves to snaffle our microwave bands (aided and abetted by the regulator!)
Grumpy - me?

I’ve been running tests in the last few days on Linx 8 (Atom Z3735 quad-core @ 1.83GHz, 1GB RAM, 1280x800 8" display, 377 grams, running Windows 10) + Yaesu FT-817nd. I’ve modded the FT-817 to trigger VOX from the data input on the back so it only needs a simple audio cable from the audio jack to the data port, the whole package is very portable. The tablet’s CPU power seems to be enough, it manages to decode before the next cycle starts.

The audio chipset on the Linx 8 is locked at the 44kHz/16bit setting but WSJT-X 1.8.0 RC1 seems to be running fine (decoding 3-4 US stations per cycle last night). I will look for a newer audio driver tonight anyway and even try the PC, just to make sure I’m not missing decodes because of this. Andy, do you remember where the 48kHz requirement is mentioned ?

I got the requirement from the WSJT docs. This quote is from the online docs at Joe Taylor’s K1JT web page (but it is for 1WSJT-X 1.6)

"WSJT-X expects your sound card to do its raw sampling at 48000 Hz. To ensure that this will be so when running under recent versions of Windows, open the system’s Sound control panel and select in turn the Recording and Playback tabs. Click on Properties, then Advanced, and select 16 bit, 48000 Hz (DVD Quality). "

As I said, I think the drivers in Win10 for the Linx1010 have been updated as it now offers 44100 and 48000 rates and I’d put money on the fact it never used to do so! The Linx8 is the same hardware as the Linx1010 apart from the screen IIRC so it could be just a driver issue. It would be good to know if there is a better driver but the fact it works is nice to know. There were plenty of Linx8 on eBay when I looked at good prices.

The SYBA SD-AUD20101 is an inexpensive USB audio interface with good performance. It runs around $12 in the US. It goes up to 96 kHz. 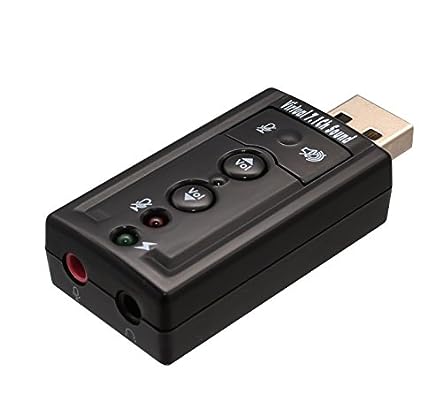 The USB audio dongle is an easy way to instantly add a headphone and a microphone jack to almost any USB-enabled PC or laptop. Featuring a black mini shell with a clean, compact design. The Syba SD-AU ...

Sound card on the Linx 8 is 48kHz/16bit now with the latest drivers, so no external USB card needed. The CPU handles decoding comfortably, it only spikes to 50-60% for less than 2 seconds. I am a bit worried that sometimes I see considerably more traces on the spectrum than decodes … not much I can do about it I guess. 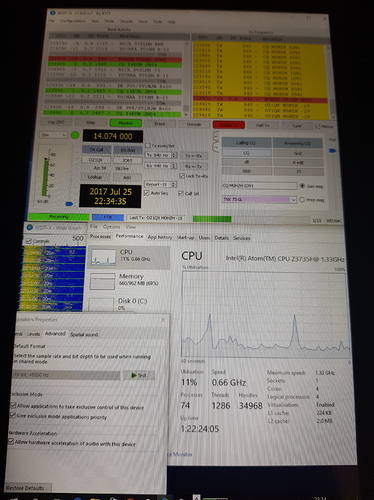 Not too happy about the QSO rate, even if I get 10+ reports per TX cycle (testing 50W in a vertical,

) and the band is busy there aren’t many takers for my UK call.

More traces and less decodes might be a frequency stability issue with your rig.

Do you suppose a Lynx would be up to running SDRuno?

Not too happy about the QSO rate, even if I get 10+ reports per TX cycle (testing 50W in a vertical,

) and the band is busy there aren’t many takers for my UK call.

I am amazed that you say this, Razvan. In the first week on FT8 (22 July - 29 July) I have made 450 QSOs, including more than 40 on the 60m band. Are there perhaps stations replying to your CQ calls that you can’t decode?

Do you suppose a Lynx would be up to running SDRuno?

) but there was enough to install SDR#.

This old link shows it running SDR# with a USB DVB-T dongle:

SDR# running wideband FM demodulation on BBC R3. You can see the DVB-T dongle to the left, it was about £7. The images show the spectrum analyser view, underneath the demod waterfall, bottom left is the IF view and bottom right the stereo multiplex view (spot the 19kHz FM stereo subscarrier). Uses about 65% of the CPU processing power. Viable as a field SDR unit. [image]

So I think it may well be fine. You can pick up keyboard-less 10in Linx units (reconditioned) for about £80 on a “well known Internet marketplace”.

I usually keep an eye on the waterfall, just to know if I need to prepare for a reply (that’s a JT65 habit). Not much to see there.

But i do have quite a high RX noise level on my backyard vertical, so there might be replies completely buried in the noise. I’ll take the setup out for a field test this week to G/CE-005, see if it’s better.

Good idea, Razvan. I’ll give you a call if I see you on the waterfall. I am fortunate to have a fairly low noise level at my home QTH, except on 160m.