In late 2018, I got excited about SOTA and wanted to activate my first summit. I also thought it would be neat to activate a summit for the first time. (-: After a few failed attempts due to summits access issues, being newer to hiking, getting turned turned around on mountain roads and needing help, etc. )-: I finally chose a very popular local summit…had a great experience…learned much…and got hooked on SOTA.

Purpose of this video is to encourage anyone new to SOTA to try a popular & easier summit for their first activation. This will help the new activator have a great experience, and focus on the radio equipment and aspects to start. For someone newer to SOTA, I share how to use the SOTLAS filter to identify which summits have been activated more often and give a few local W7W ideas. 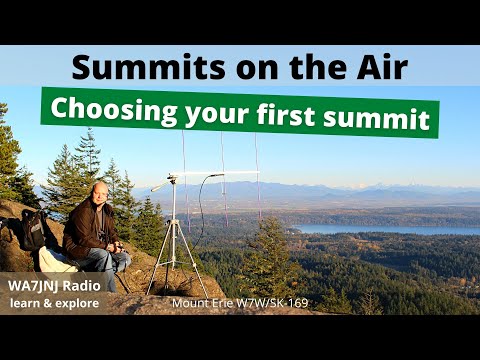 Very nicely done. We should all view this video and encourage our newbies to view it too.

I support your suggestion of activating some easy summits first to shake down the radio, battery and antenna parts of the activation kit. Using SOTL.AS to find the popular summits in your area is a great idea.

I’ve seen a few people announce their first activation but decide to activate a summit that nobody has activated before, to prove something I guess. But most of those people don’t return to SOTA for some reason. Maybe it’s too easy for them, ok, but maybe it’s the other outcome. A hike that looks like an hour on the map but turns into 5 hours each way? Or a hike that doesn’t turn into an activation because a crucial bit of the kit was left home, or broke, or they didn’t realise they would need (like an adaptor between coax connector types). SOTA isn’t a mountaineering competition but it sometimes does require some experience of walking and surviving in bushland.

Thank you Andrew, and great comments! Great idea about encouraging new activators going with someone else, and I’ve seen some of the W7O activators invite “tag-alongs” as a way to mentor, etc. It helps take some of the stress off a new activator, and great to have a friendly SOTA activator to answer questions, etc. S2S parties can be an opportunity to invite new people to a specific summit(s) and have people there to help. Something to consider further, about how to providing opportunities for newer activators meet with those more experienced… either as “tag-along” alert notices, or more organized events within an association. 73, James WA7JNJ

I find the activation reports, tracks and short helpful comments on the individual summit pages very useful when it comes to finding potential summits to activate. Parking, best route for access, what to expect etc, - things that might not be obvious from studying the map. The more summits that have that sort of information available, the easier it becomes for everyone.