I started to write this while I was receiving my second chemo out of the six planned in this series of treatment at the hospital and I have editted it once back home to add some images and give precisions on date/time of the QSO and other details I didn’t remember while I was still in the hospital.

Three days ago, on January 15th, I chased Herbert @OE9HRV through backscatter while he was operating on 15m SSB from the summit OE/VB-488.

I saw one of his spots on SW3 and went to the frequency trying to copy him on my tribander yagi pointing directly to him (about 55-60° NorthEast). For a brief moment I copied him very, very weak and my calls were not heard. Then the QSB made his signals vanish completely, so I left the frequency looking for a NorthAmerican activator just spotted on SW3 on 20m

for which I turned my tribander yagi from the 55-60° (NorthEast) where I tried to chase Herbert on 15m to 293° (NorthWest) for North-America. I didn’t copy the North-American, so I QSYed back to Herbert’s frequency on 15m expecting the QSB to bring his signals back again, but I then found that I was copying him very well but with my antenna was still beaming to North-America. I turned my yagi back to the 56° NorthEast and found that Herbert signals were not copiable, so I turned my yagi back to 293° (NorthWest) to receive again perfect good signals from Herbert. I called him, he picked me up and we completed our QSO at 14h48 utc.

This was a known effect for me, which I had several times experienced before when I was living in EA4 (Central Spain) between 2006 and 2012 and wanted to work stations in EA3 (NorthEast of Spain), particularly during EA contests with my yagi beaming to North-America (NorthWest). [edit: I have even experienced the same effect of copying EA3 while beaming NorthWest from my current QTH in EA2]. But this was the first time for me working European stations to the NorthEast of me this way.
It’s clear there must be some sort of ionized region somewhere above in the middle of the North Atlantic Ocean making this possible. 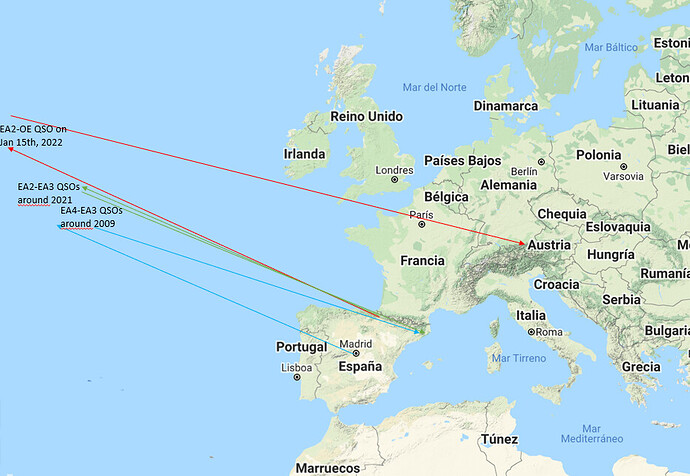 I think I’m going to look for this type of backscatter propagation more often from now on when EU stations to my NorthEast can’t be copied beaming NE.
I hope you’ll find it interesting and I’d like to hear of similar experiences you may have had with backscatter or similar.

Over the last ten years I’ve managed plenty of backscatter contacts , mainly when beaming west , calling stateside and getting 5/9 plus contacts with stations to my south and east
Many think they are coming in on the back of my beam but they are actually reflecting back into the front , this can soon be confirmed when I turn the beam in their direction and can hardly hear them

Difficult to say, how it really works at the end, at least for me. If it’s on a higher band, it could be sporadic-E, but maybe another propagation, I’m not aware of, could be also the reason for this backscatter.

When I was in EA3 over the Christmas holidays, I had also a new propagation experience.
On 15m @F4WBN called me, but he had a very strong echo with a pretty long delay. He told me that he pointed his yagi to South America, which was really not to my direction. So my only conclusion was that (at least) his signal travelled around the earth. And because he was only 286km away of me, and has a very good station, I could also hear him weakly over ground wave (or plane scatter), which was the reason for this strong echo. In this case, a backscatter over the Atlantic would not produce such a long delay, I guess.

Is this a sort of “horizontal NVIS”?

What I mean is a signal travelling in a skip (horizontally) is turned through 180°.

It must be due to some odd weather condition where the normal rules of refraction operate in reverse.

Backscatter is fairly common on the higher bands like 6 meters.
It’s quite interesting to work someone outside “local” range with your
beam pointed in some non-direct path, and having a good signal, especially if you are both pointed towards the reflective layer. (Aurora propagation
is another example of this).

his signal travelled around the earth

In 2013/14 round the world echoes were common on many of the 12m CW contacts I had during the 12m Challenge. On a few occasions there were so many round the world echoes (5 or more revolutions) that I couldn’t copy any of the CW and SSB was a struggle. This Sunday there was a station on 18MHz that was multipathing and a definitely echo-like sound. Well more like reverb than an echo, you couldn’t hear multiple dots but it sound like you were in a large hall or auditorium.

to some odd weather condition

HF propagation is not primarily weather related, it’s not troposheric propagation but ionospheric.propagation. This long document may help you with ionospheric backscatter. (n.b. it’s long and there’s lots to absorb). HF Backscatter off Travelling Ionospheric Disturbances Identified with Pactor-II

Since Ed @DD5LP wrote this in the Propagation report thread (Propagation Report. - #2 by DD5LP)
“This weekend however with have a large CME arrived from the Sun and the K Index here is already at 5 (storm level) and will likely stay that high until late tomorrow (Sunday).”

I’ve found this to be the most likely reason for the backscatter event I found on Jan 15th, particularly after reading the following on the document shared by Andy:

And this final paragraph at the end of the document:

“Finally, a recent correlation of backscatter observed with Pactor-II on 17-Nov-2003 to the SuperDARN derived auroral convection currents suggests that the ion clouds causing communications capable backscatter originate within the auroral ovals. On this date, there was a geomagnetic disturbance that allowed some of the auroral convection currents to escape equatorwards after there was a sudden shift in the geomagnetic field. When the geomagnetic field momentarily decreases, Faraday’s Law predicts a radial electric field that in turn induces an impulse driving some of the auroral charge equatorwards. Interestingly, combining this finding to the recent confirmation of synchronized conjugate auroras22 further explains the etiology of other interesting communications phenomenon including transequatorial spread-F (TE) discovered in 19471 emphasizing the usefulness of this propagation research.”

Hi Guru,
As mentioned, many fine contacts are made by side and backscatter off intensely ionised regions in the E layer. Not just 6 m but all the way down to 40 m where I believe backscatter Es gives occasionally strong but short-lived signals on unexpected paths.

For 21 MHz and higher you probably need to be 400 km or more away from the hotspot and can expect contacts out to 1,500 over your shoulder from your qth on the higher bands. This is based on an estimated useful 1,800 km max range to the hot spot.

It’s always interesting when Es are about.

Hi,
One can see regularly SOTA activations on 2m.
I wonder if anyone ever tried on purpose (not accidently) 2m SOTA activation under special 2m DX conditions, especially tropo. Does tropo: temperature inversion happen more on summits compared to lowland? As tropo can last many hours and even days 2m tropo SOTA activation would be an option especially in autumn.

Guru I hope you can manage with chemo side effects, wish you strength.
73 Patrick ON4BCA

It’s often possible to be above the inversion on a summit and see no DX.

It’s often possible to be above the inversion on a summit and see no DX.

Yes, I’ve experienced that, too.