Can of Egg Rum

Or rather, Canna Eigg Rùm.

I had a window of opportunity of one week to head off with my backpack, tent and radio. Scotland is my first place to start planning. However, I was without a car for the trip, it had to be possible by train. I had some plans but at the last minute decided there was still too much snow on the high hills for an enjoyable backpacking trip. So I focused my attention to a trip based around the (to me) mystical Rum Cuillin traverse.

I spent all of Saturday in the train and finally arrived Mallaig at 6pm. I headed straight to the hills for a night camping at the loch below GM/WS-288.

Quick breakfast and up to GM/WS-288. I did a full kit shakedown before I left, however, on a trip like this I am anxious before the first activation. It was great to work through the chasers on 30m (I was in my bothy bag and there was a snow shower outside) and open my account for the trip. I was in good spirits and it didn’t seem to take long to be back on 30m on GM/WS-320. 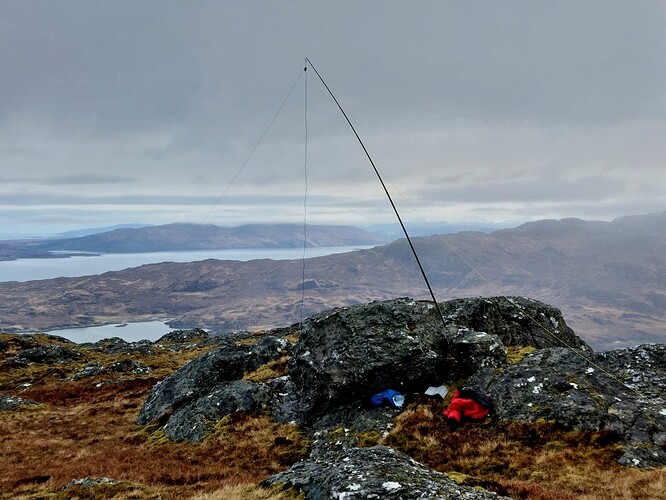 I had a ferry to catch at lunchtime so I headed down, packed up my tent and aimed back towards Mallaig.

I arrived on Eigg at 1545 and headed for the opposite end of the island on foot. Watching golden eagles kept me occupied on the walk. I wasn’t expecting much from GM/SI-134 but I found it a really enjoyable ascent and activation. 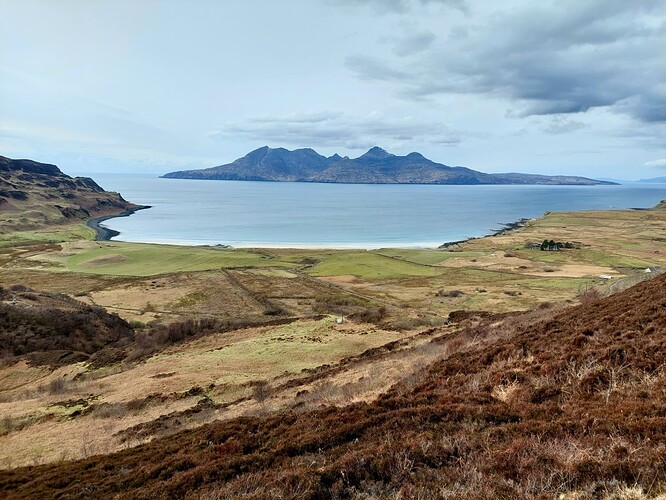 My top 5 summit activation experiences is ever changing, but I think this one might make it in. It felt like a bit of a slog back to the south end of the island to setup camp for the night listening to the ringed plovers outside my tent on the beach. 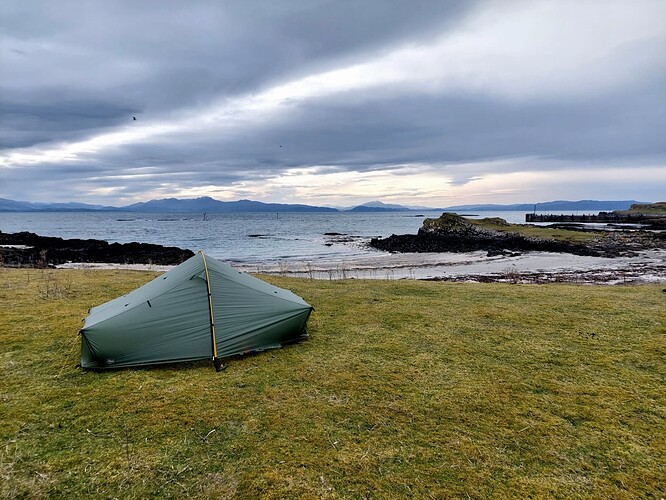 Another time-window to grab a summit before a lunchtime ferry. GM/SI-114 is an impressive feature and a fun easy scramble up to the summit. 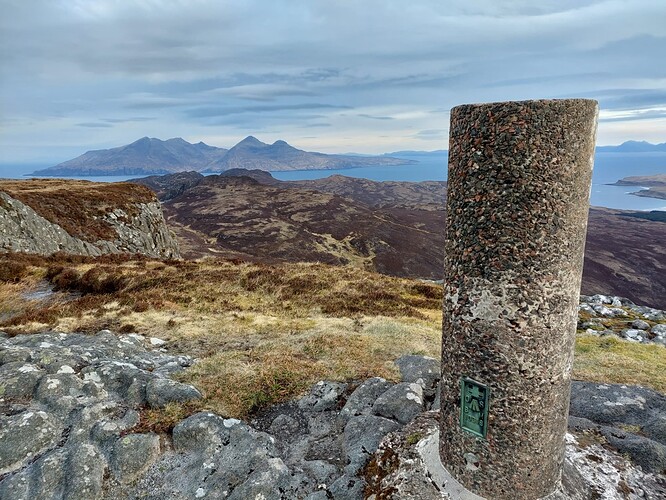 Unfortunately, it was windy and a rain shower came through as I was setting up my antenna, so a bothy bag activation.

I was on Rum by 12:50 and decided to pitch my tent at the Rum campsite on the beach next to the bunkhouse. I was quickly heading off for GM/SI-050. A bike would help with this summit and the ferries are very accommodating with bikes. Unfortunately, Easter weekend rail works meant bus replacements for my journey home, with no bikes allowed on the buses. It is a gravel road to here (OpenTopoMap - Topographische Karten aus OpenStreetMap) then there is a plastic underlay installed on a grass track to the lochain. You could probably cycle all the way to the lochain. I could only dream of bikes on this trip. By the time I reached the summit of Orval, the wind was so strong I was struggling to stand up, occasional rain showers were blowing through too. It felt like there was a good chance I could snap my pole. I decided to install it on the leeward side of the cairn poking out around 30 degrees to the ground. The feedpoint was probably around 2 m agl. Thankfully, it all worked and I was pleased to hear @g4obk after my first CQ.

A (relative) rest day on GM/SI-147. Very enjoyable sitting in the lunchtime sun with no wind and no rush to be anywhere. I was a little disappointed to only work 13 chasers from this summit. I could have stayed there for hours, but the callers dried up. 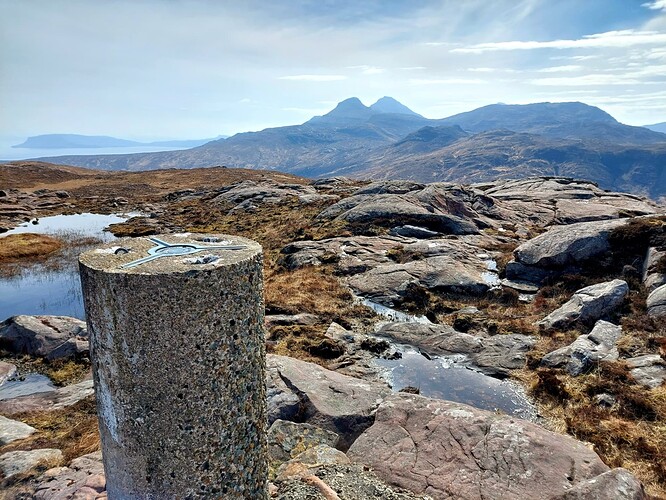 This was the day for the main objective, the Rum Cuillin traverse. I wasn’t really too sure what to expect from this all, I had read about it was this Rum Cuillin traverse (Walkhighlands). I did a day traverse of the (Skye) Cuillin ridge ten years ago and this was technical and a reasonable effort. I had little idea how this would compare. So I set off from a 05:30 alarm not quite sure what to expect. The weather was drizzle and summits were in the cloud. Climbing up to Hallival I encountered the first of many manx shearwater burrows. As I climbed past the burrows the shearwaters make a screeching noise. As a result of this noise, apparently the Vikings thought the island was infested with trolls when they came to Rum. Occasionally in the mist I would hear a stag making what sounds like a deep coughing sound. With just me, these animals making all sorts of noises and atmospheric ridge lines in the mist, it all felt very wild.

There is a bit of scrambling and route finding up to GM/SI-009. One must approach this in the mindset that the nearest mountain rescue is on the mainland. The summit trig on GM/SI-009 had a near perfect hole in the top for my pole, I’ve not encountered many trigs as amenable.

I carefully wound my way over to GM/SI-033. A nice exposed summit and on the ascent the weather cleared up. 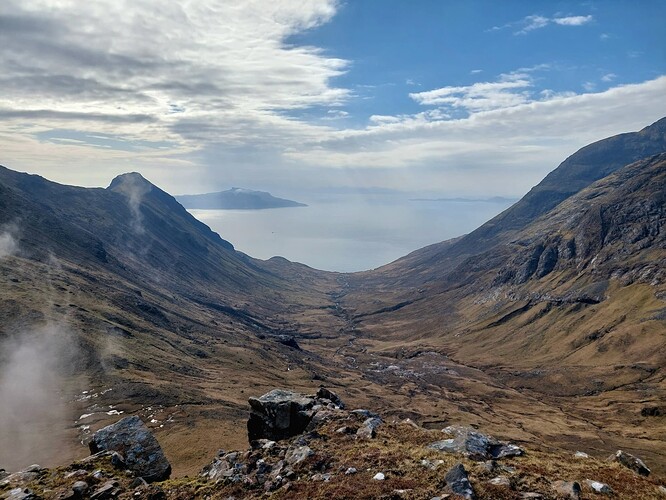 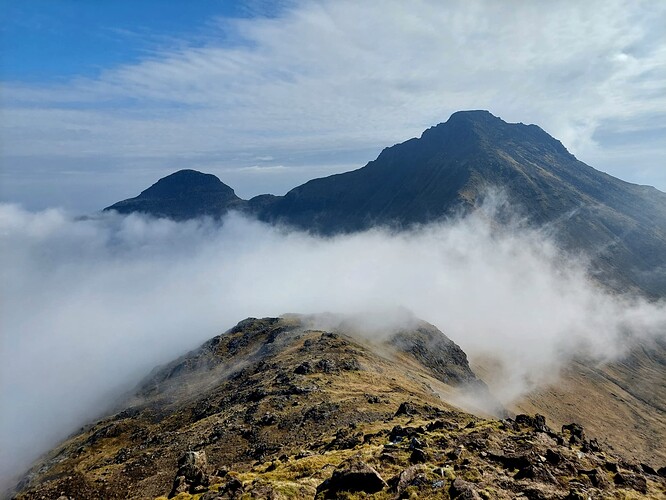 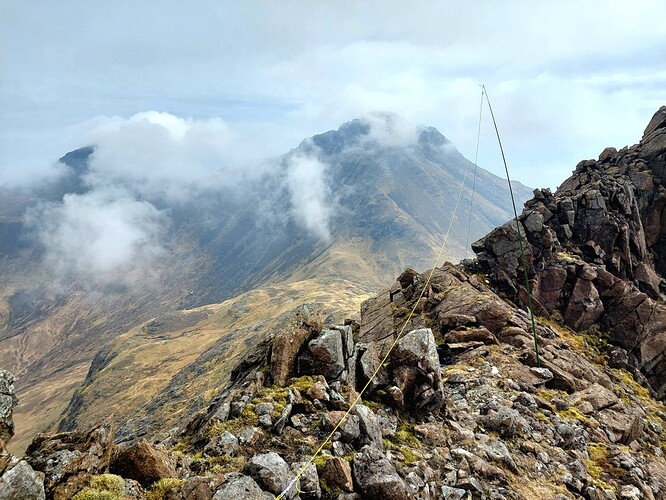 A great mountain day out. Nothing near as technical or enduring as the Skye Cuillin ridge, but a great island adventure.

Ferry timetables around the island are a little complex. It feels like you need a computer algorithm to work out the most efficient week. I needed to wait until Friday afternoon for a ferry. So a SOTA rest day to go and dry some kit out by a bothy fire place below Bloodstone Hill in the Guirdill bothy. I think this bothy would make a great place to start or end an activation of Orval (GM/SI-050) from for a great expedition experience.

Back to the other side of the island to get the ferry to Canna. I wasn’t sure whether to go to Canna or head back to the mainland and go to Knoydart for a few days, but I was glad I went. Canna had a nice feel to it and I wish I had spent more than 15 hours there (and eaten at the sea food restaurant instead of dehydrated camp food).

Early morning alarm to get up, down, pack up my tent and get a mid morning ferry back to the mainland. 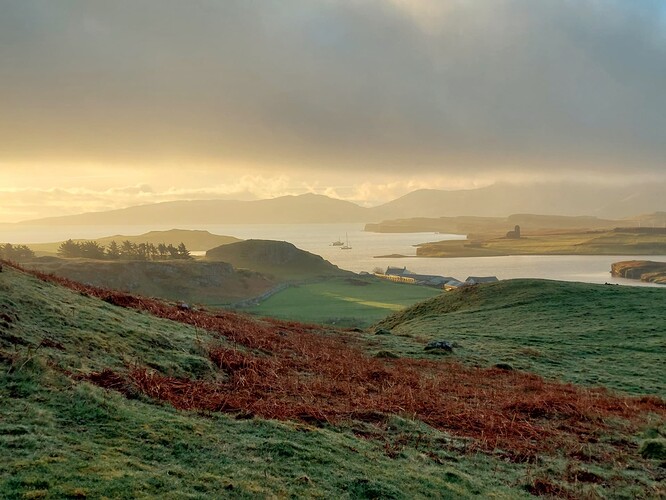 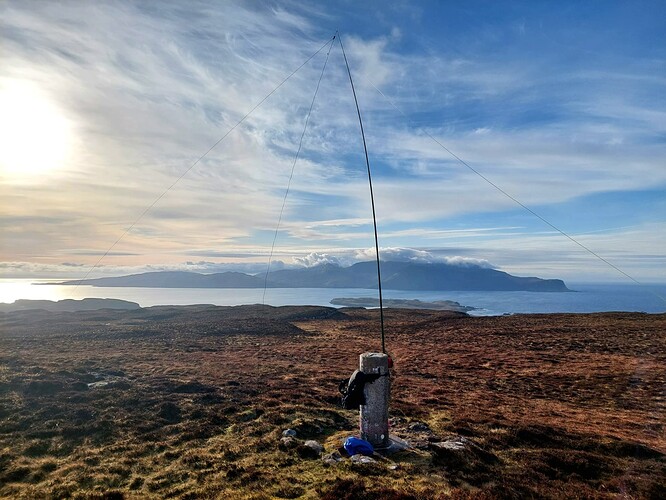 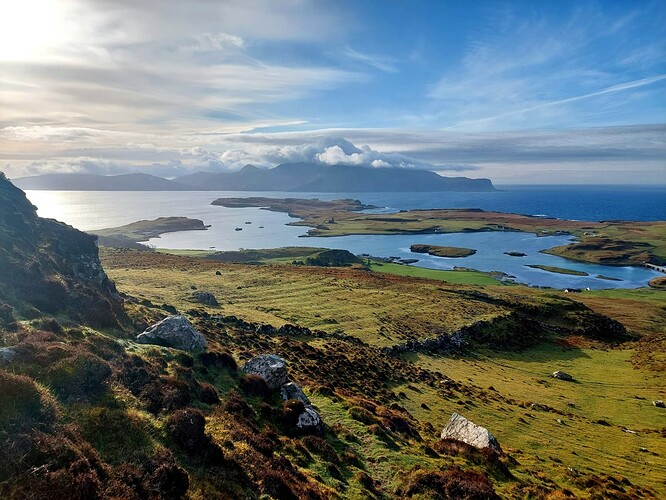 I had no idea what solar conditions were like during this trip, this summit felt like a struggle to work the normally strong signal chasers. Perhaps it was just that 30m hadn’t opened up yet?

My first night in a bed for 8 days in the Mallaig bunkhouse. I walked from Mallaig to Morar and then a rather unmemorable ascent and activation of GM/WS-345. I often use hill-bagging.co.uk to understand routes up and down Marilyns like this. This one had some advice not to ascend/descend from the Morar side. I foolishly read this and ignored it. I crawled (often hands and knees) through rhododendron bushes with my full rucksack for about a kilometer.

It was a long train journey home, but good to spend some time thinking about where I might spend a week next year…

All QSOs were on 30m CW. However, I enjoyed working what I presume were WAB chasers with G and GM callsigns from my various locations.

White-tailed (sea) eagles, golden eagles, stags, otters, desolate golden sandy beaches these islands are magic. The single downside, lots of ticks on Rum and I found them crawling in my tent, thankfully I escaped with no bites.

I keep my watch on zulu time for a trip like this. This is mostly for logging and checking if I am “on time” for summits. However, when tired/thirsty doing the adjustment to normal time for ferry timetables and figuring out if it is GM or GA for my chasers in EU (add +2 hours!) made me question my approach for this trip!

I share a story like this in the hope that it inspires someone to step outside of their norm and head off to do something similar within (or just outside) their own comfort zone. I also hope it gives the chasers the view from the other side of the key.

Looks brilliant, thanks for the report. Lots of ticks on Mull (or more specifically probably Ulva) too…

Crikey! What an adventure! Your tale is certainly inspiring. I love the Scottish Islands, it’s probably from my childhood visits to Coll when I was young. Apparently I was named after the Isle of Coll. I was curious a few years ago and wanted to go back after about 30 years away. I had a wonderful few days exploring the island on my bike. I had the idea to scratch the itch, however Coll is calling once again, I’m trying to ignore her! 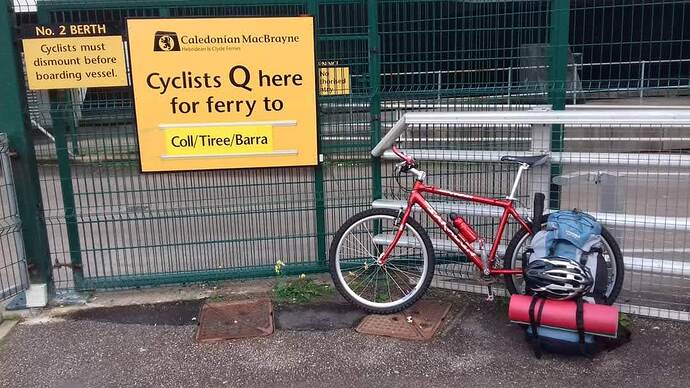 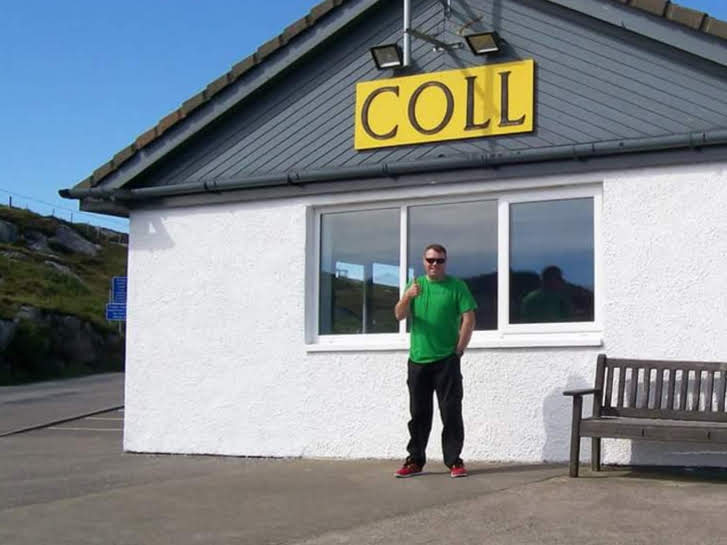 I took an MTR with me on my trip but similarly there was a solar upset and propagation wasn’t so good.

Thanks for the report, really makes me want to go!

Wow…… what a schedule and what a report…… the views of the Canna activation are stunning!

Matthew,
Thanks for sharing this. I sit here wondering if there might be a shower in the next hour and whether I should go for my constitutional walk. I recall being outdoors when it drizzled for hours and the rain ran out of my overflowing boots. Clearly I’ve gotten soft. You have inspired me to get off my butt. Thanks.

Great activation reports from these beautiful islands which were my backdrop when I worked in Mallaig. Well done. More encouragement for me to get my CW up to workable standard! Haste ye back. 73 Mike

what a beautiful scenery, i definitely want to go there or other Hebrides Islands someday again, i was there with my wife and bicycles, years ago! I am happy that i made it into your log on two summits.
Congratulations on your success and doing this all by feet and public transport !
Hope to meet you again from Scotland.

Matthew,
Thanks for posting such a great account. Stunning scenery and well done on the radio side too.
I will another few lines to the “places I really must get to” list.