Since my attempt to activate my first 4-point SOTA summit (Datung Mountain) on June 5 was thwarted, I had to find another one to try. It became Dongyan Mountain (BV/TA-008), or East Eye mountain, located in the national park of the same name. Knowing that this is a very popular one-day family outing and that the daytime temperature would go up to 36 degrees Celsius I decided to head out early on July 17th: 6 a.m to be precise. After some 50 minutes on my trusty 125 cc Sanyang scooter I arrived with the gates still closed and the first bunch of people already lined up to buy tickets. Yes, this was the first time I had to pay to get on a mountain: US$3.35 to get into the park and because I put my scooter outside the gate I saved the extra 65 cents parking fee. You might call me stingy, but it was only a short walk to the visitors center and the parking lot in the park itself was not far from the entrance at all, so why not get the extra exercise? 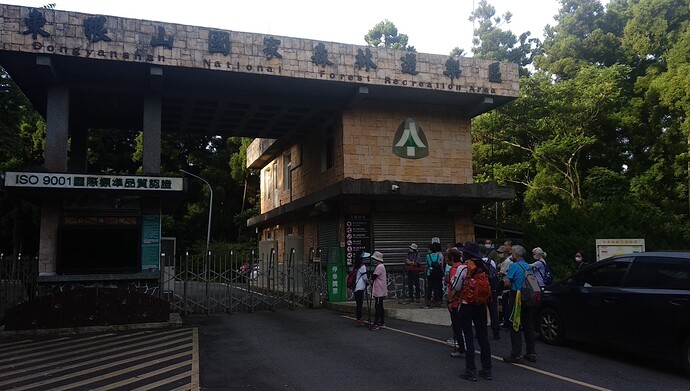 When I arrived at the visitors center it was already 27 degrees Celsius, with 77% humidity, the UV index still 0 and at 913 meters elevation I had to go up 300 meters to the top. 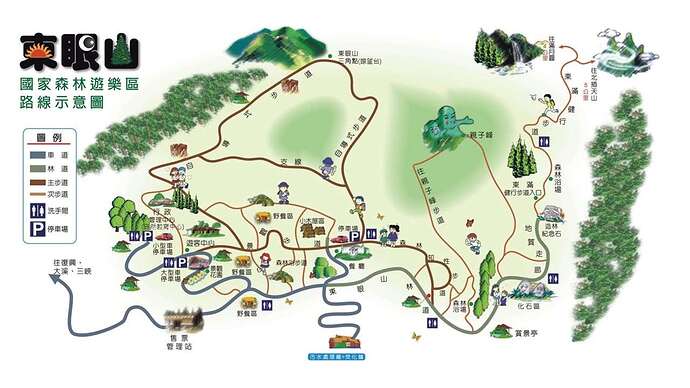 I chose to walk the circular route, clockwise, so I first took the path on the upper left to the green dot at the top. The entrance was here and it said a 1770m to go to the top. 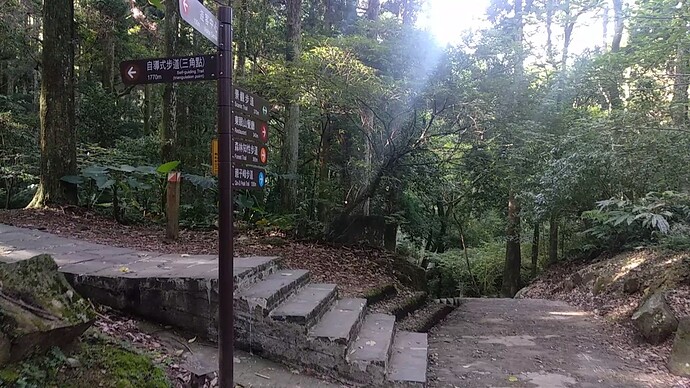 I had started a new alternative treatment for my chronic sinusitis earlier in the week and the effects were noticeable because I felt great. From what I gathered from others the hike (1770 meters) up should take between 70 and 80 minutes, but with a steady, slow pace I did it in 56 minutes. Woohoo, no souring up my legs, no panting, no extended breaks: it was awesome! It did help that most of the way the path was paved, or had stairs and that helped in gaining some speed. 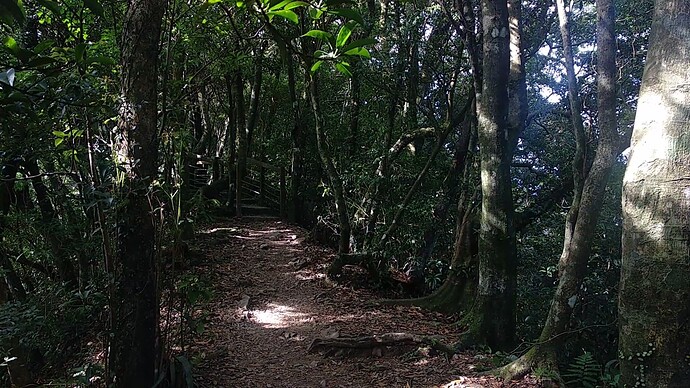 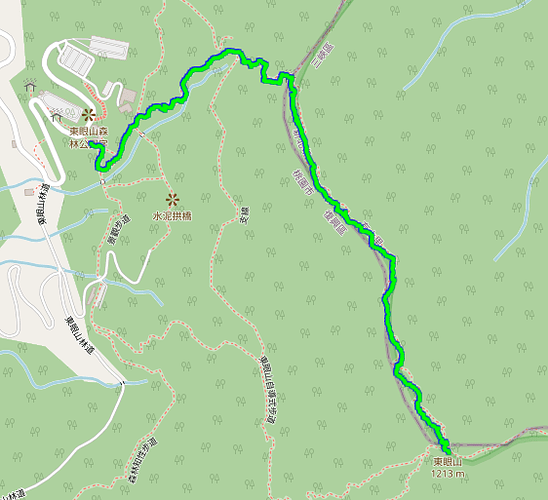 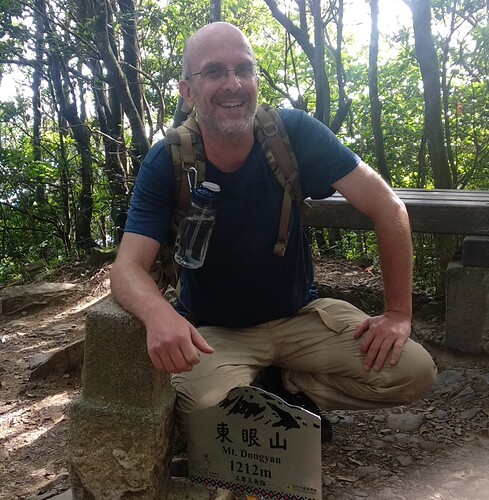 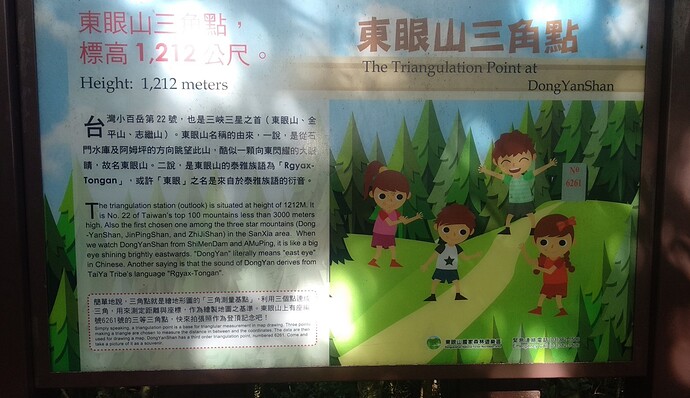 A quick look from the observation deck and I decided to go down in the activation zone a little, because - as is usual in Taiwan - the summit was very small. I found a bench close by, set up my gear and started calling CQ. No GSM coverage, so I couldn’t spot myself, but I guessed the regulars would find me anyway. I was wrong: nobody answered and when I started calling stations from Japan I could heard loud and clear, they never came back. Hmmm, maybe not such a good spot after all. So I packed up, climbed back up to the observation platform and set myself up in a corner so not to bother anyone. 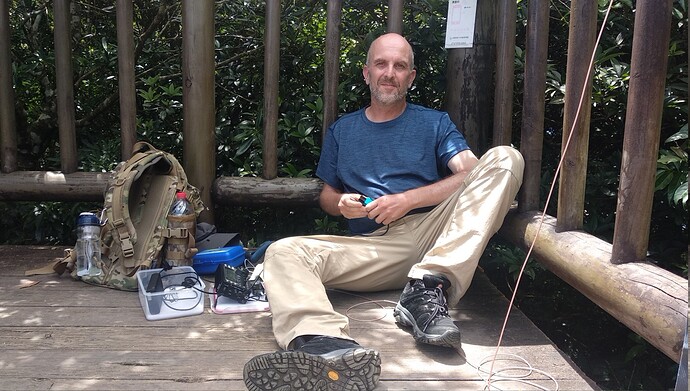 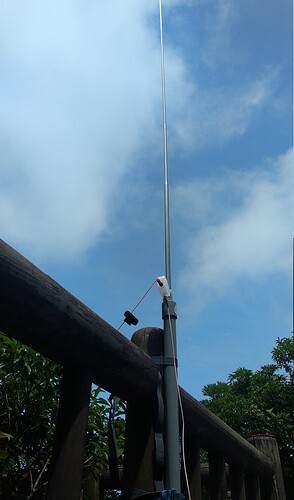 It did the trick and within half an hour I had 8 QSOs in the log: JH7IOT, 7N1FRE, JA1VRY, JH1MXV, VK5CZ, JH7XRG, JA9MJR, and ZL1TM, all in CW and all on 15 meters. There was one Chinese station who called me, but despite him being very strong he never came back to me. A pity, it would have been my first Chinese SOTA QSO. No SOTA snakes were seen this time, but a very big SOTA fly kept me company, quietly sitting on my leg and just refusing to leave when I nudged it off. 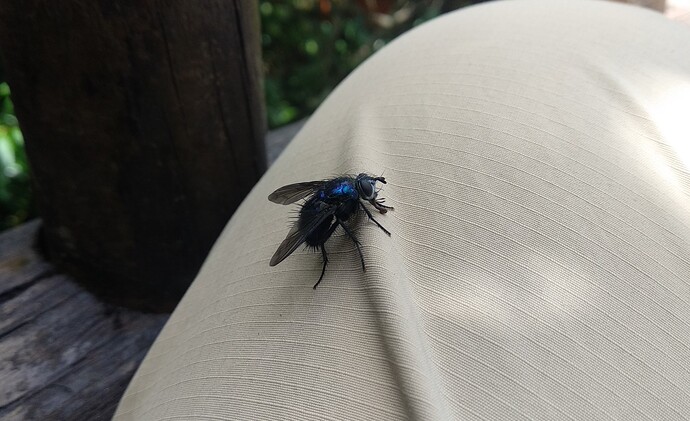 From the platform you had some nice views all the way to Taipei. It was a bit hazy, but you could faintly see Taipei 101 in the distance. 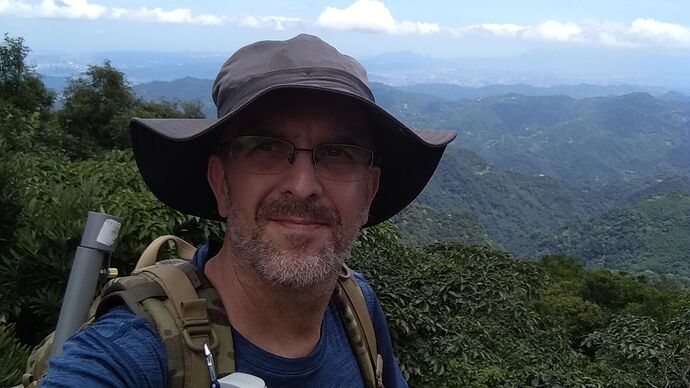 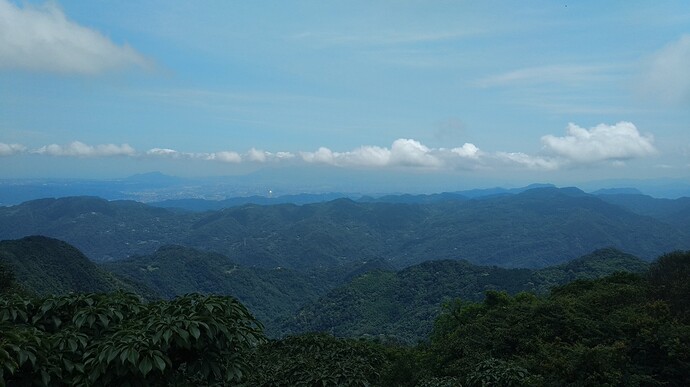 At 11 o’clock it already became so busy I decided to head down. With this much people at the top it’s not much fun. 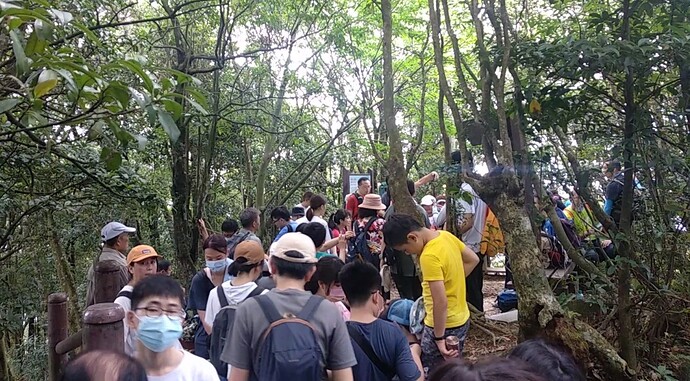 I went down the other part of the circular route, which was as easy to walk as the way up, but with a leisurely pace it took me 67 minutes. There were beautiful trees and some art work made with wood gathered from the forest. 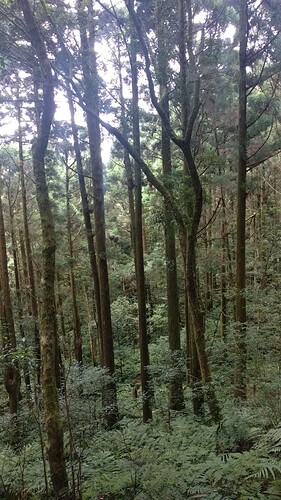 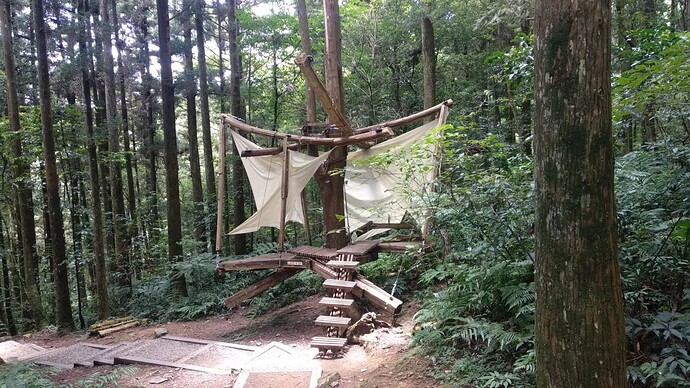 Back at the visitors center. A bit more crowded than when I was there at 07:30 a.m. 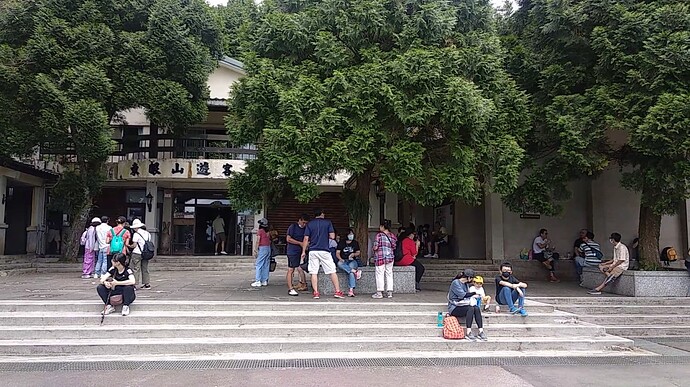 Back to the entrance and my bike then, with some beautiful flowers on the way. 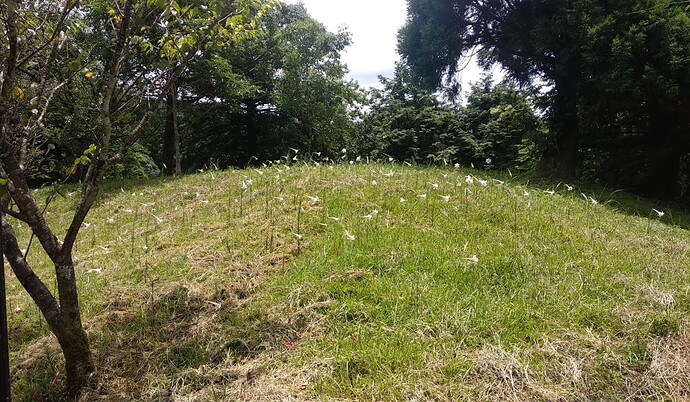 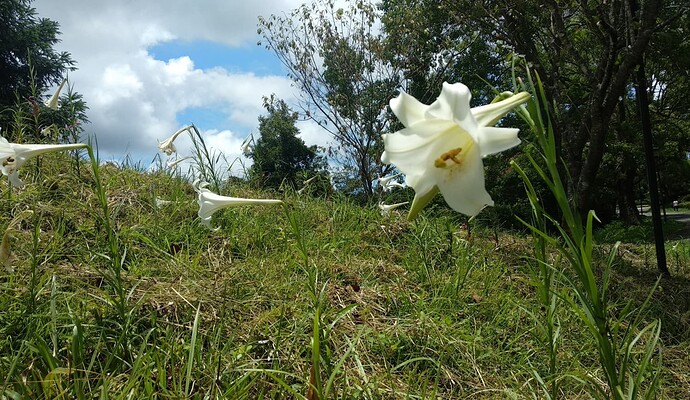 My scooter was still in the same place and the reason I rode it instead of driving became apparent very soon: slow traffic. Fuxing district is a very popular destination on the weekends, but there is only one two lane road, with many people parking at the side of it. So even riding a two-wheeler it was slow going, but I made it home safe and sound. 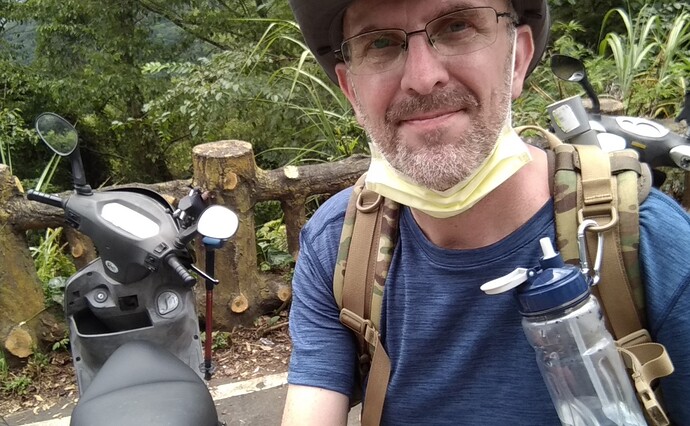 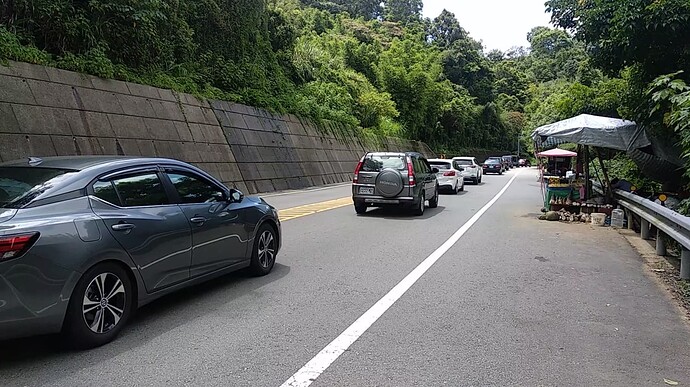 Hi Hans, thanks for sharing you report and photos. I really enjoy your reports.