In the 1940s, there was a popular British comedy programme on BBC radio in which a regular character was called “Mona Lott”, presumably because she did! This recollection made me smile as we set off in the early morning to climb the 749-metre Mona Gowan (GM/ES-034) above Strathdon in the Cairngorms National Park. My XYL, Ann, and even our YK9L, Sula, are well aware that I moan a lot as I painfully take to the hills once more after some time of illness-related inactivity. 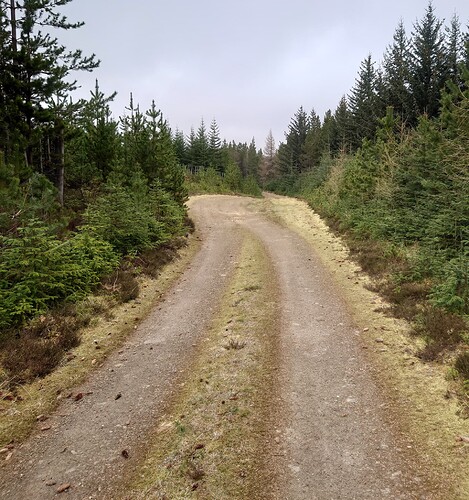 From the wee parking space on the minor road near Culfork cottage it’s a fine walk on Land Rover tracks all the way to the summit, initially through forest and then across open heather-clad grouse moor 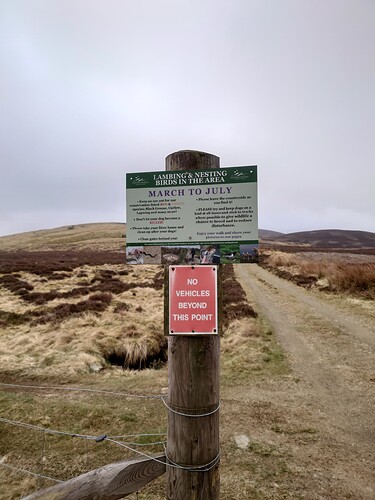 It’s not punishingly hard work going up so I didn’t have much to moan about - except the weather. Forecasts of blue skies and sunshine were in reality replaced by overcast cool conditions and thick mist shrouding Mona Gowan and all the surrounding summits. 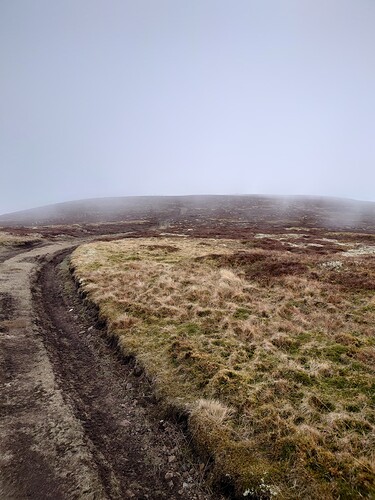 It took a little under two hours to reach the summit where visitors are greeted by a large cairn, erected to commemorate Queen Victoria’s Jubilee in 1887. The memorial stone is now very weathered but the date can still be seen. 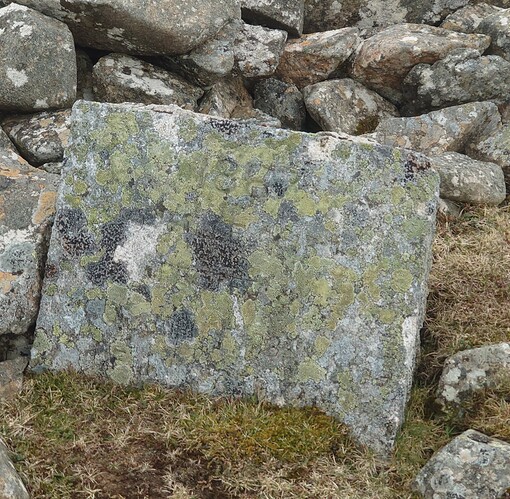 It was still misty with a chilly northerly breeze so the tarp tent went up to provide a sheltered operating position, despite the mist now clearing. There’s plenty of space on the summit. It was the usual set-up for me - KX2 running 10w to a W3EDP antenna on a 6m Sotabeams Tactical Mini pole. Seeing a 1:1 SWR on the meter (I fitted the internal tuner module to the KX2 last year) is always a welcome sight. 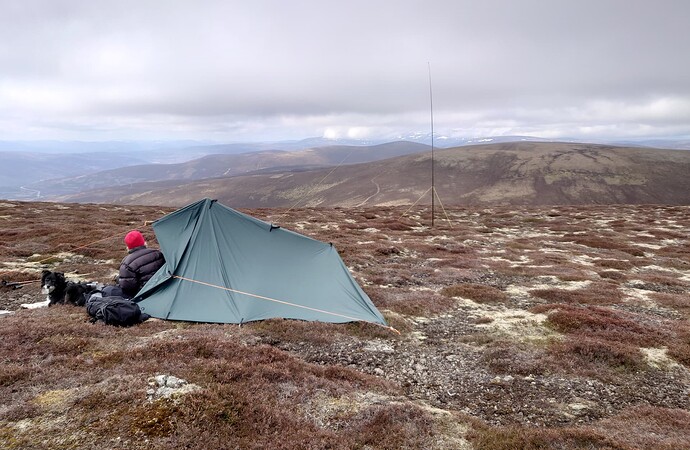 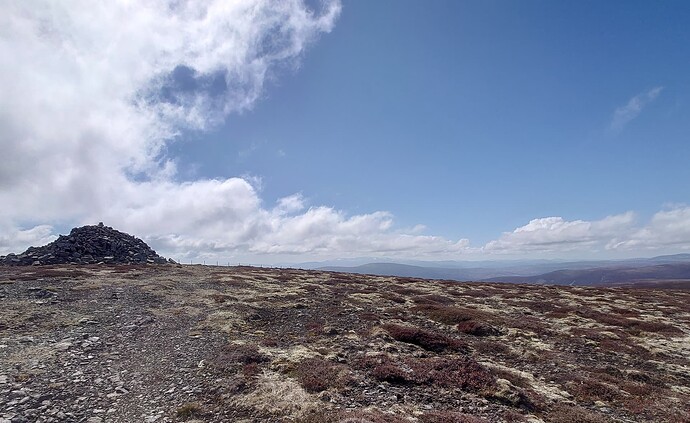 A spin round the bands suggested conditions were not that favourable but Andy, OE6ADE/P, was heard on 14.310 at 10:10z and a S2S was completed successfully.

Next, a CQ on 14.273 at 10:25z generated a flurry of calls from France, Spain, Czech Republic, Sweden and Slovenia. There was a total of eight QSOs, including a S2S with Germany, but the final QSO was to be the most significant of the day.

Whether it was tiredness from the walk up, discomfort from complaining knees and hips, chill in the fog-laden air or simply on-air nervousness as I get to grips with SOTA (I do moan a lot, as you can see), I committed an unforgiveable and inexplicable schoolboy error by repeatedly giving my callsign suffix as “Papa” rather than “Portable”, with no mention of “stroke” or “slash” before it. I have no idea why I did it. It’s out of character for me.

Following a QSO with Aleksander (@S57S) in Slovenia, he immediately called me back to alert me to my error and explain why it could be confusing for other chasers or activators.

I’m sure we’re all familiar with amateurs who moan a lot about everything and everyone on the air, but this advice was offered politely, positively and constructively and I was delighted to acknowledge it and take on board what was being said. I should know better, of course, but none of us are immune from mistakes and certainly never too old to learn from them.

I really appreciated the attitude of a fellow amateur taking time to correct me. That’s what this hobby is all about - constant learning from those who have more knowledge and experience. Thanks, Aleksander. Lesson learned.

Equally, apologies to any chasers or activators who heard me make a clown of myself with my confusing callsign. It won’t happen again.

I immediately took a break to stretch my legs and drink a warming coffee but when I returned, I heard no other S2S calls and didn’t feel up to making another CQ after my earlier misdemeanour. I called it a day. 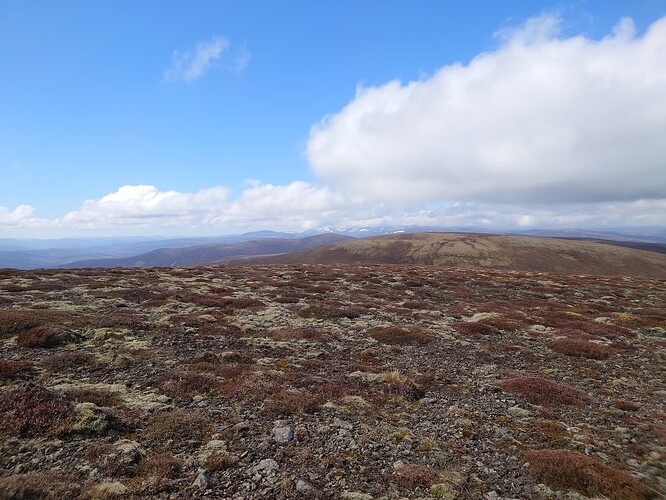 Thankfully, by now the mist was burning off and when we left the summit and got out of the chilling northerly breeze, it was pleasantly warm in the sunshine. Looking up to Mona Gowan from the path back down, the summit was now clear and offering excellent views across north-east Scotland in all directions. 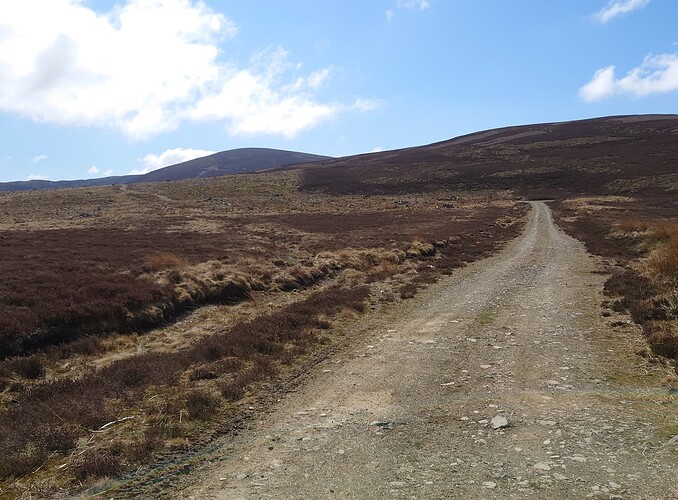 Back at the car in 90 minutes from the top it was a sunny, warm, settled and very pleasant afternoon in Strathdon. My 5th SOTA activation was complete after a delightful walk of just under 13k.

As we drove home I concluded that, despite everything, I really didn’t have a lot to moan about at all. 73 Mike

I like that sort of blogg - with a theme running through. You really didn’t do enough moaning.

That track looks like a bike would have been of use??

BTW… I wonder whether Terry Wogan had any people write to him with the name ‘Mona Lott’? (A new one for me). He sometimes got caught out by those names. I remember one letter he read out from north of the border; It was signed ‘Angus McCoatup’. He fell for that one.

I went to nursery/pre-school run by Tommy Handley’s sister some 57 years ago!

Thanks David. I will work on my moaning level for the next one…

There were plenty of mountain bike tracks on the path so it’s certainly do-able. Not for me, though - our Border Collie is no use balancing on the crossbar….!

“Can I do you now, sir….”
Thanks to BBC Radio for occasionally repeating these great shows for the benefit of those of us who missed them first time round (principally by not being born in time….)

As Mona would say, “it’s being so cheery what keeps me going.”

It was while activating Mona Gowan for the first time that I realised I cannot say about a third of the phonetic alphabet with a frozen face. For some reason ALFA comes out ALFO and BRAVO comes out BRAVA, which doesn’t help anyone understand a Scottish radio operator, when the accent is hard enough to grasp!

That’s hilarious. Just wish I could have used that reason to explain my stupidity yesterday. A mild spring day hardly compares with freezing winter bonus days! Strangely, as a native Scot I have no problems with our accents - it’s everyone else’s accents I sometimes have trouble with…

He thought I was joking, I’m just broken!

I think I once said trangia, wishful thinking for a cup of tea on a cold hilltop!

Maybe I need to learn morse…

You should hear (or maybe not) the mis-spellings and mispronunciations I perpetrate when practising my CW. A misplaced dah or dit can cause endless embarrassment bordering on potential legal action for on-air indecency! Frozen mouth or tongue-tied SSB is probably safer for now…!