The weather was unusuably hot weather at 27c. And as we were just out of ‘lockdown’, the hills were alive with walkers. I intended to be one of them.

I’d already been out and activated the 9 standards rigg, on my way over from my home a couple of days before, then Skiddaw & Great Mell Fell the previous day. I can’t remember ever visiting Blencathra before. I’m not sure it had much to offer a keen climber and mountaineer. I knew there were some attractions such as Sharp Edge a graded ‘scramble’, but there were always better things for me to do in the Lakes. But now my motivation was SOTA and Blencathra represented 8 points. Thats enough motivation for me now!

I parked at Threkeld along the old road above the A66.walking along the old road and then along the footpath until I accessed the fell side at at Scales. Inspite of the early hour, it was before 8utc, there were a few people already on their way up. I decided to go and tackle Sharp Edge on the way and saw no reason to slog up one of the steep ridges which face the A66. I had plenty of time. as it was relatively early. I soon saw an individual on his way down. It was only when he got nearer could I see he was completely naked, and was carrying his shorts. He quickly covered his wobbly bits when he noticed I had my camera at the ready, and I had to make do with a rear view shot. Probably just as well.

Sharp Edge proved easy enough and was pretty simple and hands were only needed to keep your balance.

A short while later I was sat in the lee of the wind well ahead of my alerted time. It had taken me 2.5 hrs to reach the summit. There were plenty of people wandering about and several people on mountain bikes too.

I looked at my phone and I had no signal, so I listened around the bands to see if another activator was calling CQ SOTA. No one! At 1020, well before my 1100 alert, I started calling CQ. on 7mhz. I was soon answered by EA2DT/Manuel and a new chaser for me, F2YT/Paul. And that was that!

Back to 10mhz and I soon got one answer. Then silence. I had no way of self spotting and i guessed that I wasn’t being picked up by the RBN either. Pounding the morse key was getting tedious. Almost at the point of giving up, Eric/F5JKK answered and said he’d spot me. A minute later and I had several callers and 15 minutes later I had another 10 QSOs including another 2 S2Ss. I’d got everyone in my log book I heard chase me. It was time to go.

I packed up and continued along the crest to Knowe Crag (804) and then descended to Blencathra Field centre and my van a short way beyond Threkeld.

You Kits HB-1b MkIII with a 2amp Lipo battery
A tiny Russian ‘spy key’, which is much better than many keys I’ve used.
An inverted linked dipole supported by the obligatory pole.

Paper log book and a couple of propelling pencils (are these called mechanical pencils in the USA?) 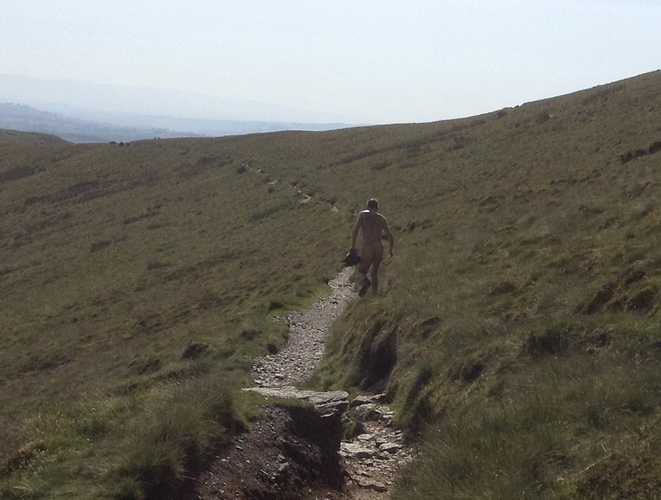 The approach to Sharp Edge 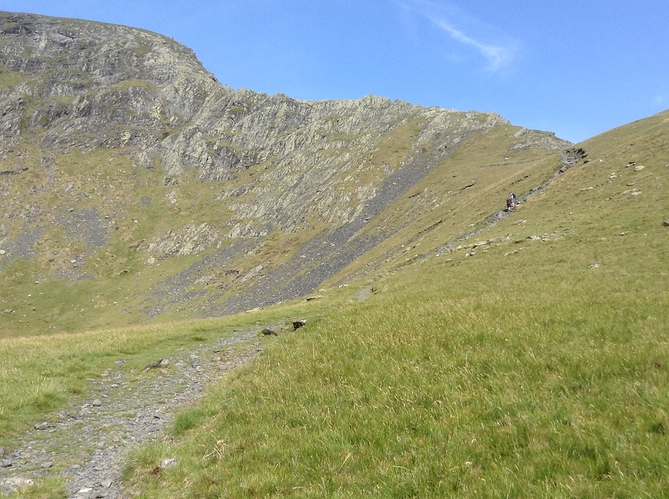 Looking down the ridge:- 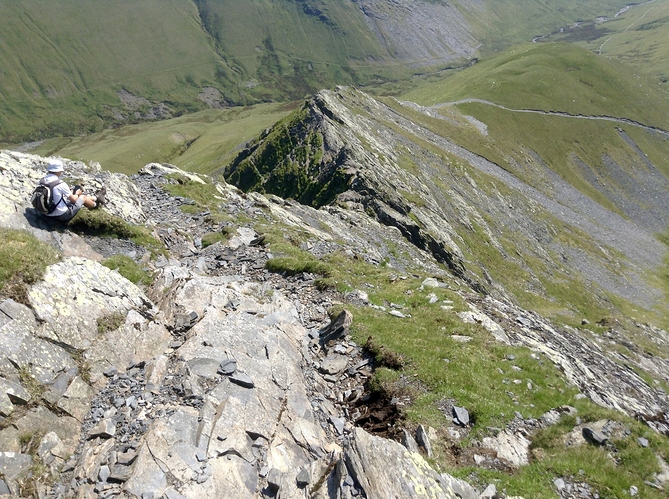 And below, some views along the crest. Much more dramatic than I thought. 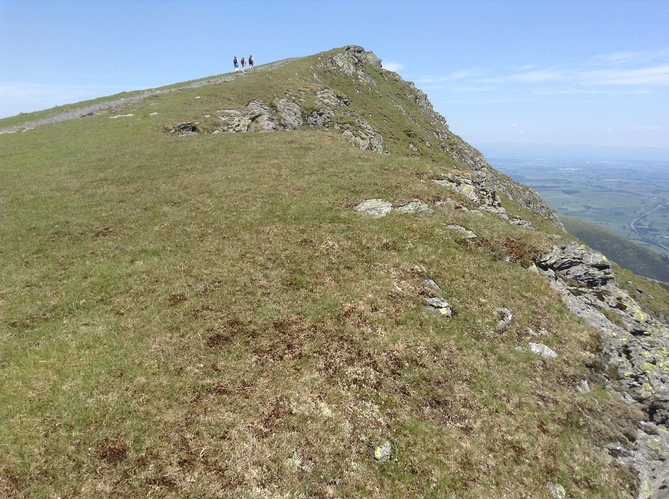 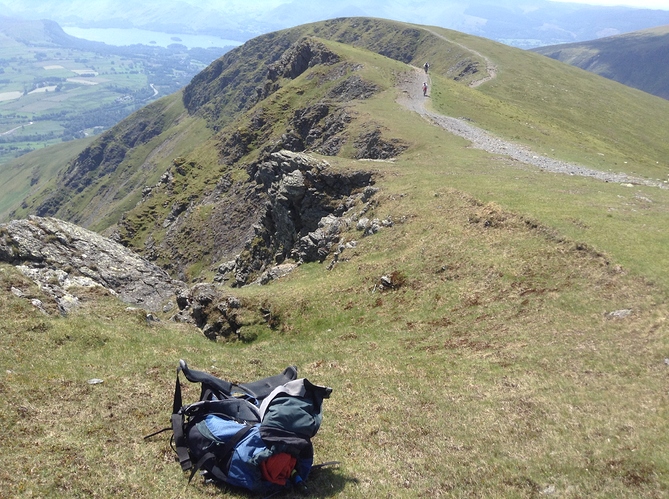 It was only when he got nearer could I see he was completely naked, and was carrying his shorts. He quickly covered his wobbly bits when he noticed I had my camera at the ready, and I had to make do with a rear view shot. Probably just as well.

Very good David. I had a similar experience walking Hadrians Wall (Not SOTA) on 14/10/2012 when the infamous Naked Rambler and former marine, (Stephen Gough Wikipedia) came up behind us. Quite a character and a really nice chap to talk to I found. He only wore clothes when he was inside his tent at night to keep warm he said. Wobbly exposed to all, he had walked from Edinburgh Prison that week after his release. Locked up for refusing to accept a lift from a Police Car when he was passing a school. Before and after that in and out of the England’s Magistrates Courts repeatedly and also convicted of Contempt of Court for not being prepared to clothe himself when he was before the bench.

What he did was not sexual, but a fixation to walk the length and breadth of our country naked and free.

Rear view also to save Brian the trouble of deletion! 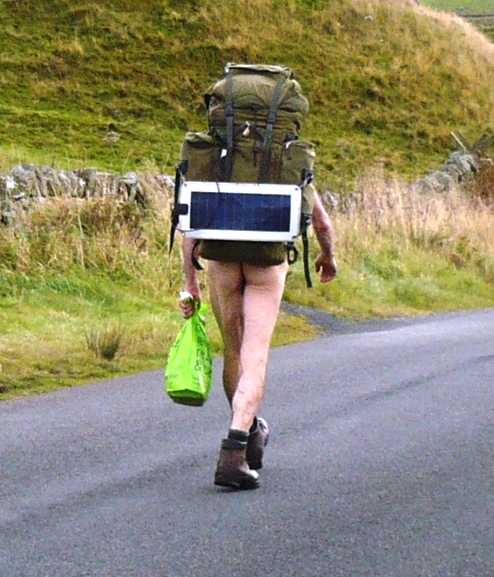 Those Russian Spy keys are very good I agree. Well done on your recent Lakeland SOTA Tour. The Scottish Borders are beckoning again, hopefully for me in August and September.

Oh, yes - I remember him and his absolute insistence on walking naked - both into prison and out of it.

Oh, and thanks for putting a spot on for me the previous day. Most welcome, needed and appreciated Phil!

Congratulations on discovering Blencathra. It is one of those magical summits that changes dramatically with the seasons. I never tire of looking at it. Not so sure about ‘wobbly bits’ however!

Good morning Dave, also Phil & Mark,
Excellent report and photos. You did a circuit it seems. That’s quite a long walk but you made a day of it. Sharp Edge is fun but it’s no good for a quick activation. I took my two sons up it in low-cloud and drizzle when they were 12 and 14 and it took us an hour longer than your time. Also I have a full length video of it I made over 10 years ago. That was on a dry sunny day so hands could be used for camera operation; an old analogue camcorder weighing a kilo. How we’ve come on since then. Must get it digitized.

It looks like you have the same rucksack as me. We’ll discuss at the club, whenever that may be?

Have you a photo of your mast and aerial? You probably forgot to take one. Too busy trying to get contacts.

It seems the naked man is cheating. He’s wearing boots! In all my years of walking I have never come across anything like that; the nearest being a chap in only miniscule speedos on the slopes of Fairfield. I’m just the opposite. Sunshine is an enemy on the hills and I’ll do anything to stop it getting in anywhere I possibly can.

You certainly struggled with contacts and it’s not easy if the phone’s not working. Blencathra overlooks Keswick and the A66 and I have never had any dropouts there. Maybe there was a mast out of commission or there were too many masts at too great a distance. I’m told the phone system can behave unexpectedly when it can ‘see’ a long way.

It’s tricky in that situation but you did the right things. All you can do is head where you’re likely to find SOTA chasers such as 7.032 or 10.118, even 14.061 but that’s less likely. I know you prefer CW but maybe you could take an FM handie for insurance? Apologies in advance if I’ve just sworn! HI. The RBN has only picked up my signal a couple of times. In the early days that was down to using a club call and alerting with my own.

Enjoyed that, thanks Dave,
73, John

I’ve come across one other naked man many years ago!

The rucksack is a Berghaus Freeflow 35L + 8L (expanding side pockets.) I picked it up in a charity shop in Pickering for £5. Its a good rucksack too.

The mast is "Life’s a Breeze one 4m and when collapsed fits completly inside the bag. I use this home made stake for it:- 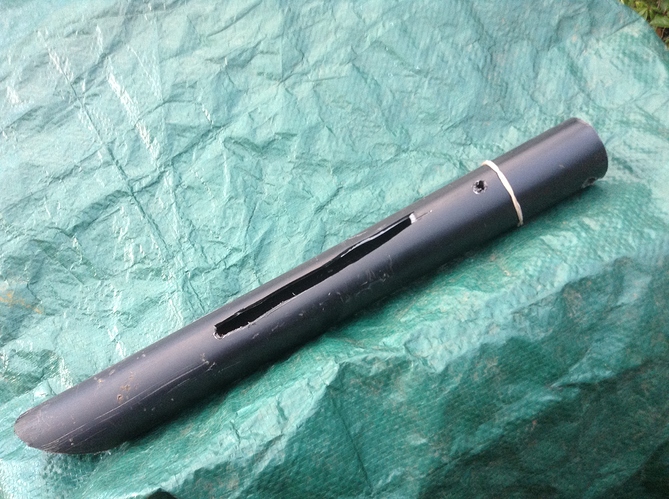 The slot is so I can remove any soil or peat that won’t bang out when removed. The hole near the top is so I can hook it out of the ground with a tent peg if needed. I also use it to create a support if there’s plenty of stone around too and I don’t have to worry about the base of the mast getting damaged during use or whilst you are piling stones around the foot of it. I’ve yet to use any form of additional guying system other than that so far.

Yes, you’re not the 1st person to suggest the safety measure of a handie and I actually own two, one which was a free gift from the RSGB when I joined and other is a Baofang. (I have inexpensive tastes). I have used the Boafang a couple of times, and would normally carry it, ‘Just in case’ . But of course that day I forgot it!! Typical.

Did we get bonus-points or penalties for naked SOTA?

Not sure the MT are keen to adjudicate any scenario where someone questioned if another person was naked enough to qualify for the bonus.

Guess my experience on the summit of GM/ES-008 would qualify - I was asked to take a photo of the Kiwi walker (female) who “ran” round the trig point naked! Had to put my hands over my dog’s eyes in case he was shocked by the sight

Had to put my hands over my dog’s eyes i

Is that one of yer fancy British euphemisms?

Well you wouldn’t want the dog eating someone’s sausage. Would you?

Check the post!!
Apparently SHE did this for every new hill SHE summited anywhere in the World

Is that one of yer fancy British euphemisms?

Nah - I was holding the camera!!
Anybody who knows the summit of Lochnagar will also understand the quotes around “run” - not much room up there!!