With the turn of the year, the counter had been reset and as the weather was fairly warm, I planned to activate two easy summits nearby.
The first destination was Wandbühl (DM/BW-041), which I reached after a 45-minute drive. The contrast compared to January last year could not have been more significant. Back then, there was half a metre of snow and it was a struggle to make my way to the summit. Now the temperature was around 10°C and no trace of snow. 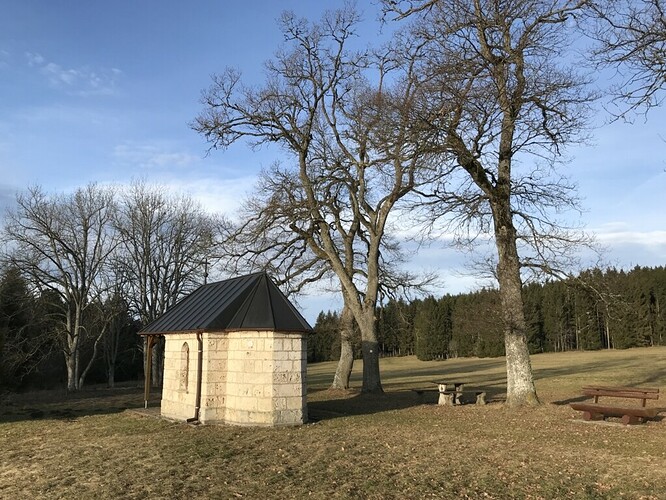 The climb took about 20 minutes and the set-up (in the lee of a ridge) was quickly done. Because the pile-ups had reached crazy levels lately, especially on 40 metres, I planned to activate the bands in the order 20 - 30 - 40 metres. This way, I hoped, the chasers would be more evenly distributed among the bands.
The start on 20 metres CW was impressive: 23 QSOs in 18 minutes. That is considerably more than usual. Surprisingly, however, after QSY on 30 metres not a single station came back to my CQ, although I called for ten minutes.
In the meantime, some activators had appeared on the bands and so I took the opportunity for some S2S QSOs. Here, the biggest challenge is to make your QSO before other chasers notice. Otherwise, you may have to wait a long time for your QSO when operating QRP.
Finally, time was pressing for activation on 40 metres CW. Here an enormous pile-up formed within minutes, but the discipline was - unlike recently - excellent. It was possible to maintain a constant rhythm and more than 30 QSOs entered the log smoothly.

Half an hour late - compared to my plan - I started the walk back to the car park and the journey to Plettenberg (DM/BW-046). From the car park there, a paved track leads through the forest, taking the hiker to the summit plateau in 15 minutes. As the wind had picked up considerably, I set up the station somewhat sheltered behind tall fir trees. 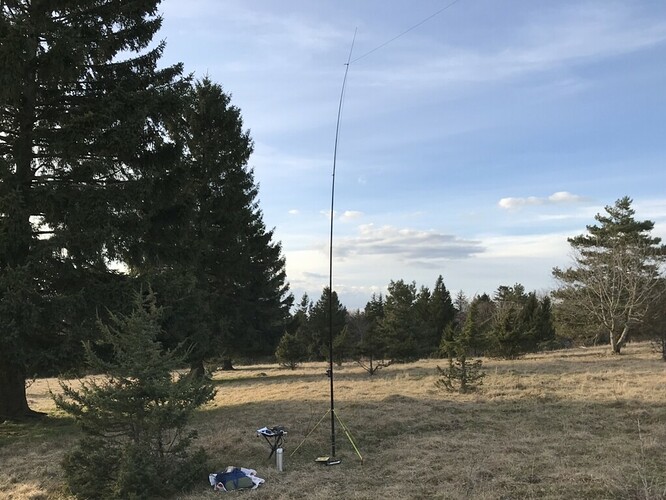 After a sked on 40 metres SSB I took the chance to stay on frequency and was kindly spotted there by the OM. A brief but intense pile-up followed, which was terminated by a powerful station that started calling CQ right on top of my frequency. Nevertheless, more than 20 QSOs had entered the log in this short period and so I called it a day.
The activation continued on 20 metres CW (25 QSOs), 30 metres CW (3 QSOs - again unusually few!) and 40 metres CW (26 QSOs). The discipline in the pile-ups was very good and everything went smoothly for the most part. A really nice experience

Eventually it got cold and I started the tear down. Unlike the ascent, I chose to walk along the rim of the quarry. There are beautiful views on the way. At the end, a short but very steep descent back to the car park is waiting. 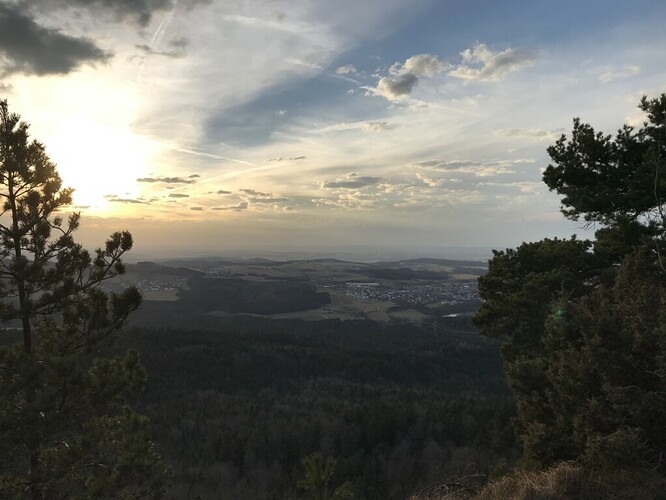 It was a great day with lots of QSOs and New Year greetings from good friends.
The SOTA year can’t start any better

You had a good day

Thank you for the 2 S2S (via ground wave

) and a new complete

Thanks for the nice report, the fotos and most of all for the S2S QSO on 60m!

Thank you Roman for the report. Always a pleasure to read about other activator’s experiences. I hoped to read though that 30m would be more alive, especially because I recently got the QCX-mini 30. It is strange that only a few chasers came back to your call on this band. Usually 30m is also reliable, not so busy though than 40m.

Thanks for the write-up and photos Roman. I happened to have my radio on in the background and heard you call on 30m from 046 before the spot went out. Funny how you can hear ’ CQ SOTA’ in cw even from another room in the house

I did call you but a non-SOTA station then started CQing on top of you, but thankfully you moved down a little and I worked you on the second attempt

Strange the low activity that day on 30m, sorry I wan’t around to catch you on the first summit. Usually its a very reliable and pleasant band to operate on, one of my favourites. Look forward to working you Chris with your QCX-mini.

Wow, what a difference in weather between this year and last! Thanks for sharing!

It was nice to see you again on S2S 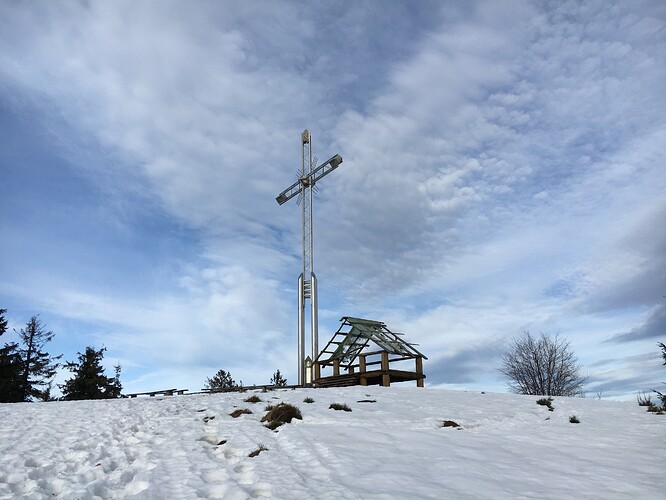 View to South - onto very typical summit of OM/ZA-017: 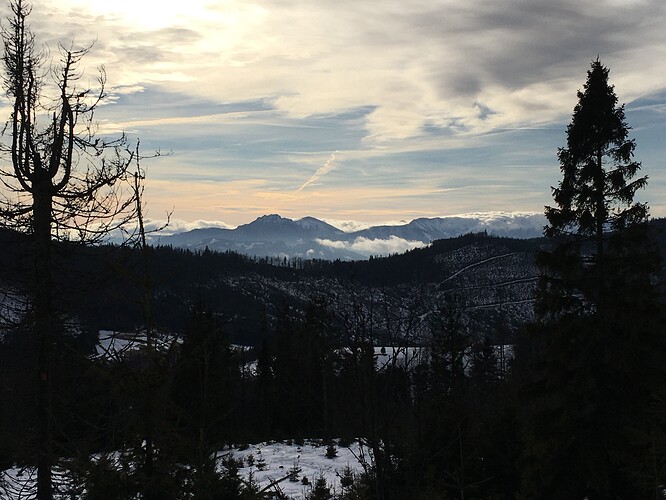 Wow, thanks a lot for all the nice comments!

@DM3FAM: you found me on 40m SSB before the pile-up arrived. I’m really glad you called in even though you had just returned from geocaching. Cu soon!

@DL6GCA: My pleasure, Armin! We made quite a few S2S-QSOs on ground wave already

It seems to work very well between the Black Forest and Swabian Jura. Please keep it up

@OE5EEP: Thanks Heinz for the S2S-QSO. Signals were not too loud but 60m works well for the typical distance between our mountain ranges

Looking forward to the next one!

Enjoy activating with the QCX-Mini on 30m

causing a dent of five QSO-less minutes in my log.
You were the first contact after I moved slightly down in frequency. It’s always a pleasure to QSO!

@MW7SRA: Sara, this is what the place looked last year in January 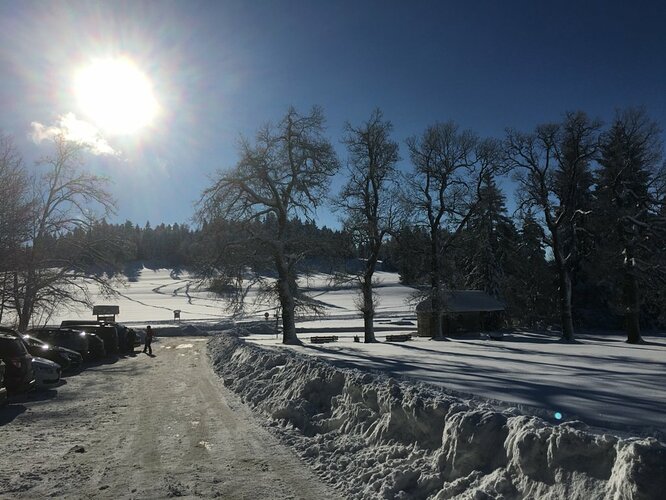 @DH8WN: Ludwig, it’s amazing how many people are interested in SOTA these days! A few years ago 100 QSOs in one day were incredible. Now you just need to have enough time to log all QSOs.
Looking forward to our first S2S

@SP9MA: Thanks for the S2S-QSO and the beautiful photos, Jarek! What a beautiful location you have been operating from!
I’m glad you called in on 40 CW

I knew you were out there but missed you somehow.
Looking forward to many more S2S during the year