I activated G/DC-006 Carnmenellis this morning but yesterday I wasn’t sure if it would go ahead. The reason was during the afternoon my wife and I did the 5 mile circular walk around Stithians Reservoir. All went well until we were about 200m from the end of the walk when she was simultaneously attacked by a Cornish tree root and a metal gate with sharp edges. The result was I spent a couple of hours parked outside here yesterday evening. 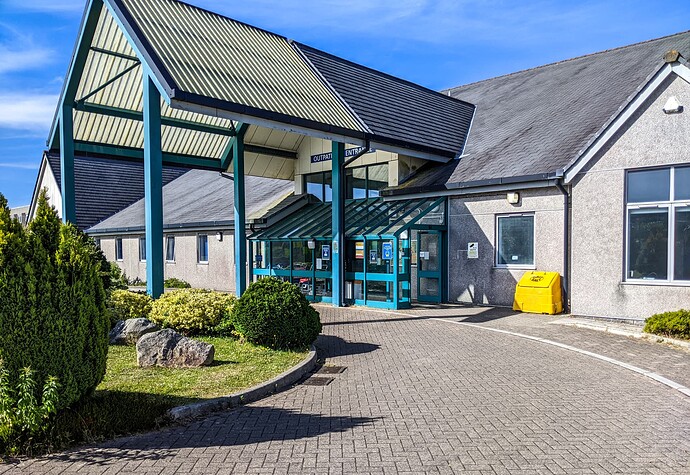 It is the Minor Injuries Unit at Redruth Hospital where they repaired my wife’s deeply cut finger with super-glue.

It was sore last night but pain killers (and wine) worked and she was happy for me to leave her in the campervan today while I “played radio”.

We are staying at a good small campsite behind the Golden Lion Inn from where a 30 minute walk will bring you to the summit of Carnmenellis. There is also parking at the sailing centre next door. It is not reserved for sailors and is used by walkers. 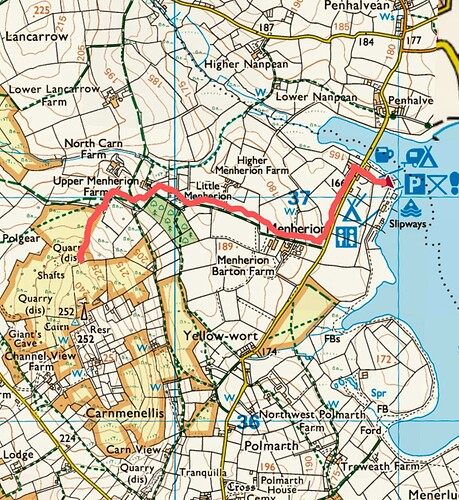 All of the accounts I have read about this summit used an approach from the south west but my approach from the east and then from the north was straightforward. The last part of the track at Upper Menherion Farm looks like this. 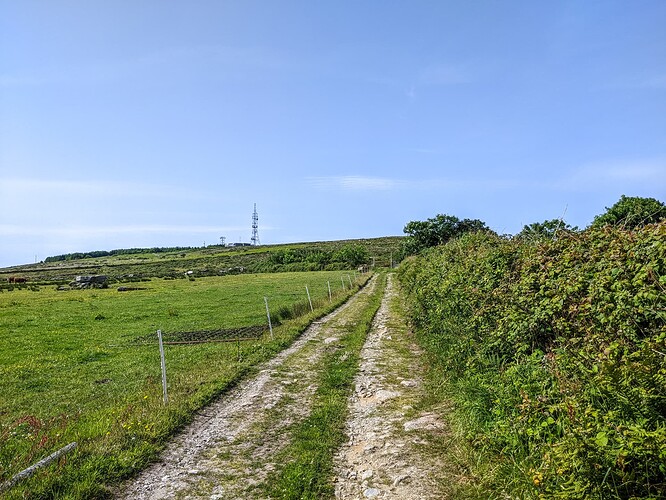 The end of track looks closed off but the gate on the right can be opened - the chain has a curious toggle connector that reminded me of one of those wire puzzles you get in Christmas crackers! 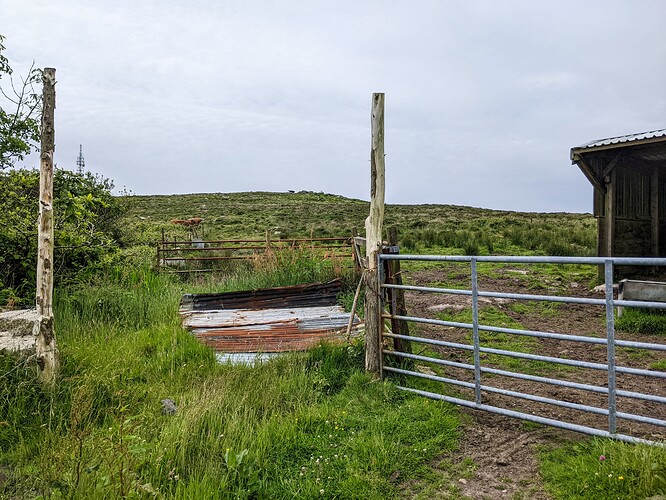 Once through the gate carry on straight towards the rocks on the skyline, picking your route through the gorse and peat hags. The going is rough in places, ankle breaking stuff due to the residue left behind from mining and quarrying.

I set up just above the 235m contour which is within the activation zone of this 252m summit. I had brought my Helinox chair with me but didn’t need it as there were lots flat rocks to sit on. 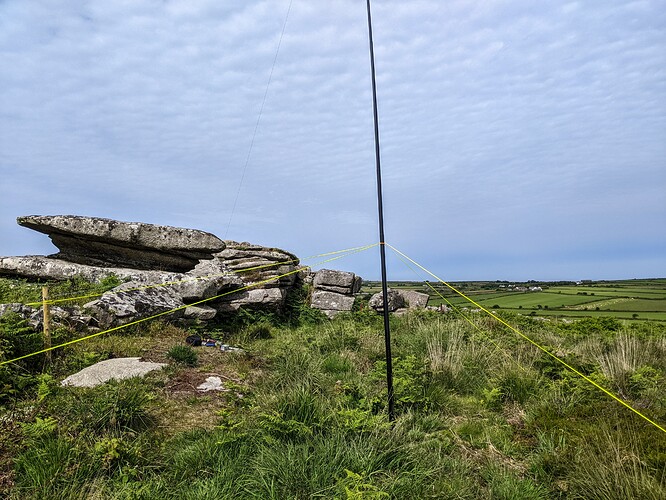 This is the view looking back towards the reservoir. The campsite is on the left. 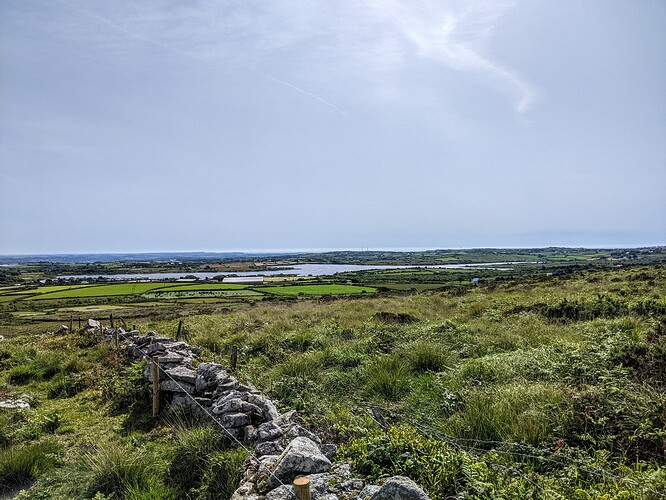 I had planned to open on CW but discovered the cable to join the key to the radio wasn’t in its usual place and had been left at home. My fault entirely of course, I had been doing some testing recently and had left it in the shack.

So I started on 40m SSB although finding a spare frequency was not easy. I called CQ for a few minutes before hearing the familiar voice of Don G0RQL. There were no other replies on 40m which was a bit worrying but a change to 20m livened things up with Lars SA4BLM coming through 59 although he only gave me a 52. S57S in Slovenia was followed by Dave calling as EA6/M0DLL and presumably on holiday.

Two S2S followed, the first contact was with Nuno CT2HOV/P calling from CT/MN-034 but I really struggled to hear him and he gave me a 31. I then completed a QSO with Martin M7BIA/P on Shining Tor G/SP-004 before hearing Nuno again in improved conditions, with my report going up to 54 which allowed us to complete the QSO with a bit more confidence than on the first attempt.

There then followed several Spanish operators in quick succession. I closed on 20m after speaking with Manuel EA2DT and tried 17m briefly but managed only one QSO with EA3EVL who had also contacted me on 20m.

I tried 60m SSB at the end but without success.

A map of the activation is shown below. Many thanks to all the chasers. My signal was weak and it must have been a struggle to hear me at times. 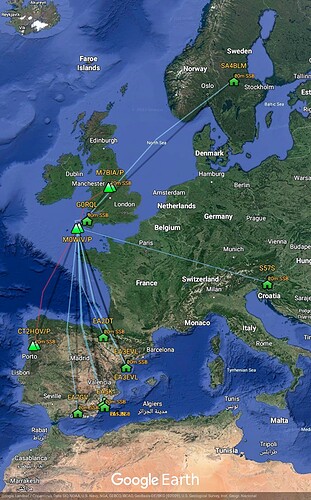 And when you are staying at an Inn what better way to celebrate the activation but with an appropriately named beer? White wine for the injured wife of course. 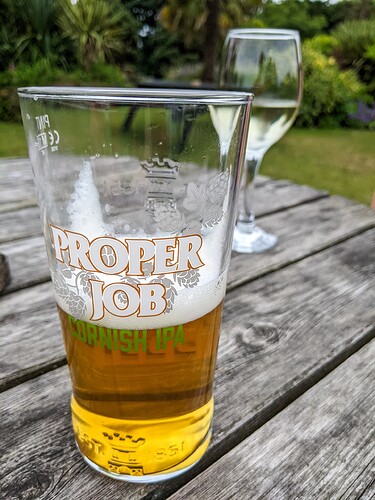 Tomorrow I will attempt G/DC-007 using VHF and UHF but will have HF ready if needed.

I want to try 6m tomorrow so I hastily made a delta loop the day before we travelled using the design suggested by Andy @MM0FMF with 2 guy ropes to hold out the corners and the coax terminating at the apex.

I’ve just set it up on the grass in the campsite and given it a quick first test. The SWR isn’t perfect so the length needs tweaking but it is acceptable and I will use it tomorrow.

But when I first tried it I was puzzled to see very little current being drawn according to the display on the IC-705. The reason was easy to identify - the power was turned down to zero percent! Except it isn’t actually zero and it would have been transmitting today - but at only 2W or perhaps 3W.

Hopefully tomorrow’s signal reports will be better! But it does show that even using SSB you can get through with low power.

and the coax terminating at the apex.

Andy, thanks, yes I’ve got a bit of 75 Ohm TV coax at the end. I haven’t coiled it around a bit of pipe but might look at that when I’m back home and get the VNA to investigate what is going on.

Deploying it was a bit awkward at first as the coax and the two wires coming from the apex tended to tangle as I hoisted the mast. The trick was to stretch out the guy ropes first on the ground before raising the mast. A bit of heather and gorse on a summit may actually for once help with this operation. :})

In Birmingham I could just tell you were there, 40m was very long.

Of course I now know why my signals were struggling to get out.

down to zero percent! Except it isn’t actually zero and it would have been transmitting today - but at only 2W or perhaps 3W

I’ve got something else on tomorrow morning but if I get back at a readonable time I’ll try and head up GW/NW-042
or 43 and I’ll take 6m with me as well (6m is vertical only though).

Thanks for another great report and photos. Sorry to hear about your wife’s accident. Hope she’s recovering well and the pain is subsiding.

Good luck for your activation tomorrow.

The delta loop I’ll be using on 6m must have some vertical component given its shape. Should be worth a try.

We would be too close for any skip but my understanding is if there is a skip involved polarisation does not matter.

I should add the local wildlife was friendly despite appearances. 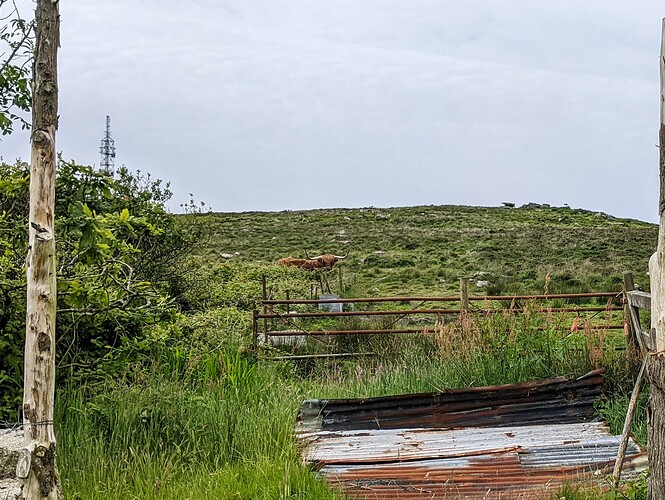 I’ll take my 2m beam if I remember.