Sunrise was at about 0830hrs, I poked my head out of the tent about an hour before to find a thick mist. I was sluggish getting started, and it was a rather shockingly late 1000hrs before I was on the move – headed for the summit of Seat Sandal (G/LD-022).

By the time I was moving the mist had started to lift a little, and I could make out my target of the col at the head of Raise Beck – from where a tumble-down dry-stone wall leads to the summit of Seat Sandal (G/LD-022). The col has a spot height of 574m – Grisedale tarn is one of the highest large tarns in the lake district. 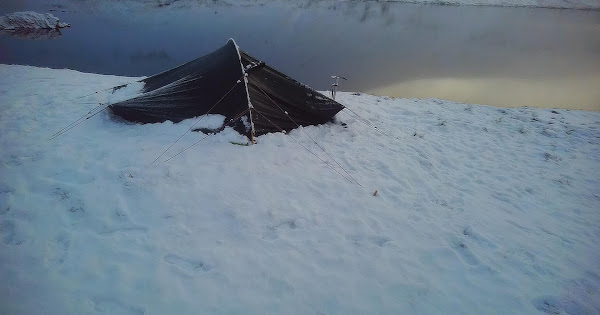 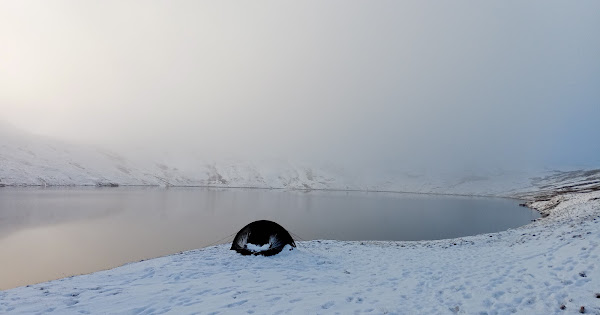 Seat Sandal (G/LD-022) has some particularly interesting geography: Raise Beck drains the north flanks of Seat Sandal (G/LD-022) and is the only river I know which splits and so flows into widely different outflows. Just above Dunmail raise the river splits with half flowing NW and discharging into the Irish Sea at Workington whilst the other half flows south to Grasmere, Windermere and eventually Morecambe Bay. The effect is quite striking on OS maps.

At this point, with the late start to the day, and additional overnight snow I had abandoned plans to reach the High Street range – Red Screes too was looking very doubtful.

Atop Seat Sandal (G/LD-022) I readied the VX6 again with the RH770 and called CQ SOTA at 1113hrs. First to respond was @G0TDM followed by G7CDA, G1OHH and G7OEM. Through conversations with chasers I discovered that Cumbria had moved into Tier 4 of the Covid restrictions at 0001hrs that day – rendering me a fugitive from the law for being away from home overnight. I pulled my balaclava down tighter and removed the high-vis cover from my backpack 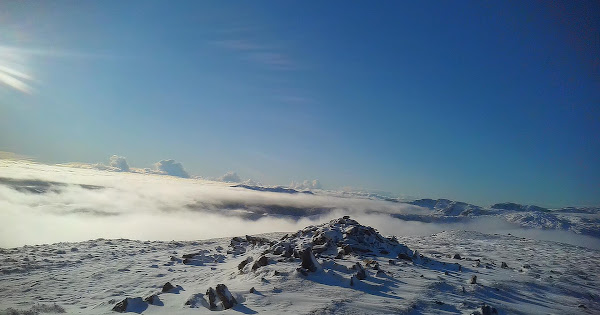 I made 13 contacts in total and then spent an hour catching up with news/emails on my ‘phone. By the time I was off the summit and back at Grisedale Hause it was almost 1300hrs, and so I had abandoned all plans of attempting Red Screes.

Reflecting on the Tier 4 situation, it did not seem right to prolong my walk unnecessarily by taking large detours to SOTA summits, but neither did it seem appropriate to take any further action than walk home by a fairly direct means. I resolved to retrieve my antenna from Fairfield (G/LD-007) and then camp at Grisedale tarn that night, with the possibility of tackling some of the surrounding summits the following day and then walking home.

I set about climbing Fairfield (G/LD-007) for the second time, and arrived at the summit at 1340hrs. After a bit of searching in the snow I found my antenna and then gave a quick CQ SOTA using the rubber duck antenna. Only two chasers returned to me – G6LKB and G0TDM – with whom I had a brief chat about my onward plans.

After the brief activation I headed down to the tarn, and with sunset due in about an hour I began to pitch my tent.

After about 1600hrs the weather seemed to deteriorate, becoming quite windy with driven snow. I ventured out of my tent to collect some water and was careful to keep the retro-reflective tabs on the tent corners in view of my headtorch. I have read tales of climbers on Everest being found frozen and expired within metres of their tent, having circled around it for hours in the dark unable to locate the thing – I didn’t want the same to happen to me!

It was a rough night, with frequent heavy gusts hitting my tent broad side. I had poorly sited the tent, and at one point at 0200hrs on new year’s day considered moving to a more sheltered pitch however one look outside at the blowing snow made me decide to stay hunkered down where I was. The Hilleberg Akto tent I was using is reliable, I have only once had a tent pole bent - tonights wind was nowhere close to the mayhem required to cause such damage.

This morning the weather did not look as promising as the previous two days, and after the poor night’s rest it did not seem like a good idea to tackle a big mountain day. It would also seem to not be in the spirit of the Tier 4 restrictions, which would encourage me to head home. I therefore took the decision to head down Raise beck, reaching the road at Dunmail raise. I set my target for the day as Buttermere via High Tove (WOTA Wainwright Summit west of Thirlmere) and possibly SOTA summits Dale Head (G/LD-020)/Robinson (G/LD-021) if time allowed.

The descent down Raise Beck was rather icy and I did feel a sense of relief at reaching the bottom. I had spent two nights in the snow without dropping below 550m, so the pass of Dunmail Raise felt like civilisation. 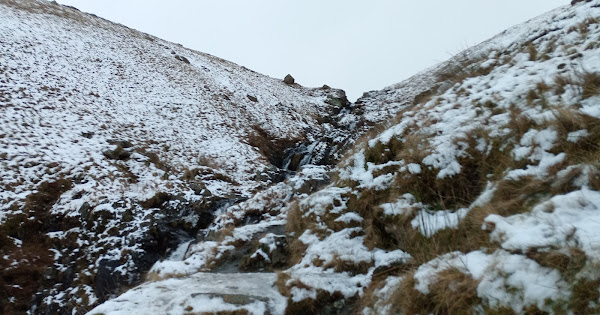 After a brisk walk alongside Thirlmere I was atop High Tove by midday, and rested there while looking back at the Helvellyn Range – the tops were clagged in mist. The WOTA programme was suspended – so I didn’t put a call out. 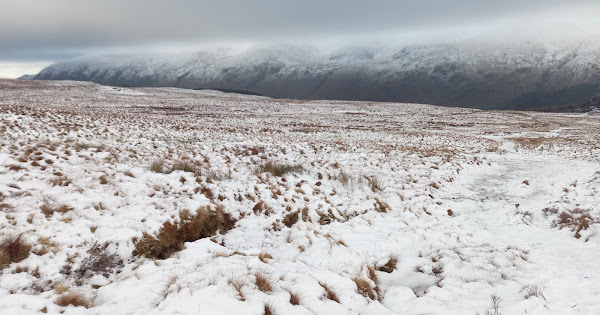 After High Tove it was on to Watendlath – where in normal times a mug of hot chocolate would have been procured form the tea room. Watendlath always seems a Rivendell-like haven on long walks and has many times provided succour in poor weather. No such comfort today. Hoping to make it up Dale Head (G/LD-020) I marched on to the summit of Honnister, reaching the top at 1530hrs.

I recalled having cycled to this spot in November to climb Dale Head (G/LD-020) and Robinson (G/LD-021). I could be home by tea-time on a bike, but tonight I was looking forward to a cosy night out in my tent.

At this point the road walk had taken a toll on my feet – I was wearing B1 boots with a semi-rigid sole for crampon use – not ideal for road walking. With tired feet, a poor nights sleep the day before, and fading light I decided to head into the valley to make camp rather than tackle Dale Head (G/LD-020). 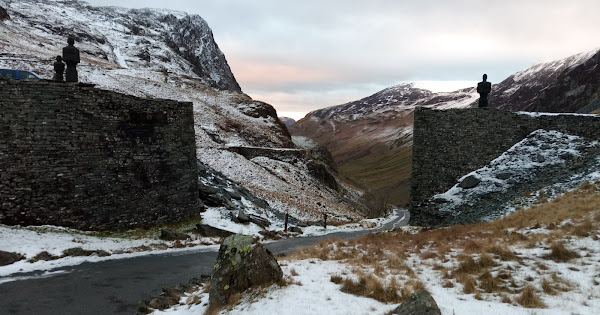 Once down in the valley I headed between Buttermere and Crumnock Water to camp at (NY 162 172). It was dark as I passed through Buttermere village and I was pleased to find a spot to pitch my tent on the west side of Crumnock Water.

My tent was pitched before 1800hrs and after cooking (ie rehydrating) Sate Babi for dinner I watched a downloaded film on the ‘phone, read for a bit and then went to sleep.

I was up before sunset to find that the rain I had heard in the night had actually been hail. The tent fabric was frozen rigid and condensation on the inside of the inner had formed ice, with flakes dropping onto my sleeping bag. Despite being low in a valley, it was the colder of the three nights, with the damp air making the sub-zero temperature sap heat more quickly. 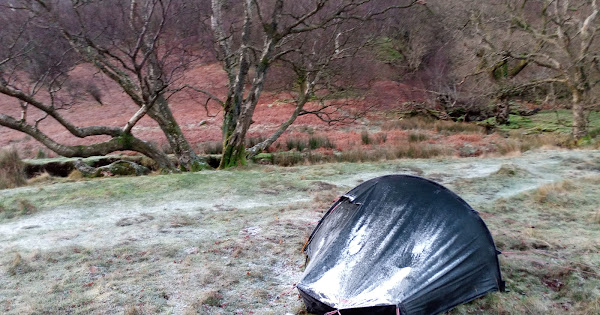 My walking boot laces were frozen solid and had to be bent into a knot rather than tied. It was good to get moving (at about 0845hrs – a late start again), and the overnight hail added some traction to the frozen ground.

Target this morning was Melbreak (G/LD-036) which I ascended by the South end of Scale Knott. The route was frozen turf from the bottom, and so needed some care. Since I had carried it all this way I unstrapped my ice axe to carry in hand – it would be embarrassing to suffer an injurious slide with the axe strapped uselessly to my pack. 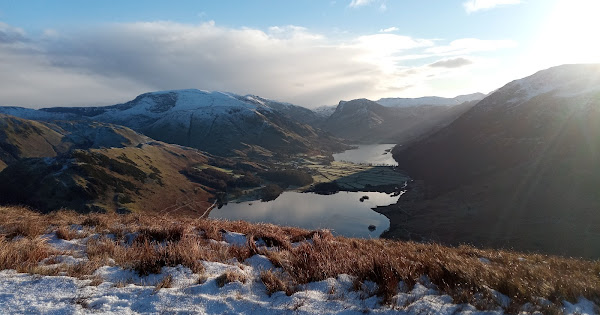 Atop the summit I double checked that it was indeed the south summit that was the SOTA summit, and called CQ SOTA at 1035 hrs. First to respond was M0DXT followed by 2E0MIX, with whom I had a good chat. 2E0XUP followed and I was able to give an update on my adventures since our last QSO when I was atop Seat Sandal (G/LD-022). The fourth contact took several minutes, and Derek (2E0MIX) very kindly raised a spot alerting my need. Fortunately @2E0DNW called in – he was portable, out for a walk along the coast. I spent several minutes chatting, pleased that my efforts would now be rewarded with SOTA points.

After packing away I attached the rubber duck to the VX6 to keep monitoring, whence I heard GM4WHA calling me. A quick change back to the RH770 yielded my fifth contact for the day, and I was now ready for home at 1101hrs.

I retraced my steps to Scale Knott, and then headed west from about the 350m contour to cross Mosedale and reach Mosedale Beck at a small foot bridge. I recommend keeping to the tracks in warmer weather, but with the bog of Mosedale being frozen this direct route was beneficial.

Mosedale shares its name with a favourite location of mine in the eastern lakes, in the Shap fells, where an excellent bothy has been the venue for many overnight stays. Both valleys are similar in appearance and bogginess.

Having gained the track it was now an easy walk past Floutern Tarn to cross the watershed at Steel Brow – from which vantage point I had sight of Ennerdale, West Cumbria and home. While descending to Ennerdale I had a good chat with 2E0MIX. Shortly before meeting the road at (NY 099 167) I found that the path had been deliberately blocked with holly branches, forcing a climb down into a drainage ditch and a spot of gill scrambling to reach the end of the path. 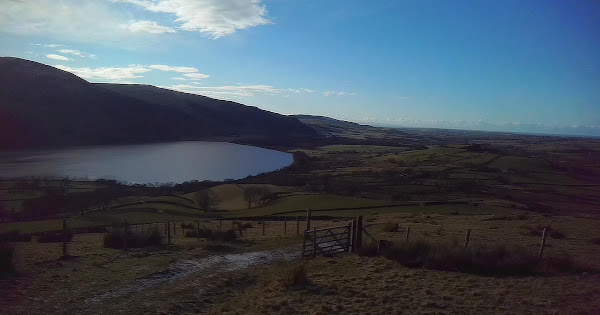 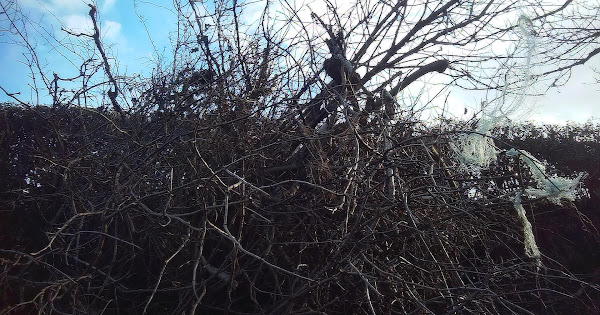 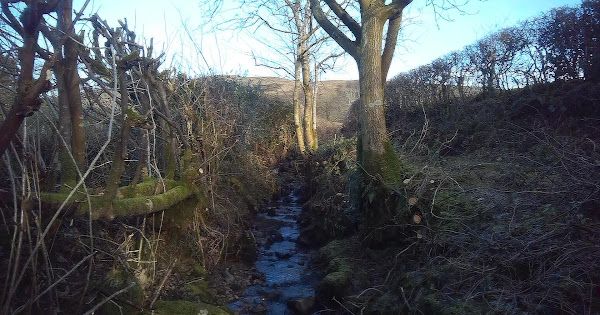 IMAGE – The alternative route – a ditch

The remainder of the journey was a mixture of tracks and road walking taking until sunset and making for a total of four days walking for around 50 SOTA points - but more importantly, lots of adventure.

I am very grateful to those who chased me whilst I was out, I enjoyed all of the QSO’s and appreciated having a chat when conditions allowed.

I will include an equipment list in a separate topic.

Great write up thanks Matthew and you have been a very welcome addition to the SOTA/WOTA activating community in the Lake District. Look forward to hearing more of your adventures in the future.

Thank you for the reports and photos Matthew.

Having done them all for SOTA I was with you all the way. I hasten to add that I did them in fine weather conditions so well done on your achievement.

Hope to catch you s2s someday.

Brilliant. Thank you for such a great write up. Really enjoyed reading it.

I was pleased to get you from here, especially using QRP.

Looking forward to getting back up to the Lakes later this year - it would be good to catch you S2S.
73,
Simon

Thanks for your comments, looking forward to the end of covid so I can have another long walk and a few more QSOs with you all.

I’ve spent plenty of nights in Igloos or Snowholes which are far superior to tents, and weight nothing, so hats of to you for having the discipline to stay on the tops in a tent in winter.