A Welshman and his dog in the Lakes G/LD land

A very early start for Sniffy and me on Saturday morning, leaving Mid-Wales at 3am in the morning with a 4 and a half hour journey in the old discovery to ‘Wasdale Head’ in the Lake District. 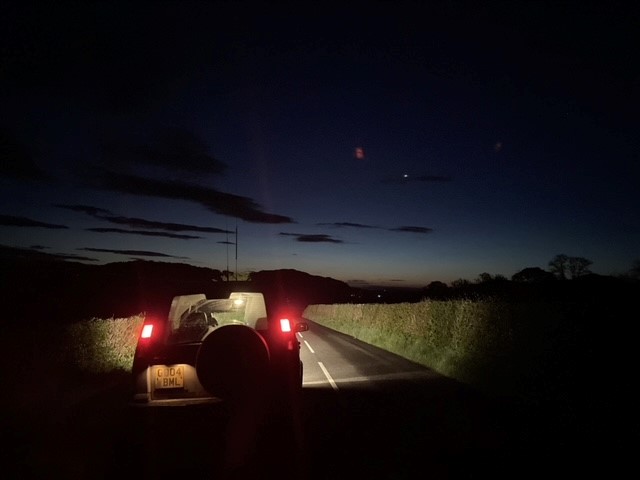 After a few coffee stops (and fuel stops

) and songs listened to on the radio, we eventually approached the Lake District which never disappoints on the wx front. The sun was rising with blue sky around us - that always helps on a big SOTA adventure. 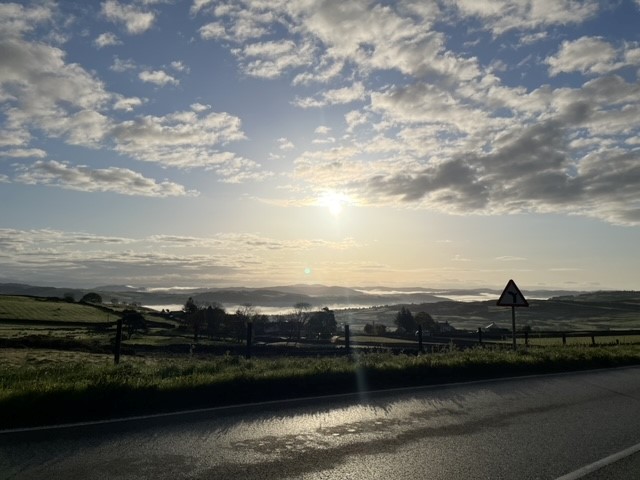 We arrived in quite a large car park just south of Wasdale Head, with the sun beating down on us. Gathered all my gear together and off it was to go go go.
The route began following a flat path for a good 1/2 mile where I could see my first summit in the distance ‘Great Gable’ G/LD-005 - it did look a beast from afar! 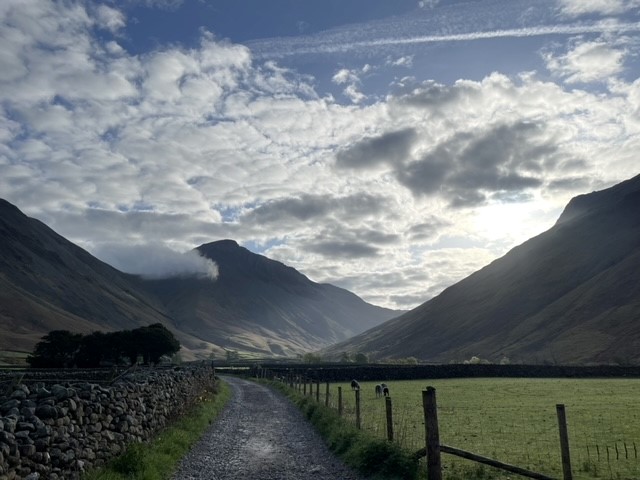 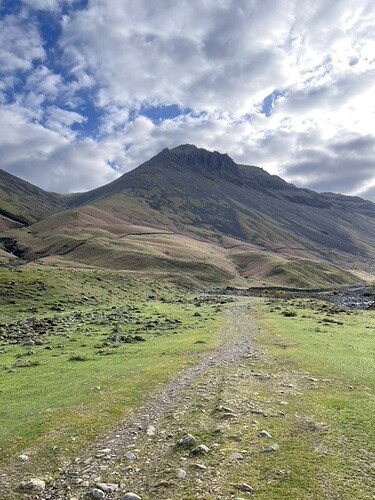 We went over a small bridge and veered off to the left to begin the climb. This was steep, well it felt it after a 4+ hour drive, haha. I reached half way and took a nice image of the valley behind me. 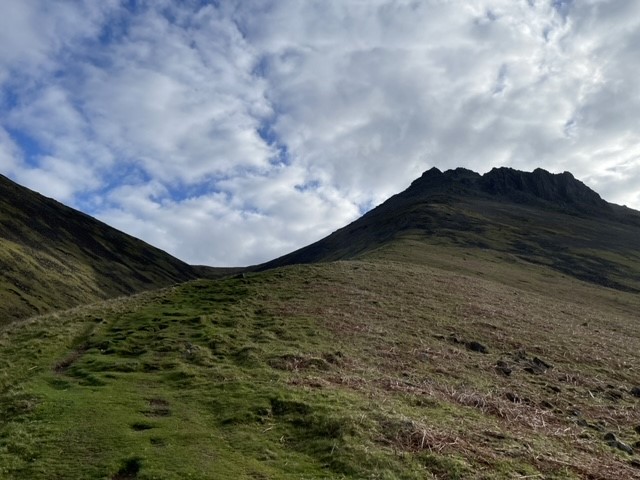 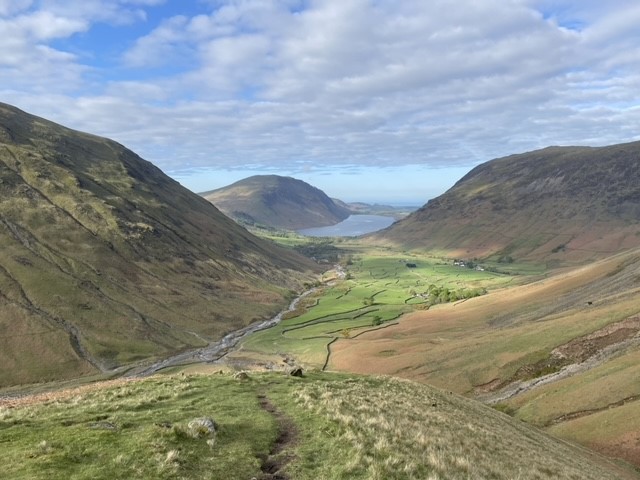 Now the route I had planned was not the best! I studied the map and thought I’d manage to use the vertical path all the way to the top… never again! I ended up scrambling for quite a while and in a few places I had to rock climb, and carry little Sniffy. You’ll see on the map below, I choose the green line, not the best choice I’ve made! 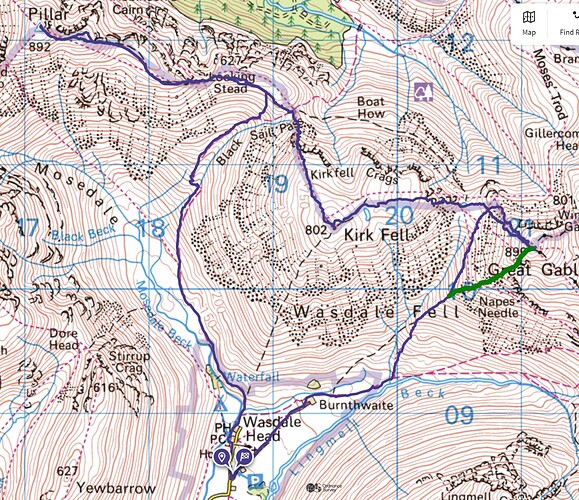 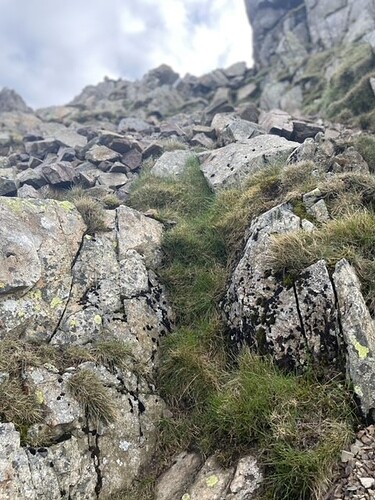 Nevertheless, Sniffy and myself made it to the top safely in one piece. I set up for HF while Sniff had a drink. 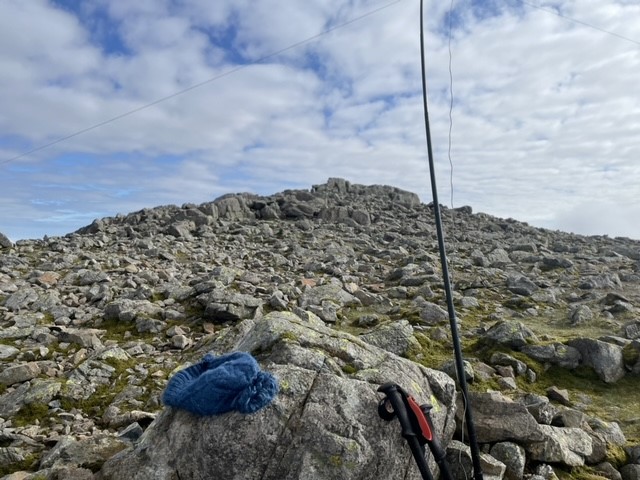 Put a call out on 40m and managed two contacts the band wasn’t very open, tried 60m and that was the same. I did manage to get a S2S with Neil @G0WPO on 40m who was operating in GW/NW land - thanks Neil. I then called out on 2m FM and managed to work a further 8 stations in the log. Summit number one of the day qualified, time to pack up and make our way to summit number two ‘Kirk Fell’ G/LD-014.
The descent from Great Gable was down a steep scree with a lot of loose stone, so you can imagine, there was some slippery moments, but we reached the bottom safe and sound. 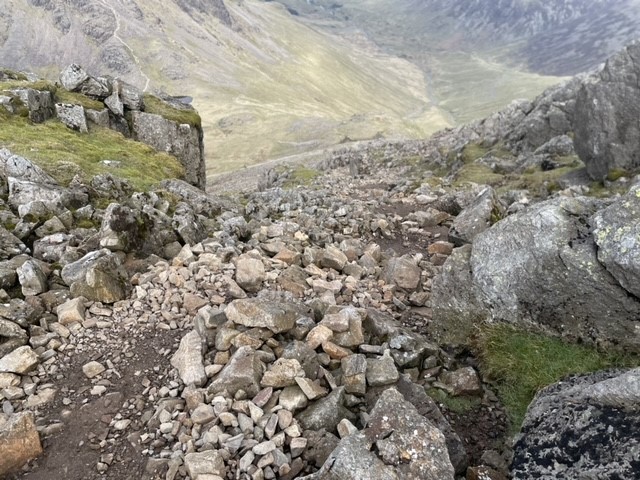 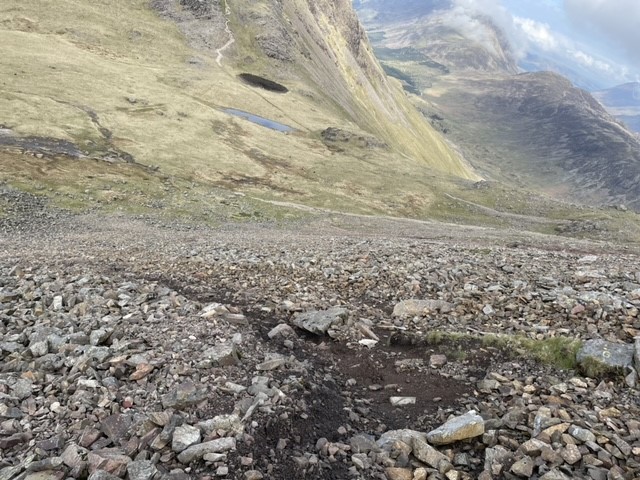 Now we were in the col, a few hundred yards of flat walking to then hit a vertical rocky climb thinking the summit would be on top… No… we had another grassy flat walk and a smaller gradual climb to find the summit

Great Gable was really standing out in the background! You don’t realise how high it is when climbing. 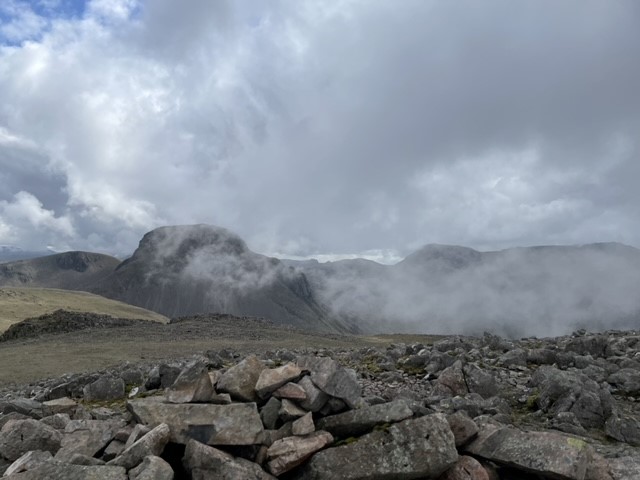 We found a nice Cairn on top where I used as my office and Sniffy guarded my antenna while I operated on HF. 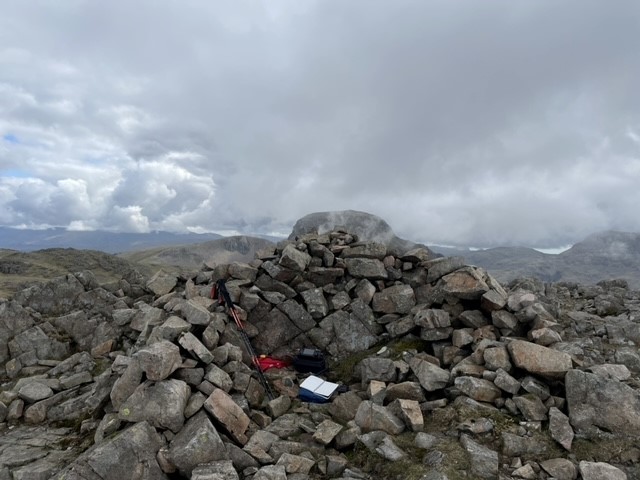 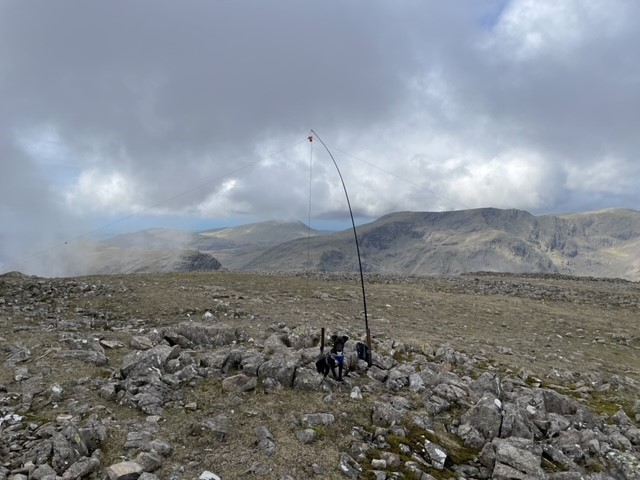 Put a CQ SOTA call out on 40m and managed 8 stations in the log - conditions were improving slightly! I then moved over to 2m FM and managed a further 4 itl. Put a few final calls out and packed everything away. It was time to have some lunch while eyeing our next and last summit of the day up ‘Pillar’ G/LD-006 which was standing in mist in the distance. 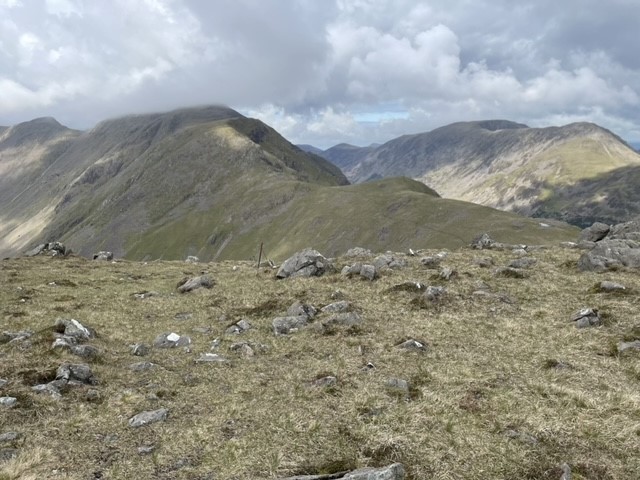 Once we had a drink and were full of food, it was time to plod on. Again, a nasty scree to descent off Kirk Fell to the col. The stone/rock under feet was loose, so you had to take care not to slide. When we reached the col, it was a nice gradual climb on a well worn track towards Pillar for a few hundred yards. It was then a matter of following a steep rocky path all the way to the trig on top with lovely views of the valley behind. 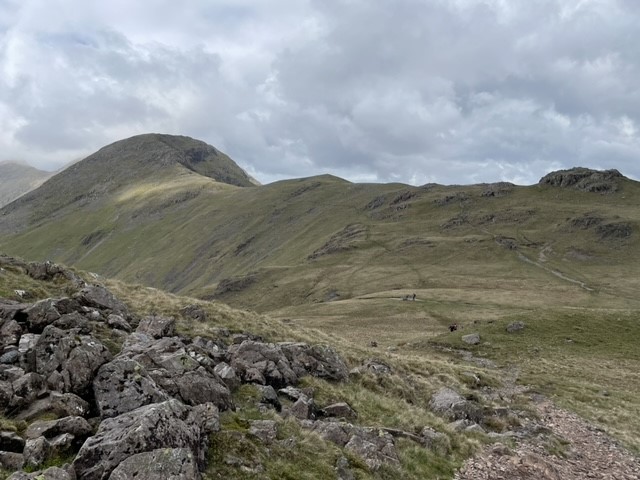 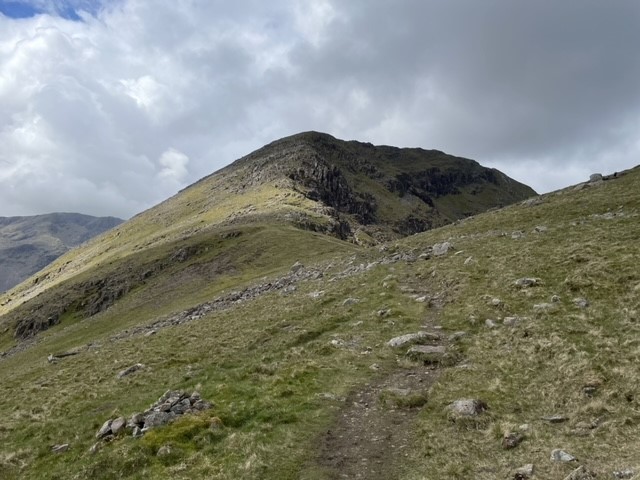 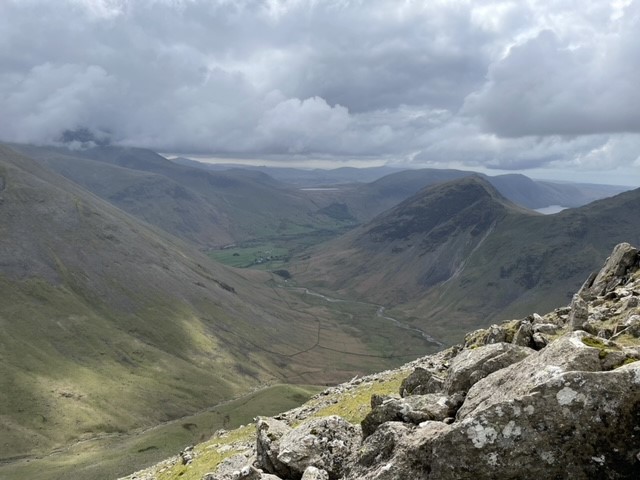 On top it was rather busy, so we passed the trig point and found a nice small cairn to get set up. 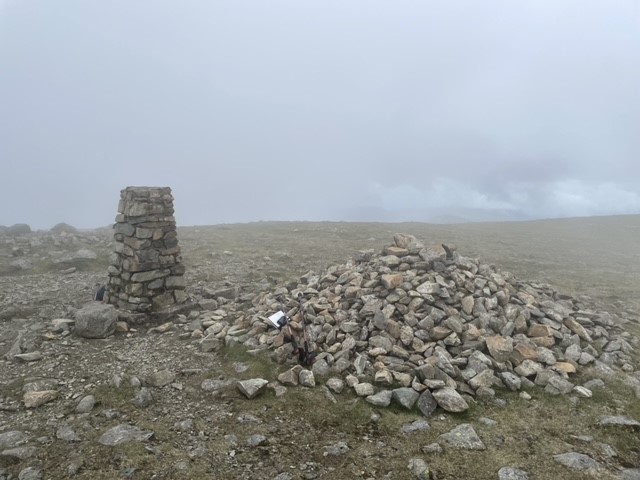 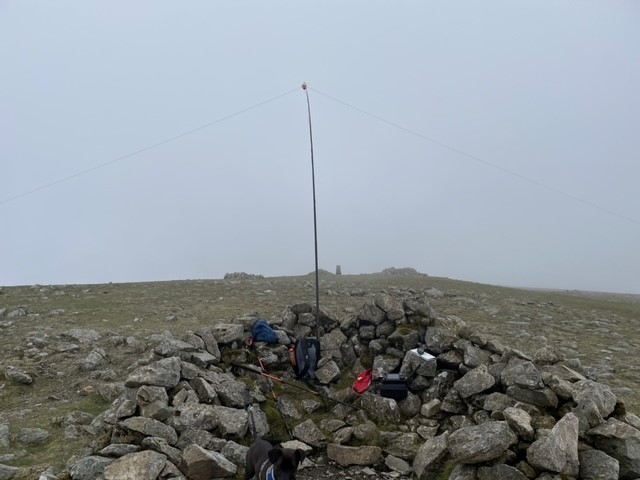 I put a call out on 40m and managed 12 in the log with one being a S2S station, Martin @M7BIA who was on G/SP-004 - thanks Martin. I then moved over to 2m FM and finished off with a further 8 stations itl with two being S2S contacts, Malc MW0NLG and Kevin @MW0KXN who were operating close to each other in GW/NW land - thanks both, great to make the qso!

A sigh of relief, 3 summits qualified and a reasonable day out

it was now time to have a summit selfie - it’s gotta be done, hi! 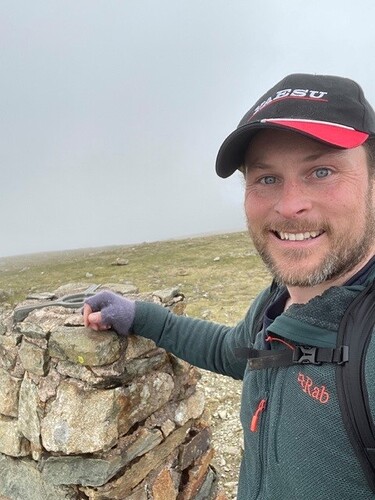 And head for the truck in the distance. 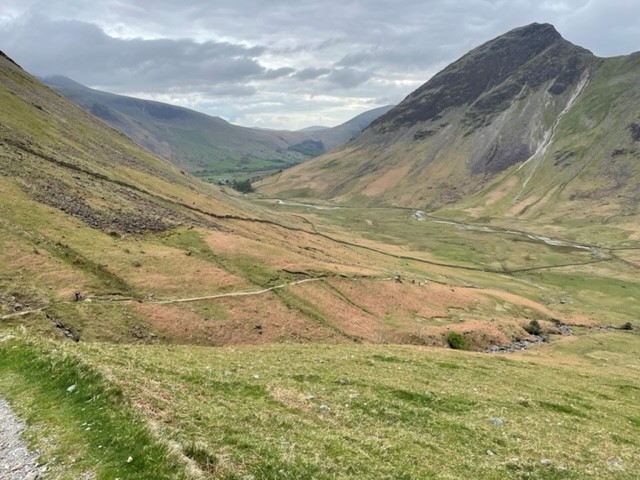 I must say, it was a great day out… tough at times… but that’s the enjoyment of the hobby! I’d definitely change my ascent route for Great Gable next time I visit, but apart from that, I thoroughly enjoyed it.

Many many thanks to all the chasers - your support is fantastic! And thank you to anyone who spotted me, phone signal on the mountains was shocking for this route!

Hello - I was very nearby ascending High Stile (G/LD-012) from Buttermere which I did by going up via Red Pike - steep but not climbing. Woody - the hound coped well with the loose ground and thankfully didn’t need carrying! I did listen on 2m but must have missed you. I tried 2m, 40m and 20m and had some big pile ups. 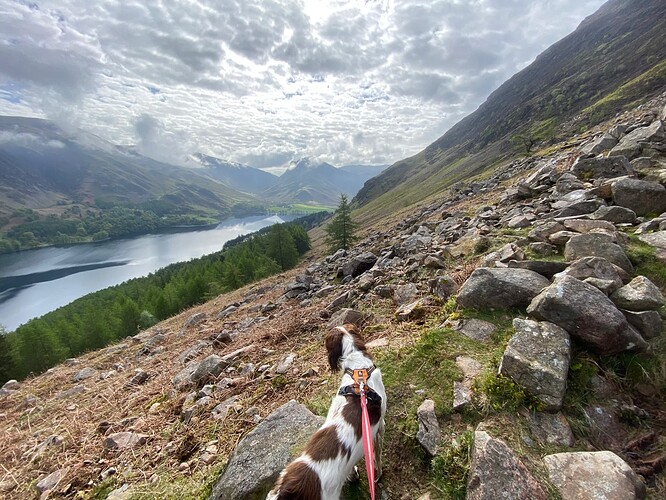 I need to try and learn a bit more dog psychology - for some reason every time I stop walking he barks. I think he has probably promoted himself to expedition leader and is intent on completing the route. For this reason I usually have issues with local QRM so apologies - it isn’t some strange feedback loop that sounds like a dog’s bark… it is Spaniel QRM… - still probably less bad than a Woodpecker… 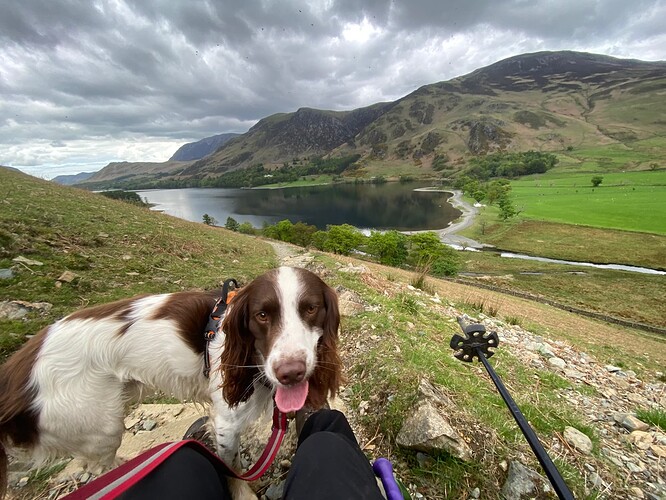 Thanks for the report, all three of the hills are on my “to-do” list - however I’m rather hoping to do them from the luxury of a camper parked in Wasdale rather enjoy the 3AM start…
73. Paul

Thanks for the report and photos Ben. HF bands were really messed up so I’m pleased I contacted you on one summit at least

Hi Ben, thanks for your great activation report and terrific photos.

Thank you very much @K6HPX Ken!

Good outing Ben! Looks rugged in places. Thanks for sharing your nice pictures too. They’re Cracking!

we were very lucky with the wx! High Stile is on my list of ‘to-do’s’, but this will be a summer time hike with the family. Nice to meet Woody on here, he looks to be enjoying himself. I’m sorry we just missed the qso, times must have not been in our favour! Next time I decide to do a big route, I will deffo be looking at a hotel, hi! Look forward to making our next qso!

Your very welcome @GW4VPX Allan, it was great to make contact from one summit! As you mention, HF was very up and down. Look forward to the next.

Wow, looks like another epic adventure! Thanks for another great report and photos. I was parked up in my car on Saturday morning doing a little bit of SOTA chasing and heard you call on 40m. Unfortunately by the time I’d adjusted the mobile whip to get the swr down to acceptable levels, you had moved on. Ah well - all part of the fun of chasing. Hopefully I’ll catch you next time.

Good luck on your next outing!

Wow, what an ascent of Great Gable. It’s far easier via Green Gable, but then Paul G4MD and myself were only on for a 2 summit day. We missed the path descent to Kirk Fell and did a scree run descent instead. All good fun, but rather time consuming.

I see you’re getting into the 4+ hour drives before ascending these summits. How long before you make it a 2 or 3 day outing and stop over using the Travelodges? It certainly made good sense for us.

Hi Geoff, many thanks for your kind words.

Nice one Ben and thanks for the contacts. best 73

Thanks @MM0EFI Fraser - it wasn’t as high up as the three mountains we completed, but the first steep climb was hard work.

Hi Matthew, many thanks for the kind words - it certainly was an epic but hard going adventure. Sorry I missed you on 40m, I did put quite a few calls out, but the band seemed very quiet. Deffo look forward to working you on the next - I’m planning a G/SP route for this coming Saturday, so will listen out for you there

Hi Gerald, I wish I’d of chosen the alternative route and bared left diagonally up the side, but you live and learn! It was a great experience, and yes… the descent down the steep scree was challenging with a lot of loose stones. Lovely summit with great views when you reach the top!

it was a 16 hour day, so yesterday was a slow day, hi! Look forward to working you soon either from a summit or chasing.

but you live and learn!

I see you opted to return via Black sail Pass rather than the scree slope down from Wind Gap! Probably a good choice; so you’re a quick learner

rather than the scree slope down from Wind Gap!

I remember (oh boy, do I remember) walking from Seatoller to Black Sail via Windy Gap some mumble years ago… 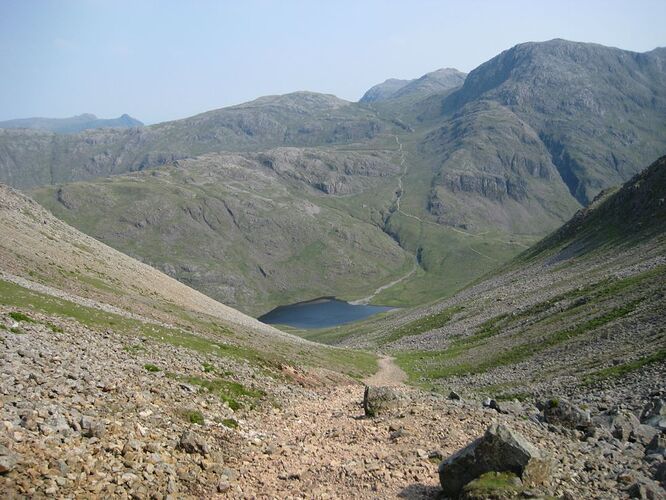 LookingBackDownToStyheadTarn983×737 139 KB
The weather was fine. I didn’t take any more photos 'til we reached the col, for fear of sliding back down…

phone signal on the mountains was shocking for this route!

I remember Ennerdale being a coverage-free zone, and even quite high up it could be a matter of a few feet one way or the other making the difference between signal and no signal. I guess it hasn’t improved much in the last decade or so.

Thanks Allen, was great to work you! Look forward to the next.