We had a splendid trip and activated 9 of the 10, 10 point Gran Canaria summits (plus winter bonus points and maybe other summits to follow), We stayed in the mountains in Tejeda in the fine Casa del Caminero; info@armandogil.net

One of the activations was a first activation, and I can confirm that Roque Nublo (EA8/GC-002) is a technical sports rock climb to get anywhere near the activation zone. The first photo (credit; Ann MacDonald) shows the starting moves, not helped by the lightweight rucksack containing my mobile shack (despite minimising the radio gear) and a couple of litres of water, plus sun cream. 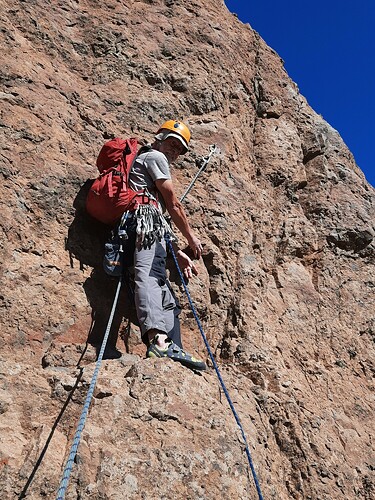 Climbing progress was slow but steady. The peak attracts a large number of tourists so there is the local embarrassment of failing to get up the route (if I had failed then this reflector report would not have been written!) 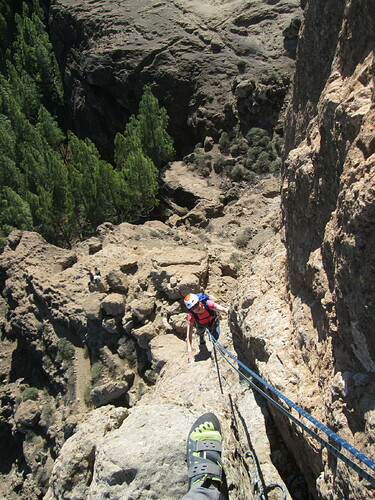 The top of the first pitch (40 metres up and shows the steepness of the Roque) with my left green climbing shoe and my faithful second, who now seems to be smiling, but by then so was I! This was not the case when we started. Note the many tourists below (more of that later). The Roque is 68 metres high (apparently) so you need to get 43 metres up to reach the activation zone!!!

The climbing difficulty eases just above the first belay and the summit was large enough to set up a 20m/40m EFHW and the faithful FT817 (Credit; Ann MacDonald). Thankfully the minimal radio gear was all there and worked, nothing forgotten! The mobile phone network is pretty good in Gran Canaria and I was able to Spot myself, resulting in 6 QSOs on 20/40 metres SSB to activate the summit (EA8/GC-002). Coming from Scotland I have to say that it is rather splendid to gain winter bonus points, in shorts and a t-shirt! 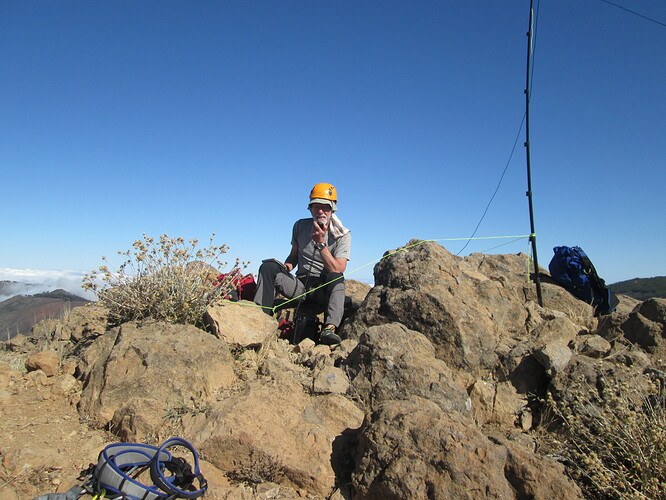 Success, but there was still the need to get back down. There were hordes of people walking around the foot of the Roque. There is so much loose rock on the top that I was terrified I would knock pebbles, stones and rocks off to the detriment of the people below. This was a major concern and my knowledge of the Spanish judicial system was not positive. By shouting down I was able to persuade the sunbathers and dope smokers (I imagine) to move away from below our planned abseil descent. We downclimbed a few metres and had two abseils; the first was quite short (maybe 15
metres?) and the second a free abseil of 40 metres from the belay point. Luckily all went to plan; we got down safely and (as far as we know) no one died! 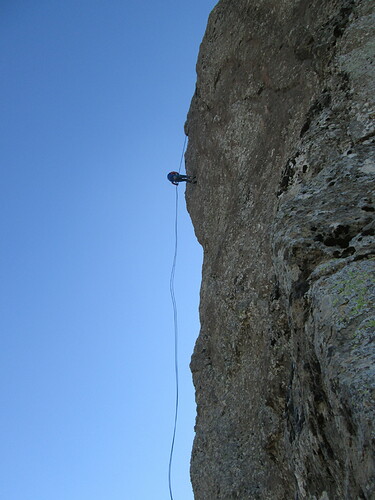 Our training shoes, spare clothes and extra water were still where we had left them, and as someone offered the final image was just after the event. The route follows the right hand edge of the roque!

Don’t they look pleased with themselves! 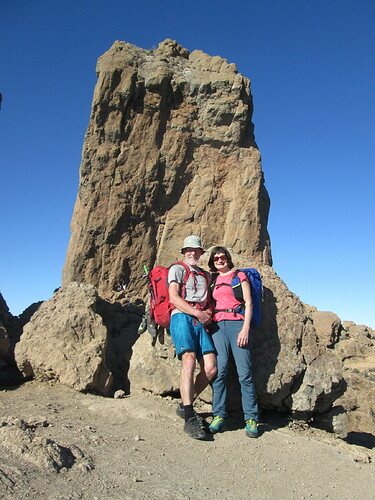 If you have some climbing experience then I understand that there are mountain guides and others who are available in Gran Canaria to help to get you to the top. The route is very well equipped with epoxied security bolts and abseil stations. I cannot imagine better gear anywhere so it is a relatively safe climb.

Thanks for the report and the great photos, Colwyn!
Congrats on the great achievement

Congratulations Colwyn and Ann for the first activation.

Which route did you do? What was the difficulty (UIAA or French grade) ?

Thanks for the report Colwyn - great to see this one activated legitimately.

Next vacation Madeira?
Your skills could enable the first activation of CT3/MI-003.

Different skill is required for the other unactivated summit!!

Well done, Colwyn. It looks a nice route, not too technical and finishing at a summit, just the way I like them! Though its a sport climb it looks as if there is an adequate supply of protection placements?

Thanks. We climbed Roque Nublo by the Via del Alemána, graded French 6b+ but it seemed somewhat harder to me!

Thanks. Well it felt pretty technical to me and I would have been happier with even more fixed protection! 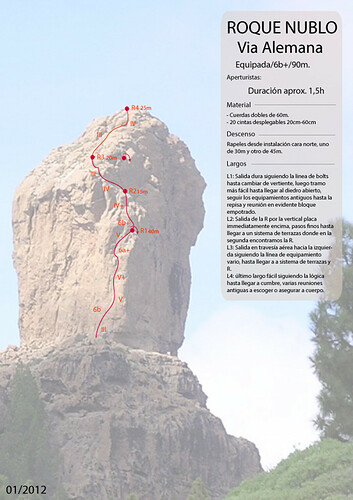 Next vacation Madeira?
Your skills could enable the first activation of CT3/MI-003.

We have never been to Maderia, but interestingly we did consider going to the Portuguese island as there are direct Edinburgh flights, or there were! However, as Gran Canaria is 5 degrees latitude further south the XYL chose here as it would be warmer.

please give us a break, we are still recovering from climbing Roque Nublo!!!

However, we did reconnoitre Roque Ventaiga (EA8/GC-008). The rock is not good quality and I could see no way to safely access the north face where there are rumoured to be some climbs. There were goat tracks but no jokes about mountain goats please! No one was able to give any details of the climbs and neither the 2011 nor the 2015 climbing guidebooks included them. I suspect they have not been repeated for many years as the site is of archaeological importance with restricted access. Well worth a visit though. Best bet might be to charter a helicopter at Las Palmas airport and get dropped off?

I’ll leave this first activation for the next person!

leave this first activation for the next person

No thanks, I’m not a sports climber.

All those tourists watching would have made me super nervous

6b+ with radio gear in the rucksack?
Chapeau bas, Colwyn