A boat, a SOTA activation and some sight seeing on Bardsey Island

A report from the SOTA activation of ‘Mynydd Enlli’ GW/NW-072 on Bardsey Island:

It was promising nice weather in Wales for a period of two weeks, so I thought now is my chance to take the family over to Bardsey Island to activate the SOTA summit of ‘Mynydd Enlli’ GW/NW-072. I also decided to invite Allan @GW4VPX because I knew this was on his ‘to-do’ list and we always have a great time when doing a joint activation

We met up with Allan in a car park just above where we were going to catch our boat. Got all our gear together and loaded up. It was a nice brisk walk for approximately 1/4 of a mile to meet Colin, who was taking us across to the Island on his boat: 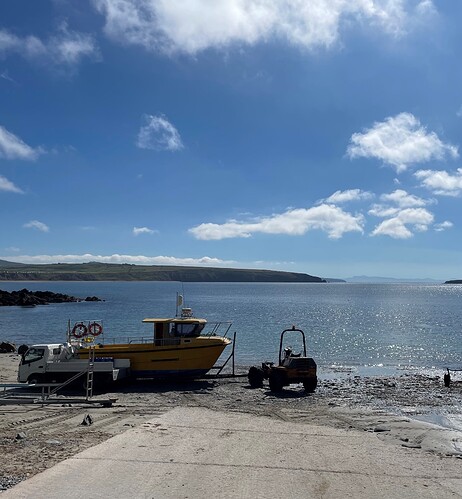 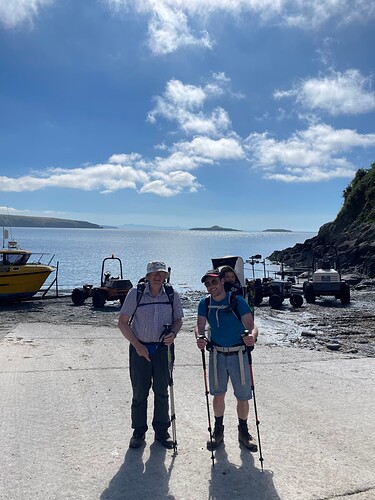 The sky was blue, the sun was shining down, the sea was calm and the company was great - what more could you wish for on a SOTA outing!
As we approached the Island of Bardsey, you could see ‘Mynydd Enlli’ standing tall and looking very hot on top: 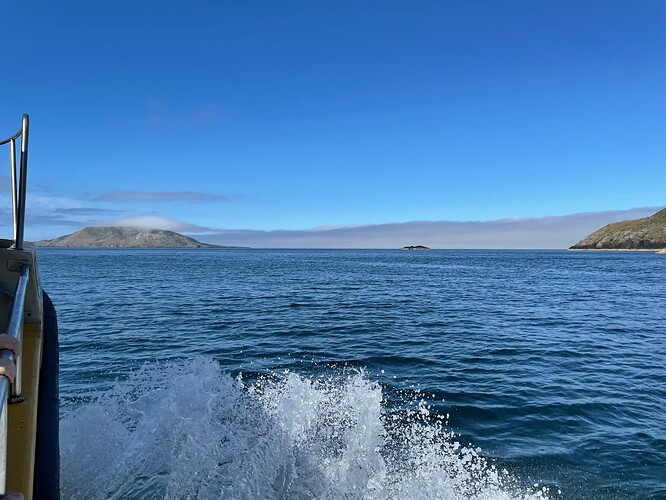 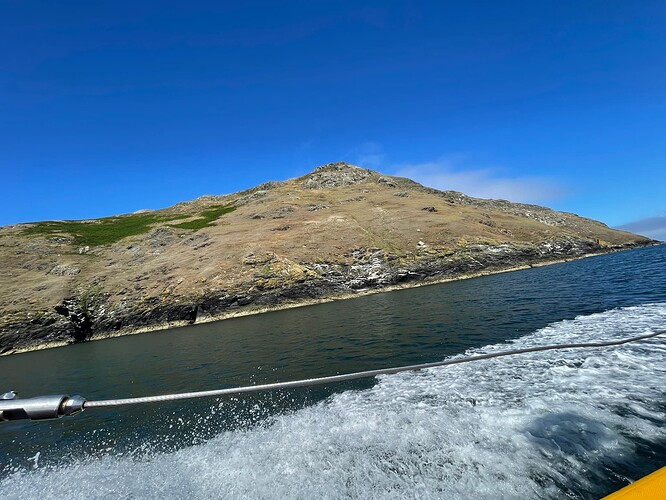 We arrived on the flat part of the Island where Colin hoisted the boat up on a trailer using his old Terex dumper. We only had 4 hours to spare due to the tide, so it was off the boat and go go go: 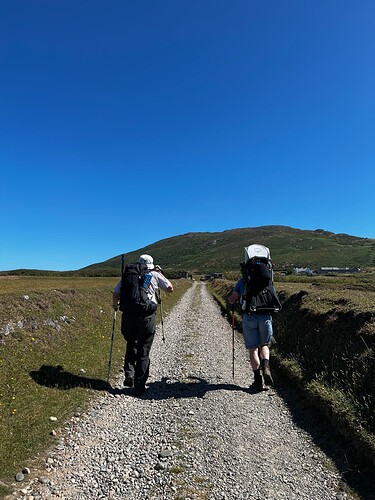 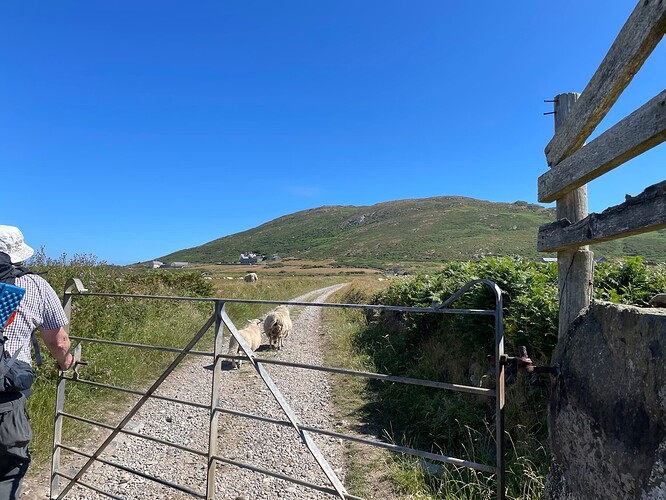 As per normal Allan and myself had plenty to talk about while little Lyra was singing away in the carrier and Martha taking photos of the lovely views we had.
It was a steep pull to the top, especially with over 20kg on your back

, nevertheless, me and Lyra managed to push our way through and waited for Allan and Martha near the top: 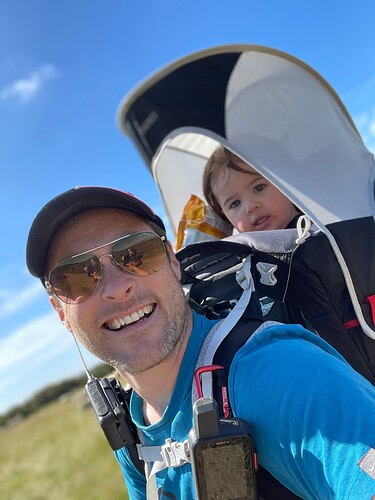 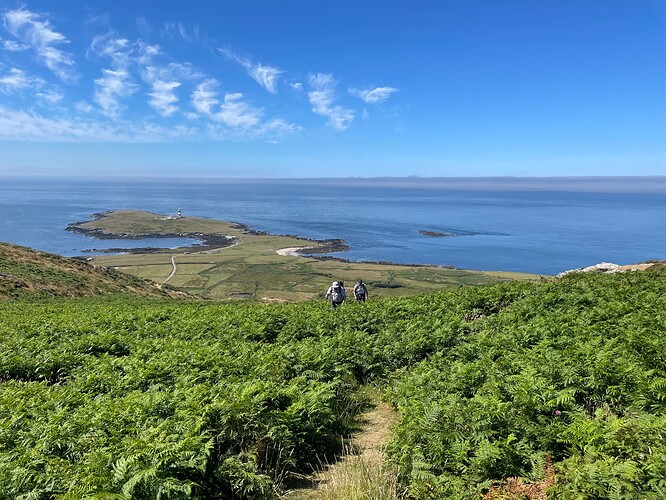 Wow, what fantastic views we had once reaching the peak. It was certainly worth the climb! 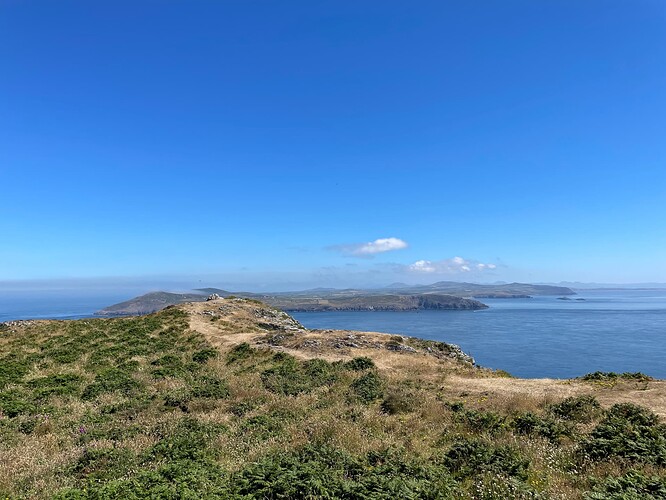 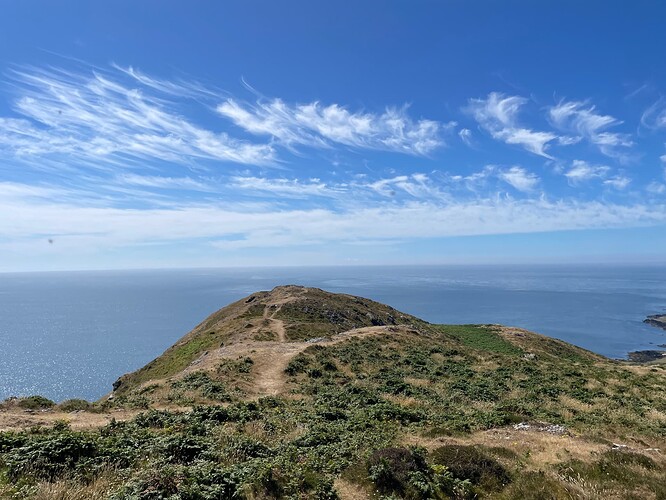 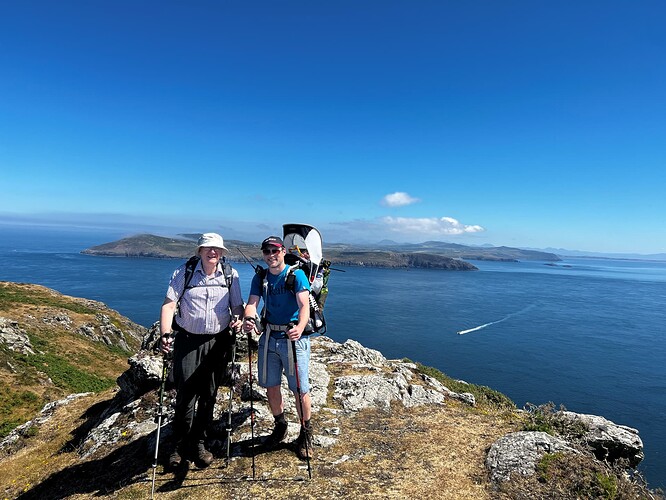 Once we had finished taking the views in and put the cameras down, it was time to set up our SOTA stations. Allan set up his EFHW to operate on 60m with his Elecraft KX2 and I set up my linked di-pole for 40/20m using my Xiego X6100 with my slim-g also attached for 2m FM connected to my Yaesu FT-65e hand-held. 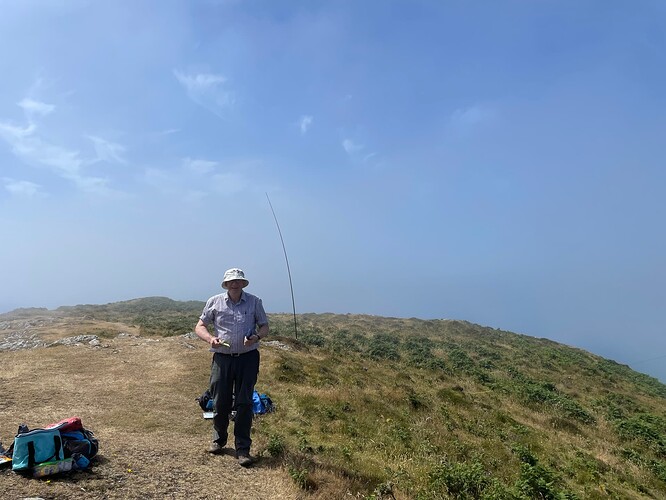 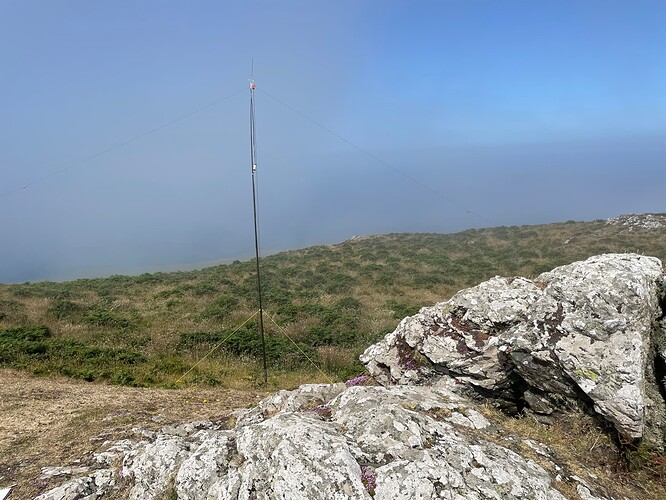 To begin with, Allan joined me and we began by sharing the mic doing a 2m FM operation. We chose a free frequency, put a CQ SOTA call out on S20 while spotting ourselves, QSY’d to the chosen frequency and managed to work 13 stations itl with 3 being S2S stations (thanks @M0JKS Dave, @M7BIA Martin & @MW0WML Gerald). 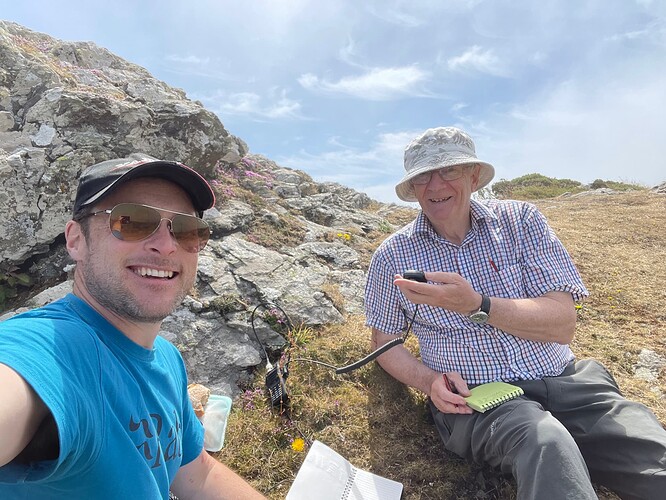 As I finished working everyone on 2m FM, Allan went over to fire the KX2 up and put a call out on 60m managing to work a further 12 stations. In the meantime, I switched over to the 40m band and made another 21 contacts with 1 being a S2S, thanks @M1EYP Tom

we really enjoyed ourselves, conditions were on our side! I did move over to the 20m band but strong contest stations were knocking me out, but I did manage 2 contacts!

With two large smiles on both our faces, we shook hands and started to pack away. A great activation had, spoke to many supportive chasers and qualified the summit. It was now time to make a move before the mist arrived!
Once reaching the bottom, Allan treated me to a coffee and an ice cream! It was my lucky day, hi!

It was now time to do some exploring before leaving the Island. Little Lyra really enjoyed herself and managed to see quite a bit of wildlife which including Puffins… Seals… even sheep! And many other breeds of birds. 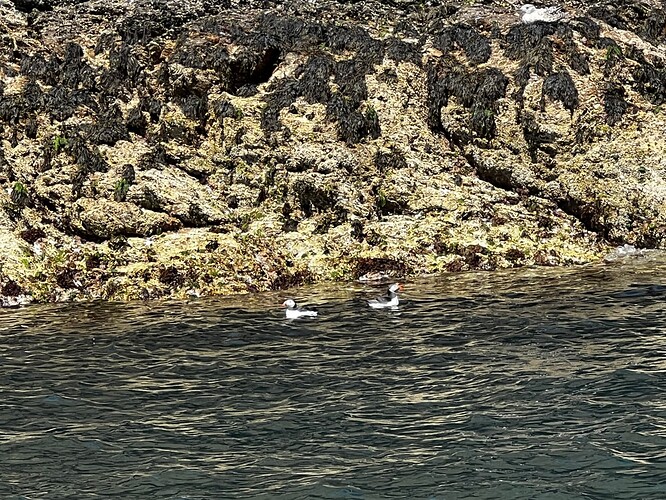 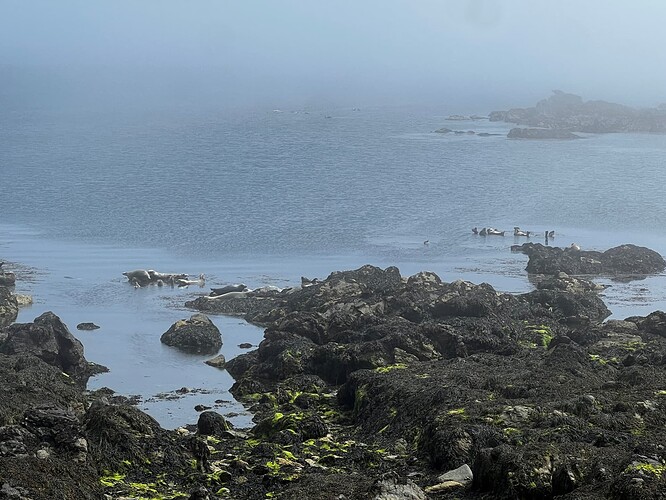 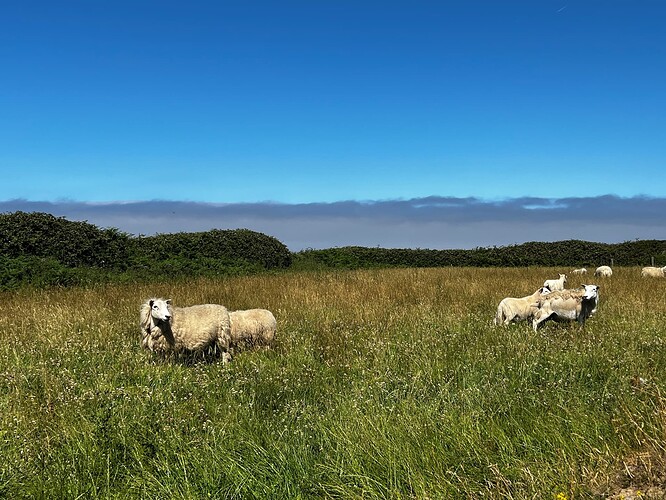 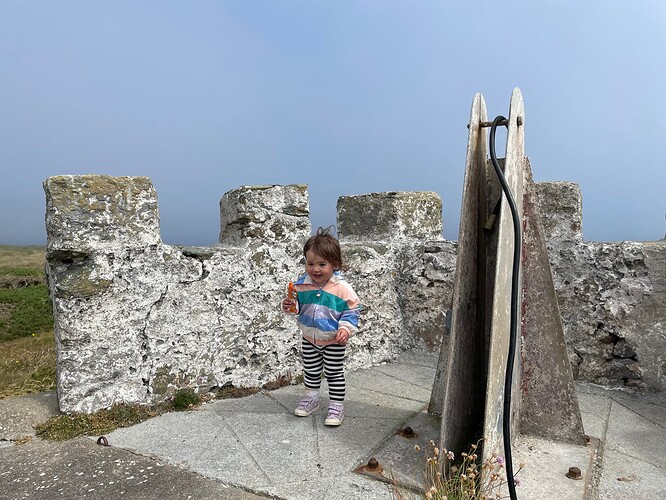 We visited the Island at the perfect time, as we were leaving the lighthouse, the mist really did come down! Never mind, we were just about to board ship and leave for the mainland. Looking back, you would never of known the Island existed being covered by the mist: 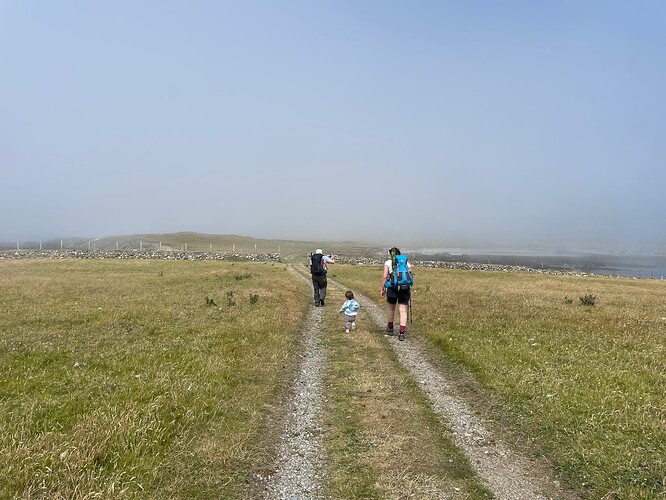 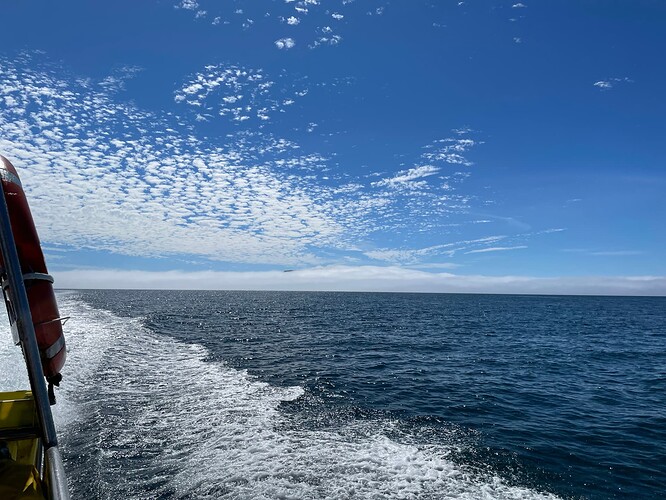 I’d like to thank everyone who called into Allan and myself yesterday. Great support as per normal

Also thank you to all the S2S stations who worked us - much appreciated! I hope you enjoy the pictures above.

Well done, gentlemen! Quite an effort to gain one point. Thanks for the fb report, Ben.
Once again, I’m shown how amazing activating in Gx is compared against DM.

Excellent Ben/Allan. Very well done. Any SOTA activation that involves a boat trip is my idea of paradise (well, almost!)

Looks like a fun trip - great photos, and it was good to work you both on HF

I suspect young Ben is developing a taste for portable operating situations that involve a boat. Alisa Craig GM/SS-246 next Ben?

Nice report and photos Ben. If the cottages are still available for hire, its a great place for a stay.

Cheers @DG7ACF Pom! You’ll have to come over to GW land soon

yes, quite a journey for a 1 pointer, but great fun!

Well done on an excellent outing. I had serious noise problems at my end (weekends are often like that) so wasn’t able to copy on either 60m or 40m.

Your photos brought back memories of 2009 when 6 of us were on the summit. That was a very pleasant outing and one which I’ll never forget. Operating in close proximity to the sea is always something special.

Thank you very much @MM7MWL Mike. I’m beginning to enjoy my boat trips with an activation at the end

hope your keeping well! Look forward to our next qso.

Thanks Ben. Crossing water certainly adds a special dimension to activating. Illness has meant I can barely cross the street at times but recovery is under way now snd the activation bug is biting hard again. Keep up the great work. Hope to catch you again soon. Vy 73. Mike

Thanks @M5RJC Rick, you were really strong to me on 40m. Conditions were good for a change

Well done lasses and lads! Great wee adventure and some nice weather to go along with it.

You’re becoming something of an island specialist Ben. No film crew this time though.

I certainly am enjoying operating on Islands

especially when we have good wx! I’ve been eyeing that summit up, funny you mention it! We will see if I can fit it in before summer end, hi. Good to work you @M1EYP Tom

Thanks @MW0IDX Roger. I’d love to spend a good few weeks there, very pleasant and quiet. Although, I bet it’s cold and rough in the winter months!

Thank you very much @G4OIG Gerald. The 40/60m bands haven’t been working the best lately, but 40m was on my side this time. It was a pity you had noise, would of been great to make the qso.

Your quite right, there’s something relaxing about operating by the sea

we definitely won’t forget it, great day out!

It certainly does Mike. Well I hope you recover soon, I look forward to hearing you on the mountains again

Thanks @MM0EFI Fraser, it certainly was a great wee adventure. Allan must of enjoyed it, he even dipped in his pockets and bought me an ice cream

No film crew this time, they take too long to set up, hi! You know exactly what I mean, haha.

Hi Ben and Allan, thanks for sharing your activation report and photos. You look like you really did enjoy the day. Well done.

Nice report Ben and nice piccies, What a gorgeous little princess you have there. Thanks for the contact mate I’m only sorry I couldn’t manage to get Allan too.
Best 73

Hi @VK3SQ Geoff, many thanks for your kind words

it certainly was a great day out!