A basic transceiver, a bit of wire and two hills

Sometimes you need a little break away from something to realise just how much you miss it. Sometimes it’s through boredom, sometimes though lack of perceived time, sometimes through circumstances beyond your control. I think for me it was a mixture of all three.

To get to new summits that I haven’t activated before I need to travel and have at least an overnight stay somewhere. My last activation was last August (2017), one of only 13 activations for the whole of the year, the lowest number since my first year.

Back end of last year I started playing with FT8 and quickly configured a Pi-2 (and touch screen) to use the mode. Christmas brought me a Pi-3 and I soon had that configured to use various modes. This was my way back into radio. I then needed a new project, something that would get me back on hills in some form.

A couple of years ago I purchased a MST ssb transceiver kit with the intention of using it portable. I got as far as completing the main board but stalled at the fabrication of a suitable box and it was put to one side; still not finished it. I saw an advertisement in January for the CS range of transceiver kits (with the attraction that it was complete with box) and thought that would be a nice useful project.

I made an order for the 40m version and a bag of bits soon arrived. It didn’t take me long to have the VFO built and operating; I documented my progress on Twitter. Over the next few days the kit was built and each stage was aligned and tested. I did one small mod by adding one of SOTAbeams audio filters before finally finishing the kit. 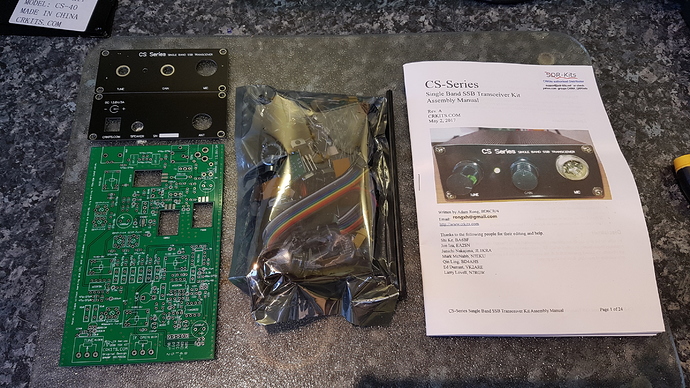 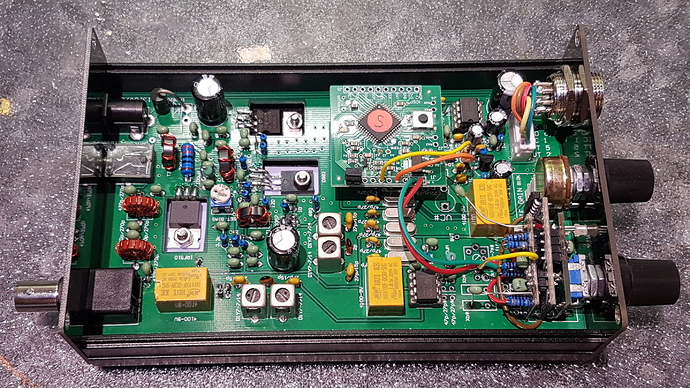 I soon made a few contacts with the transceiver and its 8W from home to confirm that all was well and patiently waited for time and weather to coincide to take the unit out on a summit.

The forecast for the Easter weekend was not looking good but I had alerted to try for the EU/VK S2S attempts which would have been my first activation of the year. Waking Good Friday morning and seeing that it was dry and the forecast for rain only in the afternoon prompted me to go out and at least try one hill with the new transceiver, after all that is why it was built.

Helen and I wanted to get out and do some walking so a combined ramble, geocache session and hill was hastily decided on. Aconbury Hill (G/WB-024) was chosen as it’s not too onerous or too far away from home bearing in mind that anything could go wrong with the transceiver, antenna or propagation.

Aconbury is an old hill fort with a mostly indistinct ditch and embankment around the summit remaining. The summit has a trig-point and is covered in large trees which could be used as antenna supports however I was going to use my trusty ¼ wave vertical. 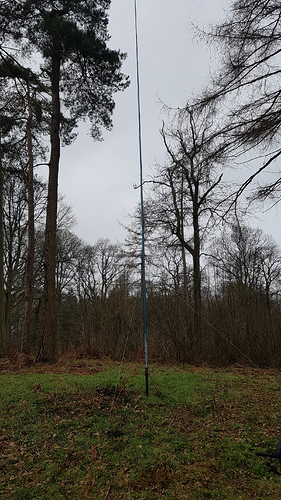 The 40m band didn’t sound too lively but there were still stations at good strengths to be heard. The little CS-40 transceiver is a back-to-basics rig with no frequency or signal strength display so reports were given subjectively. A self-spot was posted and soon my first chaser was in the log, good start. After 5 contacts I handed the mike over to Helen so she could make a few contacts for the activation. After her 4th qualifying contact the band went quiet with QSB. I then called again and worked Helen’s last contact (in Orkney) then decide to see if there were any other summits being activated. The first one I found was HB9EIZ/P on Bachtel (HB/ZH-004) for the first S2S with the new set-up. I then found OK4KOP/P for a difficult second. On returning to my original frequency I was then called by DL6FBK/P on Hummelskopf (DM/BW-845) for my third S2S. I finished with 12 contacts in all. I think that was a successful first activation with a low powered home-built transceiver. 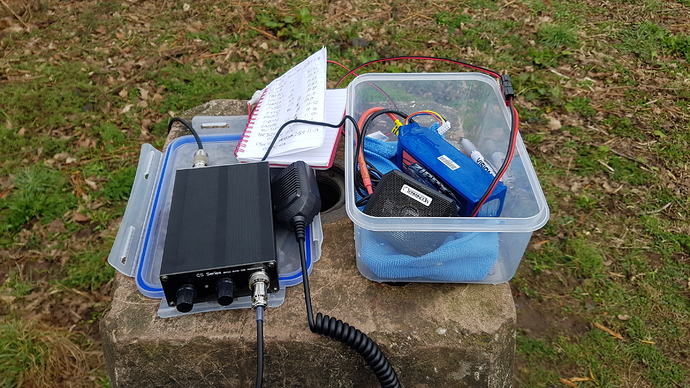 Rain was forecast for just after lunchtime and we planned to be on our way home before it arrived. We finished our walk and the rain hadn’t appeared. I didn’t plan on a second activation so no hill was organised. We decided to do my least favourite WB summit Hegdon (G/WB-023), a summit that has no accent to speak of, unless you want to be a purest and walk from lower down; I can never see the point of doing that, I have done plenty of summits that have taken hours to ascend to compensate. A quick 6 stations were logged. The final one was a nice chat with Euan moored on his boat in Shetland using the call MM0VIK/MM.

So as you can see I have set myself a couple of challenges. Do some of the Welsh biggies with only one band and home built kit (the original idea) and now re-do all the WBs, which I have started accidently to activate in reverse number order by doing WB-024 and 023.

I can think of few more pleasant SOTA activities than revisiting the G/WB hills with a home made radio. I’m also redoing the WBs in relaxed style.

Thanks for the contact on Aconbury, Carolyn. Was in town so missed Hegdon (which I share your distaste for). Hope to catch you on WB-022 etc if you are counting down.
73,
Rod

Hi Carolyn,
well done on making so many contacts including S2S with the homebuilt rig. I recognise that rig I built it in its first generation design as a 20m KNCV-7 or something like that, trxcvr. That generation had a VXO rather than the DDS module that I can see you have in the rig. The receiver was very sensitive but not very selective.I still have the rig somewhere in a box, I’ve used PSK31 through it but now with FT8 being so popular and it’s limited tuning (in my version) it might make a nice portable FT8 station.

I’ve done them all at least twice. But for now it feels like I’m starting all over again.

Thank you for the contact Rod, sorry I missed you on the second one. It will take a bit more travelling but I’m going to do the count down. Extra motivation :o)

It is the old KN-Q7A updated a little with what they have called a “Sandwich digital VFO” which gives full band coverage from 7.0 to 7.2MHz in either 1kHz or 100Hz steps. I’ve found it to be more than sensitive enough and didn’t feel the selectivity to be too bad. I have however fitted one of Richard’s filters so that might be why I’m seeing no issues with the receiver.

Ah… I remember you and her from a long time back

Having QSOs on something you built yourself just turns the fun factor up to 11.

You could always be a bit OCD and do the WBs in some kind of geometric progression instead. Just saying…

Interesting. Either Vicki is going to be dispatched out of the AZ with another 6cms TRX or you have recruited another 6cms operator. Spill the beans Rod!

It is the old KN-Q7A

Yes that’s the one Carolyn - my kit came from the designer in China and I ordered the changed parts with it to build it for 20m rather than 40m. I see yours came from SDR-Kits so it looks like he now has some distributors. Does it still have just the one surface mount component to install or has it gone all surface mount in the meantime? I believe with your model the DDS unit audibly clicks or something to tell you what frequency you’re on - I’d still prefer a display. For something one builds oneself, as long as you don’t wind the bipolar toroids in reverse (as I managed to do), it’s a good feeling when it works and you get your first QSOs on it.

Interesting. Either Vicki is going to be dispatched out of the AZ with another 6cms TRX or you have recruited another 6cms operator. Spill the beans Rod!

As you know, Andy, Vicki being M6 precludes the first option. With that in mind I did consider 3cm but thought better of it. Hereford ARS has several 6cm UKAC contesters. I will be joining them (possibly on a SOTA summit if the planned design actually works adequately) and also hoping one or two of them will chase the odd WB, SW, MW hill for me.

It is very satisfying to build and operate home-built kit of any sort, including the antennas, and to work stations QRP-ish ssb just adds to the achievement :o)

I’m not obsessive enough to do a fancy progression but it would cut down the travel time!

It still has the single surface mount device all the others components are leaded, nothing difficult to assemble.

You now work out your operating frequency by observing a tri-coloured LED giving reference points and counting the number of steps when the encoder is rotated.

When I first had the transceiver up and running I thought it was way too basic compared to the kit I usually operate but I now appreciate its simplicity.

This is one of the best threads that I’ve read in a while!

Congratulations Carolyn! Having QSOs with home soldered equipment is the pinnacle for me - how can you top it?

My problem is that I need the ‘first QSO’ fix. You can only do that once with each rig! Yes, I admit it, I have a problem.

As you know, Andy, Vicki being M6 precludes the first option

I know what you mean about the “first QSO”. The first go with the transceiver I had 4 contacts from home with it and got a buzz in getting, what would appear to be a random set of components, to work together to communicate with someone else, via radio waves that I had generated from something I had built.

The thing I enjoy doing is getting a system reliable enough that I can be confident that it will operate correctly when somewhere remote. I need to get out and play with it some more

The thing I enjoy doing is getting a system reliable enough that I can be confident that it will operate correctly when somewhere remote. I need to get out and play with it some more

I am now on my third setup for the 6cm gear; the first shorted and blew up, the second is a bird’s nest again but does at least demonstrate functionality and the third should be a compact job suitable for decent sized hills. However, it is modular, so none of the satisfaction of putting individual components in place to create a working radio.

In the shack I could probably manage the lack of frequency display; on the hill I suspect the whole activation would fall apart.

Hope to catch some more contacts from your simple but effective new gear.
73,
Rod

I thought you were just being provocative

Interesting note on 3cm.
Happy to continue this discussion; do you want to move it to a new thread?
Catch you on SS-049 later?
73,
Rod

Hope so… we had a bit of snow last night and the forecast shows snow for Biggar at 700am. So I may divert to something less serious depending on what things look like once I get out. Just finishing my porridge, can’t climb hills without porridge.

but I’m going to do the count down. Extra motivation :o)