A 2 pointer two day hike, what?

What? A 2 pointer requiring a two day hike? What the h…?

It all started after waiting for the weather to improve and do my first activation in 2021, as it’s been snowing last days.

I went out for a SOTA some days ago and returned home when I found a lot more than I expected; no way to do it safely.

But this time WX forecast was okay with a sunny window, and decided to go to a SOTA close to Pamplona, my hometown, for an afternoon activation, ref. EA2/NV-132.

Why a two day hike then? Let’s see…

The climb
Activation date: January 7th 2021.
The route is an easy and beautiful path starting in the village of Oteiza, going up for 2,5 km with a height gain of 315m, for a final elevation of 854m at the summit.

There wasn’t much snow at the beginning but some patches and a bit of mud, but being temperature about 3 C it wasn’t a big issue to walk through. I found some horses on my way up; they’d play an important role later on… 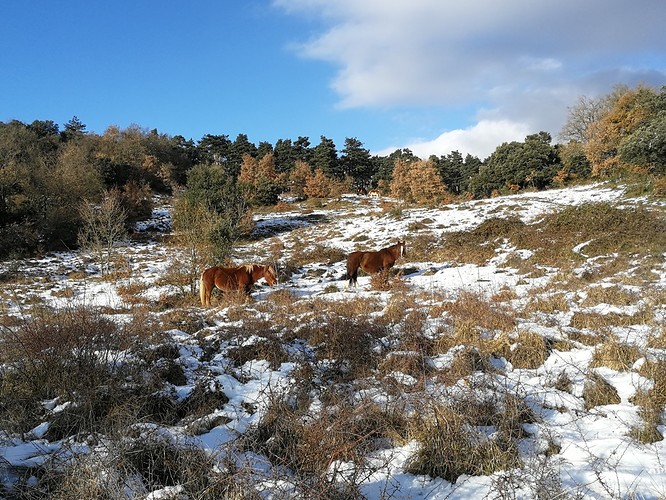 The last part is much steeper. I had to walk with care not to slip with a thicker snow layer and ice. A look back revealed my QTH and the summit of Mt. Ezkaba EA2/NV-119 left hand side: 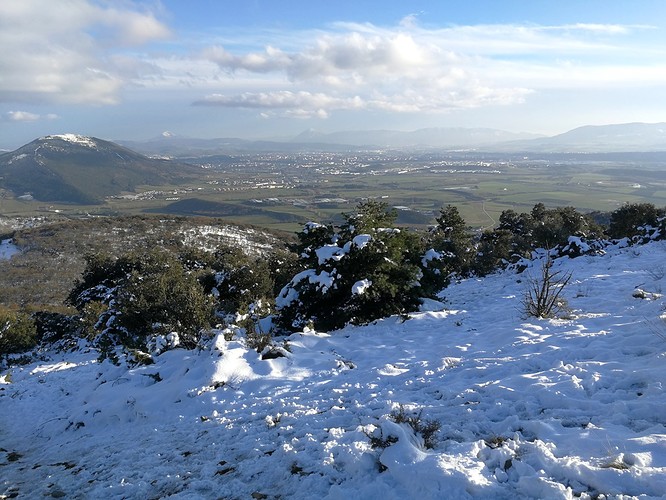 After about one hour walk I arrived in the summit. It is a nice area pointed by a geodetic vertex at the trig point: 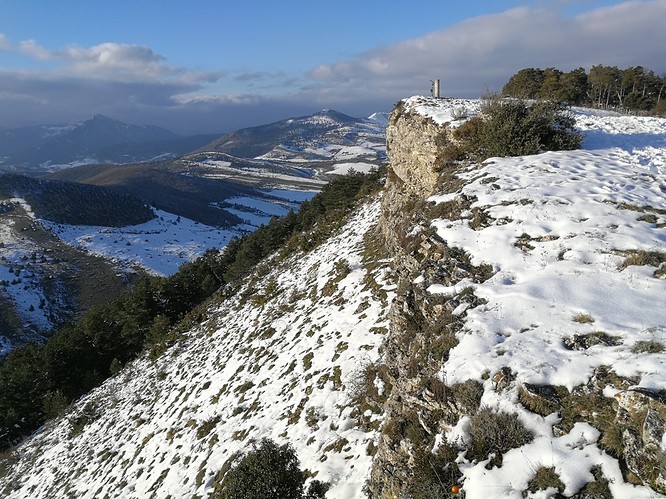 As expected the breeze made the temperature feel like subzero. I decided to extend quickly my pole just supported in a side by a little tree and deploy the 20-30-40 EFHW antenna inverted vee, oriented NW-SE, with the end of the slope pointing west at the feed point allowing max radiation towards NA, optimal for that time. 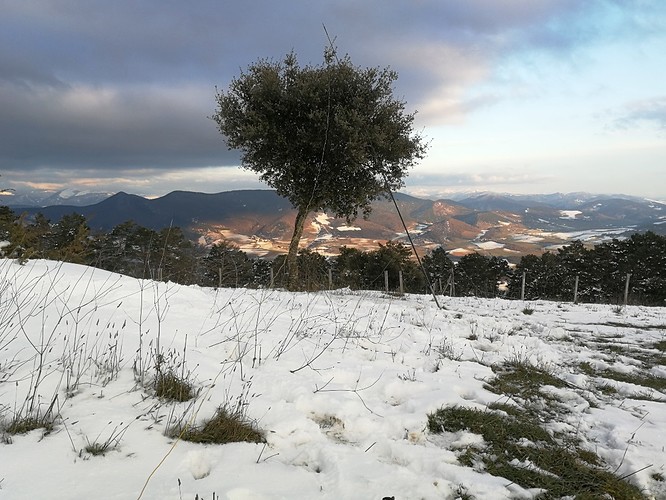 Bearing in mind this woulld be a short activation, CW only, I brought my MTR-3b rig, installed my EFHW coupler, tuned for minimum SWR and started my CQ call at 15:50 utc. 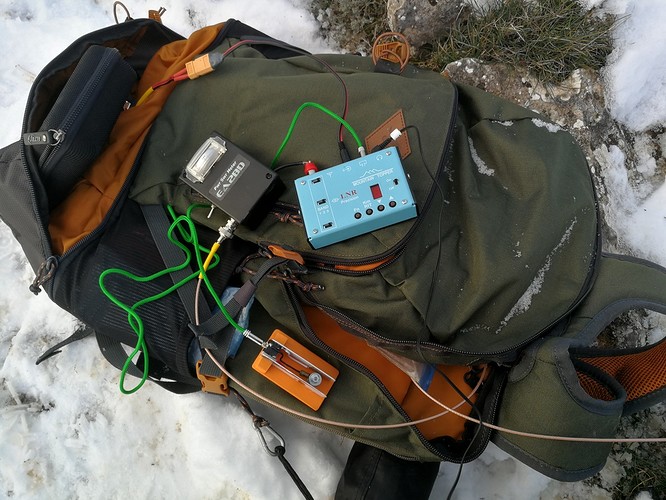 After a few calls and a spot by RBN I got a couple of calls from EA2DT and F4WBN, but next I took my breath while hearing John K6YK (CA); very happy to log a DX with this tiny rig!

EA2DT was next and he announced me I had a S2S near my frequency, thanks George. I’ll try later.

Bob AC1Z (NH) came next, and Fred KT5X (NM) followed him. Wow, I was so glad, by looking at the antenna, barely up in a sub optimal configuration, with my wire running closer to ground than usual!

I had some difficulties to keep my earbuds in place, the wind was blowing harder now, and to my surprise some of the horses arrived in the summit. They carried bells and it was disgusting to hear them walking around and making noise.

I concentrated, called a couple times but no one else replied, and decided to qsy briefly to find VE2DDZ activating VE2/LR-059. He was there, low but clear. I started calling S2S with no success, when suddenly my rig jumped and the antenna wire stretched out, what a shock!

I turned aroung and found some of the horses loooking for food next the antenna and one of them just walking next my aerial, which had displaced tensioned by the animal and my pole fall over ground.

In a hurry I held my gear, disconnected the feed point and found my tuner loose; I’m glad I decided to use a RCA connector which saved my coax from being pulled from its connector.

The horses moved forward and I could raise up the pole again. What a bad luck!

I switched on again and tune, to find Malcolm working the pile up. I thought it would be difficult, and returned to my own frequency to call cq again. By the time my fingers were numb, and I couldn’t feel them by the tip, therefore pressing the key was a bit nasty and less than precise.

After calling alone I decided to give the S2S a second oportunity, and qsy’ed back again.

This time Malcolm heard and asked S2S? We could complete our qso and I closed my rig after 20 minutes on air, thanks Malcolm, good ears! 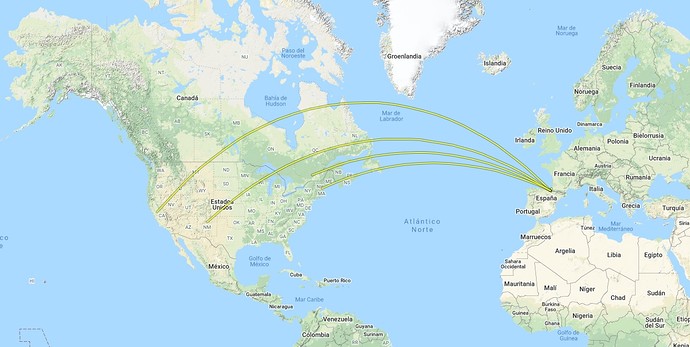 By looking at the RBN spot page I think I settled correctly my aerial, most spots coming from NA: 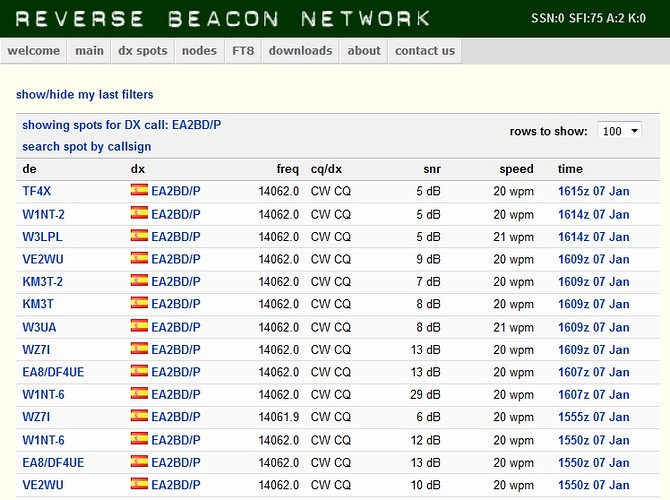 I would have desired being activating for longer, but my fingers were bad and I looked at the sun hiding behind a dark cloud and reasoned how the way down would be, so I grabbed everything and called it a day. 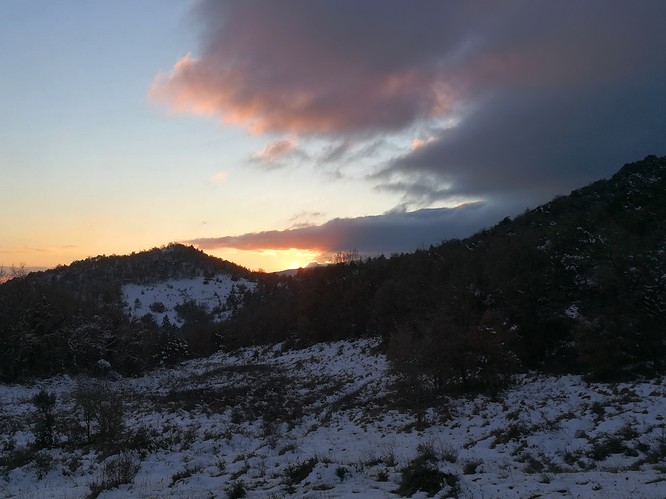 It was dark when I arrived in the car. When I touch my pocket to get the car’s keys I discovered with horror that my wallet containing my ID card and driving licence were not there: oh no, they probably were still up in the summit!
It was late, I felt so sorry and got back home driving desperately. So bad, after a nice activation…

Day 2: the search
That’s why I got back again to the same summit the next day, after a bad night. I walked looking the floor carefully. I was afraid one of those damned horsed had perhaps chewed my wallet! 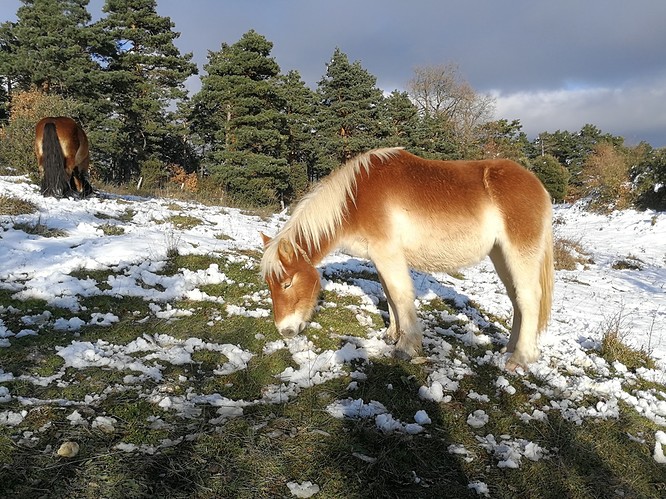 I arrived in the summit, and approached the point where I activated. To make things harder, my cards were in a small white case, great to hide over the snow!
To my surprise, after a carefull inspection of the area were my backpack laid over ground I discovered the wallet appearing on the snow: 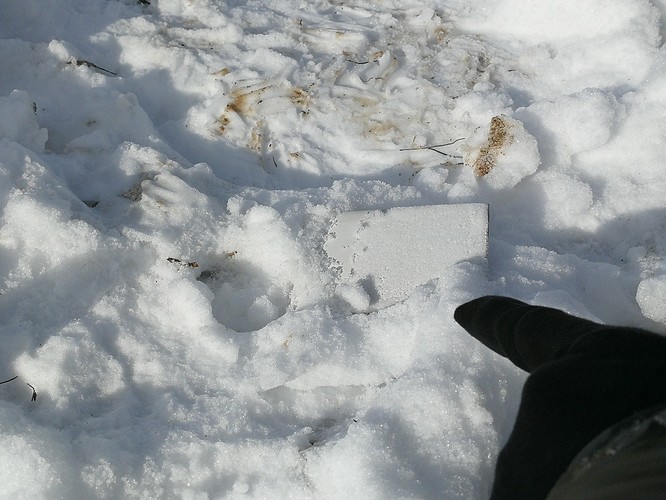 It seems my wallet fall while I was taking my glasses and I probably put my backpack over it. Being that white I didn’t notice when I left the area the day before. I was really glad for having recovered it, and no needing to renew the cards. 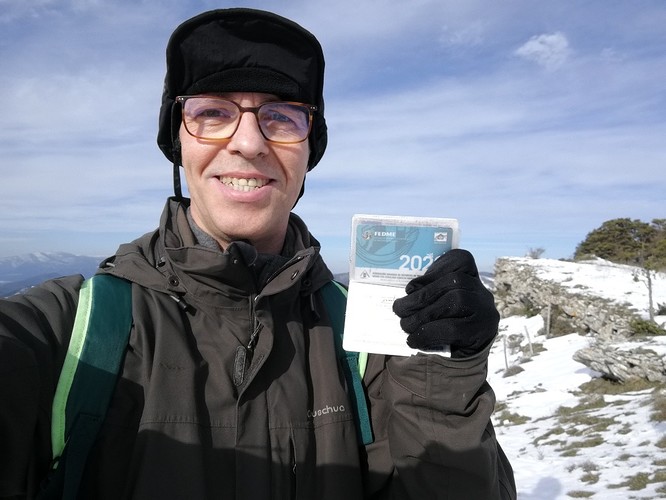 Is there any bonus for a two day winter Sota visit? I returned home enjoying the views towards the snowy Pyrenees. 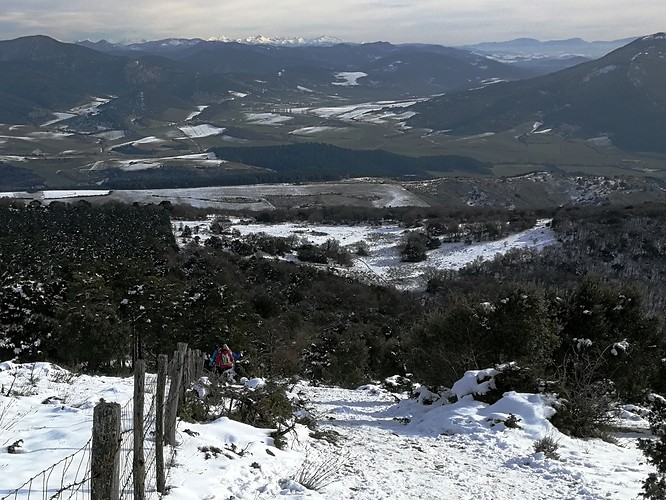 To my surprise, after a carefull inspection of the area were my backpack laid over ground I discovered the wallet appearing on the snow:

I know the feeling. My phone fell out of my pocket on Ben Loyal GM/NS-052 when I stumbled. I only spotted the phone was missing back at the car but I knew it was probably only 30mins walk at most from the car to the point I last had the phone. I had to leave as I had to check in to a hotel. I went back the next day using my GPS backtrack feature and found the phone about 5mins walk from where I parked the car just at the place I remembered stumbling. It was just a phone and could be replaced with ease, just spend money… loosing a wallet with cards etc. is a real pain getting them all replaced.

I know the feeling caused by animals interfering an activation Curious and dangerous cows on motta da sett HB/GR-275.
Great you found your wallet, what a relief. 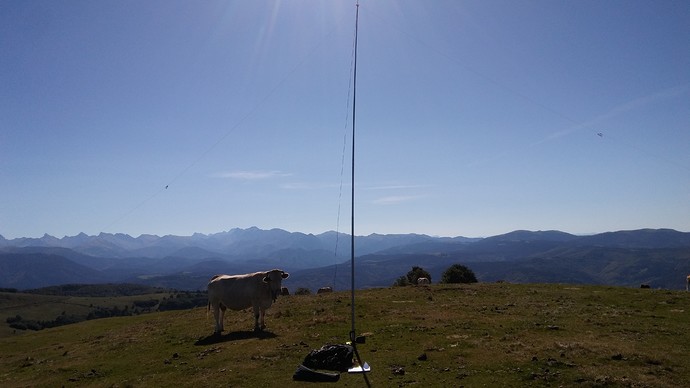 Ignacio even so you have enjoyed and more with good qsos on the other side of the pond, if that were not enough s2s from Canada, congratulations to it was worth it despite the cold
EA3HP
Daniel

Hi on the slopes of Montgomery Peak (WH-002), Calif at 11,400 ft is a Kenwood 144/440 mHz HT that tumbled away down the slate scree and disappeared into the rock crevices. A radio I lost in pursuit of the summit of Boundary Peak. Operating a KX1 at the summit proceeded as planned. 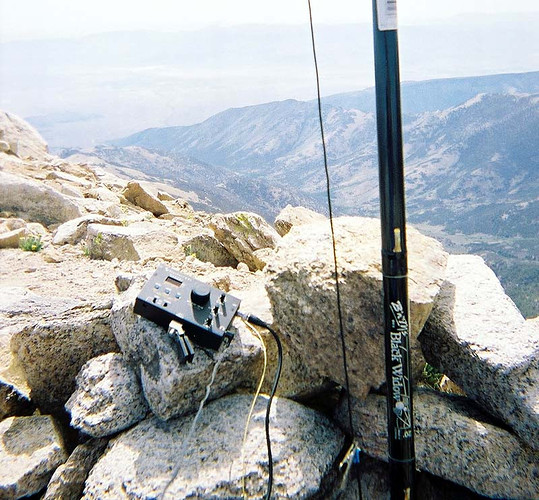 Sometimes 1 pointer can be more difficult then 10 pointer. For example, I activated 1 pointer in Southern California that requires long hike on the road in the desert canyon during the hot weather, then an extensive bushwalking in the dense bushes with poison oak on steep slope. At the same times, some 10 pointers can be easy reached by the car.