Has anyone compared a VX3 with a Baofeng UV3r on 2m on a hilltop? I am wondering how they compare in terms of problems with nearby transmitters?

Hi Richard, in VK where we have pagers starting as close as 12.5KHz above the band, the Baofang and other cheap chinese radios have proven to be extremely susceptible to high RF environments. I cannot speak for the specifically for the VX3, but other quality radios have proven to be far more resilient (albeit not immune) to the same RF environments. Although I think you have different pager bands, I would expect the radios would behave in a similar fashion wherever there is strong adjacent RF (for the cheapies, read very poorly).

That’s what I am hoping. However there is surprisingly little information on the performance of the VX3 on the web. There is a youtube video in Italian on this subject. But as I dont understand Italian I am unable to decide what it is saying.

Hi Richard
Maybe I can help on that. I found a few VX3’s videos on youtube but all of them are talking about the features, including spanish, bresiliens and italians.

Could you let me know the URL ?

IV9GYY made this comparative test between both handies.

He start by saying that the place has a “high concentration of RF” and he was there to test desensibilization.

Turning on the VX-3 showed a full scale QRM noise which make impossible to receive any station. He tries to receive the VHF coast station but nothing was heard.
Then he turned on the Baofeng UV-3R plus and it received the coast station and amateur radio traffic loud and clear.

So, the VX-3 was completely desensitized and is bad radio.
He anticipated those results because, in all cases, the Baofeng showed a superior performance.

From his youtube videos he tried the same with kenwood and Alinco, at least. In all cases, the baofeng proved to be better then the others.
A litle bit odd, in my opinion but I haven’t possibility to do the same set of tests!

A very odd result indeed. I will clearly have to do my own tests! I know that my Baofeng does not perform at all well in the presence of strong commercial transmitters. It is fine in many other situations though.

Thanks for the translation.

I will clearly have to do my own tests!

I use a VX-170 but also have a Baofeng UV82L which has never left the shack! Will start taking both a comparing them against each other.

I have now compared mine. The VX-3 is far superior to the Baofeng UV-3r in terms of rejecting out of band interference on hills around here.

Well… Those results doesn’t surprise me.

My surprise was the conclusions of IV9GYY, but you never know!

Baofeng HT’s are almost worthless if u are near any close RF source. My VX-170 is much, much better. I never use the Baofengs for SOTA unless there are no repeaters within 50 miles that will crunch the front end. I own three of them…they all suffer the same sickness.

The S2S were made using each of those portable radios and their rubber duck antennas.
Test done.

I would think twice before buy a cheap portable transceiver…

There are several discussions regarding ‘bricking a Baofeng’ online. Several members of my local radio club have reported their Baofengs working fine then becoming deaf. The problem is caused by programming your Baofeng from a ‘bad’ file using Chirp. For instance, If my Baofeng was ‘bricked’ and I read from my radio using Chirp, then saved my file and programmed another radio, then that would of course be ‘bricked’ too. Its quite common and is easily fixed.

I’m sure there are cases of inserting saved memories and configs from older versions of software that cause no end of problems with units running new software. However, in this case we’re talking of “working” radios not actually being very good.

I have lots of HTs and i must say… i love my VX-3! Is much broadbanded than Baofengs… and much more features, is natural in one or other band (outside HAM bands) is not the best, but does the thing reasonable good, like a scanner! In other hand is more expensive.

The baofeng UV-3 only work (best) in the ham bands, has slow scan ± the same transmit power and share the battery with VX-3, the reception and audio quality is very similar to VX-3.
I use very often the UV-3 walking in the beach (maritime areas) and made contacts > 30 km.
The UV-3+ is similar to the old brother UV-3 but the battery and antenna is not shared with VX-3 or UV-3… if you want to go out with “low profile ham” and low budget, this is the best choice!
The best Baofeng i have, is the UV-82, very good speaker audio (very loud, the best i have!) and transmition also!
Was a good surprise, but my only complain is the “S” meter, only work full or nothing like a squelch, to make some contacts or talking with friends is very good! 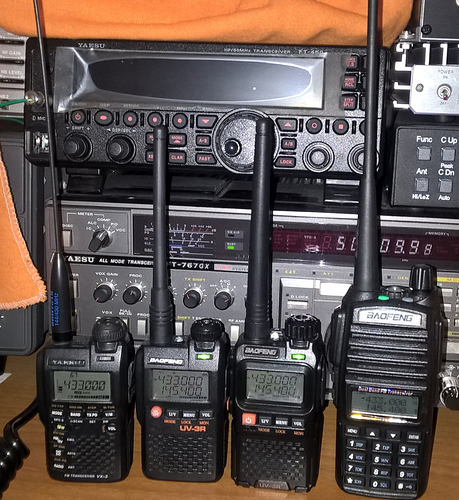 Baofeng UV-3R is a very nice radio for the price, but as others said, it is not very selective. In our city, there are trolleybus lines over major streets and my UV-3R is opening squelch all the time. Japanese HTs keep silent. Suprisingly tramway lines are not causing any problems even to the UV-3R.