Anyone out today in GMLand? 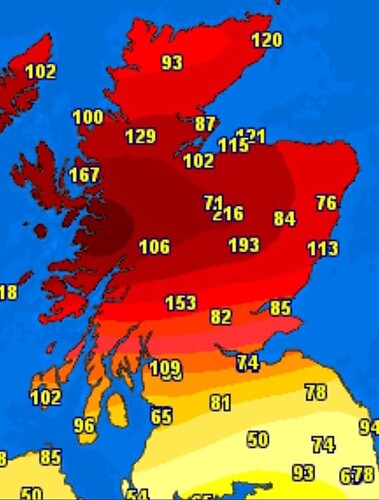 Power has been off six hours now. Got the gas soldering iron out and made a new choke. First time soldering the BNC’s with the open side for the conductor. Really easy compared to the ones where you solder the centre pin and push it through. 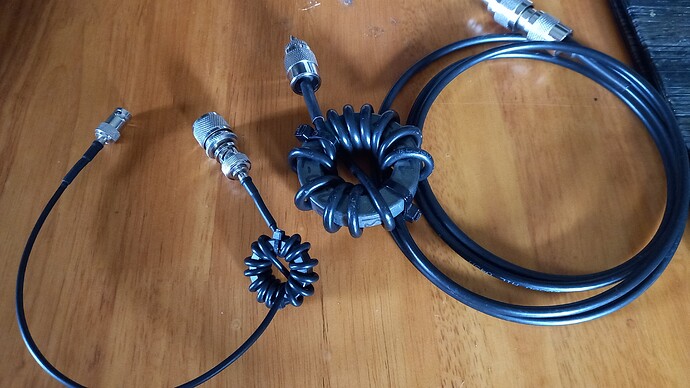 I don’t often need a choke, but at least this one is a wee bit lighter than the one I had been using!

It may only say 74 near me but there are some trees down.

The only reason I can post this is because we had to drive to Aberdeen for Mo’s pre-op. covid PCR test. There are trees down everywhere and we had to use three of the four roads available. Job done and heading home now. At least the electricity companies seem better prepared. Their 4x4 vans and Unimogs are everywhere!

Just to rub it in, where I am there’s barely enough wind to stir the thinnest twigs on the trees, and a clear blue sky.

It’s very windy here in Yorkshire but nice and sunny. I was out yesterday on Fountains Fell G/NP-017 and Pen-y-ghent G/NP-010 and it was windy but I think it is windier here in the valley today. It’s taken down my doublet so it’s just as well most of my operating is activating from summits and not chasing from home.

It’s taken down my doublet

My only aerials at home are a 6m beam, 2m vertical for my digi-peater and a long sloping wire. They all survived Storm Arwen, so I guess they’ll survive anything!

I think this is the windiest it’s been here for a long time. I suspect the wire was rubbing on the apex of the roof and so weakened it. But I won’t know until I get round to taking it down and inspecting it.

The winds subsided this afternoon, the occasional blustery gust but just a little more breezy than normal. It’s been sunny with 75% blue sky. Going to be cold tonight, not too windy in the morning then another ripping wind coming through Sunday evening.

Well I’m back on line. Not on the grid though. I dusted off the 2.8KVA Briggs & Straton genny, fresh fuel and a good dose of carb. cleaner and off she went.

I did it to save binning our fridge and freezer contents for the second time in 2 months. Internet is a bonus!

Took advantage of today’s clement weather to repair the doublet and get it back up. Even chased EA2IF/P - he was very weak and then came out of the noise. Let’s hope the antenna survives tonight’s storm!

I dusted off the 2.8KVA Briggs & Straton genny

… mine got dusted off last time…and ran for 5 days. It now has a new spark plug, fresh oil and fingers crossed we won’t need it tonight ( lots of nearby places are off and it is getting windy again…). ours runs the Fridge, Freezer, Heating, Cooker ( Oil fired cooker) and as of course the teenager essential … internet…and the work laptop … It didn’t even need the carb cleaner. It is probably a very similar generator - 3kw. GL 73 Paul

Thanks, Richard, for chasing me yesterday with your recently repaired dipole. I recognised perfectly your callsign, and although I couldn’t remember your name, I perfectly had in my head the image of that very nice pint of beer you have in your avatar here. Interesting how our photographic memory works…
I activated this drive-up summit yesterday mainly to play with my new birthday gift, which is a mAT-10 automatic antenna tuner.
I tried it with 2 different antennas and my 2 different FT-817 and FT-817ND rigs and I don’t know now which antenna and rig I was using when we made our QSO. I’ll edit this post later to let you know after I had looked to the log.
All in all, I managed to log 57 QSOs, 5 of which were S2S and 10 dx with the USA (8) and Canada (2) on 17 and 20m bands.
A very good crop!
73,

That’s just a stock photo but I do brew my own beer, as well as my own rigs. I was using my homebrew home rig with just 5W into the doublet. Although repaired it’s not quite as good as it was. I need to do some tree pruning. I rarely go on the air at home so it will do fine for now.

It was good to chase you - you are one of my regular chasers so it was nice to return the favour! Sounds like you had a very good activation.

Indeed, I had a great activation but it was a working time also. I spent more than 4 hours at the summit, with a nice sunshine all the time, but there was a gentle, constant, cool breeze which increased as the Sun was coming down, flipping the pages of my notebook and even throwing it down to the ground several times.
I don’t want to hickjack this thread so I think I will open a new one to speak about the tests I did yesterday and in previous days with my new mAT-10 antenna tuner and the problems I found.

I’ve been looking at the log and I can tell you that the antenna and rig I was using at the moment of our QSO were:
Antenna: sloper OCF wire with the sloping 7m longer leg hung from my 7m long telescopic fishing rod at an angle of about 45º down to the feedpoint hooked directly to the mAT-10 antenna tuner without any choke, balun or similar and the shorter 2.1m leg horizontal at about 0.8m above the ground. Its orientation was about 300º to favour NorthAmerican DX contacts. 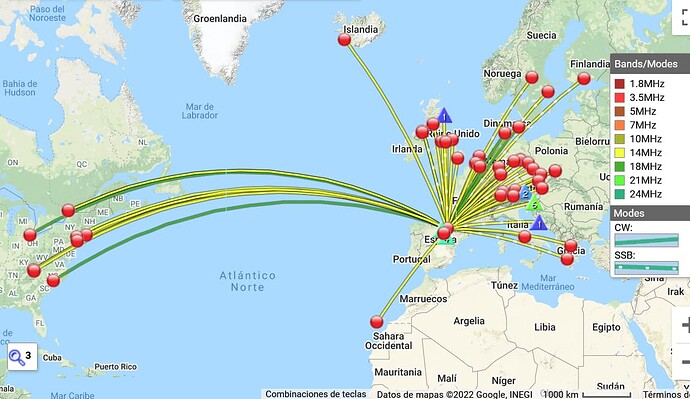 I didn’t make any pictures of yesterday’s antenna setup, but let me post this pic of an identical setup during one of my recent activations of this very same summit where I used the same antenna setup and the same operating spot:

On the other hand, I did make this pic of the rigs: 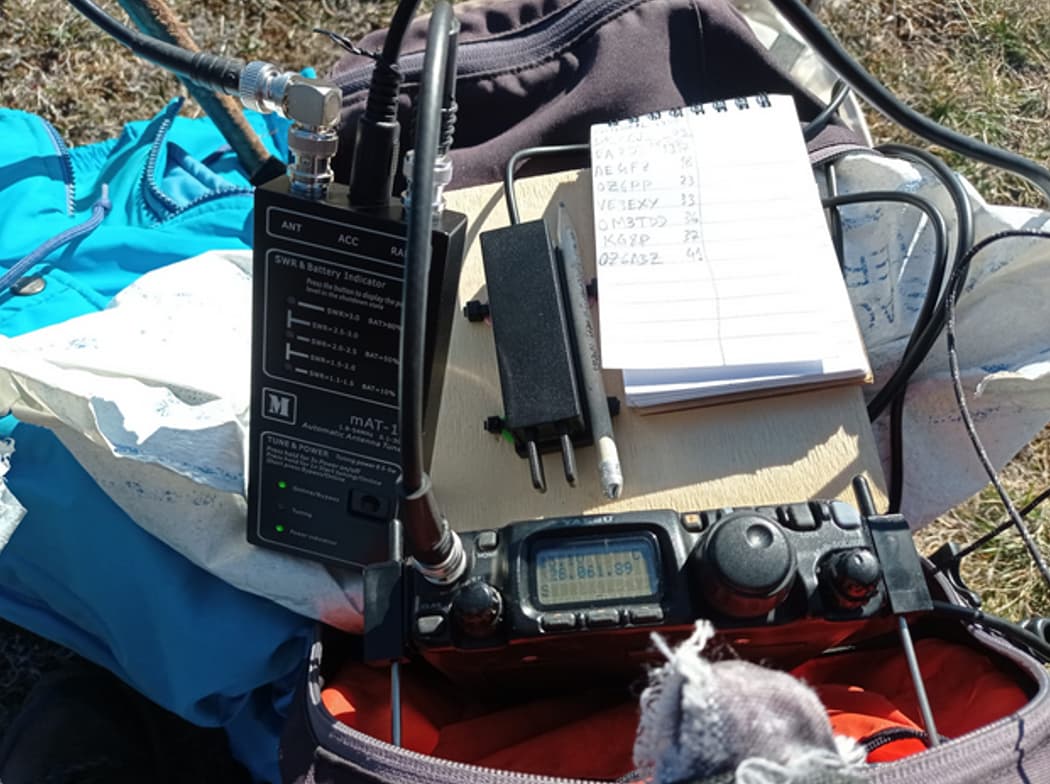 Power still off. Mo and I actually wanted to climb one last summit before she goes into hospital today, Mount Blair or similar.
Can’t get diesel though, as the three main towns along Deeside are all without power.

Had to venture out to get a phone signal for Mo to check hosp. appointment. Tricky on the roads. 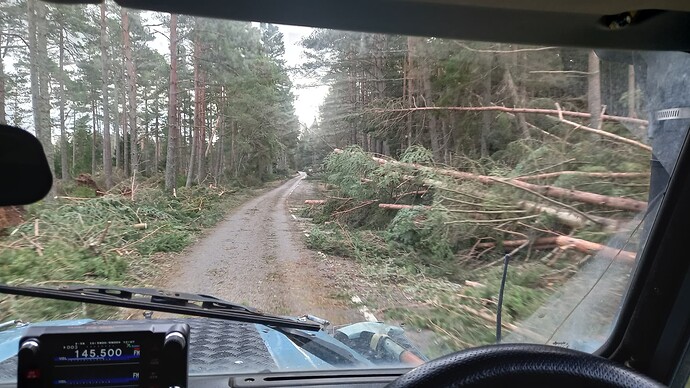 Back at home, our only contact with outside world is the ft-3d, with the streamer it’s sat on being useless. 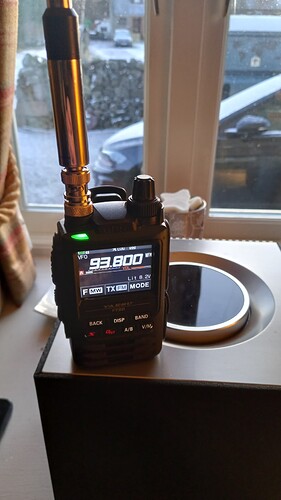 and snapped the aluminium pole holding up the feeder end of the long wire. So, jobs to do at home instead of climbing hills.

It sounded wild here for a couple of hours after midnight. I was quite surprised at the lack of damage or other physical signs this morning (maybe Arwen broke everything weak). I hope things get back to normal for you soon (and best wishes to Mo).

Hope you get the power back on soon, it’s been/is pretty windy on the North coast of North Wales, but no damage at the QTH currently thankfully. I think most stuff that was going to come down, came down in Storm Arwel, my local Sota summit was destroyed by it, so many trees down, it was/is quite the sight. However, the wind here this morning was sufficient for me to can my posted activation today, but hopefully out tomorrow.
All being well, you’ll get the power back on and bag that summit with No. 73 Richie

Thanks Guru, great report and photos.

Day 4 no power. Ended up clearing the track through the village woods yesterday afternoon. Cleared about 16 trees in 200m. More free firewood. Some workout though! 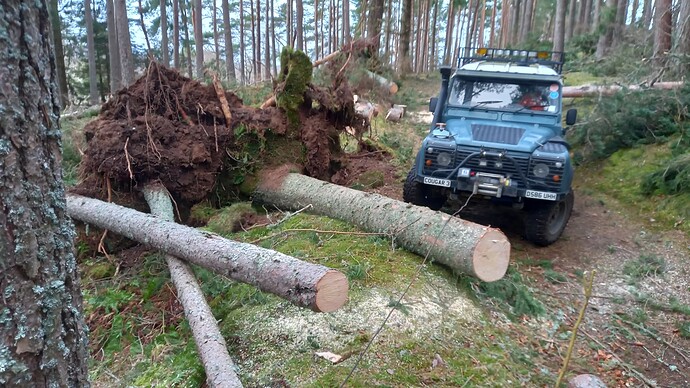 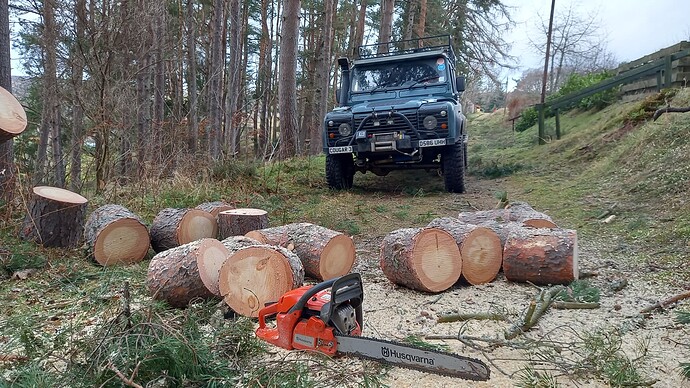 It’s really windy again today…but back at work, so Internet and a million updates from the power company pinged through. Midnight tonight they tell me. We’ll see…