I thought I would document here the results of a test Ken VE6AGR and Ian VE6IXD did to compare Ken’s inverted-V dipole versus a 1/4 wave vertical with 3 elevated radials made by Ian.

The idea of the vertical antenna was to enhance low-angle radiation compared to the dipole, and so enhance long-distance skip for participation in Trans Atlantic or Pacific SOTA activities.

We ran the experiment for 10 hours on Sat April 24. Both antennas were driven by WSPRlite transmitters providing 200 mW of power on a 30% duty cycle. They were started at the same time, and so transmitted on a pseudo-random sequence that is synchronized between the two units.

This allows direct comparison of signal strength at stations receiving both transmissions in the same time slot.

The overall result was that the two antennas provided essentially the same performance!

1800 (+/-15) spots were received from each unit, 1347 of these spots were received simultaneously by other stations, the average signal strength difference favoured Ken’s dipole by 1 dB which was probably caused by Ian housing his WSPRlite inside and feeding the antenna via an extra 50’ of RG58 co-ax. Examination of signal strength difference by distance of receiving station suggested a slight increase (less than 1 dB) at longer distances by the vertical.

Both stations (located in Calgary) were heard reliably in Hawaii, Alaska and all across continental USA. The vertical managed a single spot in the Canary Islands.

The propagation conditions were not great, so we will probably repeat the experiment from a SOTA hill-top later in the summer when conditions are better.

Good work. It’s not clear to me if the antennas were in the same location? If not, the different sites may be a confounding factor. The ideal way to do these tests is on a large open field which you test in advance with identical antennas some distance apart (at least a wavelength) before doing the comparison. I used two identical magnetic loops to characterise the site first. That gives you some good data on what differences might be significant in your results. It’s quite time consuming of course. Another factor to consider is whether differences between the antennas changes depending on the site (hilltop takeoff for example). Using synchronised WSPRlites is a proven way of getting excellent results.

Good work comparing antennas while attempting to hold all other factors constant and consistent for each.

The impact of the extra length of feedline can only be considered when the attenuation at the measurement frequency is known, ideally from measurements.

It would be good to keep feedline lengths and type (example: RG-8X to RG8X) the same (to keep the same feedline losses) assuming reflection coefficients are the same. I also agree with Richard G3CWI that the location also matters (hillside versus flat). I would consider one wavelength a minimum. I did a similar test of two inverted Vs on the same lot 1 wavelength apart and there was a yagi effect from the hillside reflections favoring one antenna and not the other. An open flat field would be ideal.

Thanks for the interest.
To answer the questions, we used 20m. Both antennas were in suburban Calgary but in different places and different terrains. The dipole was in DO30av on flat land for several kilometers, the vertical was in DO21vc in a valley with land rising to about 300m higher on the north and south sides within a couple of kilometers.
So I accept that these factors will influence the results, and I will take the suggestions into account when we try again on a SOTA hill-top.

So the initial look at the results suggested no difference in performance, but the analysis by distance does indicate variation by about 5dB with distance.
Clearly further experiments taking the local terrain into account are worrth while.

Thanks for the feed-back.

Good show and I’m not surprised both antennas are close to the same in performance.

Excelent job. Very interesting. And tells me that both antenas work for transmitting. And something interesting. Polarization is not big problem on hf.
I don t want to change the subject so plese, only short answer. what about local noise on receiving side

Is it possible to analyse results where both antennas were received by the same WSPR receiver? Reason I ask is that to compare two antennas, it would be best to compare the received signals at the same receiving station, rather than going on signal levels at different receivers, which will be subject to differences in receiving situation, antennas, local noise, etc.

How high was the center point and ends of the legs of the inverted V?

Hi folks,
Here are some answers to the questions.
Damir and Andrew, I am using only spots that were received by the same station at the same time. So for each pair the noise is the same and the difference in signal strength is the difference in the S/N ratio.
This procedure is readily done using DXplorer (http://dxplorer.net/).
I was looking up a reference to this method that has been published here before
Two popular SOTA antenna compared
Despite the title, it includes more than 2 antennas, and does compare an inverted-V and a vertical near the end of the thread.

I also found a wealth of information in Richard’s blogs on the SOTAbeams site, including the comparison of an inverted-V and GP antenna.

Comparing the performance of an inverted vee dipole and a quarter-wave...

Thank you for leading the way and publishing the tools, Richard.

Barry, I have asked Ken to respond directly here with the dimensions of his inverted-V dipole antenna.

Hi Barry,
Ken just responded to me. Here is the data about his antenna.

My linked dipole center was up 5.75m on a SOTA Beams Tactical Mini, and the ends of the wire were up about 2.85m, given the 4.75m length of the rope extenders I was using and the inclusion angle of about 53 degrees – see attached pic from the cute little designer tool on the SOTA website … Ground conditions were, of course, wet – lighth dusting of snow on grass after some sleet (mmm, springtime in Alberta …)
Cheers,
Ken Smith VE6AGR Calgary

Thanks Ken! I don’t understand how to see the pic you referenced.

Sorry, forgot to attach the diagram. The design tool is available on the SOTA mapping page.
https://www.sotamaps.org/extras

The image referred to, with the dimensions of Ken’s inverted-V, is here. 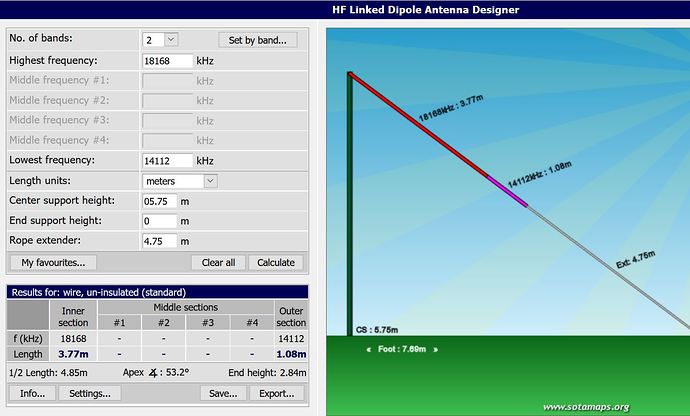 Thanks. This testing, Richard’s article, and the discussion here is enlightening. My personal anecdotal opinion is that the quarter wave does better for distance on 14 MHz for reaching Europe from the south-central US. When band conditions are poor though, I think the inverted V is better for closer contacts. Not scientific other than general understanding of takeoff angles and so forth, but that is my experience using a Sotabeams inverted V, Dipoles I have built, and verticals I have built. I do try to get at least 9 radials on the 1/4 wave vertical.

Maybe try the exact same experiment again however this time swap the locations of the antennas and setup the dipole where the vertical was and the vertical where the dipole was and try again. I know it’s not as good as the suggestion to do it where the conditions are equal but this could at least identify if 1 site has superior ground conditions for example helping one of the antennas.
73,
Paul VK0PD/VK2PAD

Thanks for the idea. I like it.
Unfortunately Alberta is a hot spot for covid-19 infections at present with one of the variants increasing day-by-day.
I have had two shots of vaccine, but my wife has only had one.
So I think I will be restricting activities that involve going to someone else’s house. Indeed, if I do a SOTA activation, still fully allowed in Alberta, I will be choosing an isolated summit and going alone.

Stay safe all you folks out there,

Thanks for the P2P yesterday, glad to give you NW-004.