The xyl wanted some winter sunshine and booked a last minute holiday to Lanzarotte, as this was not a “sota” holiday some delicate negotiation was needed. Having read all of the information on the reflector, two afternoons were set aside, the 9th for Montaña Roja EA8/LA-026, and as the xyl had expressed an interest in visiting the Jardin de Cactus at Guatiza, Helechos EA8/LA-012 on the 10th.
The trip out through Manchester Airport was uneventful, everything was looked at, but there was no undue scrutiny or delay.

Montaña Roja
We stayed in Matagorda, near the airport, it took about an hour to drive to the parking spot for Montaña Roja, the xyl took one look at the rocky track and retired to the car. It took me about 30 minutes to get to the summit, check the gps coordinates and find a convenient hole in the rocks to secure the pole, the ends of the efhw were tied to some rocky outcrops. Unfortunately at this stage I noticed some rf instability, I could not see anything obvious so I reduced power to 5 watts. (later investigation showed the counterpoise had become disconnected inside the matching box)
Thanks to F8AAB for the spot, I made 11 QSO’s in between answering questions from the many people walking on the summit and closed down at 13:34 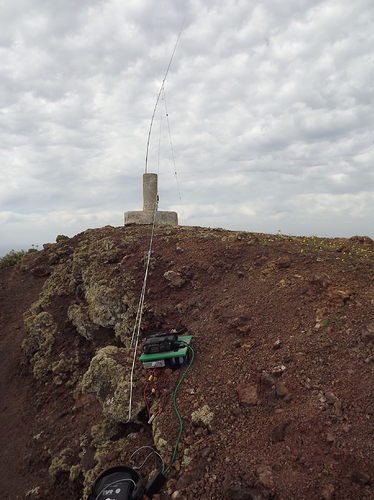 The shack on Helechos, and yes it was that breezy.

It took about an hour to get to the parking spot near the beacon and we arrived at 11:50, I started off down the obvious track towards the nearer summit, but completely missed the path to the left and round it and ended up going straight over the top and down the other side where the easier path becomes apparent. There are some fantastic views once you get on to the ridge that runs up to the summit, it took me about 35 minutes to walk up (it only took 20mins coming down on the right path).
ED1DR was the first contact at 12:40, the first three contacts were fairly leisurely affairs, then Karl M3FEH spotted me and there was an immediate wall of sound, this continued for the rest of the hour and a quarter that I was on the summit, as soon as I was able to pull out a couple of letters things went quiet and I was able to complete the QSO, 50 QSO’s in 75 minutes including battling with the increasing breeze. At times the wind blowing around the headphones made listening difficult, and I had to ask for information to be repeated.
I think it was Mike G6TUH that informed me of a possible s2s, I could tell that there was someone calling but they were just too weak, it may have been Z35BY, but as there were so many stations calling I made the decision to continue working through the pileup. I reluctantly went qrt at 14:00 as I had promised the xyl that we would go to Jardin de Cactus after the activation.
I would like to thank Karl M3FEH and Mike G6TUH for their assistance and all of the chasers for their patience and consideration, I thoroughly enjoyed the activation.

The return trip through Arrecife airport was interesting, at one stage I thought that I was going to lose the LiFePo battery which was packaged in a vividly marked charging bag and had all of its terminals taped, but after reading the label and consulting with her colleagues it was allowed through. All of the rest of the equipment went through without question and we had an uneventful trip home

Thanks for that Guru, I think I had a senior moment when I was writing the report. We had a really great time on the island.

Same good wishes for you and yours, Colin.
I hope I’ll be able to chase you next time.
Best 73 and happy New Year de Guru