My planned trip into the White Mountains was cut short after one night camping. Smoke from the Ferguson (near Yosemite) fire and one or two near Bishop in the Eastern Sierras was just too thick and probably quite unhealthy to be in.

Over night at our camp site at 10,000 ft when the wind dropped the smoked seemed very pervasive.

I’ll do some trip reports on my blog but for those who might have wondered what happened to my White Mountain extravaganza, it was smoked off. 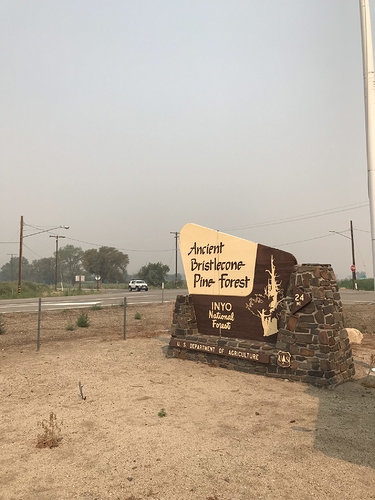 This is from highway 395 and 168 at Big Pine looking into the Sierra Nevada mountains about a mile away that tower up as sheer granite wall 6-8 thousand feet. Lost in the smoke. It seems as though 100s miles north/south of the Eastern Sierras (including the Sierras themselves) are blanketed in smoke.

By contrast I activated Reversed Peak in September 2015 while the Rough fire burnt in the Sierras with no where near the impact. Bad times in California with fires right now and the one further north near Redding is a monster.

This is within the White Mountains looking north (fire is far to west).

I did manage 3 activations but needless to say I’m a little bummed (thats American for disappointed…).

Sorry to hear about the smoke Paul. The White Mountains are one of my favorite places to SOTA. So many peaks, so little time

Agree they are really unique and beautiful. The transition in terrain and vegetation from the scrub and Bristlecone Pine to the desolate and moon like of Boundary is hard to beat.

Maybe I’ll get a chance in November before the snow sets in.

Sorry about that Paul; yes, the right thing to bug out and quit breathing that stuff. As Kay points out, the mountain will still be there later. On the plus side, you’ve inspired a lot of potential activators to go check out the White Mountains in California.

It’s so bad out here now that the smoke has even settled in the Great Basin area of northern Nevada. Coming thru Winnemucca earlier tonight was like running the train through fog, and Elko isn’t much better. My little home town in NorCal has been socked in with smoke the past few weeks. Kinda like the Tule fog of the central valley of California that I grew up with…Glad I was able to work you a couple of times Paul and I look forward to your excellent trip reports/stories. One of these days, hopefully before I retire, I can get up in that area. It’s been on my Radar as well for a long time. Can’t believe I still haven’t visited the Ancient Bristlecone Pine Forest…Be safe out there…73, Todd KH2TJ

Thank you for the S2S from W6/WH-008 on Saturday! I was on Mount Sherman W0C/SR-061. We had some smoke and low visibility in Colorado from your fires and our fires. Saturday night we had some rain and visibility was great on Sunday. I however was doing communications for a burro race in Leadville and not hiking for our 14er event on Sunday.