it’s very interesting what you write, thank you! - Could you additionally give the name of your carbon poles? Carbon poles seem to be quite different. 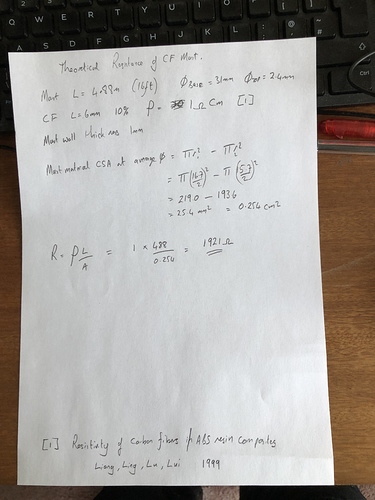 And that assumes no additional resistance due to the sliding joints.

Thank you for your calculations - your general assumptions seem fine, and if the resistivity of carbon fiber in our various poles is close to 1 ohm cm, these results center and improve this discussion.

Since I wrote my post above, I decided to measure the DC resistance of an entire carbon-fiber pole. I used a reliable Fluke 77 DVM and sharp-pointed probes. The probes were pushed through the lacquer/coatings when required. There were several interesting surprises:

I believe that how the carbon fiber fabric is laid and layered explains the measurements I see here. I suspect that the larger-diameter sections have more layers of material, since they are required to bear more force lower down on the pole; perhaps there are one or more insulating layers between the carbon-fiber layers.

Based on these measurements of pole sections, none of my poles have measurable conductivity along their entire length. Because the OUTSIDE of the bottom of each smaller section mates with the INSIDE of the next larger section, conductivity along the entire pole will not occur unless all sections conduct from the inside to the outside, which is not generally true for the larger sections.

After I had put my poles and meter probes away, I realized that the situation is NOT as simple as it seems so far…

Even if a pole section does not conduct DC from inside to outside, because of an insulating layer or layers, for RF we must consider Capacitance!

I measured several of my larger pole sections that have no measurable DC conductivity between inside and outside. I found capacitance on the order of 350 to 450 pF, when measuring from the inside to the outside of these sections. Each is a coaxial capacitor.

The reactance of these capacitors is approximately 28 ohms at 14 MHz, and 56 ohms at 7 MHz, so RF will flow through the insulating layers and flow through the entire pole after all, even if there is no DC connection along the entire pole. I have no information on how lossy the dielectric material in the pole fabric is, but we still have RF current running through the somewhat lossy graphite regardless.

Also no two poles are quite the the same, and we have a lot of variables to measure and estimate. The combinations of L, C, and R, along with the dimensions of the various pole segments, some with different cross-connections than others, create a complex set of circuits at various RF frequencies.

Despite my over-simplified description in the earlier post above, I stand by most of the conclusions!

We should go ahead and enjoy the benefits of lightweight carbon-fiber poles, while trying to keep our wires well away from these poles, and not worry much about the inevitable losses that may exist. These poles have been proven to work incredibly well in the hands of competent SOTA activators!

If carbon fiber seems too tricky, revert to fiberglass!

Every portable antenna system has many other significant losses:

The key thing to take away here is that the various carbon-fiber pole sections are often not built the same, so gross assumptions may be misleading. I surely was surprised this morning!

Your results almost certainly will vary…

Just posted a short video answering some of the questions raised by my tests on the Carbon-6 mast. https://www.youtube.com/watch?v=5Zh0YLDazdM

When I first started in SOTA a match fisherman friend gave me a spare carbon fibre pole. I was concerned about its possible conductivity but when I tested it with an AVO 8 I found that I could not detect any conductivity at all, measuring both longitudinally and transversely on cleaned edges and surfaces. Unfortunately it did not survive a winter gale so I cannot identify it. According to Wiki some carbon fibre composites include aluminium and I guess that this type of composite would be more conductive.

Interesting video! The bung in the Carbon-6 pole seems to have a devastating effect - presumably loaded with Carbon Black…

From papers I’ve read related mainly to the aeronautics industry, lack of conductivity of carbon fibre composites is an issue and additives are used to improve it. It could be that not all carbon fibre poles are created equal when it comes to conductivity… Though given that contact with overhead power lines is a well-recognised hazard I’d imagine most fishing pole manufacturers would aim for maximum resistance!

Richard, I sometimes use pultruded carbon fibre tubes (for their cryogenic thermal resistivity). Despite the co-alignment of the fibres these apparently have a similar dc resistivity, within the range from Liang et al.

Anecdotally, colleagues of mine were, some time ago, using mirrors made of carbon fibre for work at Ka band (26 - 36 GHz). They had some trouble with the aluminium coating. IIRC it eventually came off, and the bare CF was about as good. They replaced them with better mirrors finally, of course.

The world is not perfect …
I know that the RG174 coaxial cable has more losses, I know that my dipole vertice is only 5 meters from the ground, and I also know that carbon fiber mast is conductive and should have a small influence on the performance of the set. …
But SOTA is also climbing peaks, carrying a backpack, having mobility, etc. What matters if the cable losses if it is light, what matters the height of the mast if it is easy to carry, what matters if the mast is conductor if it is cheaper?
In my opinion, there are details that don’t matter when working /P