Where have all the telescopic poles gone?

I bought my first 5m telescopic fishing pole back in 2002/3, a Shakespeare brand item and it was a long time before I became involved in SOTA . It was waiting for me when I started SOTA. It was a 5m 5 section mast about 1.15m collapsed and it did well over 500 activations before I destroyed it reversing the car over it.

Once I realised how much I liked SOTA I bought a similar 5m Lineaffe item a year into SOTA so I had a spare. It too was destroyed in the reversing incident

In 2012 prior to a trip to Madeira I bought a travel 5m mast on Caroline G6WRW’s recommendation. That is 57cm collapsed and fits in a suitcase when flying for SOTA activations. I still have it and it has been to Canaries, Madeira, Czech Republic, Poland, France, Luxembourg, Netherlands, Germany, Switzerland, Austria and Lichtenstein and is still going strong 10 years later.

After the reversing incident I used this travel pole and realised how much more convenient it is to have a compact pole on the side of the bag. I followed Phil G4OBK and Victor GI4ONL’s advice and bought a compact flag pole. This is 5m extended and 57cms collapsed but is designed for flags. It has a 6.5mm diameter ferrule at the top and 5.5mm top section which is much thicker than normal fishing poles. It’s brilliant and weighs bout 450g. I thought how my activating was designed around 5m poles and this size so I should buy a spare. None in stock since Easter 2021. They expected more in May 2022 but the items are no longer on the supplier’s website

I did some searching and found effectively no suppliers of these poles any more, either fibreglass or carbon fibre fishing poles or flag poles in the compact sizes. Apart from Decathlon who have 5m and 6m compact fishing rods and picked up a 5m version as Decathlon would ship that to my local store for collection. It looks to be the same strength construction as my original Shakespeare which did 500 activations and is light at about 280g. But it is much thinner than the one I use now. I thought about punting for a 6m version and not using the top section but Decathlon would not ship 6m poles to my local store.

So I know Sotabeams sells a 6m travel pole but it is a bit pricy compared to Decathlon’s item (£45 vs £17). It’s heavier at 800g. There is a carbon fibre version at the same price weighing 300g but is out of stock. Apart from these and Decathon’s items I can’t find any other 5m or so poles. I have a very flimsy Chinese pole (order the 6m version to get something about 5m long) but that really is for lightweight vertical antennas.

Where have all the poles gone? Or am I searching with the wrong terms?

Recently bought several from aliexpress and similar. Opted for 7.2m pole, which reduces to 64cm.

The top few segments are useless, but it is much lighter than the sotabeams pole. These work fine for wire dipoles.

The diameter of the poles do vary…the last couple bought were a few mm thinner than the first two I purchased. I have one of those thanks Matthew, I seem to have edited out the bit about it. I bought a 6.3m version which is about 5.5m long as the 5.4m version was well under 5m. They must have used a Chinese tape measure

It’s uber flimsy and I use it as my second mast when I do a uWave operation and need HF, uWaves on one pole and 2m vertical talkback on this one.

Where have all the poles gone?

Err…they’re all in my shed.

Maybe I can start a hire business.

A while ago I walked into my local fishing tackle shop and walked out with a 6m roach pole, they were happy to sell it to me as none of their customers wanted a fibreglass pole, they all wanted carbon fibre. I got it half price. Perhaps a tour round your local fishing tackle shops might yield something useful. On the other hand, a look at the Go Outdoors catalogue shows a 6m whip for £54.99 and an 11m gangster pole for £74.99.

I Have just been into the new Go Outdoors store in Derby, no roach poles, but they were selling these rocket poles which looked absolutely tiny!

I have a 10M Windjammer pole but seem to have lost the top section, I use it with the SOTABEAMS Band-hopper IV, The biggest issue is the Windjammers’ weight plus the weight of the Band-hoper IV. SOTABEAMS say the antenna needs to be at 6M to work properly, but it is too heavy for most 6M poles, including all that SOTABEAMS sell.

The biggest problem is it requires a ground stake and the only thing I can find that is big enough is the ground spike for a rotary washing pole, unfortunately, this is no good if you are on hard ground in the summer, there is no way trying to put it up with guylines alone as it is too heavy!

Actually, the Band-hoppers problem isn’t its weight which is quite reasonable, it is when it is in the air, it catches the slightest breeze! Which adds massively to the load-bearing of the pole. It’s a great antenna but takes a bit of thought in its use.

I also use the Windjammer to put up various Hawkins Thunderbolt 5/8 wave flower pots (10M, 6M, 4M) the issue here is the weight of the coax. 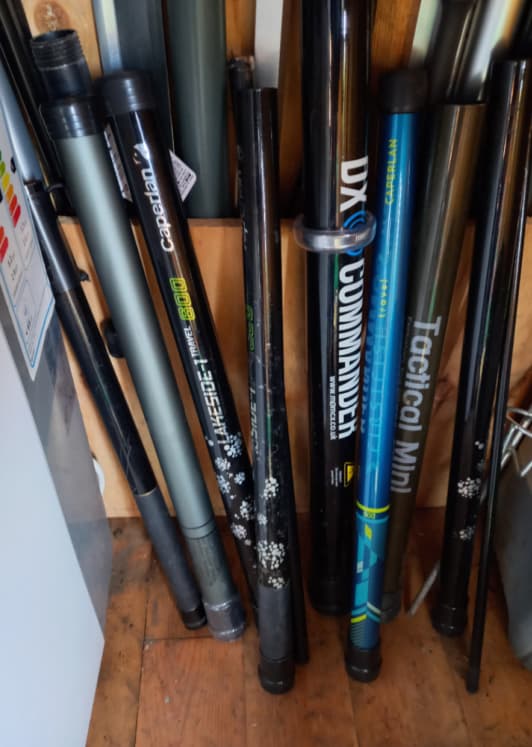 lambdahalbe still sells 5 & 6m poles in Germany and I can recommend these. They’re cheap but good quality, light and pack small. €28 for the 5m and €36 for the 6m.

Unfortunately, they don’t appear to be going to Friedrichshafen this year. They usually bring stacks of these masts and sell out in the first couple of hours!

73 Ed.
UPDATE: another company in Germany, worth looking at their products is DX-Wire. I have some of their 10 & 12m poles supporting my Skyloop antenna here at home. They also produce the 10m travel mast (not my favourite). https://www.dx-wire.de/

I have a fine collection but some have been in stock for many years. It was the fact there were so few on offer that struck me. I’ve broken them by driving a car over 2 poles, that’s all so far but I’m still trying/

Fullsize (1.15m or longer when collapsed)

Compact (60cms or less when collapsed)

I also balked at the 6M SOTABeams price and am looking for alternatives, so this is a welcome thread.

I have used an end-fed with the 4M pole I use for 2M Slim Jim work, but I need to get more height.

Will check out some recommendations here. The packed size is important to me.

A common comment above is that the light cheaper poles are actually not fit for this purpose. Spend a little more and get what actually will support an antenna. You’ll only need to buy it once unless you practice reversing over them, a sad tale Andy.

The better quality poles have some strength in the top section. Thats the clue to choosing a pole suitable for supporting wire antennas.

I’m very happy with my 6m travel pole from sotabeams.

Might be showing my age but the first telescopic mast I got was a DK9SQ 10m mast. I still have it but its getting a bit fragile now so just used in the garden for experiments these days. Was pre sota and used in Austria and portable in the UK. Hill forts were a good option in those days and also served another of my intersts. Still find them interesting places to operate from.

I have 2 of them but one is in a bad way now. But boy are they heavy!

As you know, I’ve only been an activator for the past 9 months, but I do have a nice collection built up in that time:

I find my 4m poles to be ideal. I’ve chopped a foot off one which I call my windy pole

I use this when on summit with strong winds so it sits straight, and the other is full length which I use all other times. The lengthier poles don’t get used very often anymore, as the 4m one will hold my linked dipole and the radio tunes it up nicely! Great and compact when on summit!! That’s my piece added to the mix @MM0FMF

UPDATE: another company in Germany, worth looking at their products is DX-Wire. I have some of their 10 & 12m poles supporting my Skyloop antenna here at home. They also produce the 10m travel mast (not my favourite). https://www.dx-wire.de/

I’m using such a travel pole but removed the lower 3 sections. The pole is reduced to 7.5 m and about 50…60 % of the weight. In my oppinion it works fine.

How do you cap the ends then, Ludwig?

Ahoi from the Westend
Pom

I’m using such a travel pole but removed the lower 3 sections. The pole is reduced to 7.5 m and about 50…60 % of the weight. In my oppinion it works fine.

I used this solution for a long time in the “pre-carbon days”, the usable height for non-vertical antennas is 6.80 m and it weights 740 g.
Well usable, but significantly less stiff than a (lighter) carbon mast.

Edit
Of course, the mast is always put in the backpack with the cap down… 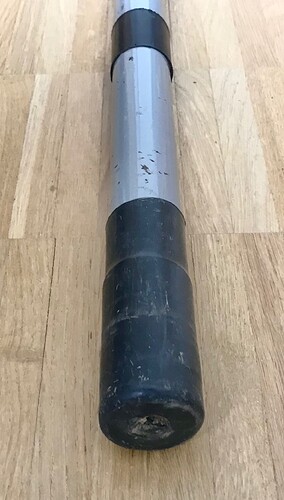 Replacing caps on my poles is about 6 times I recon. Walking through the bush in vk they get lost from brushing under bushes etc. Lost one in the hollow log I was sitting on one time, Hugh never gave up looking for it and found it fell in a crack in the log during the activation. I am down to one original rubber cap and I found an olive oil bottle lid with the thread scraped out fits nicely as a cap for my latest pole, so I always carry a spare bottle cap in my bag. I mostly use a SOTABeams carbon pole or a 6m tall pole made up of 3 other broken poles from days gone by.
All good fun.
Regards Ian vk5cz …