Looking up some places on streetmap.co.uk last week (someone wanted to know which WAB square I was in at some point) I came across a reference to what3words…

Looking into it further, I ended up at https://what3words.com/about/
Complete with an app (at least for android) it can apparently pinpoint your position to a 3x3m square (although it did think I was sitting in the middle of my driveway earlier, but that could be GPS not working through my roof…

This could be useful, maybe, in emergencies, for example, one of my daughters friends slipped on the Wrekin, and unfortunately broke her leg. Boyfriend called for an ambulance, and they asked for a postcode… “um, we’re on a path up the Wrekin, no idea what the postcode is…”

Of course, we could then have a ‘Worked All What3words’ award, although that may take a while to complete!

GPS wise, apparently Navmii GPS World (probably others too) support what3words too, I must give it a try.

Of course, we could then have a ‘Worked All What3words’ award, although that may take a while to complete!

Yep 57 Trillion squares could take a while!

Interesting service Don. Perhaps we can get all the sota summit locations changed from three words to the SOTA reference???

What on earth did we do with out it in past, let alone now.

I use these two sites on PC to work out me WAB squares and of others and Squares I could be going to prior to departing the shack. Plus if you tap on a UK Sota ref and its page comes up it has the WAB code BUT its first to letters and then note 1st and fourth Number

For i have sussed out couple Interesting WAB squares within Cornwall one in SX44 to which is 90% water and 10% land well sought after and another one in SX14 to which is 1% land and rest is water and bit of a walk to reach down a nice coastal path. And if one moves a couple yards can be in one of four WAB squares in nigh on same area.

An intriguing idea… it takes a “hard” concept, a lat/long and makes it easier to remember, with a massive proviso.

Except it seems awfully English centric. If I speak Hindi or Urdu having something that only displays English words is not any use. So they would need to offer a translater than takes 3 English words and offers something in French, Swahili and vice versa. As long as your smartphone and/or network is working you can convert from a phrase that is memorable (for English speakers) to something you can look up on a map. As everybody doesn’t have this your going to spend a lot of time de-three wording it to something everyone else can make use of.

Can you guarantee the phones and network are working say in Fukushima after a tidal wave when you want to locate people. Assuming you have a Japanese version that is.

What on earth did we do with out it in past, let alone now.

Simple answer, Karl - I have a shelf in reach of the operating position stacked with mainly 1:50,000 OS maps!

Except it seems awfully English centric. If I speak Hindi or Urdu having something that only displays English words is not any use. So they would need to offer a translater than takes 3 English words and offers something in French, Swahili and vice versa

We have rolled out our 3 word address system in 9 languages: English, French, Spanish, Portuguese, Swahili, Russian, German, Turkish & Swedish. We are adding to those every month and are currently working on Italian, Greek, Arabic and more.

The 3 word address in one language is not a translation of the 3 words used in a different language version and you can use the language you are most comfortable with.

Apart from the fact that I always carry a handheld GPS, which will give me my location either as BNG or Lat/Long, I also use the Android app LocSMS 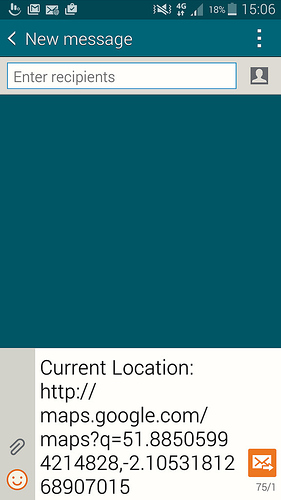 This creates a Text message with a link to your position directly on Google maps.
It takes the hassle out of giving people directions to find you!
It’s also simple to send the txt to 999 (assuming you’ve registered your phone) so the emergency services can pinpoint your exact position quickly.

All this assumes that you have mobile coverage, the GPS constellation has not been destroyed by solar flares and you don’t have a flat battery

What a clever idea. I once worked in a capital city that had no road names. Getting around was easy enough but finding places was challenging. No-one could give you an address so the location was descriptive with the only point of reference being a series of large roundabouts.

only point of reference being a series of large roundabouts

Which one of those is a capital city Andy? Of course, you should know that Richard lives in Macclesfield, once described as “Land of Silk and Roundabouts” on Coronation Street. However, that is not a capital city either. So where could it be? Well, I know “a man” I could ask…

Yes, but I didn’t quote the capital city part.

I do remember the number of roundabouts in Macc. but the number pales into insignificance should you visit Livingston. Roundabouts are named there. I can remember telling Mrs. FMF how to get to the household waste site there once. “Straight across the first 12 roundabouts, then right at the 13th.”

I do remember the number of roundabouts in Macc. but the number pales into insignificance should you visit Livingston.

Yes Andy but it’s not the quantity, it’s the quality you should appreciate.

Some towns even have “Magic Roundabouts” such as the one near my office in Hemel Hampstead. Most folks get lost on it first time around.

How many roundabouts can you see in this picture of the one in Hemel? On the west side of Fort Worth, TX, you can find the Benbrook Traffic Circle. It is a bit large to be called a “roundabout”. The center is about the size of a Cricket field.

I’ve driven round that Hemel Hempstead one a few times. Much preferable to the more local one to me in Swindon!

I didn’t know Hemel Hempstead had them. It’s the one in Swindon I remember.

Just as well that I live in the North of England. I wouldn’t know where to turn with these examples. And I thought spaghetti junction was complicated but that pales into insignificance compared with these. What is the accident rate?
Jim Remember them putting this one in and the chaos it first caused but not me, Loved moment from first time in, if one way looks busy go the other way simple’s. But end of day it seriously improved the road going to the biggest estate in area and route to Clacton via the inner bypass of Colchester.

My first encounter of one of these magic roundabouts was on the intersection of the A127 and A13 in South Essex. Just past me car driving test in Suffolk and had to go to Tilbury for me first job as a 12Ton TK12 Bedford Lorry Road Construction sweeper as a driver back in 1988. Holly poop, mind you no one got in my way in that tatty old green machine was lot bigger than most other road users.

Err… That’s a picture of Hemel Hempstead Karl… i.e. the one I posted above.

I didn’t know Colchester has one too I had only heard about Swindon.

Err… That’s a picture of Hemel Hempstead Karl… i.e. the one I posted above. 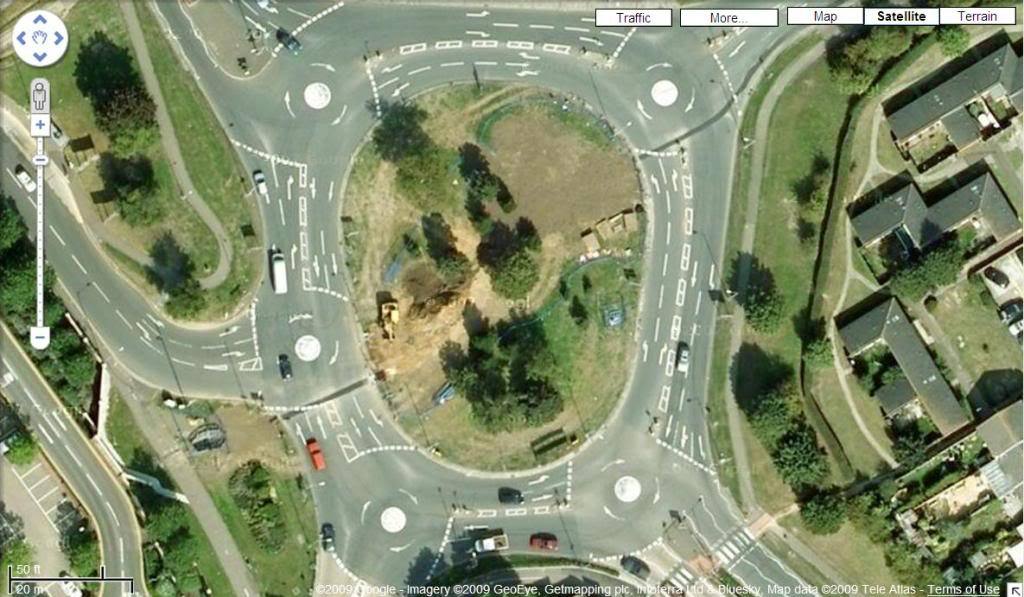 Now this is the original one before they built the Tesco,s on the corner few years later,s

That was my point Karl. You had reposted the Hemel picture with the 7 roundabouts (count them)… and your updated one above has 6.

Not surprising that people get lost on them. New employees at my office who come from abroad are all given a one hour driving lesson that just covers the traffic system in Hemel… mainly the Magic Roundabout.