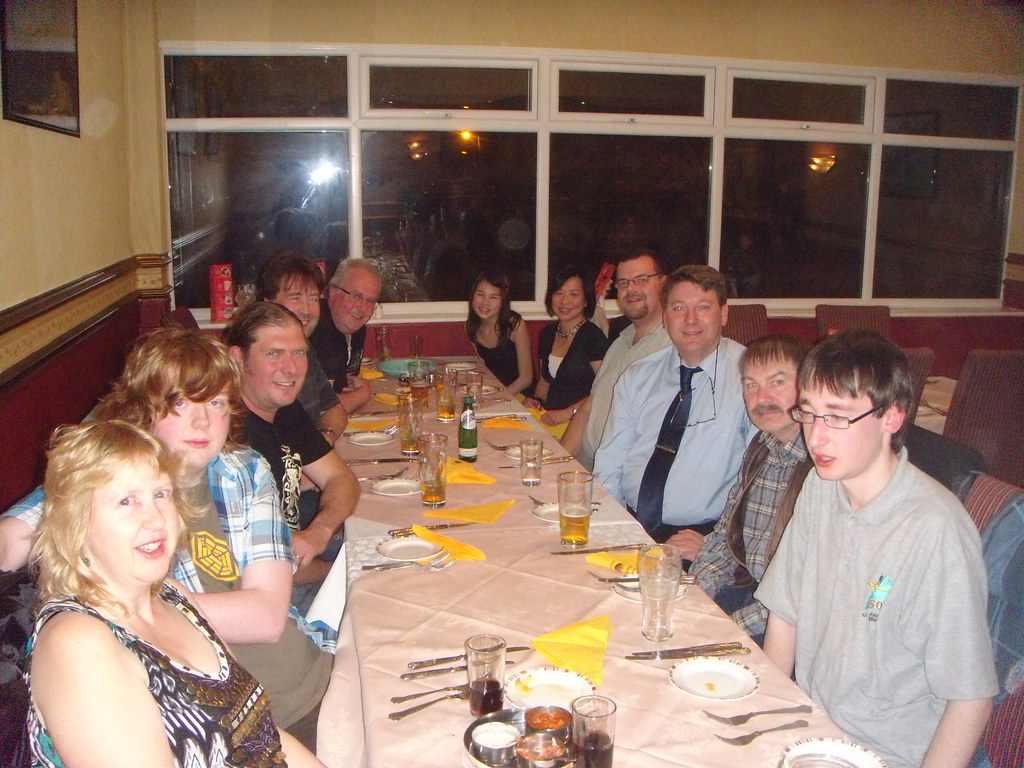 Nine SOTA activators around one table in a curry house - is this a record?

The action on Thursday 21st October 2010 began for me watching the SOTAwatch Spots at morning break time. I wondered if Mads, Aage, Kjell and Halvard would make it up Shining Tor G/SP-004, as Dave M0DFA had just posted a cancellation for the same summit, citing poor weather. However, the LA team were soon spotted, and after a bit of a struggle I managed to work Aage M/LA1ENA/P on 2m SSB from my classroom, signing as M1EYP/A.

When I checked again at lunchtime, and the guys were on Gun G/SP-013, I tuned in but could not hear any signals. But this did confirm that it was worth me heading home via The Cloud G/SP-015, as that would be about the time they would get there as well.

In actual fact, I got to Cloudside first. The only other car parked there was clearly not a hire car that had transported four radio amateurs, so I hung around. A few minutes later, Aage LA1ENA, Halvard LA1DNA, Kjell LA1KHA and Mads LA1TPA all arrived and we soon started walking up to the summit.

Kjell set up for 30m CW, Halvard for 20m PSK31, while Aage and Mads were sharing a 2m SSB set-up. I dawdled around for a while after spotting that my 20m groundplane vertical (MM20 - Magic Moggy) was broken, and beyond any realistic hilltop repair. However, Aage kindly offered me his 40m dipole, which I accepted. I felt a bit cheeky, what with having a car full of HF aerials down at Cloudside. Why oh why did I bring up the only one that was broken?

I made nine quick contacts on 40m CW, but was simply enjoying the experience of The Cloud being mass-activated by international visitors. Of course, their visit did little for the campaign for Holtankollen LA/TM-049 to be SOTA’s most activated summit!

Everyone had qualified the summit, and was packing away, except Halvard LA1DNA who had not enjoyed any success on 20m PSK31. On the VX7-R handheld, I fired up some interest on 2m FM, and Halvard came up to the topograph to work his four on his own 2m hand-portable.

After descent, the LA lads followed me as I drove across the country lanes for the most direct route back to their hotel in Macclesfield.

After a quick shower and change at home, it was back out again to that legendary SOTA eaterie, the Weston Balti Raj. I understand Kjell was keen to sample traditional British cuisine, and you can’t get much more British than a curry can you?

I had booked a table for 14, and the roll call was Richard G3CWI with XYL Wee Wah and daughter Mai-Ling, Greg 2E0RXX with XYL Louise and son Liam M3ZRY, the LA team of Mads LA1TPA, Kjell LA1KHA, Aage LA1ENA and Halvard LA1DNA, plus myself M1EYP with XYL Marianne and sons Jimmy M3EYP and Liam. It was quite a SOTA gathering with nine licensed activators and two Association Managers present!

The excellent food went down well, accompanied by the equally excellent Bangla Beer. It was a most enjoyable occasion, which Greg 2E0RXX and myself continued in the Rising Sun pub with the LA team, the bar being adjacent to their hotel accommodation.

I hope our Norwegian visitors continue to have a good holiday; it is always good to jointly activate and spend time with them when they are here.

Thanks to all of you for a very nice evening! We really enjoyed your company. Hope to meet you again next year.

Our sota and G-QRP tour to England and Wales gave me many nice experiences who I will keep as good memory’s. All the HAMS and their family I meet was most friendly against us. I was glad that M1EYP Tom took the trip with us up to The Cloud. It is a nice summit and the view from there is FB. The antenna hangers we have on Holtankollen is more practical, but the trig point was for me to use this time and this gave me a superb operating position.

Tom kindly drove in front of us all the way to our hotel.
I want to thank all for a nice evening with great food and good company.
The time passed so quickly and I hope we meet again in the future so we can share time together.
Tanks for letting us know your family’s as well.

Photos of the LA activators on “The English Holtankollen” are now online:

(They are down at the bottom of a long page).

In reply to M1EYP:
A missed event for me this year, Looks like everyone had a good time.